A new manufacturing method of twisting nickel titanium wire to produce rotary nickel titanium (RNT) files has recently been developed. The aim of the present study was to evaluate whether the new manufacturing process increased the angular deflection of RNT files, by comparing instruments produced using the new manufacturing method (Twisted Files) versus instruments produced with the traditional grinding process. Testing was performed on a total of 40 instruments of the following commercially available RNT files: Twisted Files (TF), Profile, K3 and M2 (NRT). All instruments tested had the same dimensions (taper 0.06 and tip size 25). Test procedures strictly followed ISO 3630-1. Data were collected and statistically analyzed by means ANOVA test. The results showed that TF demonstrated significantly higher average angular deflection levels (P<0.05), than RNT manufactured by a grinding process. Since angular deflection represent the amount of rotation (and consequently deformation) that a RNT file can withstand before torsional failure, such a significant improvement is a favorable property for the clinical use of the tested RNT files.

Rotary nickel titanium (RNT) files became commercially available in the early 1990s for canal enlargement, and today RNT methods predominate, due to the following primary benefits: predictability of the final canal shape, and relative ease, efficiency, and safety in creating these shapes, compared to previous techniques [1, 2]. The unique properties of the nickel titanium alloy are much more favorable for the endodontic use when compared to stainless steel, which has traditionally been the alloy used for the manufacture of these instruments. Increasing flexibility and resistance of RNT is a main goal, because instruments can negotiate more easily curved canals, while mimimizing the risk of iatrogenic errors (zipping, ledging, transportation) which were very common when rigid instruments were used in complex anatomies.

The use of RNT has also enabled more centered canal preparations and fewer canal aberrations during preparation due to the favorable mechanical properties of the alloy and the improvement in RNT design [1]. It has been shown that, depending on the design of RNT files, they can be more or less efficient and more or less resistant to breakage. A recent large cohort study on one RNT file (ProTaper) found a separation incidence of 2.4% and found that the files could be used at least four times safely, with the size of the file influencing the number of uses [3].

Fracture is a result of either excessive torsional forces or flexural failure (cyclic fatigue failure). Torsional fracture resistance is a function of rotational speed, cutting efficiency of the file, degree of flute engagement against the dentin walls, how much friction the file encounters as it rotates, and the ease of channeling debris out of the canal inherent in the file design and tactile use [4]. Flexural failure is a result of the tension experienced on one side of an RNT file and the compression experienced on the other side as the file rotates in the canal. Both flexural failure and torsional failure can occur along microcracks that act as focus points and that are the result of the grinding of nickel titanium. It is a combination of these two modes of failure results in RNT separation and file fracture [5]. File fracture can be the result of the properties of the alloy itself, which are also strongly dependant on the manufacturing process, and/or the clinician's technique.

Commercially available RNT files have been always manufactured using a grinding process. The process of twisting has been used for decades to fabricate stainless steel instruments, but it was previously thought to be an impractical method for RNT manufacture. To the contrary, SybronEndo (Orange, CA, USA) has recently developed a manufacturing method of twisting nickel titanium wire to produce innovative RNT files (Figure 1): the twisted files (TF). Theoretically, this new manufacturing process should overcome the problems associated with a grinding process, which previously limited instrument strength [6]. 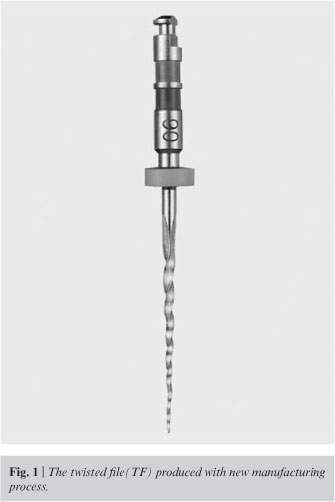 Testing was performed on a total of 40 instruments of the following commercially available RNT files:

All instruments tested had the same dimensions (taper .06 and tip size 25). The size was selected, being the most frequently used as a master apical file. Test procedures strictly followed ISO 3630-1 [8]. A file testing apparatus specifically designed for endodontic instrument evaluation (MAGTROL FTS-100, Buffalo NY, USA) was used to perform the test, in accordance with the International Standard (ISO 3630-1). Torsional testing (angular deflection) was performed with clockwise file rotation and measurements obtained 3 mm from the tip (Figure 2). Specifically, the instruments were clamped at a distance of 3 mm from the free end of the tip with the use of a rubber jig, to facilitate accurate and expedient sample placing. Instruments were then rotated in the testing apparatus at 2 rpm, until fracture. Data was collected from the testing apparatus for analysis with the use of an attached LABVIEW interface (National Instruments Corporation, Austin, USA). Measurements were analyzed by using an analysis of variance (ANOVA). All pair-wise comparisons were conducted by using a Tukey HSD test, and significance was set at 95% level. 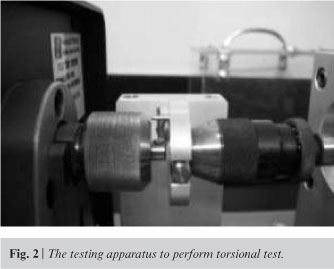 Results from the present study are shown in Table 1 and Table 2. Angular deflection is measured by degrees and represent the amount of rotation (and consequently deformation) that a RNT file can withstand before torsional failure. Each data point represents an average value of ten measurements, and standard deviation (SD) is within brackets. The results indicated that instruments manufactured by the new manufacturing process (TF) demonstrated significantly higher average angular deflection levels (P<0.05), than those manufactured by the existing grinding process. A significant difference was also noted between M2 and the other RNT, being the M2 those who showed the smallest values, while no statistically significant difference was noted between Profile and K3. All these comparisons are summarized in Table 2.

Nickel titanium is a shape memory alloy that is superelastic, because it undergoes a molecular phase transformation when stressed during canal enlargement, allowing a much greater elastic deformation than stainless steel under constant load [9]. In its resting state, the form of a rotary nickel titanium (RNT) file, it has an austenite crystalline structure. When stressed during function, it undergoes a transformation to the martensite crystalline structure that can absorb a higher force than non-shape memory alloys, and will return to its original shape. The transformation between the two phases has also been found to vary with RNT from different manufacturers [10]. The absorption of greater force allows the RNT file to both negotiate curvatures and cut dentin at the same time safely and efficiently, as long as the elastic limit of the metal is not exceeded. If excessive force or deformation occurs during use, files can exceed their elastic and plastic limits. The elastic limit of the metal is the maximum amount of deformation that a file can withstand and yet still return to its original shape. Beyond the elastic limit, the file will eventually reach its plastic limit, and break [10].

Theoretically a wider plastic field (superleastic behavior) and an higher plastic limit are very important mechanical properties, because RNT can withstand more torsional stress. Angular deflection is an important mechanical property, because it shows the amount of plastic deformation that a RNT can withstand before breakage under torsional stress. During intracanal instrumentation if the tip is blocked a wider angular deflection, which means a wider amount of both elastic and plastic deformation, will be helpful in preventing RNT file breakage. In the present study TF instruments showed the highest values for angular deflection, which is likely to be a significant improvement in the prevention of intracanal brakage.

Angular deflection is influenced not only by the alloy properties or manufacturing process, but design of RNT is very important [11]. The tested instruments have different cross-sectional design which may influence the results of the present investigation. Usually bigger dimension and bigger mass (inner core) make a RNT file more resistant to torsional, but more rigid as well. It is well known both for manual stainless steel and for RNT files that torsional resistance (angular deflection) and flexibility are inversely correlated when applied to a specific cross sectional design. However, in a previous study that followed ISO 3630-1 guidelines, the Authors [12] evaluated and compared flexibility of TF vs commercially available RNT files, included those selected in this study. They found that TF were significantly more flexible than the other RNT files. This is a very interesting finding, because for the first time the more flexible RNT (TF) is also the file that shows the best performance when tested for angular deflection.

A possible explanation of such results is that alloy properties and/or the manufacturing process may have more influence than cross sectional design when testing RNT according to the methodology described by ISO 3630-1. It is well known that RNT files are traditionally manufactured using a grinding process, which creates many drawbacks. Cutting across the grain of nickel-titanium wire's crystalline structure limits the overall strength of the instruments, due to the formation of micro-cracks and defects along the surface, and within the internal structure of the instruments. These defects can cause stress concentration points that weaken the instruments [6]. A torsional load was used in this study to measure angular deflection at failure, It is well known that excessive torsional forces lead to instrument failure, as a result of slippage between the planes of the instrument's crystalline layers. Surface defects and irregularities due to the grinding process can act as stress concentration points for torsional failure.

Theoretically, a manufacturing process which is likely to maintain cohesive forces between the layers of metal crystalline structure and limit surface defects, which are claims from the TF manufacturers, should produce instruments more resistant to torsional stress. Nevertheless, the Authors feel that more studies are needed to fully understand all the different mechanical properties (cyclic fatigue, cutting ability, etc.) of instruments produced with the process of twisting.

The findings of the present study showed that RNT files manufactured with a twisting process (TF) demonstrated significantly higher average angular deflection levels than RNT manufactured by a grinding process. Since angular deflection represent the amount of rotation (and consequently deformation) that a RNT file can withstand before torsional failure, such a significant improvement is a favorable property for the clinical use of the tested RNT file.