Women use more medicines than men because they fall ill more often and suffer more from chronic diseases, but also because women pay more attention to their health and have more consciousness and care about themselves. Although medicines can have different effects on women and men, women still represent a small percentage in the first phases of trials (22%) which are essential to verify drugs dosage, side effects, and safety. Even though women are more present in trials, studies results are not presented with a gender approach. This situation is due to educational, social, ethical and economical factors. The scientific research must increase feminine presence in clinical trials in order to be equal and correct, and all the key stakeholder should be involved in this process. We still have a long way to cover and it doesn't concern only women but also children and old people. The aim is to have a medicine not only illness-focused but patient-focused: a medicine able to take into consideration all the patient characteristics and so to produce a really personalized therapy. What above described is part of the reasons why in 2005 was founded the National Observatory for Women's Health (Osservatorio Nazionale sulla Salute della Donna, ONDa) which promotes a gender health awareness and culture in Italy, at all the levels of the civil and scientific society.

Gender medicine is essential in research and clinical practice. A first call to women's health was given in 1991 by Bernardine Healy who addressed, on New England Journal of Medicine, the discrimination of the cardiologists when treating cardiovascular diseases in women [1].

In 1998 the World Health Organization (WHO) launched a gender initiative to invite nations and international organizations to have a better evaluation of the risk factors which regard women's health. WHO considered that within the women's universe it's commonly spoken about women who work, women who are committed in different sectors of culture, politic, economy. Women are also described as fulcrum of the family but within the sanitary field, thinking to gender differences, women are taken in a small consideration.

Moreover in 2000 WHO has included gender medicine in the Equity Act to highlight equity as a principle to be applied to access care as well as to pertinence in care, in order to reach a gender appropriate care.

From 1998 EU has promoted women's participation in research projects: today there is a sector of the European research which has a specific focus on women.

For a long time clinical studies about diseases which involve both women and men have been conducted almost entirely on men. There was the assumption that the main health differences between men and women were only in the reproductive system. Likewise, women have been excluded by clinical trials in order to protect their future pregnancies.

However, between the end of the '80s and the beginning of the '90s, researchers noticed that there were many differences between men and women that could be the origin of a wide range of pathologies with a completely different course or response to medicines. Some of these differences are related to gender social differences (men and women often do a different job and so they are often exposed to different pathological risks). Some others are related to the biological character and result from genetic, hormonal and metabolic differences [2].

Medicines can have different effects on women and men. For example Digoxin was created in order to let the heart work better in patients who had a heart attack [3]. Trials were carried among a group of people composed for 80% by men and the results seemed to reduce the number of hospitalizations. Based on the trials' results, implemented in Europe and in USA, Digoxin was recommended in order to improve patients quality of life. Some years after a post-hoc analysis distinguished the results according to gender and it has showed that men who were taking Digoxin were having better results than men who were taking a placebo. Instead, women taking Digoxin were dying before women taking a placebo. Unfortunately, this effect was not studied because women were representing a small percentage of the first group of study.

As highlighted in our analysis about the health of the national feminine population [4], women live longer than men but they get sick more often, use more medicines than men and have a better awareness about health. They follow with more attention doctor's and pharmacist's suggestions; they trust generic drugs as well as alternative medicine. Birth control pills are often used by women in fertile age and the 11% of women in menopause use oestrogens in replacement therapy. Women suffer more than men of bones and pain syndromes and so they use more anti-inflammatory drugs. Symptoms related to menstrual period bring to an increase of drugs too. 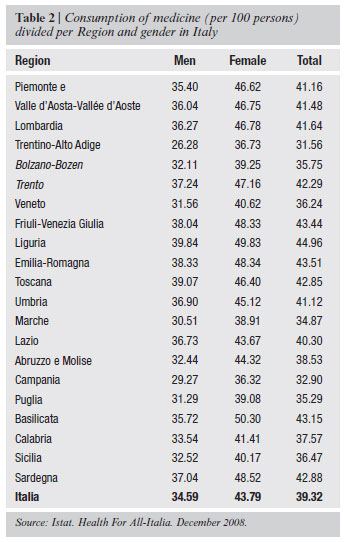 However women still represent a small percentage in the trials first phases (22%) which are essential to verify drugs dosage, side effects, and safety. Even though there are trial's cases in which womens' participation is higher, the results of the study are not presented with a gender approach. This situation is due to a scarce knowledge of the problem among researchers and the population. Moreover women have less time available due to their double job (mothers and professionals). Also ethical considerations have been made about women inclusion in clinical studies (pregnancy during trial, damages on foetus, etc.).

It is necessary to take into consideration also the higher costs of women's participation on research studies. There are high costs at the insurance and organizational level. It is necessary to consider the complexity of the feminine body, which means hormonal changes, menstrual period, the use of birth control pills, menopause. In order to have similar results in a group of men and women it is necessary to recruit a bigger sample.

Only recently, male and female animals have been included in a pre-clinical phase as well as women of every age in clinical studies, considering the real incidence of the illness, to obtain a significant statistically result and to identify gender related differences [5].

In the 90's the American Food and Drug Administration (FDA) has officially recognized the possibility of a difference, between men and women, in terms of drugs and has recommended to study all the individuals whom a drug is addressed: man, woman, black, white, etc. [6].

Since 1993 there is a law in USA which compels the clinical studies financed by the National Institutes of Health (NIH) to include, within the groups which are object of investigation, men, women and individuals who belong to ethnic minorities. Later, criteria have been extended to embrace the whole research on health financed by the NIH. The adopted rules declare the right that each citizen has to participate in the research and to share its benefits and risks [7, 8].

In the European Union (EU) the Commission on one hand promotes a gender balance in the research, but on the other the ethical issues often refer to the Helsinki declaration, which is focused on the protection of those who are involved in the research. In the European ethical committees an evaluation of the equal involvement of men and women in the studies is not yet required [9].

However including women in the research is not enough: scientists need to present results in order to consider the differences among women and men. In America a study has demonstrated that most of the cardiovascular clinical trials, published on the most famous journals have not presented results distinguished by gender, although it was easier to find this kind of information in the trials financed by the NIH.

Women research studies shouldn't be only a researchers' commitment but also a main purpose of the international medicine agencies. Press can also play an important role in spreading information and in collecting an adequate economical support to sustain an equal and correct research.

Doctors should also be alerted on this issue, starting from the University, as well as patients have a role to play: when a doctor recommends a specific therapy or test to a woman she should ask the doctor whether women have been ever involved in the research for that therapy or test.

All the essential information for an appropriate use of the drugs should be included on the illustrative paper, which accompany drugs, for what concerns dosage: these regard also gender related information.

Women's diseases are not intensely studied in research environments. To promote awareness and better understanding of the health pathologies that affect women in 2005 was created the National Observatory for Women's Health (Osservatorio Nazionale sulla salute della Donna, ONDa), which influences public health policies to consider both biological and gender-related differences. The different health needs of women and men should be reflected at all stages of policy and program development.

We still have a long way to cover and it doesn't concern only women but also children and old people.

The aim is to have a medicine not only illness-focused but patient-focused: a medicine able to take into consideration all the patient characteristics and to produce a really personalized therapy.