The discovery and development of HIV therapy: the new challenges

The therapy of HIV infection has been dramatically improved over the years, and allowed the achievement of unexpected results. The availability of many drugs, and the knowledge of HIV related pathogenesis, helped in selecting highly effective antiviral therapies, yet today a major challenge stands, that is the selection of the best regimen(s) in clinical practice. In this frame, evidence-based medicine remains a cornerstone of modern medicine, but its structure needs to be adapted to the new challenges, made by an excess of information (not always fully reliable), by highly sophisticated statistical systems that may overlook the clinical practice despite their ability to define the statistical significance, and the limited number of independent controlled studies. The revision of the criteria of evidence-based medicine, and their adaptation to the new tools available, may allow a better contribution to the definition of the best therapy for each single patient.

It is now almost 30 years from the discovery of AIDS, and 27 years from the identification of the causative agent, the human immunodeficiency virus, named HIV. Since then, major efforts from governments, public agencies and institutes, as well as big investments from pharmaceutical companies, have made possible what many considered a human miracle, that is transforming a deadly disease (rates of death in the range of 100%), in a chronic, curable disease, whose survival has not been fully quantified, but assumed to be not far from the average lifetime of a non-infected individual [1].

To date, the availability of 26 anti-HIV compounds, approved for clinical use by the US Food and Drug Administration (FDA) (Table 1), and the introduction of the highly active antiretroviral therapy (HAART) have provided an extraordinary clinical benefit in HIV-infected patients in lowering morbidity and mortality (Figure 1). 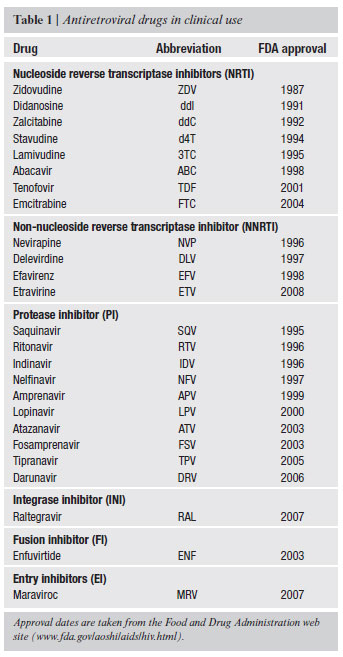 Beside this astonishing success, now the problem comes. Having many drugs available, and knowing that the therapeutic approaches to this disease must be based upon certain paradigms, the selection of the best drug and drug regimens remained unsolved. All guidelines tend, now more than in the past, to be relatively specific in their suggestion, yet they are not consistent each other, and what is given as assumed in one, is reported just as an option (perhaps the most valid, but still the option) in another one [2-4]. This situation seems to be not too far from that of other diseases. Despite the incredible amount of information available, and the statistical power of the modern analyses, the definition of a unitary approach in antiviral therapy is far to be achieved. Which are the factors that contribute to this apparent disarticulation of the process of knowledge in HIV field?

Among many elements to be considered, the most consistent is the crisis of evidence-based medicine. As the name says, evidence-based medicine (EBM) promotes the knowledge in the fields of medicine, based upon those factors that have reached a scientific evidence at levels beyond the doubt or the chance. To do so, EBM has defined certain criteria that help in selecting the papers and the data that have the greatest chances to get close to the truth, and that allow a good identification of the best medical approach.

Among the most important criteria are: a) information must come from articles published in peer-reviewed journals; b) information taken from randomized clinical trials have by far more relevance than information from cohorts and from expert opinion; c) statistical significance, that is a key factor for an information being considered in EBM.

All these elements have been heavily challenged by the new approaches to scientific medicine. First of all, the assumption that everything published in a peer reviewed journal is true, or at least very close to the truth, is no longer credible (or probably it has never been). In HIV field, more than 200 000 scientific articles have been published in the last 28 years. They are far beyond all possible hypotheses that can be raised, to the point that it is quite common that two or more articles on the same topic (and published at the same time) are in evident contradiction, despite methodologies apparently consistent! So, in term of evidence-based, it is too frequent to have contradictory results both from randomized trials, as well as from cohort studies, to draw conclusions that can be acceptable to the scientific community as such, and translated in guidelines.

One typical example is the study ACTG5142, one of the few conducted independently (see below a comment on this point) by a public agency [5]. This study challenged a first line therapy to HIV infection, based upon a tritherapy including a non-nucleoside reverse transcriptase inhibitor (NNRTI), versus a tritherapy including a protease inhibitor (PI), both associated to the same two nucleoside reverse transcriptase inhibitors (NRTI). The results show that the association with NNRTI allowed a greater number of patients reaching undetectable virus(success) compared to PI-based therapy. However, the patients failing the NNRTI-based therapy had a greater level of resistance (that precluded in part future therapies) and lower number of CD4 (that is a surrogate marker of lower immunological success), than patients under PI-based regimen. Just to make even more complicated the history, another couple of studies, one of them randomized, did not support the conclusions of ACTG 5142, since the rate of virological success was not significantly different in the two arms, NNRTI- and PI-based [6, 7]. These results have produced different interpretation of the data in the guidelines, to the point that recommendations vary in different countries [2-4].

Another major issue regarding randomized clinical trials, the cornerstone of evidence-based medicine, is the very small number of such studies run independently by public officers on behalf of public institutions. The large majority (far more than 90%) of the studies available in recent years have been run by companies with registrative purpose. Thus, and despite the presence of an independent data safety monitoring board (DSMB), the design is more focused to demonstrate the quality of the drug of a specific pharma company, rather than contributing to make the overall picture more clear.

A final problem regarding randomized clinical trials is the issue of non inferiority. The remarkable efficacy of current antiretroviral regimens has now caused a situation in which the new studies, since at least 5 years, have been all designed only with "non inferiority" as the outcome to be reached. This means, in practice, that the bounds of confidence of the studies have been posed with the purpose to define the potential non inferiority of a drug toward another one, rather than real superiority. The practical advantages of this approach are evident: in order to achieve the right of registering a drug, the key need is to demonstrate that such drug is non inferior to what is considered the (or one of the) current standard of care. In practice, today we have available a number of drugs, all each other non inferior, without knowing which is the superior one(s), and thus which are best to be used. Whether they are really convenient in clinical practice remains debatable.

Taking all together, evidence-based medicine per se remains (still today) the cornerstone of appropriateness in all clinical practices, including HIV infection. The criteria to be used to define whether approaches are appropriate, need to be adapted to the new situation of excess of information (not all reliable, despite being published), and the lack of evidences of superiority of one approach to the other. New standards have to be set, and interpretation systems need also to be adapted to the current practice. Above all, stands the need of tailoring therapy to each single patient. Evidence-based medicine has this major challenge, since the tools today available let us make this achievement possible. The current transit from a system to the other however, requires caution and knowledge. Good common sense represents today an invaluable tool to help us discriminating valid options in a jungle of inappropriate information.

4. US Department of Health and Human Services. Guidelines for the use of antiretroviral agents in HIV-1-infected adults and adolescents. Washington (DC): US HHS; 2009. p. 1-161. Available from: www.aidsinfo.nih.gov/ContentFiles/AdultandAdolescentGL.pdf.