SECTION I
ORIGINAL ARTICLES AND REVIEWS

BACKGROUND: A cross-sectional survey on knowledge and perception of occupational biological risk among workers in several occupations was carried out in the industrial area of Rome.
METHODS: The study was carried out in the period of March-April 2010 using a questionnaire with 33 items on the following areas: a) socio-demographic data; b) perception of the biological risks in ordinary occupational activity; c) knowledge about biological risks; d) biological risks in the working environment. The questionnaire was submitted to a convenience sample of workers of an industrial area in Southern Rome.
RESULTS: 729 participants entered the study from the following work activities: food, catering, service, farming and breeding, healthcare, school and research (males 57.2%; mean age 37.4 years, SD = 10.9). Significant associations were found between different activity areas with respect to the relevance of the biological risk (p = 0.044) and the perception of the biological risk (p < 0.001). With respect to vehicles of infectious agents, the highest percentages of the most common biological risk exposures were: air and physical contact for the catering and food group, 66.7% and 61.90% respectively; air and blood for the health and research group, with 73.50% and 57.00% respectively; and physical contact and blood for the service group, 63.10 % and 48.30%. Significant difference of proportions were found about the prevalent effect caused by the biological agents was the occurrence of infectious diseases (59.90% food group, 91.60% health and research and 79.30% service group) (p < 0.001). The perception of knowledge resulted in a good rank (sufficient, many or complete) in the food and catering group, 78.3% with significant difference compared to other professions (p < 0.001).
CONCLUSIONS: All participants show good knowledge the effects induced by biological agents and it is significant that almost half of the respondents are aware of the risks concerning allergies. Nevertheless, it is surprising that this risk is known mainly by workers of service, farming and breeding, to a greater extent than it is known by health workers.

According to the World Health Organization (WHO), each year many healthcare workers in Europe are at risk of acquiring an infectious disease after a percutaneous exposure; 304 000 individuals are exposed to Hepatitis B virus (HBV); 129 000 are exposed to Hepatitis C virus (HCV), and 22 000 are exposed to Human Immunodeficiency virus (HIV). The likelihood of acquiring an infection after occupational exposure is < 0.3% for HIV, 0.5% for HCV, and 18% -30% for HBV [18]. Although there is evidence that knowledge among healthcare personnel about preventive measures in occupational exposure to blood and body fluids is adequate, transferring this knowledge into practice remains inadequate [19].

Data on workers' attitudes and risk perception about biological risk are poor. Several comments declare detecting "the perception" of biological risk, but actually detect only the knowledge about risk. There is evidence that failure to report exposure to biological agents is based on perception of a non significant risk [20, 21], and that perception of high risk is particularly related to involuntary exposures against risk factors that are neither seen nor smelled, especially when they involve serious diseases, such as AIDS [22]. Moreover, there is evidence that knowledge, attitude and behaviours towards biological risk is an issue outside the health care sector [23-26].

Although several occupations entail biological risks, in Italy most of the data has been collected in hospital settings and, more specifically, by surveys of nurses [27, 28].

The aim of this study is to investigate knowledge and perception of occupational biological risk among workers in several occupations.

The questionnaire and setting

The study was conducted by using a questionnaire with 33 items, divided in four main parts:

-perception of the biological risks in ordinary occupational activity;

-biological risks in the working environment.

The questionnaire was submitted to a convenience sample of workers of an industrial area in Southern Rome, who were present at the working areas during the day of investigation with the consensus of the company Director. The work fields that were investigated were the following: food, catering, service, farming and breeding, healthcare, school and research. Before the distribution of the questionnaires, the person in charge of administering these questionnaires presented the aims of the study, stressed the anonymity of the responders, and acquired informed written consent. The completed questionnaires were inserted in an secured urn.

The survey was carried out in the period of March-April 2010.

The sample size calculations where:

-worst acceptable of frequency of knowledge on biological risks in the work field 40%.

Given the above parameters, and a confidence level of 99% we calculated a sample size of 661 individuals. Considering a 10% possible rate of non responders we decided to recruit at least 723 individuals.

The presentation of results was made according to the STROBE statement [29].

Internal consistency was evaluated by using cronbach's alpha on two set of items:

-the first one on three questions about perception of the biological risks in ordinary activity (see Table 1: questions number A1-A5);

-the second one on knowledge about the biological risks (see Table 1: questions number B1-B6).

Issues concerning safety instruments and procedures used on one's work site to reduce the biological risk were not analyzed as they depend from the particular activity that is carried out.

The descriptive statistics were carried out by using frequencies and percentages.

The analysis of possible associations between different groups of workers, knowledge and/or perception of the biological risk, was performed by using the chi-square tests.

The cronbach's alpha computed for perception and knowledge of biological risk were 0.502 and 0.559 respectively (Table 1). 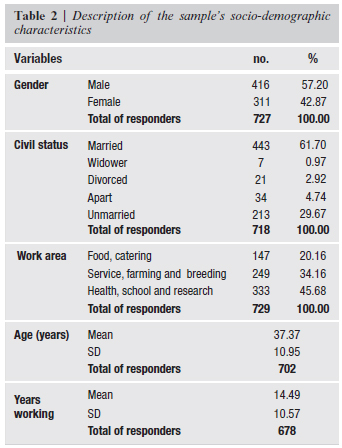 In Table 2 the distributions of socio-demographic information coming from the different work settings are revealed.

Table 4 shows the univariate analysis evaluating the possible association between different workers and the knowledge of biological risk.

In particular, the percentages of the most common biological risk exposures (B1) were: air and physical contact for the catering and food group, 66.7% and 61.90% respectively; air and blood for the health and research group, with 73.50% and 57.00% respectively; and physical contact and blood for the service group, 63.10% and 48.30%. Significantly different associations were found on the basis of the professional groups and the types of biological risk exposure after contact with: vomit (p < 0.001), urine (p < 0.001), feces (< 0.001) and physical contact (p = 0.002). All three groups reported that the prevalent effect caused by the biological agents (B2) was the occurrence of infectious diseases (59.90% food group, 91.60% health and research and 79.30% service group), with a significant difference of proportions that was found at p < 0.001. Regarding intoxications and allergies, significant differences percentage were also computed, respectively at p < 0.001 and p = 0.002.

These results were probably related to the educational levels and the individual awareness about pollution of the specific materials (i.e. solid waste, waste water, slaughtered materials, blood etc.).

Although food chain workers are involved in the educational programs about hazard and risk, we found that, surprisingly, they are less aware of the topic compared to health and service workers.

For question number B4, investigating the types of recoveries, the option "with more cycles of treatments" was more indicated from all groups: 62.2% food group, 58.60% health and research group and 57.10% service group.

The perception of own knowledge (B5) resulted in a good rank (sufficient, many or complete) in the food and catering group, 78.3% with significant difference compared to other professions (p < 0.001). The sources of knowledge were significantly different (B6), with 62.60% of the food group and 48.90% of the service group declaring to have received major support from corporate training courses, while 47.80% of the health and research group received support from scientific studies.

Our results suggest that the study was able to adequately test knowledge on worker's biological risk but not perception of risk (cronbach's alpha 0.559 vs 0.502). But the low level of internal consistency could be considered acceptable if the "underlying construct" is multifaceted [30], such as in this case.

Data reveals a high level of preoccupations for biological risk (48.34%) in the working areas of service, farming and breeding, confirming the results that other authors reported in their studies [6, 8]. Farmers are at high risk for exposure to airborne dust and microorganisms which can be significant during harvesting season.

Our study pinpointed an acknowledgment of the role of air and blood transmission, mostly considered by health care workers and researchers or teachers (73.5% and 57.1% respectively); while the role of tears and sweat was poorly recognized by all participants. In particular, our data confirm the recognition of health professionals as the most exposed workers both for contact with blood and body fluids and high risk of accidental occupational exposure [31]. Retrospective studies indicate a cumulative prevalence of almost 50% of work injuries, with high prevalence of needle puncture, particularly on hands (38, 58). Infectious diseases sustained by B. tuberculosis, tularemia, Streptococcus A and Staphylococcus aureus are occupational risks for healthcare workers [9, 32, 33].

All participants show good knowledge of effects induced by biological agents and it is significant that almost half of the respondents are aware of the risks concerning allergies. Nevertheless, it is surprising that this risk is known mainly by workers of service, farming and breeding, to a greater extent than it is known to health workers. In that case, the study suggests the need of specific training on biological risk in order to reduce lack of knowledge in this area.

Most workers (86%) consider there is a good chance that workers who get an infectious disease at work will recover, mainly with more cycles of treatments.

Moreover, a significant association was found in the answers concerning the sources of knowledge. It is surprising that less than half of responders reported corporate training courses (45.3%) as the main sources of knowledge on the biological risk among workers, since this type of information is mandatory according to actual health and safety legislation. This low percentage could be either due to lack of intervention or lack of quality in this field. Moreover, books or articles, as well as congress or meetings, have been considered by 38% and 7% of responders, respectively.

Finally, we need to consider the difficulty of biological risk assessment. Limit values of the presence of the biological agent have not yet been established and this prevents the implementation of a revised risk and effects assessment. The influence of the effects of genetic susceptibility to infectious diseases also needs to be considered [37]. Continued surveillance for cases of biological diseases is necessary in order to determine incidence, as well as specific sources and procedures representing risk factors.

In conclusion, this study underlined the importance of the biological risk not only in the healthcare sector, but also in other work fields, such as food, catering, service, farming and breeding, school and research. However, even if almost half of participants have the perception of the importance of biological risk, knowledge on this issue is still lacking, and this suggests the need of specific training on biological risk in order to reduce lack of knowledge in this area.

25. Kozajda A, Szadkowska-Stan´czyk I. Activities of the National Information center for Biological Agents present at workplace and preliminary analysis of data collected by the National Register of Biological agents Med Pr 2009;60(4):327-34.