Discrepancies between clinical and autoptic diagnoses in Italy: evaluation of 879 consecutive cases at the "Policlinico of Bari" teaching hospital in the period 1990-2009

INTRODUCTION: In spite of the benefits of autopsies, there has been in recent years a drastic decline in the number of autopsies performed, mainly due to an apparent unattractive cost-benefit ratio and fears of the medico-legal consequences.
MATERIAL AND METHODS: A retrospective study was conducted on the reports of all the 879 consecutive autopsies performed at "Policlinico of Bari" from 1990 to 2009.
RESULTS: All clinical diagnoses were compared with autopsy findings showing 558 concordant diagnoses (most of all neoplasms); 123 certain discordant diagnoses (69 of them with potential impact on survival, such as acute myocardial infarctions, pulmonary thromboembolisms, internal haemorrhages, surgery complications, aortic aneurism ruptures, and so on); 116 uncertain discrepant diagnoses; 82 unclear diagnoses.
CONCLUSIONS: The rate of discrepancy allows the authors to hypothesize that a better diagnostic assessment could lead to a different outcome. In terms of risk-management this negative performance needs to be carefully analysed and requires a comprehensive audit of all services provided. In this sense, the authors underline the crucial importance of autopsy as an essential tool to address unresolved clinical questions and highlight previously undiagnosed medical conditions.

The importance of autoptic diagnosis probably dates back to the mid-18th century and particularly to De Sedibus et causis morborum per anatomen indagatis (1761) by Giovanni Battista Morgagni, described by Virchow as "the father of modern pathology" [1].

The autopsy, considered at the center of modern medicine [2], is an essential tool in addressing unsolved clinical questions and in highlighting previously undiagnosed pathological conditions. Furthermore, autopsy is a major driver for delivering quality improvements; indeed, close collaboration between clinicians and pathologists can generate improvements both in organizational systems and healthcare professionals' performance [3, 4].

In spite of the benefits of autopsies, there has been in recent years a drastic decline in the number performed: in the 1960s, the autopsy rate in Europe and the United States was around 60%, whilst today the figure stands in the region of only 10% [2, 5].

The reasons for this fall lie in improved diagnostic techniques, over-confidence in their effectiveness, an apparent unattractive cost-benefit ratio and fears of the medico-legal consequences of autopsies in general [2, 6].

Failure to carry out autoptic diagnoses certainly has epidemiological repercussions (mortality, morbidity, prevention campaigns) and is a major cause of incorrect diagnoses. In fact, a well-known discordance exists between clinical and anatomo-pathological diagnosis [6].

The authors analyzed this diagnostic discrepancy by carrying out a retrospective case study on 879 consecutive autopsies performed at the Department of Anatomical Pathology of the "Policlinico" Hospital in Bari, Italy.

A total of 879 autopsy reports performed from 1990 to 2009 at the Department of Anatomical Pathology of the University of Bari, Italy were examined in order to compare clinical and anatomic-pathological diagnoses. Autopsies of neonatal mortalities occurring within the first day of life were excluded. The autopsies were then subdivided by gender, age and year of autopsy, the latter being further broken down into five-year periods.

In the firs part of the study, the reports were subdivided on the basis of the concordance of clinical and pathological diagnoses using the classification proposed by Goldman [6]:

Results were subject to peer review by another group.

The second part of the study consisted in subdividing the group CDD into class I and class II: -class I: missed major diagnoses with potential impact on survival which, if identified would have led to a change in clinical management with possible ensuing recovery or extension of survival; - class II: discrepant major or minor diagnoses with equivocal or no impact on survival due to the lack of adequate therapy or patient refusal of treatment or to a seriously compromised clinical condition.

The cases making up the study consisted of 576 males and 303 females, aged between 2 days and 91 years and are summarized in the tables below.

Both trends in autopsies by gender/year and by age group show, confirmed also by the analysis of five-year periods, a steady decrease in the number of autopsies (Figure 1 and 2) consistent with bibliographic data. 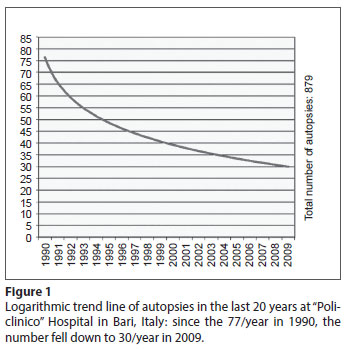 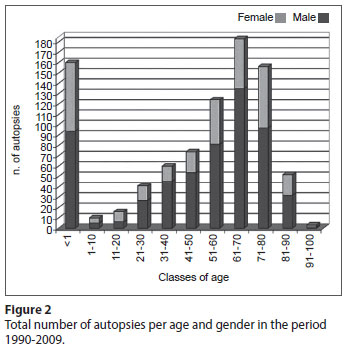 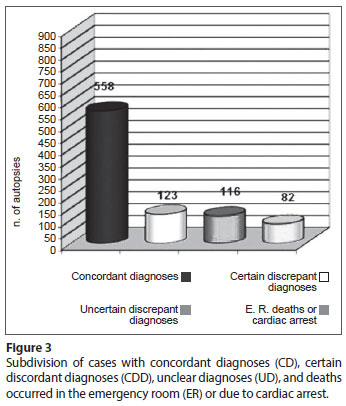 As regards the 123 cases belonging to CDD, subdivided by specialties (see Figure 4), they could be attributed 69 to classes I and 54 to class II, respectively.

The subdivision of CDD into five-year periods did not produce significant results nor did the subdivision of the same class by age group as this reflects the age-group trend of the total number of autopsies performed when excluding the 0-1 year age group.

Moreover, cases of CDD recorded percentual rises in the five-year subdivision when compared to the number of autopsies also analyzed in the same period.

There has been over the last decade a drastic fall in the number of autopsies both in Italy and abroad [711], as confirmed by our results. A possible reason for this decline is innovation particularly in the field of imaging technology and clinical laboratory instrumentation that has significantly raised the level of diagnostic accuracy. Such improvements by no means imply that autopsies have become redundant. Indeed, various studies in this area have shown limits in accuracy levels and persistent discrepancies between clinical and anatomo-pathological diagnoses that range over time from 3% to 68% [12-17]. A possible cause for this drop in the number of autopsies could lie in cultural factors such as a rejection of autoptic diagnosis in countries with a marked Christian/Catholic tradition. This hypothesis however is not confirmed by data, which show that the fall in the number of autopsies is a global phenomenon first recorded in Anglo-Saxon/Protestant countries. Furthermore, by law family members cannot prevent an autopsy when doctors consider this as necessary.

Reasons for a general fall in autopsies more realistically are connected to the organizational setting rather than the behavior of single individuals. A first element to be considered is undoubtedly economic: autopsies in fact at the administrative and accounting level represent a form of intermediate cost in the process of delivering patient care. In DRG (diagnosis related groups)-based payment systems, such a cost may be viewed as unnecessary following an unsuccessful medical outcome. A second element to be borne in mind is the often complex and lengthy autoptic process, which may result in reducing the value of the autopsy itself, a crucial factor in any analysis of the efficiency of healthcare structures. Another element that cannot be ignored is the fact that doctors, who in general are not used to working with systems of internal control, may view any diagnostic discrepancy as proof of an unsuccessful outcome with potential medico-legal consequences.

Interestingly, our data also reveal two peaks in distribution of the number of autopsies: the first relating to infants of 12 months or younger and the second relating to those aged between 60 and 80 years. The second peak is certainly explained by the greater incidence of cardio- and cerebrovascular events in this particular age group. As regards the number of autopsies performed in the first year of life in the decades under analysis, the result could be due to the fact that neonatal mechanical ventilation was available only towards the end of the 1990s. Furthermore, no one clinic prevailed over another; in fact the result was substantially constant over time bearing in mind that along with the increase in the number of diagnosable pathologies there was an improvement in the forms of care available.

The most alarming finding is the high percentage (14.00%) of CDDs, notwithstanding the exclusion for statistical accuracy of 116 UDDs (13.20%) and a further 82 UDs (7.65%). Most of these (34.85%) unequivocally demonstrate organizational deficiencies or, worse, clinical incompetence. The percentages reveal either poor diagnostic skills or an inability to carry out a clinico-nosographic classification in the pre-autopsy stage. When we concentrated our analysis solely to CDDs, the departments reported in Figure 4 emerged as being most at risk of diagnostic imprecision, a fact that highlights the need for organizational actions aimed at changing outcomes [18].

Consequently, we examined cases of certain discordant diagnoses (123 in number), where sufficiently long hospital stays and the availability of data to clinicians did not enable correct diagnoses; the set of concordant diagnoses (558 in number) was used as a control group. This confirmed the usefulness of autopsies in producing correct diagnoses of the cause of death; the autopsy therefore becomes not only an objective, but also the conduit for identifying possible operational criticalities.

The hoped-for change in trend with its related increase in the number of autopsies however cannot hide the problems present upstream in the autopsy process [19]. One of these is the tendency for clinicians to produce generic autopsies often as a form of protection against possible medico-legal consequences. Such behavior needs to be corrected through a specific program of training across healthcare structures which is backed up by constant oversight and control so that consolidated treatment errors can be eradicated. In fact, the most worrying result emerging from our analysis is the high number of discrepancies between clinical and anatomo-pathological diagnoses, in all likelihood due to incorrect diagnostic-therapeutic procedures.

To be stressed is the fact that this analysis risks being an end unto itself unless it is continued over time. The picture that emerges from our study does not provide insights as to the dynamics of the phenomenon. This can be obtained only through a process of constant monitoring of the territory that takes into account not only its epidemiological data, but also the specific case mix of the healthcare structure in question. Such monitoring is an essential characteristic of a system that redefines treatment procedures on the basis of pathologies and patient conditions. Here central control structures have a key role to play in identifying and enacting necessary changes. This system will be able to identify criticalities ward by ward, which in turn will also encourage the development of highly specific analyses, on a case-by-case basis, through shared systems that are concurrently clinical, anatomic-pathological and medico-legal. Failure Modes and Effects Analysis (FMEA) and Root Cause Analysis (RCA) can therefore be used (or any other judged to be appropriate) to identify errors [20], correct them and put into place essential changes also at the organizational level as a crucial part of risk management systems.

The Authors declare that there is no conflict of interest. This research received no specific grant from any funding agency in the public, commercial, or not-for-profit sectors.

9. Royal College of Pathologists of Australasia Autopsy Working Party. The decline of the hospital autopsy: a safety and quality issue for healthcare in Australia. Med J Aust 2004;180:281-5.

SciELO Analytics
Dimensions
Discrepancies between clinical and autoptic diagnoses in Italy: evaluation of 879 consecutive cases at the "Policlinico of Bari" teaching hospital in the period 1990-2009
PlumX