How are the temporary workers? Quality of life and burn-out in a call center temporary employment in Italy: a pilot observational study

OBJECTIVES. The aim of this study was to quantify the level of health related quality of life and burnout in a call centers sample of precarious workers.
METHODS. An observational study was carried out in Italy. A self-reported anonymous questionnaire was administered to temporary workers in order to estimate burn-out and quality of life levels.
RESULTS. 227 questionnaires were collected. 78% of the sample was female and the mean age was 35.48 years (SD = 9.91). Among the participants, 40% were smokers, 42% regularly drinkers, 65% changed the body weight (more than 5 kg, in 1 year).
The mental component score (MCS) was significantly better in subject that have a regularly life style, for example in those no change their body weight (p = 0.001), sleep more than 7 hours (p = 0.018) and followed a diet (p = 0.035). The DP (depersonalization) is significant higher in former smokers (p = 0.031), in underweight subjects (p = 0.025) and in the group that have a precarious employment of over 2 years (p = 0.013).
CONCLUSIONS. This investigation shows that in this particular category of atypical workers depressive symptoms and quality of life were lower than the general population. It is important to underline that the interpretation of the results is limited partly by the observational character of the study.

Call centers represent an important working market in several countries. Often, people that work in call centers societies have a permanent precarious working condition. Data relating to the Italian employment, collected in the second quarter of 2012, show that precarious condition affects almost 3 million [1] short and not extended contracts lead inevitably to an increase in the unemployment rate.

Temporary working is an employment form almost widespread in the world with globalization process; work position is occupied only for a well certain period of time and then, according to business employee can keep on the same conditions, come out working relationship or be hired in permanent way. Virtanen et al. [2] in a review showed a higher risk of psychological morbidity and occupational injury in temporary workers compared to permanent ones, due to job insecurity and absence of security at the workplaces, respectively. Precarious workers present particular features compared to permanent employed: low social level, low economic status, not sentimentally engaged, a smaller number of children [3]. Furthermore, workers employed in occasional and seasonal jobs showed a significant dissatisfaction [4, 5].

Generally speaking, call centers activities include inbound or outbound services. The first ones administer incoming product support or information inquiries from consumers, whilst the second type is operated for telemarketing, solicitation of charitable or political donations and debt collection. Ferreira and Saldiva [6] indicated that call centers working on outbound services faced higher productivity pressures and conflicts associated with supervisors than on inbound services, but work related to inbound services was more repetitive, and lacked autonomy and a structured work/rest schedule. Lin et al. [7] found a correlation between high job stress and risks of multiple health problems. Several situations like job stress, competition, relationships with customers, a limited autonomy cause a stressful condition and further, movements represent risk factors for musculoskeletal symptoms [8]. Concerning psychological risk factors, an increased workload was strongly associated with greater stressful, likewise, there is an important correlation between mental health problems and call center employees compared to groups in other jobs [9]. Moreover, several studies regard specifically the relationship between shift work and physical health effects in short and long term [10-13]. Particularly, one study [14] has demonstrated that inappropriate sleep was associated with negative physical health and for this reason, it is very important to promote sleep hygiene, which may decrease overall morbidity in call centers workers.

In the light of the findings it is important to consider the potential health implications of job stress from interpersonal factors that are unique in a call center setting.

The aim of study was:

a) to quantify the level of health-related quality of life and burnout in a call centers sample of precarious workers;

b) to assess factors potentially associated to these outcomes.

The observational study was performed following the STROBE statement [15].

This investigation was carried out in two call centers in Rome, Italy, from November 2011 to January 2012. The information was collected using a questionnaire directly administered at workplace. Those who decided to participate were requested to go in the administrative office to explain the scope of the research and to give the questionnaire. One center employed either inbound operators or outbound operators, the other center had only outbound workers. Consensus document concerning the participation to the study was obtained from each participant.

All participants have been recruited on voluntary basis asking them to fill in the questionnaire during working break in order not to hinder their work. The study was conducted according to the Helsinki declaration and the protocol of the study was approved by the local ethic committee.

Questionnaires were nameless and self-reported, and returned directly to the researcher. The following information were obtained:

Five linear multivariate regression models were conducted using the following dependent variables: PCS, MCS, EE, DP and PA. The covariates included in these models were those that at the univariate analysis had obtained a p-value < 0.25 in according to Hosmer and Lemeshow's procedures. The fit of the model was estimated by the correlation coefficient R2.

The correlation analysis between outcomes was carried out using Pearson's coefficient.

Out of 265 questionnaires distributed, 227 were returned filled in (response rate of 85.7%). The remaining 38 questionnaires belonged to workers that decided not to take part or had filled them incompletely: the noresponders had same distribution for gender and age of responders.

Table 1 shows the socio-demographic characteristics of the participants: female accounted for 78% of the total sample that had a mean age of 35.48 years (SD = 9.91). In Table 1 the descriptions of lifestyle and anthropometric characteristics is reported: 40% were current smokers; 42% regular drinkers; 77% of the responders were classified as normal weight and 65% changed the body weight (more than 5 kg in one year); 40% slept less than seven hours per night.

No significant associations were identified for EE.

The multivariate linear regression models were reported in Table 4. 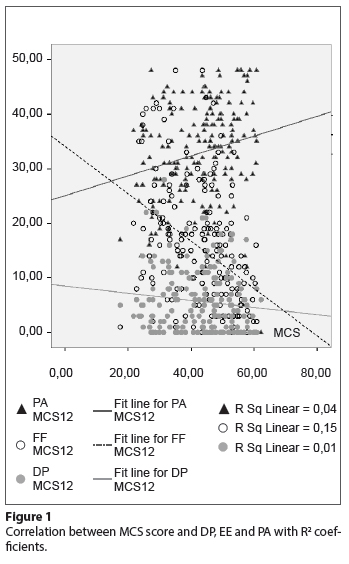 This study found that having an atypical jobs, specifically fixed-term contracts, does not increase the quality of life and burnout.

Original articles and reviews In particular it is interesting to underline that the levels of the emotional exhaustion, depression and personal accomplishment are according to the medium values. The lifestyle of this sample was extremely different from the general population. In particular, the percentage of habitual consumption of alcohol and the smoking habit appears to be double than the general population [18, 19].

These results may suggest that the quality of life of the atypical workers in call centers is lower than the general population, although we cannot assert that this type of work is the cause of this worse condition. Multivariate models showed that among young people and those who have this temporary employment for more than two years, the level of depersonalization may increase significantly. You can probably assume that this type of employment status may contribute to the increase of discomfort in people.

The study has some limitations. First, the project was conducted in just two call centers and a convenience sample, and this sample is not representative of the all atypical jobs. Secondly, using the self-administered questionnaires for the collection of information, an information bias could be present due to different personal interpretations of the questions, closed answers and missing data.

Another major limitation is its cross-sectional character, which makes difficult to interpret the associations observed, especially because it cannot rule out the possibility that some people had precarious employment because of their poor health status [21, 3].

Even the choice of using the SF12 may have reduced the strength of the study. Although on the one hand have adopted this scale has made it easier for the administration of the questionnaires, and reduced the missing data, on the other hand it has certainly reduced the information that can make clearer the picture on the psychometric characteristics.

Further limitation is the heterogeneity in exposure to temporary employment refers to both qualitative and quantitative aspects. In fact, the analysis shows that this factor increases the depersonalization score.

According to Benach and Muntaner [22] there is need to develop a new research agenda on this topic. In fact this is an exposure in which many factors are involved at various levels and it is arduous and complex to analyze the social and health effects: gathering of quality data within improved information systems, clarification of precarious employment dimensions, development of causal theories and pathways, and creation of instruments capable of measuring the mechanisms through which precarious employment may damage workers' health.

Future researches should therefore concentrate on the investigation of multiple situations of precariousness in different social contexts and for different types of workers.

The authors are grateful to Anthony Schulman for the English revision of the manuscript.

Author's contribution statement: conceived and designed the study: AM, GLT. Collected and evaluated clinical records: AM, AN. Analyzed the data: AM, VC, AN. Wrote the paper: AM, AN, VC.

Conflict of interest statement
The author has declared that no competing interests exist.
Received on 15 October 2013.
Accepted on 29 January 2014.

SciELO Analytics
Dimensions
How are the temporary workers? Quality of life and burn-out in a call center temporary employment in Italy: a pilot observational study
PlumX