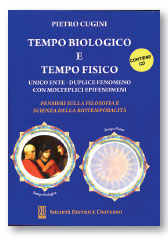 In one of his most important dialogues, "Phaedrus", Plato reports a very passionate comparison between oral (speech based) and written (book based) cultures. He proudly affirms the neat superiority of oral tradition. Writing does not increase the real wisdom, on the contrary, written texts only increase the "appearance" of knowledge (opinion). Writings have the only merit to recall to the memory already known concepts. The written text is a dead thing, while a speech is alive and asks for the continuous action of the author.

Pietro Cugini in his monumental opus Tempo Biologico e Tempo Fisico is able to generate a sort of "oral transmission" of knowledge in Plato's style notwithstanding the fact we are dealing with an almost 900 pages book.

The theme of the book can be summarized in few statements.

"Time is not only a duration and ‘what is measured by a clock': time is a single entity, having a specific and unique ontology, a double (and largely irreducible) declination in inanimate world and living beings, and a huge multiplicity of epiphenomena'. Biological clocks are variously intermingled at different scales and across different organization layers and ask for a philosophical frame completely different from physical time".

This basic theme is faced by many points of view and emerges as the "continuous bass" of the entire treatise.

Prof. Cugini is one of the most prominent scholars of chronobiology in the world and the book is a real mine of information about the time-related dimensions of both physiology and pathology as well as about the statistical and mathematical methods used to single out temporal structuring of organisms from DNA oscillations to circadian rhythms of populations. This should be a more than sufficient reason to read the book, but this is only a part of the story: Prof. Cugini drives the reader into a journey inside the philosophical speculations on the deep nature of time, where we meet three thousands years of human thinking. In the same journey we will be fascinated by aphorisms on the eternity, the course of time, the sensations, the meditation on death and senescence. What can be equated to a little "miracle" is that this happens without fractures and abrupt changes: so we can open the book in any part and start reading (tolle et lege as they said in the Middle Ages) and learn something. This is what I define as "oral tradition", the complex landscape of philosophical statements, statistical analysis, biological models, is kept together (and acquires integrity so allowing the reader a multiple choice approach) by a common wisdom and a very clear philosophical foundation that permeates all the pages.

The book stems from decades of scientific research and clinical practice and distillates a core of wisdom that allows the reader to resonate with the author speech. It is sufficient we face the book with an open mind to be sure to find an idea, a statement, a concept that will shed light on our personal thinking. This happens so rarely in our days where science is getting more and more distant from both culture and reality, this is why I am pushing you to try to open this book and start to read.

This book deals with Preventive Medicine (PM) and autoimmunity, and explains how an interdisciplinary approach between these two topics may help to improve the early detection of diseases. Through the contribution of several Russian scientists who were involved in the preparation of the chapters of this book, the authors support the scientific and philosophical concept that PM is "an alternative healthcare ideology and methodology", and propose autoimmunity as a valuable tool to fulfill PM goals.

PM relates to the management of the physiological healthy condition, in order to identify the early onset of diseases at their clinical stage. There are three essential pillars that constitute the basis of PM:

 estimation of the risk to develop a given pathological condition due to individual genetic condition, which are assessed by genetic diagnostics and by family anamnesis studies;

The editor of the book (Alexander B. Poletaev), who is also the author of two chapters, compares the two different, and somewhat opposite approaches of modern medicine: traditional "repair" medicine based on "tablets and scalpels", and PM whose main task is to highlight any small deviation from normal, healthy condition in order to prevent the disease to progress any further toward illness. Poletaev stresses the point that the comparison mainly regards the philosophies and methodologies underlying these two sections of medical science. In the foreword, he clearly describes the rationale of PM approach along with a practical proposal on how to implement PM basic goals, namely prolonged lifespan and, most importantly, keeping people in good health.

When mentioned, the historical scientific background gives a clue of the cultural and speculative path which leads to present knowledge, and this is one of the reason that makes this book worth reading. The very interesting feature of this book is not only the scientific updated contents, but also the different view used to understand the pathological phenomena, and the proposed perspective regarding the addressed topics.

We recommend to read the Foreword and Preface of the book as they introduce the reader to the "philosophy" of PM, and anticipate some examples of how the measurement of the molecules (antibodies and/or autoantibodies) involved in the sub-clinical development of a disease may, in fact, represent a novel and effective approach meant to identify and possibly cancel the disease at its very first steps.

Based on scientific data and discoveries on autoimmunity collected in recent years, the authors focus their attention on the involvement of the physiological autoimmune response in various pathologies. This response is not regarded as being always dangerous or harmful, but rather it has a major role in clearing the body during and after an infection. Any slight quantitative shift from the physiological concentration of the molecules involved in this response, namely the autoantibodies, highlights the existence of an underlying pathological process. According to the authors point of view, autoimmunity stands as the beacon in the fog of the early, apparently undetectable signs of the disease. According to this view, the approach for studying biomarkers should be wider.

Biomarkers are used to evaluate the effect of therapies and have been proven to help detection of a pre-existing pathological condition before it reaches the clinical status. The technological and scientific progresses made in the field of laboratory diagnosis may now allow to proceed toward the identification of a large number of genetic disorders and biomarkers whose slight changes are sensible indicators of pre-disease state. Whatever the cause that triggers the process leading to the subclinical and clinical manifestation of the disease, earliest biomarkers associated to the very first change at molecular levels have not been discovered yet.

Although the measurement of chronic diseases biomarkers may have a central role in the identification and subsequent treatment of disease in order to stop its progression, the authors strongly support the idea to look also at the physiological role of the immune system in keeping the environment within the body cleared from pathogens. Starting from a completely different approach, the authors suggest to consider natural auto-antibodies as the promising biomolecules that may help to reveal the disease at its beginning. Thus, to include also natural antibodies and autoantibodies as prognostic and useful molecular markers, along with "classical" biomarkers of diseases, like cholesterol, LDL lipoproteins, HDL lipoproteins and glucose. According to this view, autoantibodies are the former actors in the development of a disease, as their activity is directed toward the antigens of damaged cells in the diseased organ or tissue. This very important activity, called "autoclearance", is foreseen by the authors as the possible "universal tool of the earliest diagnostics of beginning disease".

The book is structured in seven self-standing chapters. Each chapter is a review of the consolidated knowledge on specific topics related to immunology, including basic principles of the immunological physiologic process, and recent insights into new findings. All subjects, including the historical background, the philosophy behind the scientific process, and the new findings, are reported in a clear and simple written style, that makes following the explanations and descriptions light, even when the matter becomes very technical and when thorough background information is given. It follows a brief introduction to the different chapters.

Chapter 1 deals with the basic principles of adaptive immune system and introduces the seminal "immune network theory" by Niels Jerne. This theory states that a dynamic balance exists among the components of the immune system, namely antibodies, autoantibodies and lymphocytes. Any perturbation of this balance will result in the activation of the immune system. The physiological role of autoantibodies, extended beyond their classical "evil" disruptive action against self-structures and their variation in serum concentration following the beginning of a pathological event in its first stage, are also described.

Starting from the assumption that discovering the way(s) the immune system works will be of great help in preventing grafts and diseases, Chapter 2 introduces a set of different hypotheses that have been formulated in an attempt to describe the physiology of immune system, and how its various components interact to maintain homeostasis. Among the plethora of models listed and briefly described, the author supports the "integrity model" as possible candidate to explain the largest part of immune mechanisms.

Chapter 3 reviews how the immune system proves to be useful in participating to the normal function of healthy heart, and how some properties of the immune system itself are helpful in treating cardiac diseases.

An insight on the definition of the "physiological autoimmunity" concept and its involvement in the regulation of endocrine system are given in Chapter 4. Beside the reference to the Russian paternity of the "physiological autoimmunity" concept, the authors provide accurate description at both molecular and clinical levels of allergy and autoallergy. The principles to be met to rule in or out a disease as autoimmune are also reported. These criteria, known as "modified Ernest Witebsky's postulates", represent a rational approach to identify the true nature of a condition, and to distinguish an autoimmune disease from the existence of a causative relationship between a microbe and a disease.

An interesting review of some autoimmune based syndromes (e.g. multiple sclerosis, type 1 diabetes) and of the specific molecular diagnostic methods used/proposed to detect the autoimmune diseases are given in Chapter 5.

In Chapter 6 the limitation of using the assay of one single autoantibody specificity is shown. The clinical cases reported suggest that clinical observations and lab tests leave the open question on the value of routine tests when doctors have to deal with difficult diagnosis. The authors suggest a different practical approach to the laboratory measurements of autoantibodies, and show that autoantibody profile, rather than the determination of single autoantibody specificity, may provide more diagnostic and prognostic indications, possibly extending the range of PM by anticipating diagnosis.

The last Chapter is an extensive review on autoimmune thyroiditis including historical background, clinical manifestations and molecular origin of the condition. Experimental data indicate the role of cytokine imbalance and the derived systemic effects as important factors in the development of the disease. The presence of anti-thyroid autoantibodies is not sufficient for definitive diagnosis, but rather the diagnosis should be the result of the integration of early clinical manifestations and concentration changes of anti-thyroid auto-antibodies.

The book Physiologic Autoimmunity and Preventive Medicine is a valuable and innovative proposal of a new approach to look at PM through the lens of autoimmunity. The data regarding the involvement of autoimmune system and how its dysregulation may lead to the pathological condition cast a new light on the role of antibodies and other immunological biomolecules in body homeostasis. The discover and in some case the re-discover of classical immunological theories on infection-related processes provide new knowledge, and ultimately new strategies, to anticipate the clinical manifestation of the disease which is the ultimate goal of PM.