After 23 years of war, culminating in several weeks of particularly intense bombing, the health and health care system of the Afghan people are in tatters. As this issue of the Bulletin went to press, WHO was poised to spearhead efforts to restore the country's shattered health system. But it faces what a report by WHO's Central Asia crisis unit sees as "one of the worst health situations in the world".

Dr Gro Harlem Brundtland, WHO's director-general, says the "number one goal is to save and improve lives in Afghanistan". However, she believes "the international community must now seize what is an excellent opportunity to turn the health situation around". A meeting in Islamabad planned for the end of November, chaired by Dr Mohamed Jama, WHO's regional coordinator for the crisis in Afghanistan, will work out a "reconstruction plan" aimed at restoring the country's health system. The meeting is organized jointly by the UN, the World Bank, and the Asian Development Bank. Judging from the health situation in Afghanistan, it will have a challenging agenda.

Women, for example, for years deprived of access to health care, particularly safe childbirth services, are especially at risk. Maternal mortality has escalated to 1700 per 100 000 live births, among the highest in the world. WHO estimates that every 30 minutes, a woman dies of pregnancy-related complications in Afghanistan. With the collapse of the essentially rural economy, malnutrition is also on the rise and is believed to be affecting about 10% of women of childbearing age.

Children, too, are in desperate circumstances. A quarter of the country's children do not live long enough to celebrate their fifth birthday. An estimated 10% suffer from acute malnutrition and about 50% from chronic malnutrition, rendering them particularly vulnerable to disease, especially pneumonia, tuberculosis, and diarrhoeal diseases. Cholera is a constant threat, as are measles, meningitis and viral haemorrhagic fever. 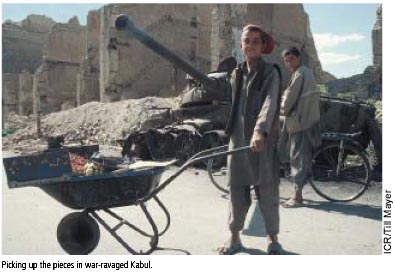 The damage is not just physical. At least one-fifth of the 23 million people living in Afghanistan, plus about a third of the 4 million Afghan refugees in Pakistan and other neighbouring countries, are suffering from what WHO calls "the invisible wounds" of war  severe mental disorders, especially depression and anxiety.

The resources in Afghanistan to cope with this mental health crisis are sorely lacking. A recent WHO count found only 8 psychiatrists, 19 psychiatric nurses, 20 psychologists, and 3 hospital mental health units for the entire population. Community and family coping mechanisms have also fallen victim to war: Kabul alone is estimated to have 60 000 widows, many of them now reduced to begging. "Women in particular," the crisis unit's report says, "have seen a dramatic deterioration in their psychological, family and social life over the past decade ... Widows, pregnant women, and survivors of sexual violence are particularly vulnerable."

WHO's priorities, as it prepares to help restore the country's health care services, include improving women's health, fighting infectious diseases, and getting hospitals and health centres back on their feet.

"Aside from relieving the suffering, rebuilding the health sector is absolutely crucial for the future stability and socioeconomic development of Afghanistan," Dr Brundtland said in a press statement. "Investing in health, among other social services, is investing in peace and prosperity."