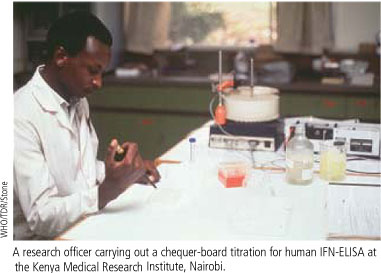 A panAfrican forum has been launched to promote health research for development in Africa. It will also strengthen the continent's voice in setting and implementing the global health research agenda.

The African Health Research Forum (AfHR) was inaugurated in the presence of more than 700 health researchers attending the sixth annual conference of the Genevabased Global Forum for Health Research, in Arusha, United Republic of Tanzania, in November last year.

The AfHR will be headed by Professor Raphael Owor, a pathologist, currently president of the Uganda National Health Research Forum (UNHRO), and will be managed by a steering and executive committee representing the whole of Africa. The body will include policymakers and ''selected'' nongovernmental organizations, and will divide into sub regional chapters along the lines of the existing Francophone Health Research Network.

According to William Macharia, Associate Professor of Paediatrics at the University of Nairobi and one of the architects of the Forum, 42 networks and organizations have been contacted as potential members of the new research body. ''While it is too soon to know what the overall response will be throughout Africa, it has been encouraging so far,'' says Macharia.

The steering committee has proposed a threeyear programme of activities. Three flagship projects will involve research ethics, leadership development, and a communication system for sharing research information throughout Africa. The AfHR will also investigate existing national health research systems, and the state of NorthSouth collaboration.

The VicePresident of the United Republic of Tanzania, Dr Ali Mohammed Shein, hailed the initiative saying, ''Research will have more impact if nations and regional groupings can create better functional networks for concerted action.'' The new research body would go a long way towards ensuring that Africa's voice ''is heard loud and clear at the global level, allowing us to take part in shaping the global health research agenda,'' Shein told participants. Without such a forum, Africa would find it difficult to fight for an equitable share of global resources, he said.

So far, however, the new forum itself has received no substantial funding. ''We are living from hand to mouth'' said Professor Owor. Initial seed funding  mainly for committee meetings  came from the Ottawabased International Development Research Centre (IDRC) and the Council on Health Research for Development (COHRED). The amount so far donated is about US$100 000.

However, Professor Rose Leke, Associate Professor of Parasitology and Immunology at the University of Yaoundé medical school, Cameroon, and a member of the AfHR steering committee is optimistic. ''There are many agencies willing to fund quality proposals. African scientists must come up with proposals worth funding,'' she said.

AfHR officials also hope that African governments will endorse the Forum next year in Harare, Zimbabwe, during the WHOorganized African ministers of health meeting. ''They will be asked to lobby the Africa Union (AU) to set up a health research desk within its administrative structure,'' said Dr Mohammed Said Abdullah of the National Health Research and Development Centre, Kenya, who will oversee the ethics and training components of AfHR's programme. ''We want governments in this continent to put a certain amount of money into health research through the AU.'' If the Forum became an organ of the AU, it might attract an annual budget.

As for the Forum's activities, Abdullah said they would help to give health researchers in Africa ownership of their work.

''Often researchers from the North come to Africa to collect blood and human tissue. If there is a major invention based on these materials, they take all the credit, forgetting all other players from the South,'' he observed. ''An international code of research ethics and rules will be designed by AfHR to enhance understanding of such collaboration,'' Abdullah said. ''Even the ordinary man or woman needs to be educated that he or she cannot be coerced to donate blood or tissue for research.''

Professor Leke observed that most African countries lacked ethics committees that were capable of accurately and competently interpreting WHO's international guidelines on health research.

''In the absence of such committees, it becomes difficult for countries to uphold and enforce research ethics, either for their home researchers or outsiders,'' said Leke. ''This forum will ensure that African countries establish competent ethic committees capable of facing the challenges of our times''. She added that health researchers needed rigorous and continuous training on the ethical issues they were likely to encounter in the course of their work.

For example, most African women would seek consent from their husbands before submitting to being subjects of any kind of research. ''This is something researchers ought to know. In such circumstances, they should beware of coercion to obtain information,'' said Leke.

Other members of the steering committee of AfHR include Dr Mutuma Mugambi (Secretary), Dr Sama Martyn (Vice Chairman) and the head of the Essential National Health Research, Cameroon, and Dr Andrew Kitua, the DirectorGeneral, National Institutes of Medical Research, United Republic of Tanzania.