Iraq's interim health minister Khudair Abbas is working on plans to transform his country's public health system that once favoured Saddam Hussein's allies to one that is more equitable and primary health care-based and reflects the dual burden of noncommunicable and communicable diseases.

Dr Abbas has been working closely with WHO, the Coalition Provisional Authority in Iraq (CPA), several UN agencies and the World Bank to identify Iraq's immediate health needs and draw up a long-term plan for public health.

The plans, which were due to be presented at a donor's conference in Madrid on 23–24 October, require about US$ 1.6 billion in funds from 2004 to 2007 in addition to the US$ 1 billion already raised by the US Government and Iraqi oil revenue.

"Our chief priority is to jump-start the Iraqi health system so that it can provide basic functions again like disease surveillance, provision of medicines and basic hospital services," said David Nabarro, the senior WHO official appointed by the UN and the World Bank to help prepare the health side of Iraq's needs assessment for Madrid. 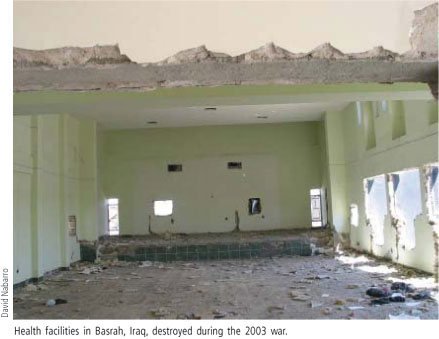 Building a health system virtually from scratch is a formidable challenge amid continued violence, tension and uncertainty and is expected to cost billions. WHO has already helped Afghanistan, East Timor and, many years ago, Cambodia, rebuild their health systems from the ashes of war. After Iraq, the next such project will be to help Sudan create a public health system, Dr Nabarro said.

But humanitarian agencies in Iraq say the dire security situation there is making their mission difficult and dangerous. After the bomb attack on UN headquarters in Baghdad on 19 August, many — including Médecins Sans Frontières (MSF), the International Committee for the Red Cross (ICRC), Oxfam, Save the Children, Merlin and the United Nations High Commissioner for Refugees — scaled back their operations, withdrew international staff and moved their headquarters to neighbouring Jordan or Kuwait.

The ICRC is still working closely with local partner, the Iraqi Red Crescent Society, visiting detainees and providing emergency support for water and sanitation as well as medicines. Médecins Sans Frontières said that, despite the security situation, it was providing primary care services, with up to 2500 consultations per week.

But the system was "already badly run down" due to previous wars, sanctions, drastically reduced spending — some estimates suggest the Iraqi health budget was cut by 90 per cent during the 1990s — as well as an inequitable health treatment policy.

Decades of weak primary health care have resulted in high rates of maternal and child mortality, and of malnutrition. Diseases like malaria and cholera are endemic in certain parts of Iraq and there is a drastic shortage of nurses, epidemiologists and public health administrators.

One of the first projects was to vaccinate all Iraqi children of five years and younger against measles, diphtheria, tetanus, whooping cough, tuberculosis, hepatitis B, and polio by the end of the year. The National Vaccination Days project is being sponsored by WHO, UNICEF, the US Government and the Iraqi health ministry. In addition, the Ministry of Health, with support from WHO, other UN agencies and external bodies, is re-establishing disease surveillance and public health programmes as well as an improved medical supply distribution system.

The UK's Department for International Development (DFID) and the European Commission have also funded a number of projects. The Government of Kuwait recently made a US$ 3 million donation to a Basrah hospital.

Dr Nabarro was optimistic that the Iraqi health bid would get a positive response from donors in Madrid but he said there was no guarantee.

"I think there is a good chance that the Health Sector will get support from investors – some conventional donor assistance through the Health Ministry, some as proposed partnerships between companies outside Iraq and the health authorities within the country, and some as support for local initiatives and NGO's," he said.