A new generation of non-profit drug companies and publicprivate partnerships is taking on the challenge of developing drugs and vaccines against diseases plaguing developing countries and traditionally ignored by the pharmaceutical industry because they lack profit potential.

Buying up the rights to develop and market drugs for "neglected" diseases from the drug companies who own them but have yet to develop them are a growing number of initiatives such as the US-based non-profit drug company One World Health and US based non-profit organization, the Aeras Global TB Vaccine Foundation.

The Bill and Melinda Gates Foundation announced on 12 February 2004 a US$ 82.9 million grant to the Aeras Global TB Vaccine Foundation to support the development of new vaccines to prevent tuberculosis (TB) which causes nearly two million deaths every year, the majority of which occur in developing countries. The grant, the largest ever for TB vaccine development, will allow Aeras to fund human trials of promising TB vaccines and early research on the next generation of vaccines.

Similarly, One World Health, received US$ 10 million from the Bill and Melinda Gates Foundation to test a promising new treatment for leishmaniasis (kala azar). It is estimated that around 350 million people in 88 countries are at risk of contracting this often-lethal disease but 90% of cases are concentrated in India, Bangladesh, Brazil, Nepal and Sudan, according to WHO. Some 1.5 2 million new cases occur annually.

The pharmaceutical industry has responded with its own initiatives. The development of drugs against malaria, a disease which kills almost a million people every year  mostly in Africa  has benefited from a recent agreement between Chongqing Holley Holding, a Chinese pharmaceutical company, Sigma-Tau, an Italian pharmaceutical company, Medicines for Malaria Venture, a non-profit organization and the University of Oxford. On 19 March, they signed an agreement for the international development of the anti-malarial drug, Dihydroartemisinin-piperaquine (Artekin). Unlike the conventional chloroquine and sulfadoxine-pyrimethamine treatments, artemisinin, from which the drug is derived, has not yet produced any known cases of resistance.

"Not only should this antimalarial be effective," said Dr Christopher Hentschel, CEO of Medicines for Malaria Venture, "our goal is also to be able to make it available at a cost that's affordable for people living on less than a dollar a day."

The US-based firm, Johnson & Johnson, announced on 30 March 2004 that it has granted royalty-free rights to the International Partnership for Microbicides for a vaginal medication to prevent HIV infection in women originally developed by the firm's subsidiary, Tibotec Pharmaceuticals. The partnership, also based in the US, will conduct the remaining trials of the drug, known as TMC-120, in order to gain regulatory approval. If the trials are successful the product could be on the market by 2010. Research into microbicides has previously been held up by a lack of resources and the absence of interest in the pharmaceutical industry. (See related news article, Microbicides preventing HIV infection could be available by 2010, in this issue of the Bulletin (2004;82:393). 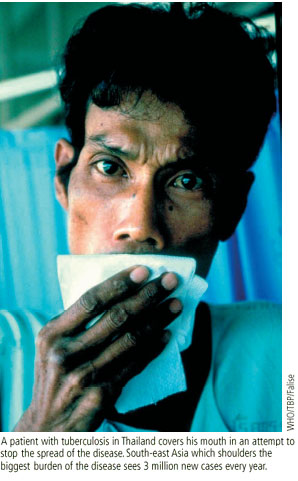 These examples are indicative of a growing trend in which non-profit entities, governments, international organizations and pharmaceutical/biotech firms are partnering to develop drugs or vaccines and make them accessible to needy countries.

"Publicprivate partnerships are not new  they started in the 1970s and built strength through the 1990s. But a few things have happened in the past few years. They've become consolidated and accepted, and they've scaled up considerably," said Robert Ridley, ad interim Director of the UNICEF/UNDP/World Bank/WHO Special Programme for Research and Training in Tropical Diseases (TDR) in Geneva.

There are nearly one hundred such partnerships, according to the Initiative on PublicPrivate Partnerships for Health at the Global Forum for Health Research, a non-profit group based in Geneva whose mission is to track such arrangements and help them perform more effectively. "Each of them has a unique structure, but the majority are involved in product development," said Roy Widdus, Project Manager.

The recent initiatives offer a window on how the new breed of publicprivate partnership functions. One World Health, for example, is using its Gates grant for clinical trials in Bihar, India, to assess the efficacy of paromomycin for the treatment of leishmaniasis.

In the 1990s WHO received a donation of paromomycin from Farmitalia  the Italian pharmaceutical firm holding the licence. Farmitalia was not interested in developing the drug on its own because of paromomycin's lack of potential to become profitable, given the expense of conducting clinical trials and the poor economic status of people most in need of it.

"We began with Phase I and II trials on the drug, but unfortunately, we ran out of funds and had to stop," said Philippe Desjeux, Medical Officer in charge of leishmaniasis control programmes in WHO's department of Communicable Diseases. "Then One World [Health] came to see us, looking for a project. I suggested they take over the trials and continue to Phase III, which they did. It's a nice example of the complementarity of efforts between a non-profit organization, industry, a foundation, and an international organization."

Another publicprivate partnership is seeking new preventive strategies against leishmaniasis. The non-profit US-based Infectious Diseases Research Institute and biotech company Corixa are working on the project with TDR. Phase I trials on a new vaccine were recently completed in the US.

According to Dr Farrokh Modabber, manager of the TDRInfectious Disease Research Institute Collaborative Project, a publicprivate collaboration was the only practical route for developing a leishmaniasis vaccine. "It's a risky, expensive and time-consuming business developing vaccines," he said. "It is unlikely at this time that any private company would undertake single-handedly a project for a vaccine against a disease affecting mostly poor countries."

Similarly, the only serious efforts to develop an effective vaccine against tuberculosis are taking place through the Aeras Global TB Vaccine Foundation.

Aeras announced in February that it would begin Phase II trials of two new vaccines against TB. The project has enlisted partnerships with scientists, academic institutions, governments, and companies in Europe, South Africa and other developing countries and the US. A clinical research site is already in operation in Cape Town, South Africa, where more than 9000 volunteers are enrolled in a clinical trial. Other sites are being considered in Peru and India. Aeras is also partnering with The Biovac Institute in Cape Town to manufacture vaccines for future Phase I and II clinical trials.

Other ambitious non-profit-generated drug development projects are in the pipeline. In July 2003, Médécins sans Frontières, the Pasteur Institute, TDR, the Oswaldo Cruz Foundation, the Indian Council for Medical Research and the Malaysian Ministry of Health together established in Geneva a not-forprofit entity, the Drugs for Neglected Diseases Initiative. The new group's objective is to develop treatments for African trypanosomiasis, Chagas disease  a parasitic illness affecting nearly a quarter of Latin America's poor  and leishmaniasis.

The push toward publicprivate partnerships is not without critics. According to Bernard Pécoul, Executive Director, the goals of the most widely publicized partnerships are not portrayed accurately. "Many of the most ambitious current projects will benefit rich countries as well as poor ones  the tuberculosis vaccine, for example. And although a vaccine and better treatment for kala azar [leishmaniasis] will help people in developing countries, they also have strategic interest for western countries, the US in particular, because its military personnel is at risk," he said. The cutaneous version of the disease, dubbed "Baghdad Boil," has infected 150 US soldiers serving in Iraq, according to newspaper reports.

"You don't see so much energy committed to a disease like trypanosomiasis, which affects as many as half a million people," continued Pécoul, "… [because] almost all of them are very poor and live in isolated areas of sub-Saharan Africa where tourists rarely venture."

At present only 10% of money spent on drug development is devoted to conquering 90% of the world's health problems. Pécoul remains sceptical of the contribution these new initiatives can make towards addressing this gap without a change in public policy.

"We will never find a solution to the 10/90 gap until we see a radical change in public policy  and there are not strong signs this is happening. It's great to have a money injection, as we've had lately, but we need sustainable solutions," said Bernard Pécoul.

Contributions are welcome for the Letters section, in response to articles that have appeared in the Bulletin or on matters of major public health importance. Letters are usually between 400 and 850 words, with a maximum of six references; they will be edited and may be shortened.
Manuscripts should be submitted to the Bulletin via our submissions web site accessed at http://submit.bwho.org or via a link from www.who.int/bulletin where there are "Help" and "FAQ" (frequently asked questions) buttons to assist authors.