Rousseau's "social contract": contracting ahead of its time? 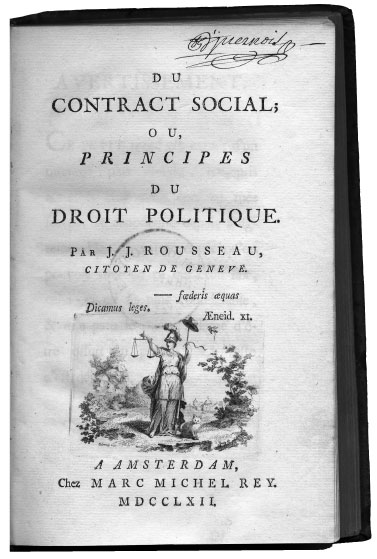 Jean-Jacques Rousseau, born in Geneva in 1712, had an important influence on political philosophy in the 18th century and since, in particular through his book The social contract, published in 1762.1,2 This monumental work is part of the family of older, major writings on social contract theory by Thomas Hobbes (1588-1679) and John Locke (1632-1704).

The relationships between individuals, the state and government form the key components of Rousseau's "social contract". A first principle to govern these relationships is that man has no natural authority over other human beings and sheer force exercised by one individual over another does not justify authority. Rather, legitimate authority must find its rationale in so-called social pacts or contracts.2 Secondly, competition among men will stimulate the need for a social pact, so that each can preserve oneself and be protected by the "general will" enacted by the people.3

The social contract purports to provide a proper alternative to the "state of nature". For Rousseau, the state of nature was initially peaceful, with this harmony attributable  among other things  to the small size of the population, the abundance of nature and the absence of competition.3 Gradually society became more complex, introduced private property and created new forms of dependence among men, resulting in economic and social inequalities. The state of greed and competition that came into being led Rousseau to propose a new social pact, in broad agreement with Hobbes. Hobbes proclaimed men to be rational and interested in such a social pact, as it would bring them a better life compared with the state of nature.3 In addition, for Locke, a particularly strong reason to abandon the state of nature and for men to contract with civil government was the emergence of war.

Rousseau compares the social contract to an "act of association" whereby there is reciprocal commitment between the state and the individual. The individuals as citizens share sovereign power, but as subjects put themselves under the laws of the state. Rousseau also defines government as one of the principal actors: it is an intermediary body between the subjects and the state with the main tasks of executing the laws and preserving civil and political freedom.2

Interestingly, Rousseau uses economic reasoning in the evaluation of the social contract, by comparing losses and gains: "What man loses by the social contract is his natural liberty and an unlimited right to everything he tries to get and succeeds in getting; what he gains is civil liberty and the proprietorship of all he possesses".2 (Note here that "natural liberty" is constrained by the physical power of the individual, whereas it is the general will that defines the contents of "civil liberty". In addition, "property" is based on a legal title whereas "possession" is the result of man exercising force.) According to Rousseau, the result of this kind of cost-benefit analysis is clearly positive: individuals will get net benefits, as the social contract will preserve them and protect them through the general will which is shaped by the same individuals. Furthermore, the adoption of a social contract is rational, as without it the state of nature (which is also referred to by Rousseau as a "primitive condition") is put under such pressure that it would collapse.

How can we now assess Rousseau's social contract within the context of the development of contractual arrangements, such as in the health sector?4 The social contract is focusing on principles of political organization and cooperation at the highest levels of society, and its usefulness for practical approaches at the micro- or meso-levels is scant. In particular, the process of seeking agreement for specific contracts does not find ready and practical advice in Rousseau's book, but its principles help in understanding the rationale for cooperation in the health sector. For example, a country may experience the uncontrolled development of nongovernmental organizations whereby they develop infrastructure and offer health services according to their particular preferences, constraints and possibilities. The country may judge that cooperation between the public and private health sectors (including such organizations) is needed to respond coherently to society's public health objectives, thereby aiming at enhancing efficiency and equity. The social contract facilitates here, albeit indirectly, by making a case for abandoning a free and anarchic situation (which could conceptually be likened to the state of nature) and for adopting a cooperative approach.

The way Rousseau looks at the net benefits of a social contract is also helpful in backing up the need for cooperation in the health sector, as contracting in the health sector is also expected to realize such net gains. Using the above example of the presence of nongovernmental organizations in a country's health sector, an official social contract would allocate them a proper role. A number of rules would certainly need to be respected, but with the advantages that their position would be clearer and more transparent and they would gain a kind of official liberty to act (akin to individuals in the social contract losing natural liberty but gaining civil liberty). Defining the legal right of property is also essential for nongovernmental organizations that have already invested in the health sector, or will do so, and are interested in safeguarding their investment through a property title.

In the practice of contracting, a multitude of contractual arrangements can be observed. Again, is there anything that we can learn from The social contract? Rousseau highlights the rationale for cooperation but does not address implementation issues as such. One type of contract has a number of elements in common with the social contract, namely the "framework convention" (convention-cadre or accord-cadre).5 This type of agreement defines the principal actors and the broad objectives of cooperation and determines the roles of each of the actors; implementation issues are not part of a framework convention but are treated subsequently in specific contractual arrangements. Increasingly, therefore, the public health literature uses the term social contract in the study of framework conventions or other broad agreements. In reviewing the 2002 reform of the primary health care strategy in New Zealand, Howell refers to new agencies, primary health organizations, that receive funding for primary health care, coordinate delivery of care and manage service delivery contracts. Howell states that these organizations form a new actor together with taxpayers, patients and government "in the social contract for overseeing the purchase and delivery of subsidized health care".6 Other researchers of health sector changes and reforms and the accompanying new and broad agreements are also making use of the concept of a social contract.7,8

To sum up, it seems clear that Rousseau's social contract was an idea in advance of its time, though it will not be able to furnish operational support for the establishment of contracts. Nevertheless, this publication was very early to show the rationale for cooperation among actors and to indicate the overall net benefits; practitioners and researchers of contracting can hardly be indifferent to this salient feature of the 18th-century social contract. Rousseau died in 1778. His work continues to attract the interest of social scientists, and new interpretations of the social contract are being developed, such as in game theory.9 For all Rousseau's fame, it is ironic that The social contract was banned at the time of its publication, both in Geneva and France (admittedly for religious reasons) and that Rousseau had to flee to avoid arrest.

3. Social contract theory. In: The Internet encyclopedia of philosophy. Available from: http://www.iep.utm.edu/s/soc-cont.htm

This section looks back to some ground-breaking contributions to public health, reproducing them in their original form and adding a commentary on their significance from a modern perspective. To complement the theme of this month's issue, Guy Carrin reviews Jean-Jacques Rousseau's 18th-century proposition of a "social contract", the frontispiece of which is reproduced opposite in this issue.