In search of a sustainable philanthropy

Philanthropists are important funders of health care in developing countries, but their funding can be unreliable and misdirected. One philanthropist found that the best way to establish a health-care project of lasting benefit was to address unmet needs in the local health system, listen to the experts and work closely with local partners.

Nairobi, Kenya will soon see a brand new women's hospital offering free treatment to women. It comes courtesy not of the government, nor of the usual international aid agencies, but of an unlikely collaboration between a local obstetrician and the mother of the world's most famous basketball star.

Deloris Jordan, mother of Michael, has long been active in local philanthropy in the United States and her home city, Chicago, working through the James R. Jordan Foundation, named after her late husband. She first went to Kenya 13 years ago, bringing American children on a cultural visit. She ended up bringing back a young Masai man and putting him through an MBA course. He has since returned to Kenya to build a tourism business in his community. Deloris Jordan has returned many times since, but her visit three years ago, she says, changed her life.

"I went back to Kenya in 2003, at the invitation of the vice-president, for the 40th anniversary of independence. I was invited to visit the Nairobi Women's Hospital with about 40 beds. The line outside was long, but they were all treated whether they had money or not. I met the staff there, and later when the hospital's founder Dr Samuel Thenya came to the United States on a visit, I flew to Washington to meet him, because I wanted to know why a young man would set up a women's hospital. I started working with him to try to get the hospital some equipment, including some of the things our hospitals throw away."

Mrs Jordan says she is determined that her project will be more than a rich person's plaything, or a pathway to recognition. "I found that working in Africa and especially Nairobi, it's vital to learn about their culture, not trying to take over but learning from them what their needs are."

"I learnt a lot from my visit to London on World Health Day in April," she says, referring to the launch of The world health report 2006: Working together for health, which highlights the plight of 57 developing countries with serious shortages of health workers. "I wanted to learn how to really reach out into the villages, to truly make a lasting difference." She describes Mary Robinson, former president of Ireland and former UN High Commissioner for Human Rights, as a fountain of useful advice.

A key message that Mrs Jordan took from the WHO event was the need to retain staff in a continent where health workers are continually seeping away in search of a better living abroad. "I found that some of Dr Thenya's health-care staff and nurses were looking for work abroad. This is, of course, a big problem in Africa. They need to feel needed there, and that they have a future there. They need decent benefits. It's the only way a project will last." One of the hospital's immediate goals is to set up an exchange programme to train nurses and other staff in the United States. 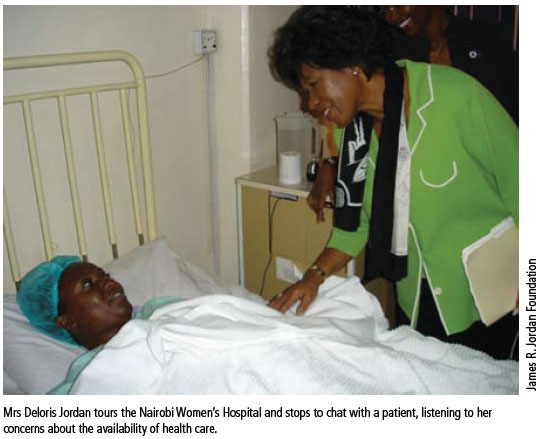 "For me, it's all about networking and partnership, not just here but also in Kenya. We talked to the mayor of Nairobi and the parliament about a better facility." The city council has donated land for a larger 150-bed hospital. The plan is to move the old hospital's staff to the new facility and replace much of the old equipment. Completion is planned for 2010, at an estimated cost of $20 million.

"My main role was networking in the United States, to try to get some of this equipment that Pfizer and so on don't need. I later partnered with the Clinton Global Initiative. When (former) President Clinton visited Nairobi, they told him I'd been there, and he called me to find out what I was doing. He then began to help Dr Thenya, providing some medicines for the AIDS patients there."

Doctor Thenya is no mean networker himself. He originally built the hospital as a private venture to cater to Nairobi's well-to-do women, using funds from 16 local doctors and health industry figures who became shareholders. But the charitable  and unprofitable  side of the hospital grew into a magnet for women from villages near the capital who have historically been excluded from gynaecological services.

So he cast his net wider, says Deloris Jordan. "He has partnered with some of the corporations there, including Coca-Cola and Nestle Tea. USAID is supporting him too."

Katherine Marshall, Director of the World Bank's Development Dialogue on Values and Ethics, and formerly responsible for the Bank's Africa programmes, says Mrs Jordan's project meets all the criteria for a sustainable project.

"It needs a long-term commitment, and this is often lacking in private philanthropy. I remember visiting a great AIDS clinic in Ethiopia that did wonderful work. They had a plaque listing all their private donors down the years, but it was striking how donors' names would appear for three or four years and then disappear as they lost interest. This left the clinic constantly scrabbling for new donors."

"Also, the project should ideally address unmet needs in the health system. These are best identified by people who live and work there, so it's vital to work closely with local partners. Normally, the best way to achieve this is to work within the existing health system. But it is possible, though difficult, to set up a hospital on its own that becomes a little jewel, and can serve to elevate the whole health infrastructure around it," Marshall says.

"I recently visited a hospital in Cambodia that fit this bill perfectly. There is an argument that working through health ministries just increases the opportunities for money to disappear," she says, referring to Sihanouk Hospital Center of HOPE in Phnom Penh, which counts among its sponsors Japanese philanthropist Toshu Fukami and rock singer Elton John. Indeed, health workers in Cambodia frequently estimate that 510% of the country's health budget disappears before it is even disbursed by the finance ministry.

While western governments have often seen millions disappearing down bureaucratic black holes, Deloris Jordan says her approach of working with local doctors and international companies with a Kenyan presence is the best guarantee against corruption.

As the only hospital in Kenya devoted to women's health, the Nairobi Women's Hospital certainly fills an unmet need. One of its key projects is the Gender Violence Recovery Center. A vital service is the free documentation of sexual assault. Rape victims in Kenya are often unable to lay charges because they cannot afford medical documentation of the assault, which typically costs 14 000 Kenyan shillings (US$ 190). The centre also provides free counselling and emergency contraception to rape victims.

"It's a great centre that does amazing work," says Nomi Fuchs-Montgomery, Kenyan Core Team leader at the US State Department's Office of the Global AIDS Coordinator.

Indeed, the success of this private philanthropic initiative is attracting some decidedly public interest. British Robinson, Senior Advisor for publicprivate partnerships at the State Department's AIDS project, says she would very much like to speak to Mrs Jordan "on how to further leverage her initiative by partnering" with the US President's Emergency Plan for AIDS Relief (PEPFAR).

SciELO Analytics
Dimensions
In search of a sustainable philanthropy
PlumX