Change is in the air in global health. Many top posts in the world's international public health organizations have changed hands over the past year or two. And, as the Bulletin was going to press, the sad news came of the untimely death of WHO's Director-General Dr Lee Jong-wook at the age of 61, prompting the need for a change of leadership at the top of WHO itself.

Among recent, high-profile changes in public health positions: Dr Derek Yach took over as Global Public Health Director of the Rockefeller Foundation in January 2006 and Dr Richard Feachem has announced he will be stepping down as executive director of the Global Fund to Fight AIDS, Tuberculosis and Malaria at the end of his five-year term in July. Dr. Tachi Yamada will leave GlaxoSmithKline to take over the global public health programme at the Bill & Melinda Gates Foundation on 1 June; the John E. Fogarty International Center division of the United States National Institutes of Health recently appointed a new director, Dr Roger Glass and one of the leading international research institutes in Asia, the International Centre for Diarrhoeal Disease Research, Bangladesh, is looking for a new executive director.

Experts say that this flurry of changes is probably due to a mix of circumstances, all feeding into global trends in the field. Some of the movement is due to increasing opportunities in public health worldwide, fed by a proliferation of the organizations that are dedicated to the issue. As research increasingly finds connections between development, public health and globalization, the public health sector has grown larger and more influential than it was a few decades ago.

Few will comment on what the individual leadership changes mean, but everyone agrees that good leadership is vital for the success of an increasingly dynamic and competitive sector. "The opportunities for people in global health have moved dramatically beyond a few positions in academia. It's a very dynamic sector and becoming increasingly competitive," says Yach.

Universities have noticed this development: today 20 accredited schools of public health in the United States offer courses in international public health, according to the Association of Schools of Public Health in Washington, DC. These graduates go on to work in disaster-relief organizations, migrant-refugee health organizations, research and academic institutions, international agencies, various other NGOs, lending agencies with projects in developing countries, multilateral agencies such as the WHO and other governmental agencies.

The proliferation in groups has contributed to another trend, according to Yach: "With that dramatic increase in activity and funding has come a wider array of activities in play by many of them," he says, adding that this may result in a smaller share of resources being devoted to more traditional public health challenges, such as infant mortality and vaccine-preventable diseases.

Dr Andres de Francisco, Deputy Executive Director of the Global Forum for Health Research in Geneva, however, notes that today's crop of new NGOs and other public health groups is better equipped to address issues that have fallen through the cracks of the mainstream global public health agenda, such as developing new drugs for neglected diseases.

Even as organizations expand and receive more money, awareness is growing that more can be done with less, and that tweaking a programme or providing a simple preventative intervention can exponentially augment results. Against this backdrop, the amount of funds being poured into or pledged for public health efforts worldwide has never been greater, and a can-do attitude in global public health  that problems can be solved with the right commitment  is growing too.

The new global public health leaders, however, face many challenges. For example, the new leaders urgently need to address inter-agency cooperation. "I think the deeper issue that people are recognizing is that there isn't a mechanism for these different institutions to talk together to see how they can work more effectively together," Yach points out.

For instance, with major multi-billion-dollar initiatives to fight HIV/AIDS several questions arise: are they working in the most effective way in terms of policy? How should they interact with the World Bank and other players? And is there interaction in terms of the money that is needed by people on the ground? These are some of the challenges for global health leaders, Yach says.

This situation promises to develop into what Yach calls a "contested future" in global public health, but also a healthy competition that he hopes will result in "some sense of vision emerging" over the next few years.

A major challenge for global leaders will be how to reconcile the technical-fix approach with access to innovations, Yach says. Dr Joel Breman, Senior Scientific Advisor at the Fogarty International Center's Division of International Epidemiology and Population Studies, agrees that, in future, action in the field will be linked closely with modern science and technology. Later on, that goes hand-in-hand with implementing findings on molecular medicine and understanding genetic predisposition to disease. 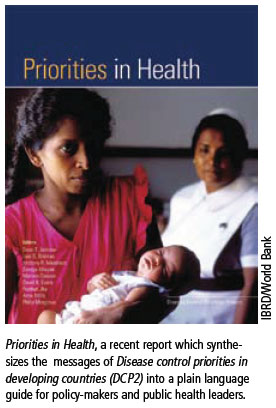 "This is going to be the century of molecular medicine and of understanding disease pathogenesis, meaning how different people acquire and then manifest disease at the cellular and then at the molecular level, rather than  as in the past century  in the organ and whole-body level," says Breman, who is a co-author of the second edition of Disease control priorities in developing countries (DCP2) (see picture).

"There are ways of designing new interventions based on that understanding. So let's talk about prediction and prevention rather than detection and response," Breman says.

Optimistic, Breman points to increased awareness as a precursor to action. "If the political will is there, then money follows and programmes follow and people get energized down the line," Breman says. "And those of us in public health are excited about this and want to take advantage of it."