Recent news from WHO

 Dr LEE Jong-wook, Director-General of the World Health Organization, 61, died on 22 May, two days after surgeons at Geneva Cantonal Hospital removed a blood clot from his brain. "The sudden loss of our leader, colleague and friend, is devastating," WHO said in a statement. Dr Lee was the first WHO Director-General to die in office. Dr Anders Nordström, Assistant Director-General for General Management, took over as Acting Director-General. News of Dr Lee's death came as representatives from WHO's 192 Member States gathered for the first day of the World Health Assembly (WHA). Delegates paid tribute to Dr Lee and his achievements and staff sent messages of condolence to his family. 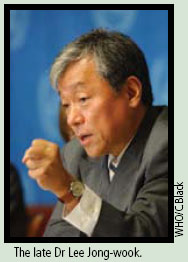  At the WHA, the annual meeting of WHO's top decision-making body, from 22 to 27 May, delegates discussed topics, including: pandemic-influenza preparedness and response; child nutrition; HIV/AIDS; polio eradication; sickle-cell anaemia; destruction of variola virus stocks; prevention of blindness; international trade and health; tobacco control; and intellectual property rights. The keynote speaker was His Royal Highness, The Prince of Wales.

 WHO called on all research institutions and companies on 19 May to register all medical studies that test treatments on human beings, including initial studies, whether they involve patients or healthy volunteers, as part of the International Clinical Trials Registry Platform initiative. (See stories on pp. 429431)

 WHO announced on 11 May that a group of 13 pharmaceutical companies had agreed to comply with WHO's recommendation to phase out single-drug artemisinin medicines for oral treatment of malaria.

 A new WHO report, Fuel for life: Household energy and health, released on 4 May showed that halving by 2015 the number of people worldwide who cook with solid fuels by providing them with access to liquefied petroleum gas would cost a total of US$ 13 billion per year and would provide an economic benefit of US$ 91 billion per year. http://www.who.int/indoorair/publications/fuelforlife.pdf

For more about these and other WHO news items please see: http://www.who.int/mediacentre/events/2006/en/index.html