Demand for male circumcision rises in a bid to prevent HIV

Demand for male circumcision as a method of combating HIV/AIDS is likely to increase dramatically if the results from two studies, in Kenya and Uganda, are positive. Public health experts are warning men, however, that circumcision may reduce the risk of HIV infection but it does not provide full protection.

The results of two studies, in Kenya and Uganda, are eagerly anticipated following last year's study carried out in Orange Farm, South Africa, which was stopped early because it showed a significant protective effect of circumcision. It is not known whether the current Kenya and Uganda studies that are due for completion in 2007 will confirm the results of the Orange Farm study, but there are signs that the demand for safe and affordable circumcision services is growing fast, particularly in Botswana, Lesotho, Swaziland, the United Republic of Tanzania and Zambia, and in South Africa too.

Public health experts say that countries in southern Africa with very high HIV prevalence and low circumcision rates and where the spread of HIV is predominantly via heterosexual sex may want to consider doing acceptability, feasibility and costing studies for making male circumcision widely available.

The results of the Orange Farm study in South Africa have been widely publicised in the region and discussed by leaders, members of parliaments (MP), health workers, the press and general public. As a result, there are already indications of increasing demand for male circumcision in traditionally non-circumcising societies in southern Africa. At the University Teaching Hospital in Zambia, demand has grown from 1 to 15 a month with a three-month waiting list. Demand at one Swaziland hospital is reported to have risen from less than one per month to 40 a month. Marwick Khumalo, a Member of Parliament (MP) for Lobamba in Swaziland was quoted in the local press: "All male children should be circumcised. To show my seriousness, I have taken all my sons for circumcision." Kenyan MP Jimmy Angwenui said: "In order to stop the spread of HIV/AIDS male circumcision should be made mandatory by the government."

In Swaziland, the health ministry backed a workshop in January to train 60 doctors and nurses in circumcision, responding to what it called a surge in demand. There were so many volunteers to be demonstration-and-practice patients during the training session that a hundred men had to be turned away. Daniel Halperin, Prevention and Behavior Change Advisor for the South Africa Regional HIV/AIDS Programme says: "There is already high demand for male circumcision in Swaziland following a lot of publicity in the local press and radio. Public health facilities are already overwhelmed and men are being turned away and put on a waiting list which is currently around eight months long".

There would be many advantages to male circumcision, were it to be confirmed as a means of preventing HIV: it is relatively inexpensive, it can be carried out over a wide age range and it is a one-off intervention conferring lifelong reduced biological risk. François Venter, Clinical Director of Reproductive Health and HIV-Research at the University of Witwatersrand, Johannesburg advocates male circumcision as one of the best protective measures. "Male circumcision is the most powerful intervention we have at this point in time. It is phenomenally effective," he told the Bulletin. "One of the beauties of circumcision is that it is a one-off operation which takes 1620 minutes but then has a profound effect on the rest of a man's life. Whereas to promote condom use or microbicides, repeated long-term promotion is needed."

Data from cross-sectional observational studies conducted since the mid-1980s have shown that circumcised men have a lower prevalence of HIV infection than uncircumcised men. But the Orange Farm study backed by Agence National de Recherches sur le Sida (ANRS) was the first randomized controlled trial to show such an effect. The trial randomized 3274 men to either circumcision or to a control group (PLoS Med 2005; 2:e298). A panel of experts stopped the trial after an average of 18 months follow up. There were 20 HIV infections in the intervention group and 49 in the control group, corresponding to a 6075% protection rate. The study authors state: "Male circumcision provides a degree of protection against acquiring HIV infection equivalent to what a vaccine of high efficacy would have achieved. Consequently male circumcision should be regarded as an important public health intervention for preventing the spread of HIV." 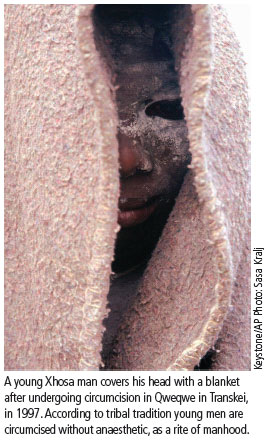 The two further randomized controlled trials, currently ongoing in the Rakai region of Uganda and the Kisumu region of Kenya, are supported by the National Institutes of Health of the United States. The Uganda trial is in a rural setting and involves 5000 participants aged between 15 and 49 years. The Kenya trial involves 2784 men aged 1824 in an urban setting. The two trials are due to be completed in 2007, and an interim review of the data was due to be conducted by the Data and Safety Monitoring Board in late June 2006. A further randomized trial assessing the impact of male circumcision on the risk of HIV infection in female partners is currently under way in Uganda with results not expected until late 2007.

Circumcision can be risky if it is performed in unsterile conditions. It can lead to infection, bleeding and permanent injury, or HIV infection from non-sterilized "instruments", and possible death if appropriate treatment is not provided. Every year the authorities in the Eastern Cape of South Africa report deaths and serious complications from botched circumcisions of young boys carried out by traditional healers.

There are other concerns about circumcision. During the healing period, sexually active men are likely to be at higher risk of HIV infection. During this time  approximately three to four weeks  men should be instructed to refrain from sexual activity. There are opponents of male circumcision who see it as a violation of human rights, particularly if carried out on children or adolescents. But perhaps the largest potential problem with circumcision is the false perception of security. Male circumcision is not a magic bullet and does not provide full protection. If men perceive they are fully protected then it could lead to a decrease in condom use or an increase in risky sexual behaviour. This was seen in the Orange Farm study when the intervention groups had significantly more sexual contacts. Dr Venter says: "There is a danger that men will see circumcision as an invisible condom and take part in more risky sexual behaviour. However, it would be the same with an HIV vaccine. The message has just got to be put across carefully that circumcision is part of the jigsaw puzzle of prevention." Male circumcision needs to be promoted as part of the range of methods to reduce the risk of HIV, including avoidance of unprotected penetrative sex, reduction in the number of sexual partners and consistent condom use.

The cost of male circumcision varies depending on where the operation takes place and who performs it. However, data from Nyanza, Kenya suggest that circumcision can be done in medical facilities for about US$ 25 per procedure. This includes US$ 8 for medical expendables such as sutures and needle, bandaging and analgesics, US$ 7 for surgical preparation (preparing the room, cleaning linens, sterilizing instruments, and US$ 10 in overheads (physician's fee, maintenance of room and equipment). Professor Tom Quinn from Johns Hopkins University told the 2006 Conference on Retroviruses and Opportunistic Infections that he calculated that 16 operations would prevent one incident HIV infection over 10 years. The cost per HIV infection averted could be as low as US$ 1052, if protection occurs in both sexes, making circumcision extremely cost effective.

The current position of WHO is that safe circumcision should be provided where people want it but that a policy decision on whether to promote it should wait until the results of the Kenya and Uganda trials are available. In the meantime a UN Work Plan on Male Circumcision is being implemented to help countries improve the safety of their circumcision practices. WHO has produced a technical manual, Male circumcision under local anaesthesia, which addresses the provision of safe male circumcision services for newborns, adolescents and adults and gives detailed technical information on the different surgical approaches.

If the two ongoing trials are positive then governments in sub-Saharan Africa may want to decide whether to commit funds to train medical staff and provide appropriate equipment and facilities. Dr Puren says: "It will put further stress on a health-care system already straining to roll out an ARV (antiretroviral) programme."

Bailey warns: "People want the services. If they are not provided with the services they will seek unqualified practitioners who will exploit the situation. We have to build the capacity to provide safe and affordable services." Venter adds: "There are already long queues for circumcision in South Africa so there will need to be careful planning. We need to train more people to carry out the operations safely. There is no need for doctors to do it. It is a simple procedure that trained technicians could carry out."

When should circumcision take place? One option would be to promote routine circumcision of infants, possibly as part of the antenatal care package. Botswana, in fact, took a policy decision to offer this some years ago but it has not been implemented. Circumcising at this age would reduce the complications that result from traditional circumcision rites in adolescence. But the major benefits of preventing HIV infections would take more than 20 years to be realised.

The other alternative is to offer circumcision through health facilities, and possibly schools and youth centres to young men before they become sexually active. Dr Venter believes a proactive recruitment programme should be carried out. "We need to incentivize circumcision. For example every man who comes forward should be given 100 rand (US$ 14.50)."