Days after a devastating earthquake hit two Indonesian provinces, 6000 health workers from across the country were dispatched to the disaster zone. To help Indonesian Government efforts to provide emergency health care, WHO has been coordinating dozens of international organizations and charities to aid survivors.

Within hours of a 6.2 magnitude earthquake that hit the Indonesian provinces of Yogyakarta and Central Java on May 27, a massive relief effort, comprising both Indonesian and overseas organizations, got under way. A fortnight after the quake, approximately 75 international nongovernmental organizations (NGOs), and more than 10 government teams and UN agencies had sent personnel and supplies to the stricken region to support the Indonesian Government's own relief efforts.

WHO's role was as the lead agency of the Health Cluster, set up in June 2005 as one of the key components of wider humanitarian reforms within the UN. At the country level the Health Cluster's role is to coordinate the health response. The Cluster system proved successful in the South Asia earthquake in 2005. In Indonesia, this approach helped to involve most of the NGOs engaged in relief efforts in efforts to assist the two provincial health authorities, as they grappled with the aftermath of the quake: over 5700 dead, nearly 38 000 injured, 470 000 dwellings damaged or destroyed and 1.5 million people affected.

"WHO's main role is supporting the Indonesian Government in its work responding to the emergency situation, particularly on human health-related concerns, and WHO has been in close relationship in supporting the work of the Ministry of Health (MoH)," says Dr Arturo Pesigan, Head of the Health Cluster in Yogyakarta.

Unlike the December 2004 tsunami which devastated the province of Aceh, the area affected by the 27 May earthquake was far more localized. It has been easier to obtain accurate numbers related to its effect on the population and therefore an easier task for government agencies and NGOs to get aid to where it is needed. The rapid government response is also, arguably, related to the region's importance, whereas Aceh is on the periphery, the island of Java represents the heart of Indonesia and Yogyakarta is the spiritual and cultural centre of the island.

"Yogyakarta and Central Java provinces have not been overwhelmed. At the national level the earthquake was not even declared a national disaster. Indonesia didn't call for international assistance, but welcomes it," says Charlie Higgins, the UN's Area Coordinator in Yogyakarta. "The government rapidly moved in 6000 health workers from within Indonesia to reinforce local structures," he adds.

The experience of responding to the aftermath of the tsunami  although on a much larger scale to the disaster caused by the May earthquake  stood WHO in good stead to respond to the current emergency, says Pesigan, who is also the Regional Advisor for Emergency and Humanitarian Action from WHO's Office for the Western Pacific Region.

"Like we did in the tsunami, WHO supported the immediate establishment of the crisis centre for the provincial level health response. It was crucial to establish good coordination mechanisms with the government and all the players in the health sector. WHO mobilized its team within a few hours. Vehicles and essential supplies were immediately dispatched. Preparedness strengthened from the tsunami experience facilitated the establishment of a logistics system that readily provided personnel, transport, equipment, medicines and supplies and support was immediately provided from the country office, the regional office and headquarters," Pesigan explains. 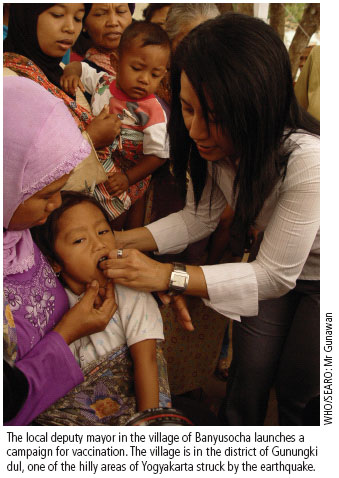 The large number of orthopaedic injuries and the risk of disease are the main medical issues. There has been an increase in the number of tetanus cases reported. "Surveillance for communicable diseases is one of the priority concerns of the WHO, the MoH and the Health Cluster," says Pesigan.

A few days after the earthquake struck, WHO urged donors to make sure their donations were appropriate before shipping them, as sending the wrong items could hamper rather than help the relief effort. Still, donated drugs which are unfamiliar to the country's medical staff, flooded into the area, presenting a logistical challenge to local health officials.

This has led to a request for donations of only locally procured drugs from now on, and the Indonesian Government has also announced that the only shortfall in terms of personnel is orthopaedic specialists, it is also short of orthopedic medical supplies and equipment.

As the effort to clear rubble and begin the process of housing reconstruction gets under way, the risk of exposure to tetanus increases. In coordination with the Ministry of Health and UNICEF, WHO is implementing a plan to immunize the entire over-15 population in the affected area  some 1.3 million people  with a booster dose of tetanus-diphtheria. Children aged six months to five years will be vaccinated against measles. Vitamin A is also being distributed.

Although water supplies and sanitation were affected by the earthquake, there have been no major health problems associated with the lack of water. UNICEF is coordinating efforts to distribute over 320 000 litres of water and set up the estimated 31 000 latrines that are required.

"It's not a desperate situation. There are some problems with sanitation and water supply but people are not crowded into camps and most sanitary facilities remain intact or can be repaired," says Higgins. UNICEF is also responsible for education and temporary tent-based schools have been set up in order to maintain some semblance of continuity in education, pending the government's reconstruction of the 400 schools affected.

However, with hundreds of thousands of people made homeless, reconstruction of housing will be a mammoth task, as is the provision of temporary shelter in the meantime. According to the UN Office for the Coordination of Humanitarian Affairs (OCHA), there are estimates of emergency shelter coverage for only 12 of the approximately 80 sub-districts in the two affected provinces and even where coverage is known, it is only 65% on average.

Basic food assistance is being provided by the Indonesian Government in the form of rice rations, supplemented with World Food Programme fortified noodles and biscuits. The quake affected an area of rich farmland that produces a surplus of food, but caused only limited damage to irrigation, says Higgins.

In the medium term, food supplies are expected to recover, but, in the short term, there have been inevitable bottlenecks: "There have been reports in the media about problems of delivery of food. Some gaps in sanitation have been identified. There were also complaints of waiting lists in hospitals," says Pesigan. "Though there may be problems, the concerted efforts of the national and international agencies have been working hard to address the deficiencies."