The pharmaceutical industry fears that WHO's clinical trials initiative may limit companies' ability to compete and dent profitability, as compliance  which is voluntary  will mean having to apply for patents earlier than they currently do. Some companies have pledged to adhere to the recommendations, nonetheless. Others may resist.

WHO's newly proposed rules on the disclosure of data when researchers register clinical trials they are planning has drawn a mixed reaction from corporations, academic and other institutions funding pharmaceutical R&D.

The pharmaceutical industry fears that companies may refrain from doing R&D in certain fields, firstly, because they would not want to make sensitive information public too early  as required under the initiative  as it would become available to their competitors, and secondly, if they are unable to protect their innovations with patents.

The International Federation of Pharmaceutical Manufacturers and Associations (IFPMA) stated clearly it does not agree with the final vision WHO presented on 19 May of how the International Clinical Trials Registry Platform (ICTRP) initiative will work (see Bulletin Vol. 84, No. 6, June 2006) but that it was prepared to work with WHO to develop a new concept that addresses these industry concerns.

"Whilst the industry shares other stakeholders' concerns about ensuring adequate transparency," IFPMA Director Harvey Bale tells the Bulletin, "it believes that the WHO position is a reflection of the views of some stakeholders, but it is not a consensus".

"The IFPMA, in conjunction with its member associations and companies, will work with the WHO, national drug regulatory authorities and other stakeholders to reach a final consensus position on the ICTRP," Bale says, noting that the Geneva-based industry association had launched its own "transparency platform", the IFPMA Clinical Trials Portal, in 2005, which it would continue to develop in the meantime.

For Dr David Korn, Senior Vice President in the Biomedical and Health Science Research division of the Association of American Medical Colleges, the reaction to what he called a "bold" and "frankly unexpected" move to include early phase trials, comes as no surprise. "In all of my interactions with industry leaders, they have always argued that disclosure of early phase research, often dubbed 'hypothesis-generating', as contrasted with 'hypothesis-testing', would be unacceptable to them," he says.

Guy Willis, IFPMA Director of Communications, cites as daily preoccupations of industry players: fierce competition, shareholder expectations, and, above all, the crucial issue of patentability  a weakening of which could dent profits.

Patents are the life blood of the R&D-driven segment of the industry and a company's ability to stake a claim with a new product, a key competitive factor. The timing of that claim  broadly speaking: the later, the better  is critical, though more so in Europe than in the United States where patent law enshrines the principle of‘first to invent' as opposed to 'first to file'. Late application for a patent gives a trial sponsor time to realize the full potential of what he has developed, and, as Willis puts it: "The later you patent, the later your patent expires." Late application for a patent implies, in turn, the late release of results because, Willis argues, once the results have become public, acquiring the patent becomes problematic. Andrew Freeman, Director of R&D Policy at GlaxoSmithKline shares Willis's concerns: "Early disclosure of drug names and trial outcome could, in rare circumstances, prevent patentability or give away novel ways of assessing the effects of investigational medicines," he says.

Outside of the pharmaceutical industry, such arguments find few supporters. "The trial sponsors have no reason to refuse to register their protocols, which is the only way to make sure that the interest of patients is protected," says Professor Silvio Garattini, Director of the Mario Negri Institute in Milan, while Davina Ghersi, a senior research fellow at the University of Sydney, points at out that after extensive consultation with the pharmaceutical industry regarding the minimum data set, none of the parties who objected to the public release of data were able to provide concrete examples demonstrating how full disclosure at the time of registration had given rise to negative outcomes for the trial or its sponsor. "The WHO Platform Secretariat reporting in the Lancet stated that the arguments for delayed disclosure were neither convincing nor compelling," she says  a position, which, when presented to IFPMA's Willis, drew a terse: "That's one point of view."

The debate is further clouded by the fact that there are already wide variations in the disclosure of clinical trials data. Exploratory trial information is, in some instances, available for a fee. So why not formalize disclosure as per the WHO's minimum data set?

For Dr Gerd Antes, Director of the Cochrane Center in Freiburg, Germany, the question is deeply puzzling. "It is hard to understand [the pharmaceutical industry's] argument on early phase trials results without thinking in terms of hidden agendas," he says. Antes suspects that clinical trials sponsors' reluctance to embrace the WHO initiative may have to do with murkier arguments than those generally put forward, something trial sponsors vehemently deny. 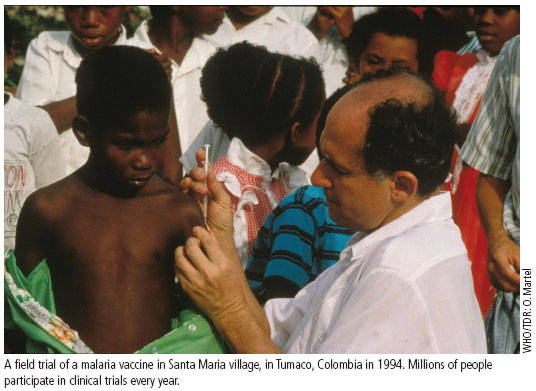 Antes' view is shared by others in the research community who say that pharmaceutical companies have become used to doing clinical trials outside the public spotlight. What little pressure there is to conduct human trials on an ethical basis comes from the ethics boards. But in developed countries these are often peopled by 'retired university professors' with little appetite for controversy, while in developing countries they often lack people with the relevant expertise. Add to this, a significant number of small-to-medium-size companies in some countries with perhaps only one or two drugs in their portfolio  drugs which may have been developed and tested in less than optimal conditions  and you have a recipe for inertia, some in the research community say.

Professor Jacques Demotes, Coordinator of the European Clinical Research Infrastructures Network (ECRIN) and a clinical researcher in Bordeaux, paints a similar picture of relatively unregulated clinical trials in France. It is a landscape he doesn't think all bad. "A lot of good research and good drugs have come out of academic institutions that did not necessarily observe the strictest clinical trials protocols," he says. "It would be a shame if a too-sweeping regulatory framework [of the kind WHO envisages] discouraged research in the future." That said, Demotes believes changes should be made. "I understand the position of the pharmaceutical companies who operate in a capitalist system, after all," he says. "But there has to be some recognition of the fact that drugs and health products generally are not the same as shoes or televisions."

It remains to be seen if the lead taken by WHO, or whether the International Committee of Medical Journals' refusal to publish results of unregistered trials will help to enforce the International Clinical Trials Registry Platform and, in turn, change the way clinical trials are carried out, registered and made public.

According to Freeman, GlaxoSmithKline will be registering all its phase 1 healthy volunteer trials,"in the interests of transparency and openness". So perhaps there is hope that other companies will adhere to the WHO initiative recommendations, in which participation is voluntary.

Korn, from the Association of American Medical Colleges, believes that, broadly speaking, there will be a digging in of heels on the part of pharmaceutical manufacturers.

"If the purpose of early phase clinical trial registration is primarily to deal with safety issues, then it may be that an array of data fields somewhat different from the "minimal data set" would be sufficient to fit the purpose," Korn says. "But if the expert consensus is that the full "minimal data set" should be required for early phase clinical trial registration, then I do think industry will resist strongly."