In this personal tribute, Dr Jim Yong Kim, a close friend and one-time aide of the late Dr LEE Jong-wook, recalls a modest man of few but carefully chosen words who devoted his life to improving the health of the poor. WHO Director-General Lee  known to friends and colleagues as "JW"  died at the age of 61 on 22 May following a brief illness.

The first time I met JW Lee was in Peru in 2000. We were surprised when the newly-appointed Director of WHO's Tuberculosis (TB) Programme turned up at a relatively minor meeting in Peru to discuss DOTS-Plus for multidrug-resistant TB.

We had heard he was a "vaccine specialist" who had recently been working on a WHO telephone system and that he knew nothing about TB. We had very low expectations. During the first day of the conference I sat down for lunch with him and I began speaking to him in Korean which surprised him as many Korean Americans of my generation have lost the ability to speak the language. In speaking with him, I used the proper honorifics and let him know that I would be very honoured to begin a classically Korean student-teacher relationship. He was pleased and let me know in the most subtle way that this is how we would relate to each other. Later on we spoke English together more often than Korean, but I will always cherish the powerful connection we had through language and culture.

At that conference he displayed one of his key strengths: the ability to listen intently and grasp both the political and technical issues in any area of public health. He spent the entire meeting listening quietly to the proceedings with his arms crossed, observing with great intensity people as they spoke. At the end of the meeting, we asked him to speak. It was typical JW Lee. He started with a joke about WHO itself: "Well, I've never been to a WHO meeting that was not called successful at the end, but I would say that this DOTS-Plus meeting was a successful meeting-plus". He then summarized the meeting in a way that showed he understood the issues and would support our efforts. We were relieved to learn that the new TB Director was extremely sharp and had a wry, self-deprecating sense of humour.

Dr Lee and I became very good friends, and not long after our first meeting his wife Reiko started working in a Partners In Health project in Peru. She is still an integral part of the team and has already returned to Peru to continue her work with nongovernmental organization Mujeres Unidas (Women Together) in the shantytown of Carabayllo.

Dr Lee lived through the Korean War (195053) and like so many of his generation, parts of his childhood were very difficult. He was born into an educated family and his father was at one point a high-ranking governmment official. But his father fell out of favour, as so often happens, and died prematurely of a smoking-related illness. At one point, Dr Lee's entire family had to flee Seoul as troops from the north entered the city. They eventually found themselves in a refugee settlement in the southern coastal area of Korea. Dr Lee's first-hand experience of the desperation of poverty, homelessness and war affected him profoundly. I know of few global public health leaders today who have lived through such hardship. Despite his occasional bouts of cynicism in the face of the political absurdities we often faced at WHO, Dr Lee never lost his deep personal empathy for the suffering of the poor.

After he completed his first degree in engineering at Seoul National University, he went on to complete his mandatory military service, and then promptly decided that he wanted to be a medical doctor. This sudden change in career direction was unusual for a Korean but not surprising for Dr Lee given his broad-ranging interests and brilliant, restless mind. Even during his student days, his gaze seemed to be outward. He was always bringing foreigners to his home for a traditional Korean meal with his family, so that he could practice his English. In a country where nationalism is a powerful force, he was an early convert to internationalism.

Dr Lee was a fierce defender of WHO and the United Nations. On 20 July 2003, the day before he took up his post as WHO Director-General, he met all the new directors and assistant directors-general. Among the many points he made to his new staff, he mentioned the hazards of the rumour mill and the need for great care in communication both within and outside WHO. His central message was clear: "You are not representing your governments here; I want your loyalty to be to WHO. It's a great privilege to work for WHO and I want you to be loyal to its mission. I am not asking you to be loyal to me, but to the institution of the Director-General."

Dr Lee's extraordinary reverence for the United Nations and for WHO were not surprising, given his early and unusual commitment to being a citizen of the world. He knew the Organization and the countries as well as anyone could. He travelled to nearly every Member State in his 23 years with WHO. He could tell jokes and poke fun at the institution, but this was a man who was fierce in his loyalty to WHO, the United Nations and the grand but excruciatingly difficult project of multilateralism.

Dr Lee had great instincts when it came to the power and influence that can be wielded by the head of a United Nations institution. In taking on the "3 by 5" target to deliver antiretroviral (ARV) treatment to 3 million in need in developing countries by the end of 2005, he knew that he was taking a great risk, but he also understood the importance of a DG who was willing to take responsibility for failure. When WHO launched the campaign, he would say: "If we fail, then point the finger at me". This was, I came to learn, an extraordinary act of courage.

After serving as his Adviser, I was appointed Director of WHO's HIV Department in 2004 and put in charge of the "3 by 5" campaign. When "3 by 5" was launched in December 2003, it was celebrated by activists and people living with HIV in poor countries, but it was also attacked and vilified by some of the most powerful forces in the world. Nevertheless, Dr Lee stood his ground firmly and in doing so, he fundamentally changed people's attitude to the possibility of treatment for a chronic disease in settings of poverty. In remaining committed to "3 by 5", despite criticisms from important Member States, he played a major role in changing the way we think about what we should strive for in global health. Only a Director-General of the World Health Organization could have done that. By understanding and respecting the power of the office, he changed the face of public health forever.

In just under three years, JW Lee accomplished much. He desperately wanted to strengthen the institution and he thought the way to do that was to strengthen the country offices. He made real changes there by putting more resources and control over them at country level. He tried to improve the capacity of countries to respond to needs of the people. Today the technical capacity on the ground has been improved. WHO now has more than 50 new, high-level professional medical officers in developing countries to assist with HIV-related activities. WHO representatives in countries can spend larger amounts of money without having to check with the regional offices or headquarters. He pushed for all of these changes because he loved WHO. He was an ambitious man to be sure, but his greatest ambitions were for the institution. 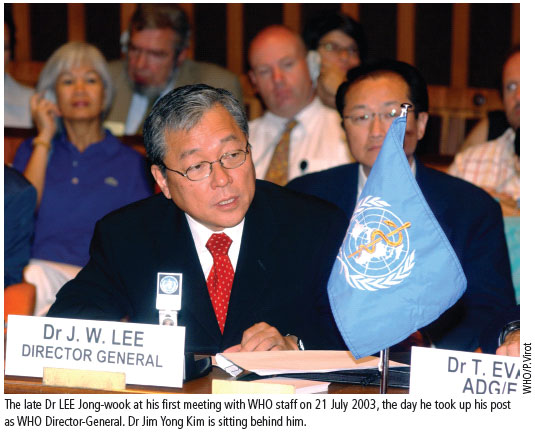 Many saw JW Lee as a rather tough pragmatist without much sentiment. But many of those who were closest to him were the most gentle, caring people. He first met Reiko when she was working in a leprosarium. She had been working there for seven years while preparing to become a Catholic nun. Despite loud objections from all their relatives in Korea and Japan when they fell in love, they got married. Dr Lee used to tell me that his wife: "is the kind of person who can't help but reach out and help everyone around her, she's an angel."

"She's an angel and I'm the devil," he would say. This "devil" who spent most of his adult life trying to provide better health care to poor people was at times perplexed by  but always deeply respectful of  his wife's limitless compassion for all the creatures of the earth. He had a devilish sense of humour, but he was no devil. He was the doctor who worked in a leprosarium, married a Japanese woman for love, who always worked where poor people needed him most and staked his career on an initiative to provide ARV drugs to some of the poorest and most marginalized people in the world. He was, though he would have hated to admit it, an extraordinarily caring person.

He could run with the wolves: the tough, self-serving, ruthless bureaucrats and politicians who often crossed his path. He knew how they thought, often before they knew themselves, and he would run circles around them. But he also heard the angels who never let him forget the pain and suffering of the poor.

As we look forward to the upcoming election for a new Director-General, I can only hope that the Member States will have the wisdom to think carefully about Dr Lee's legacy. WHO deserves a leader who will commit to the institution more than to him- or herself, take courageous action in the face of powerful interests, and hear the angels while fighting the wolves.

Dr Jim Yong Kim is Chief of the Division of Social Medicine and Health Inequalities at Boston's Brigham and Women's Hospital and an associate professor at Harvard Medical School. He was co-founder of the Boston-based advocacy group Partners In Health, which developed pioneering schemes to treat tuberculosis and HIV in resource poor settings. The group provides health services to men, women, and children suffering from treatable diseases in Guatemala, Haiti, Lesotho, Mexico, Peru, the Russian Federation, Rwanda and the United States. In 2003, Jim Yong Kim, won a MacArthur "genius" fellowship for his work with Partners In Health.