WHO will launch a taskforce in late 2006 to fight a thriving multimillion-dollar illegal trade in counterfeit drugs, vaccines and other medical products.

The International Medical Products Anti-Counterfeiting Taskforce (IMPACT) aims to put a stop to the deadly trade in fake drugs, which studies suggest kill thousands of people every year.

"We need to help people become more aware of the growing market in counterfeit medicines and the public health risks associated with this illegal practice," said Dr Howard Zucker, Assistant Director-General for the Health Technology and Pharmaceuticals cluster of departments at WHO.

The taskforce will encourage the public, distributors, pharmacists and hospital staff to inform the authorities about their suspicions regarding the authenticity of a drug or vaccine. In a parallel move, the taskforce will help governments crack down on corruption in the sections of their police forces and customs authorities charged with enforcing laws against drug counterfeiting. Drug manufacturers will be encouraged to make their products more difficult to fake.

The key members of the taskforce will be national drug regulatory authorities and law enforcement agencies. WHO will also seek the involvement of other international organizations, nongovernmental organizations, pharmaceutical manufacturing and wholesaling industry associations, patient advocacy groups and health-care professionals.

The taskforce will meet for the first time in mid-November in Germany."We will decide on concrete projects and deliverables. We will decide who will do what and according to what deadlines," said Dr Valerio Reggi from WHO's Health Technology and Pharmaceuticals cluster of departments, who will coordinate the taskforce.

The idea of setting up this taskforce was approved at a meeting in Rome in February but it is the latest initiative in a long campaign.

For almost 20 years, WHO has been fighting drug counterfeiting since it became a major threat in the 1980s. "The problem was first noticed by the pharmaceutical industry. They saw that their own products were being copied," said Reggi, who has worked on drug regulation at WHO since 1989.

An estimated 1 in 4 packets of medicine sold in street markets in developing countries could be fake.

In mainland southeast Asia, artesunate, a vital antimalarial drug, is commonly faked. An international study conducted by Nick White and his colleagues and published in Tropical Medicine and International Health in 2004 found that 53% of artesunate tablet packs sold in the region did not contain artesunate.

Although it is difficult to obtain precise figures, the Food and Drug Administration in the United States of America estimates that worldwide sales of fake drugs exceed US$ 3.5 billion per year, according to a paper published in the journal PLoS Medicine in April 2005. The Center for Medicines in the Public Interest in the USA predicts that counterfeit drug sales could reach US$ 75 billion globally in 2010 if action is not taken to curb the trade.

Counterfeit drugs are found everywhere, but sub-Saharan Africa is particularly affected. "The dismantling of the health-care system in most African countries has created the vacuum into which counterfeiters have been able to slip," said Reggi.

In Africa, drugs are sold through the informal economy in large open-air markets alongside fruit and vegetables. "People may realize the risk that they take, but there's no other place to buy drugs," he said. "Hospitals can't buy directly from the pharmaceutical companies for many reasons, including cost and the small quantities they need. So they buy drugs from local suppliers who sometimes are not even licensed by the local authorities. Some of these people may be selling fake drugs, either knowingly or unknowingly."

According to WHO, drugs commonly counterfeited include antibiotics, antimalarials, hormones and steroids. Increasingly, anticancer and antiviral drugs are also faked.

Counterfeiters take inert ingredients such as chalk, and even dangerous chemicals, package them convincingly and sell them to consumers. Such drugs may have no therapeutic effect and can be toxic.

In common with illegal narcotics, fake drugs are trafficked across borders, hidden in items such as teddy bears, or labelled as animal feed. Having escaped detection by customs authorities, the drugs are repackaged in the destination country. 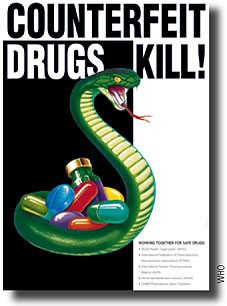 Many studies have documented the impact that counterfeit drugs can have on patients' health, as well as the way they undermine health systems. Reggi cited the case of a counterfeit iron preparation that has killed pregnant women in Argentina in the last two years. Hundreds of children in Bangladesh suffered kidney failure and many died due to a fake paracetamol syrup diluted with diethylene glycol, according to a study published in the BMJ in 1995.

"The taskforce will coordinate all the organizations involved in combating the manufacture and trade of counterfeit medicines," said Reggi.

After assessing current national laws on drug counterfeiting, and advising governments on how they might be tightened, the taskforce will attack the corruption that stops the law from being enforced, said Reggi. "We want to explain to corrupt officers that they should not accept bribes because the fake drugs they let through could end up poisoning their own families," he said. Closer cooperation between police, customs services and health-care providers is also required.

Enforcement officers would like to be able to identify fake drugs on the spot. But sometimes it is impossible to do so without laboratory analysis. "We could make packaging resistant to forgery by using the security devices we find on modern banknotes," said Reggi. Drugs also need to be readily traceable from the point of manufacture to the point of sale.

"We are working with government agencies and manufacturers to create a database of products," Reggi said. "Each packet of medicine will have a unique number that could be tracked with widely available and relatively inexpensive technology. This would make it possible to check whether a medicine is genuine at any point in the distribution pipeline."

Reggi hopes that the taskforce will encourage consumers and health-care providers to report anything suspicious. "We will follow up reports so that people who tell us about suspected counterfeit drug transactions receive feedback and are motivated to report again in the future."

Nigeria has been at the forefront of global efforts to fight counterfeit drugs since Dora Akunyili took over the National Agency for Food and Drug Administration and Control (NAFDAC) in 2001. To crack down on counterfeits, her first move was to stamp out corruption within her own agency as far as possible.

In five years Akunyili, a 52-year-old professor of pharmacology, has attained celebrity status in Nigeria because of her uncompromising stand against corruption. "We have been rebuilding NAFDAC from a moribund government agency to [one that meets] international standards," she told the Bulletin.

Nigeria is ranked as one of the most corrupt countries in the world, according to Transparency International. Before Akunyili took over, staff abused their position to extort money from honest manufacturers at the same time as taking bribes from counterfeiters in return for access to the Nigerian medicines market. Akunyili fired the most corrupt of her officers. To encourage honesty among her remaining 3000 staff and to boost morale, she offered incentives such as training abroad, improved facilities and a better working environment.

Akunyili told the Bulletin: "The level of corruption we had in 2001 cannot in any way be compared to what we have now. It has decreased to almost zero. But it is still a problem. We cannot rule it out completely."

The Nigerian agency is now a key player in reducing the manufacture and distribution of counterfeit medicines in West Africa. It has the support of the Food and Drug Administration and the Environmental and Occupational Health Science Institute at Rutgers University in the United States of America, among other regional and international agencies including WHO.

According to Akunyili, drug counterfeiting was first reported in Nigeria as early as 1968, "So people have been dying in this country from the effect of fake drugs since the early 1970s". In 1995, Nigeria reportedly donated 88 000 doses of meningitis vaccine to its neighbour Niger, but before the authorities realized that these vaccines were fake, about 60 000 people had been "inoculated". Akunyili said that when she took office in 2001, fake drugs were openly circulating in her country.

Her efforts have led to increased public awareness about counterfeit drugs and tougher surveillance at Nigerian customs. She says that the number of fake drugs in circulation in Nigeria has been substantially reduced, although she and everyone else involved in fighting the illegal trade admit how difficult it is to quantify the problem and therefore measure their success. Still, there is plenty of anecdotal evidence that her measures have had an impact: shopkeepers no longer dare to sell counterfeits openly for fear of being reported to the authorities. Criminals behind the trade have left Nigeria and set up business in other countries, she says. Now governments across West Africa are working closely with Nigeria to crack down on the illegal trade.

How did Akunyili do it? In 2001, most Nigerian consumers were oblivious to the danger of counterfeit drugs. "Fake drug dealers used to thrive mainly because of a lack of awareness". The agency broadcast jingles on radio and television to make the public aware of the dangers and to encourage people to report suspicious drugs. It also regularly publishes lists of counterfeit products in the newspapers. Last year, fake drugs worth about two billion naira (US$ 16 million) were voluntarily handed over by counterfeiters or seized after tip-offs from the public.

Akunyili has hit back at the counterfeiters directly too. There is tough surveillance at ports and airports where medicines enter the country. The authorities inspect shops and markets where medicines are sold. As of June 2006, Akunyili said she had secured convictions for 45 counterfeiters with 56 cases pending. The Nigerian authorities recently opened a laboratory in Port Harcourt that analyses medicines for authenticity. Another is being set up in Calabar.

"Fake drugs were not only killing people [but] the drugs were also killing businesses. So millions of lives have been saved. Industries have been revived," she said, referring to the damage counterfeiting does to public trust in companies and their products.

Despite Nigeria's efforts, Akunyili said: "We are not there yet. Even 1% fake drugs is not good enough, because every life is important." Akunyili said she has asked the Nigerian parliament to amend existing legislation to make penalties tougher, so far without success. "The penalty for a fake drug producer or importer ranges from 5000 to 10 000 naira (US$ 40-80), or between three months and five years imprisonment." The other problem is that the law is not always enforced properly: the counterfeiter may avoid jail, and fines can be insignificant compared with the huge profits from the illegal trade.

But Akunyili says that the biggest challenge her agency currently faces is the open-air drug market in the city of Onitsha in south-eastern Nigeria. She believes that the bulk of fake drugs distributed in Nigeria originate there. Police raids have been unsuccessful because market traders attacked law enforcement officers. "Our officers literally had to escape [to avoid] being lynched". But Akunyili is determined. "If they defeat us, they have defeated Nigeria."