A joint initiative between WHO and about 90 scientific publishers has transformed patient care at a university hospital in Kenya, where students and their teachers have Internet access to the latest research findings. The programme is benefiting a whole generation of scientists across the developing world.

Dr Hilary Rono shudders to think what life for him and his colleagues in the medical profession - particularly in developing countries - was like before the Internet. Rono is just about to complete his masters degree in ophthalmology at the University of Nairobi.

The Internet has been key to his studies, especially the Health InterNetwork Access to Research Initiative (HINARI). The WHO programme is a gift to academic institutions in developing countries, providing them with free online access to 3300 scientific journals. This gives researchers like Rono access to the most up-to-date information for research, but also information that can be used to improve clinical management of patients.

HINARI has transformed Rono's ability to check the latest trends in the management of trachoma and other eye diseases: "It's very easy for me to handle cases at the university hospital. … Because of HINARI, my colleagues and I are able to provide the latest medical care for our patients here in Nairobi, instead of having them taken to the developed world for treatment."

The fact that the latest medical research is just a mouse click away is a major boon for practitioners in developing countries. Before HINARI, practitioners used to go to the library to refer to books and journals, most of which were way out of date. Dr Rono's lecturer Dr Stephen Gichuhi recalls that as an undergraduate in the 1990s: "You were considered well read if you had seen a five-year-old copy of the New England Journal of Medicine".

"It is often said that by the time a book rolls out of the press, the information is already outdated. But for those in the medical profession and practising in the developing world we were left with no option but to use such information," said Gichuhi.

Gichuhi has just finished a Masters degree dissertation using HINARI and says many of his colleagues are also benefiting from the programme.

As a leading institution in East and Central Africa, the University of Nairobi receives students from across the African continent, some of whom are from countries with limited access to the online journals that are now needed for effective research and patient care.

However, thanks to HINARI, these students can work successfully at the university and later take the same knowledge back home with them. Gichuhi said students and doctors were able to follow some of the latest trends in medical care, such as evidence-based medicine, thanks to HINARI.

Coupled with this, some students, doctors and lecturers use the programme for general reading as well as planning and doing research. Some of them use HINARI in the office and - those who have Internet access - also from home. Since HINARI is relatively new, however, it is too early to say whether it is helping people publish papers more easily.

"It normally takes between six to eight months to publish and we were introduced to this programme only last year," Gichuhi said, adding that the people who use HINARI are overwhelmed by the choice and range of journals to which they can submit work.

Before HINARI, most of them only targeted well-established journals that were unlikely to publish articles from developing countries.

With the expansion of the choice of journals available to students and staff at the university's department of ophthalmology, usage has increased - a situation that has been helped by continuous in-house promotion by the university authorities.

Gichuhi and Rono agreed that HINARI could be improved. Gichuhi said that the archiving of information online does not always include some diseases that are still a major problem in the developing world.

About an hour's flight from Nairobi, in the coastal town of Kilifi, HINARI has made a quieter but no less significant impact. Established in 1989, a joint programme between the Kenya Medical Research Institute and the Wellcome Trust, the Kilifi unit is a research leader in Africa.

"We're quite a different beast to most [institutions that] use HINARI in Africa in that we're very well resourced," said Dr Greg Fegan, the unit statistician.

Even before HINARI, the Kilifi library subscribed to 34 scientific journals in print and 11 others online. Fegan said that 80 scientific staff and students use the system regularly and that HINARI is one of their 10 most-visited websites. At Kilifi, they have over 100 computers on their network and about six networked laser printers.

Before HINARI, the system for obtaining articles in scientific journals at the institute was cumbersome and slow, according to librarian Alex Maina Mwangi. 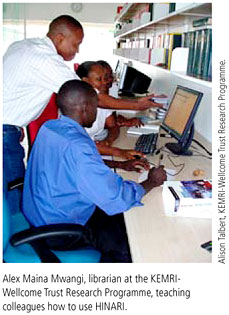 But while access is no longer an issue with HINARI, institutions like the University of Nairobi and the Kilifi research centre are facing mounting costs for high-quality print-outs of articles containing vital information in colour-coded figures and micrographs.

Free access to journals is key to development goals

In a major coup for access to information in developing countries, publishers have renewed their commitment to a WHO programme that provides free access to more than 3300 scientific and medical journals.

The decision by a group of about 90 publishers in July was intended to help developing countries move closer to achieving the Millennium Development Goals (MDGs).

The publishers initially agreed in 2001 to provide free access for two years, then extended the deal for a further three until this year. Now the scheme will run until at least 2015, the target date for the MDGs.

The move addresses a pressing need in developing countries for better access to up-to-date scientific evidence so that governments can make informed decisions on health policy that, in turn, can lead to an improvement in people's lives.

Under the WHO programme, known as the Health InterNetwork Access to Research Initiative, or HINARI, institutions in 69 countries with a gross national product (GNP) per capita of less than US$ 1000, as determined by the World Bank in 2001, are eligible to receive free full-text access to more than 3300 biomedical and clinical journals.

Institutions in a further 44 countries with a GNP per capita of US$ 1000-3000 can also access the scheme, but pay only US$ 1000 per year. This revenue is used for training in eligible countries.

"Getting connected to HINARI is easy. All users need is a computer linked to the Internet and a username and password, which their library can supply," said Barbara Aronson, Programme Manager for HINARI. "Everyone at eligible institutions can use the system, including students."

While other free-access journal schemes exist, HINARI is unique in its breadth of coverage. Included are English-language titles such as Nature, Science and the Lancet as well as journals published in French, Portuguese, Spanish and other languages.

Although primarily aimed at researchers at universities and public health institutes, HINARI is available in government offices as well as hospitals and nursing schools.

WHO set up HINARI after researchers from developing countries attending a WHO workshop in Annecy, France, in 2000 said that they did not have adequate access to many key journals because the subscriptions were too expensive.

"The number one priority for them was 'get us access to the priced journals'," Aronson said, referring to the international journals with high subscription charges, particularly for institutions in developing countries.

"So we went to a few publishers and said 'could we have free access to your journals for 10 institutions per year' to test out whether this works".

The BMJ lent the project a staff member, Maurice Long, who knew many of the key science, technology and medical publishers well. Long organized the first meeting with six of the biggest journal publishers in New York City in 2000, and has been liaising with the publishers ever since.

"We just said 'look, this is the situation of the poor countries of the world'. And the publishers said 'OK, that group should get the journals for free'. They were immediately receptive to the idea". Currently, Aronson estimates that the market price for the entire package would be US$ 2.4 million per institution.

With the help of Yale University in the United States of America, WHO set up the authentication server that routes download requests to the publisher's own servers, which hold the articles. The system went live in January 2002 and usage has grown since.

"By our best estimate there were one million articles downloaded in 2003. In 2005, it was 3.5 million. By the end of this year we could get as high as five million," Aronson said.

Connectivity is the hitch that stops more people from taking advantage of the scheme. Users in developing countries often don't have computers, fast Internet connections and the dependable electricity supplies that are needed to download articles.

Even if users can access HINARI, technical problems are common. Aronson blames these on the rocketing demand for bandwidth and related technology issues. The system is complex too, with about 90 publishers and 2100 registered institutions worldwide all trying to connect to one another. This can cause blackouts.

WHO and its publishing partners are improving the reliability of the service. Aronson said that HINARI is "working to replace our much overloaded authentication server with a better one". Recently, there was some incompatibility between HINARI and one of the big publisher's web sites. "We got the publisher's entire technology team to stop what they were doing and work with us to solve the problem." http://www.who.int/hinari/en/