WHO response to the humanitarian crisis in Lebanon

WHO, other UN agencies, 45 local and international partners and the Lebanese Red Cross have been supporting Lebanese authorities in meeting the health needs of people caught in the conflict across the border between Lebanon and Israel.

The crisis, which affects the lives of one million people in Lebanon, Israel and surrounding countries, forced large numbers of people to flee their homes.

WHO's main task has been to coordinate the relief effort in all areas related to health care. The organization also filled unmet gaps - for example, by providing essential medicines, in particular for the chronically ill, and monitoring the quality of drinking-water.

WHO set up an effective reporting system for disease outbreaks in 60 public buildings in Beirut where people sought refuge. The aim was to detect any outbreak of disease and contain it at an early stage.

WHO, in collaboration with UNICEF, the Lebanese Ministry of Health and other agencies participated in two measles and polio immunization campaigns in greater Beirut, targeting children displaced by the fighting. About 10 000 children were vaccinated in five days at the height of the crisis.

When the conflict was at a peak in late July and early August, access to southern Lebanon was severely hampered - due to security concerns and badly damaged roads and bridges - making it extremely difficult for UN agencies to deliver humanitarian relief supplies. 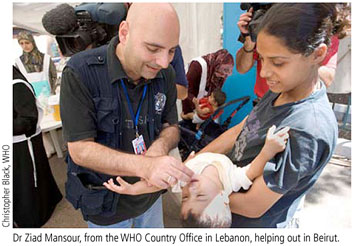 Nevertheless, WHO was able to send supplies which met the needs of Lebanese health care workers, including 20 Emergency Health Kits to hospitals. One kit meets the basic health needs of 10 000 people for three months.

Hospitals and other health facilities were also dangerously close to running out of fuel. Fuel is essential to keep the back-up generators running that supply electricity to hospital operating theatres, incubators for newborn babies and refrigerators containing vaccines and drugs. WHO warned that more than half the hospitals would close without fuel delivery.

However, with the cessation of hostilities on 14 August, freedom of movement over the whole of Lebanon was restored. "We are glad access is now allowed. We can move experts and supplies more easily to many places, especially in the southern part of the country," said Dr Ala Alwan, WHO Representative of the Director-General for Health Action in Crises.

In mid-August, WHO sent 67 tonnes of fuel to southern Lebanon, enough to meet the needs of 18 hospitals for 10 days. The ceasefire also allowed WHO to visit dozens of hospitals and health centres to assess the damage and the needs for early recovery.