Ten years ago Rwanda had one of the worst road-safety records in the world. But once the government recognized that making roads safer could help with the rehabilitation of a nation traumatized by the 1994 genocide, its efforts have won international acclaim.

Christmas 2006 was a special event in Rwanda. Just a decade after being ranked as one of the worst countries for road safety, Rwandas police force watched over the countrys first accident-free festive season, a time for reckless driving in many countries.

This transformation has been far from easy to achieve, however. A World Bank situation report, commissioned in 1996, concluded that one accident was taking place every two and a half hours on Rwandas roads, almost all of which left people injured and 10% of which resulted in deaths.

Urban centres, such as the capital Kigali, saw frequent violent collisions, sometimes because drivers refused to respect others right of way, according to Dominique Rurangirwa, who works on transport and road safety in Rwandas Ministry of Infrastructure. Night-times were particularly hazardous "because of the excess speed resulting generally from alcohol consumption," he recalled. In rural areas, where roads are in a far worse condition than those in urban centres, drivers regularly went too fast to maintain control on the uneven carriageway surface.

Rurangirwa said the number of road deaths in Rwanda for a country of some nine million people was found by the World Bank to be among the worlds highest in 1996.

But, according to Rurangirwa, the severity of the situation also presented an opportunity. "After the genocide which plunged Rwanda into mourning in 1994, the country knew that one method of rehabilitation was [improving] its road infrastructure, which was damaged during the genocide, leading to many road traffic deaths," he explained.

The 1996 World Bank report echoed this view that Rwandas incentive for improving road safety was about moving the country forward from responding to a humanitarian crisis after the genocide to efforts focused on development, of which improving infrastructure and road safety were key parts. The desire for post-genocide rehabilitation and development were the major factors behind the big push on road safety.

After reviewing the World Bank situation report, the Rwandan government started a new road-safety programme, financed by the World Bank, and embarked on a complete revision of the countrys laws on road conduct. Ministers re-examined the regulations governing the traffic police and the requirements for drivers, consulting widely among transport stakeholders, including unions and regular road users. "We also spoke to pedestrians, in particular the schoolboys and students, to make sure that we consulted at the level of communities," said Rurangirwa.

New regulations, which started to be strictly enforced after 2001, included mandatory wearing of seatbelts, speed limits, vehicle inspections to ensure standards of roadworthiness and limits on blood-alcohol concentrations. These legislative changes were followed up in 2003 by a public awareness campaign and a law introducing further penalties for lack of seatbelt use or failure to wear helmets on motorcycles. 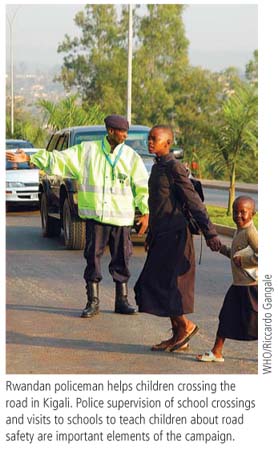 Since 2004, the World Health Organization (WHO) has been working with the Rwandan government to help raise community awareness of road safety, according to WHO Country Health Information Officer Jean Busco Gasherebuka. He said that WHO has negotiated with schools and unions through a campaign organized by the ministries of health and infrastructure, the police force and WHO. "We have held conferences in the secondary schools through the country and distributed material on the road safety," he said.

The types of accidents also changed. Before the new law came into force, excessive speed resulted in high rates of pedestrian injuries and deaths. But speed limits and penalties for drunk-driving reduced these incidents. "The installation also of pavements and crossings for pedestrians also contributed to the reduction in these types of accidents," Rurangirwa added.

Enforcement of these substantial changes was a challenge for Rwandas under-resourced police force. Early success was accompanied by fears that corruption would increase among traffic police, with individuals attempting to bribe their way out of paying harsh fines (the fine for not wearing a seatbelt is equivalent to 20% of a civil servants monthly salary). Combating these rumours, the government instigated a parallel crackdown on police corruption in 2004, in which more than 100 officers were sacked for taking bribes.

Six years on from the tightening of regulations, most Rwandan citizens are used to the new rules. Now, Rwandas traffic police, whose ranks have swelled to between 450 and 500 officers, is turning its attention to foreign coach companies, which are frequently involved in crashes in Rwanda. Coach drivers ferrying passengers to Kigali from Kenya and Uganda object to Rwandas recently introduced national speed limits of 60 kilometres an hour, which is 20 kilometres an hour lower than in neighbouring east African countries.

Countries in WHOs African Region have 40% more road deaths per 100 000 population than other low- and middle-income countries and 50% more than the world average. The worst rates of road traffic deaths in the WHO Region are among the under-25s, according to WHOs Youth and road safety report.

Rwandas plans for extending its success in road safety include further reinforcements for the traffic police to better enforce the law, as well as more public education about how to prevent accidents and observe good road conduct. Gasherebuka believes Rwandas continued commitment to road safety  exemplified by its signing of the Accra declaration on road safety in Africa in February  shows its determination to further reduce road casualties and deaths.