The release of genetically modified (GM) mosquitoes into the environment to fight dengue fever is about to open a new front in the war against vector-borne diseases. Sarah Cumberland reports.

Dengue fever is a disease that afflicts an estimated 100 million people per year. There is no vaccine and no cure. The mosquito-borne viral infection causes severe flu-like illness, often requiring hospitalization, and can develop into the potentially fatal dengue haemorrhagic fever.

Experts agree that the only successful way to control or prevent this disease is to combat its vector. But this task is extremely difficult as the Aedes mosquito genus thrives in urban settings and bites during the day. Its eggs can lie dormant in dried-up water receptacles, such as in car tyres, which are often shipped around the world.

Fortunately a new front is forming in the battle against this tenacious mosquito as years of scientific work come to fruition. In the next year or two, if biosafety, regulatory and ethical approvals and community consent are obtained, a new kind of mosquito could be released into the environment.

Created in the laboratories of Oxford University and Oxitec, a biotechnology company located in the south of England, these male mosquitoes of the Aedes aegypti species will be on a mission to mate, but not to breed.

They are in fact designed to cause the wild females with whom they mate to produce offspring that die at the pupa stage with the aim of significantly reducing the native population below the numbers required to sustain dengue fever transmission.

Insect population suppression - employing what is known as sterile insect technique - has actually been used to control agricultural pests for more than 50 years by releasing laboratory-reared insects made sterile through irradiation. Native females that mate with the sterile males produce non-viable offspring, leading to a decline in the natural population. The governments of Guatemala, Mexico and the United States of America (USA) irradiate some two billion male Mediterranean fruit flies every week, before releasing them into the wild to mate. Another agricultural pest, the parasitic screwworm, has in this way been eradicated from the USA and much of Central America.

But this technique has not been successfully used against mosquitoes because sterilizing doses of radiation weaken them, reducing their ability to compete for mates, which is fundamental to the method - until now. Luke Alphey, founder and research director of Oxitec, working with colleagues at Oxford University discovered that, by inserting a single gene into the A aegypti's DNA, it was possible to produce males whose offspring do not survive to adulthood.

Oxitec's findings have now been successfully corroborated through the world's first semi-field trials held in collaboration with the Institute for Medical Research (IMR) in Malaysia. These trials were held in a confined field house that mimicked the natural environment and aimed to test the GM male's mating competitiveness with unmodified insects.

Malaysia, which has almost 50 000 reported cases of dengue fever per year, has also taken a lead in risk assessment of GM mosquitoes. The Academy of Science in Malaysia has conducted an independent review of these semi-field trials and has recommended that the project proceed to the next step once it has passed regulatory and ethical clearances. In December 2008, international experts took part in a meeting convened by the United Nations Development Programme (UNDP) at IMR to discuss risk assessment with Malaysian and regional scientists and regulators. 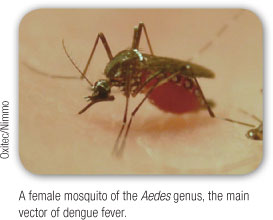 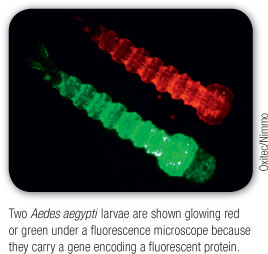 The next stage will be to conduct open-release trials in which the mosquitoes are released into selected, naturally contained sites such as islands. According to Dr Yeya Touré, manager of innovative vector control interventions at the UNDP/World Bank/World Health Organization (WHO) Special Programme for Research and Training in Tropical Diseases (TDR), these trials may be just "a matter of months away".

"We are no longer talking about wild speculation," says Alphey. "If the funds are made available, I can see the elimination of dengue from regions or groups of countries using GM technology integrated with other tools." Good news for the 2.5 billion people currently at risk of the disease.

Since 1970, there has been a surge in dengue fever epidemics with more than 100 countries worldwide now seriously affected. Increased shipping of goods and urbanization have been blamed for the introduction and spread of the Aedes mosquito into the Americas and south-eastern Asia.

According to a study conducted by the Indian Institute of Management in Ahmedabad, Aedes mosquito-borne disease - primarily dengue fever and chikungunya, another viral disease, - costs India alone a hefty US$ 1.3 billion every year, 95% of that due to illness.

But it's not only the Aedes mosquito and dengue control that are under the microscope. According to Paul Eggleston at Keele University in England, who has been working on developing GM mosquitoes since 1983, it is now possible to genetically modify all major taxonomic groups of mosquito, including those of the Anopheles genus, which is the vector of malaria, and those of the Culex genus, the vector of lymphatic filariasis, which can lead to elephantiasis. The potential for a concerted pushback against mosquito-borne diseases is enormous.

It is important to make the distinction between population suppression using a sterile insect technique - Oxitec's approach - and another approach, known as population replacement, which is under development. This more technically challenging strategy modifies the insect so that it can no longer transmit the parasite that causes dengue. It relies on GM insects mating with and permanently altering the genetic make-up of the wild population.

While prototypes of some of the necessary components have performed well in laboratory settings, population replacement is several years away from field trial. "There are no plans to release insects into the wild yet," says Eggleston. "As scientists, we are aware of the need to take a cautious approach. We want to be as sure as we can possibly be that the health benefit is unambiguous."

TDR's Touré concurs: "These [GM] mosquitoes have to replace the wild population," he says. "We have to be sure that they are not going to introduce any other issues through their genetic modification."

Oxitec's Alphey is hopeful that his non-propagating, non-biting (because they are males) GM mosquitoes will be given the "thumbs-up", but he is well aware of the importance of winning over the sceptics if GM-based sterilization is to become a significant public health tool. "We have to provide the necessary information to allow the scientists and technical advisers to governments in affected countries to decide whether this is right for their country and circumstances," he says.

Those local scientists should also be involved in the development of the technology so that they can help their governments to make informed decisions and weigh up the potential benefits and risks. Scientists will also be needed to implement the strategies, to work in laboratories that will rear and distribute the GM mosquitoes in their local settings.

In recognition of WHO's role in providing guidance, a technical consultation will be held in May in Geneva to assess the current status and discuss future plans for developing GM mosquitoes as a control tool. Co-organized with the Foundation for the National Institutes of Health, the consultation will bring together experts in global biotechnology, safety and GM research, as well as regulatory and policy officials from WHO Member States. "The meeting will cover issues such as biosafety assessment, regulatory, ethics and the social aspects of research," explains Touré. The technical consultation will be followed by a broader public consultation that will be attended by nongovernmental organizations and advocacy groups, as well as media representatives. 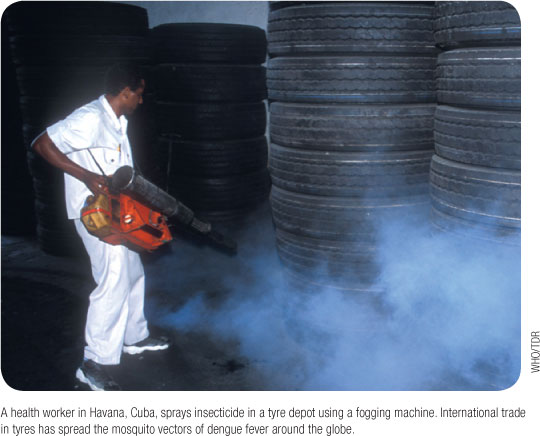 Despite all the buzz about GM mosquitoes, few believe they represent a silver bullet against mosquito-borne diseases. Alphey himself sees GM as part of an overall disease management system, a view echoed by Anthony James, who is working on population replacement at the University of California: "If any one of these GM techniques works, we don't expect it will provide the solution alone," he says. "We are going to have to develop a very strong integration of the components of [mosquito-borne disease] eradication: vector control, vaccines and drugs," he says.

And as Eggleston points out: "The problem isn't going to go away. Global warming is having a real impact, with the encroachment of mosquito-borne diseases on new territory, including southern Europe."