The impact of pictures on the effectiveness of tobacco warnings

Cigarette packages in most countries carry a health warning; however, the position, size and general strength of these warnings vary considerably across jurisdictions.1 Article 11 of the WHO Framework Convention on Tobacco Control (FCTC) and the Article 11 Guidelines adopted at the Third Conference of the Parties in November 2008 have put the spotlight on the inclusion of pictures on tobacco package health warnings. Beginning with Canada in 2001, 28 countries have introduced pictorial warnings and many other countries are in the process of drafting regulations for pictorial warnings (Box 1 and Box 2). This paper presents a brief review of the research studies that support pictorial warnings, reviewed in greater depth by Hammond1 and by the International Tobacco Control (ITC) Policy Evaluation Project.2

Theories in social and health psychology, supported by empirical studies, have demonstrated the superiority of using pictures and imagery over text-only messages in health communication.1 Since the 1950s, many research studies have demonstrated that "fear appeals" are effective in motivating health behaviour change (e.g. quitting), especially if paired with information about how to avoid the fearful consequences (e.g. where to find help about quitting).1

Evidence for the greater potential impact of pictorial warnings have come from focus groups and interview studies, experimental exposure studies1 and population-based surveys among Canadian smokers,3-5 Australian youth,1 Dutch smokers1 and from several countries of the 20-country ITC Project: prospective cohort surveys of adult smokers in Australia, Canada and the United States of America (USA),3,5-8 smokers in New Zealand,9 smokers in Canada and Mexico,10 smokers11 and youth12 in Malaysia and Thailand. In addition to the ITC surveys, there are other research studies that support the use of pictorial warnings, notably in the European Union. Taken as a whole, the research on pictorial warnings show that they are: (i) more likely to be noticed than text-only warning labels;3,4,6-8,10-12 (ii) more effective for educating smokers about the health risks of smoking and for increasing smokers' thoughts about the health risks;7,10 and (iii) associated with increased motivation to quit smoking.3,6-9

A recent analysis of data from the ITC Four Country Survey compared the impact of the introduction of pictorial warnings in Australia in 2005 to that of the introduction of larger text-only warnings in the United Kingdom in 2003. Cognitive and behavioural indicators of label impact that are predictive of quit intentions and quit attempts (e.g. forgoing cigarettes because of the labels; thinking about the health risks of smoking) increased to a greater extent among smokers after the Australian pictorial warnings were introduced than they did in the United Kingdom after enhanced text-only warnings were introduced.6 Pictorial warnings are also cited by former smokers as an important factor in their attempt to quit and have been associated with increases in the use of effective cessation services, such as toll-free telephone "helplines".9 Although all warnings are subject to wear-out over time, pictorial warnings have also been shown to sustain their effects longer than text-only warning labels.7,8

Pictorial warnings may be particularly important in communicating health information to populations with lower literacy rates.1,2 This is particularly important considering that, in most countries, smokers report lower levels of education than the rest of the population. Preliminary evidence also suggests that countries with pictorial warnings demonstrate fewer disparities in health knowledge across educational levels.13 It should be noted that particular care should be taken in the selection of pictures for use in low literacy populations: without supporting text, pictures of smoking could inadvertently suggest approval rather than warning of its harms. Although pictures may say a thousand words, it is critical to select those that say the correct thousand words.

Evidence from low- and middle-income countries also supports the effectiveness of large pictorial warnings over text-only warnings, and even suggests that pictorial warnings may be even more effective in these countries because warning labels represent one of the few sources of information about the health risks of smoking (in some countries, warnings are the only systematic source of such information).2,14 In 2006, Thailand implemented new warning labels that included graphic pictures at the top 50% of the package. After implementation of these new warnings, the percentage of Thai smokers stating that the labels made them think about the health risks increased and as did the percentage of those saying the labels made them more likely to quit. A survey that was conducted in Malaysia - where the text-only warning labels did not change - showed no such increases.2,14 These findings have also been replicated among nationally representative samples of youth in Malaysia and Thailand.12 An ITC experimental study among Chinese smokers, non-smokers and youth in four cities provides strong support for the use of pictorial warnings. Pictorial warnings were rated by all groups as being more effective than text-only warning labels for motivating smokers to quit, convincing youth not to start and informing the public of the dangers of smoking.2,11

The tobacco industry has suggested that the use of large pictures may reduce the effectiveness of health warnings and could actually lead to increases in smoking behaviour. This is captured in a quotation from the former chief executive officer of British American Tobacco: "The growing use of graphic image health warnings ... can offend and harass consumers - yet in fact give them no more information than print warnings."1 However, there is no evidence that pictorial warnings lead to boomerang effects. An analysis of data from the ITC Four Country Survey found that the Australian pictorial warnings, introduced in 2005, led to greater avoidant behaviours (e.g. covering up the pack, keeping it out of sight, or avoiding particular labels), compared to Canada, the United Kingdom, and the USA. Importantly, those smokers who engaged in avoidant behaviours were no less likely to intend to quit or to attempt to quit,8 replicating the findings of a study of the Canadian warnings.5 Thus, although pictorial warnings can lead to avoidance and defensive reactions, such reactions are actually indicators of positive impact.

Several countries are exploring methods to enhance the effectiveness of pictorial warnings, including warnings that are directly informed by research on the neuropsychology of emotion to maximize negative emotional arousal (Brazil), testimonial warnings that depict real people (Chile), strategies to make cessation and supportive information more engaging (e.g. through the inclusion of a "quitline" telephone number, as in New Zealand)9 and the addition of a mass media campaign that synergistically uses themes and images from the set of pictorial warnings to build strength across different tobacco control efforts (Australia).

Substantial evidence from a broad range of studies supports the inclusion of graphic pictorial images on tobacco warning labels, as called for under the strong Article 11 Guidelines (Fig. 1). Graphic pictures can significantly enhance the effectiveness of warning labels. In many countries, the warning label is the only sustained population-level mechanism by which governments inform their people about the harms of cigarettes and other tobacco products and, in those countries, the evidence-based inclusion of pictures could potentially lead to greater impact. For decades, the tobacco industry has taken advantage of the package as a venue for creating positive associations for their product.1 The use of graphic pictures is an important means of replacing those positive associations with negative associations, which is far more appropriate given the devastating impact of tobacco products on global health. 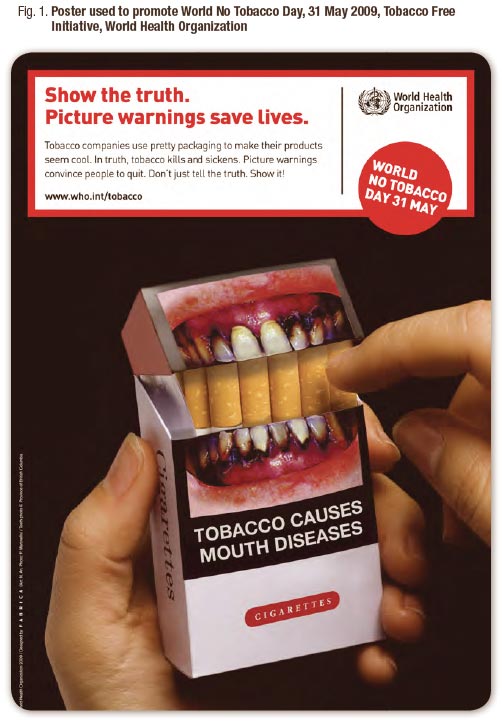 Geoffrey T Fong is also affiliated with the Ontario Institute for Cancer Research, Toronto, ON, Canada.

11. Fong, GT. What we know and don't (yet) know about the impact of tobacco control policies: an in-progress summary from the ITC Project. In: Invited public health and epidemiology plenary lecture, Society for Research on Nicotine and Tobacco, Dublin, Ireland, April 2009.