IN THIS MONTH'S BULLETIN

In the first editorial, Samantha Watson et al. (558) argue that health systems need to be better prepared for disasters. In the second, Atle Fretheim et al. (559) call for more evidence on the effects of performance-based financing. Gary Humphreys (562563) reports on moves to identify and commercialize the active ingredients in traditional Chinese medicines and Jane Parry (564565) reports on the expansion of genetic testing services in low- and middle-income countries. Ben Jones interviews Marion Nestle (566567) on the changes in the food market that have contributed to an obesity epidemic. 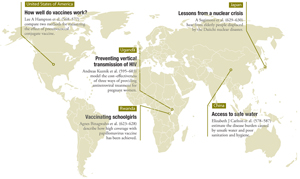 How to market condoms?