Low- and middle-income countries are catching up on the use of screening for birth defects. Jane Parry reports.

The application of genomic research to public health services in the last decades has led to more accurate and faster diagnostic tests, the development of new drugs and to the early detection of genetic disorders.

But while wealthier countries have long been able to screen for the more common congenital disorders, low- and middle-income countries have been slower on the uptake. Lack of resources, lack of data on the true magnitude of the problem and lack of trained health professionals are only parts of the reason for this slow uptake.

Congenital disorders can be perceived as less important than other public health problems. In some countries, fears of stigma and legal or religious restrictions on abortion are barriers to screening programmes.

"In poorer countries, neonatal and infant mortality is mostly due to infectious diseases, and lack of antenatal care, so genetic diseases are not perceived as having enough importance for governments to allocate resources to establish genetic services," says Professor Lavinia Schüler-Faccini of the Genetics Department of Universidade Federal do Rio Grande do Sul in Porto Alegre, in Brazil.

"Genetics is largely perceived as extremely expensive and accessible to a minority of people. However, in poorer countries, the population also tends to have lower health education, and this frequently increases pregnancy risks." 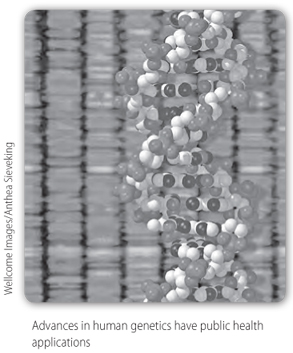 The situation is now changing. The approval of a resolution on the prevention and care of birth defects by the World Health Assembly in May 2010 and publication in 2011 of the first global report on community genetic services in low- and middle-income countries by World Health Organization (WHO) mean that genetic services could become more widely accessible. 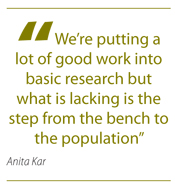 Community genetic services aim to prevent congenital disorders and genetic diseases and to provide diagnoses and counselling in the community for affected families. The WHO report highlighted some countries that have adopted prevention programmes for congenital disorders, such as Bahrain, Cyprus and the Islamic Republic of Iran, but found that congenital disorders  more commonly known as birth defects  constituted a "major health problem worldwide" and that there were not enough services in low- and middle-income countries to prevent and manage these conditions.

Birth defects are defined by WHO as "structural or functional abnormalities that are present from birth, whether recognized at birth or later". Some low- and middle-income countries  particularly in Africa, eastern Mediterranean and south-eastern Asia  combine limited prevention and care with high prevalence of particular congenital disorders, such as haemoglobinopathies; disorders that affect the way blood carries oxygen.

Consanguinity  marriage between people who are related to each other  can increase inherited diseases, as can advanced maternal age at conception, which increases chromosomal trisomies such as Down syndrome.

Screening and prevention programmes for genetic disorders can have other public health benefits through "simple and wide-ranging interventions such as folic acid supplementation; immunization, screening and control of diabetes and obesity; and prevention of smoking initiation," according to Dr Lorenzo Botto, professor of Paediatrics at the University of Utah School of Medicine in the United States of America and chair of the executive committee of the International Clearinghouse for Birth Defects Surveillance and Research (ICBDSR).

Such measures can often be implemented within existing maternal and child programmes, and in time the same mechanisms should be used to give parents access to genetic counselling on an equitable basis, according to Dr Anita Kar, director of the Interdisciplinary School of Health Sciences at the University of Pune, India.

"We're putting a lot of good work into basic research but what is lacking is the step from the bench to the population," she says. "Genetic counselling also has to be developed through local research because of the unique cultural and social context. We have to start an education programme where people are made aware of genetics as a science that is crucial for people's well-being."

"The resolution and report have been very successful in raising the profile and galvanizing action [to make these services available] across the world," says Hilary Burton, director of the Foundation for Genomics and Population Health (PHG Foundation), an independent charity that seeks to make the benefits of science and genomics available in all countries. The foundation runs Born Healthy, a programme to help low- and middle-income countries develop genetics and other services to prevent birth defects. Born Healthy includes a toolkit that health professionals and policy-makers can use to determine the burden of congenital diseases based on the best available international epidemiological data and to formulate strategies for prevention, treatment and care.

"Birth defects are one of the main areas where genetics is of interest to developing countries and they need to have in place good basic preconception and prenatal care," says Burton. "How to build a programme of prevention of birth defects, part of which is genetics, is something that public health genomics experience can really help with."

PHG Foundation's Toolkit for Health Needs Assessment in Congenital Disorders was used in Brazil by Schüler-Faccini to demonstrate that genetic services are cost-effective. "[It showed] that the cost of setting up genetic services and prevention of birth defect programmes can represent less of an economic burden than doing nothing, since the burden of congenital anomalies is much higher when not properly treated and prevented," says Schüler-Faccini. 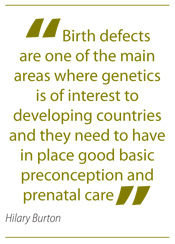 In Brazil, neonatal screening has existed for more than 15 years, comprising tests for phenylketonuria, congenital hypothyroidism, sickle cell disease, and, in some parts of the country, cystic fibrosis. This screening is paid for under the Sistema Único de Saúde (SUS), or Unified Health System, as is treatment when disease is detected. There are referral hospitals and genetic centres where patients are referred for diagnosis as well as for treatment, if necessary, explains Schüler-Faccini. 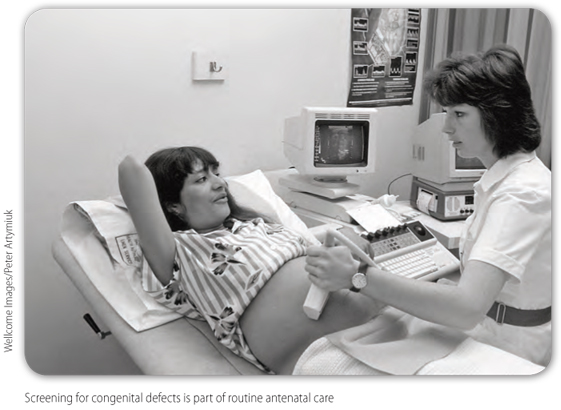 However, access to prenatal screening is more limited, and Brazil's situation highlights some of the contentious issues that can arise due to a country's specific legal and religious context, as well as the structure of its health system. Ultrasound services are available under the SUS in university and tertiary hospitals. In addition, a quarter of the population has supplementary private health care, making prenatal ultrasound at 1820 weeks accessible for most pregnant women.

As for genetic antenatal testing, first trimester screening  such as serum α-fetoprotein and nuchal translucency, which can be used to detect Down syndrome in the fetus  are only available in university hospitals and therefore accessible to less than 1% of the population. "For women with supplementary private health plans, screening is available only in more developed cities, while prenatal chromosomal or genetic diagnosis is only accessible in specialized hospitals," says Schüler-Faccini.

Whereas in some countries abortion would be one option open to a pregnant woman undergoing prenatal screening, in Brazil abortion is illegal. Even if the option to terminate the pregnancy is not available, prenatal screening is invaluable. "Firstly, we know that in more than 90% of cases, we will reassure the mother. Secondly, advance knowledge that a child has a chromosomal disorder or a birth defect is an opportunity to prepare a suitable birth. For example, if the child has a heart defect, it is important to select an adequate hospital. From the psychological aspect, it gives the family time to prepare for the situation."

In Volume 90, Number 8, August 2012, on pages 564 and 565 the abbreviation for the Foundation for Genomics and Population Health should have been "PHG Foundation".