Counting the cost of calories

Obesity is a significant public health issue. Marion Nestle spoke with Ben Jones about calories and why anti-obesity measures must prevail.

Q: How do you account for the rise in obesity? The reasons for it may be obvious, but what would you put it down to?

So you have to ask the question: why are people eating more? In the United States, eating more can be attributed to changes in agricultural policies in the 1970s that paid farmers to grow more food. The result was an increase in calories in the food supply. The second big change was in the way investments worked. Wall Street, which had formerly valued blue-chip stocks that gave long, slow returns on investment, suddenly began demanding higher and faster yields.

These changes put extraordinary pressure on food companies. They had to do two things at once: sell products in an environment in which there was already twice as much food available as anybody could eat, and grow their profits every 90 days. Food companies had to find new ways to sell food. They did that by increasing the size of food portions; promoting consumption of foods eaten outside the home, either in restaurants or other places; and by creating an environment in which it became socially acceptable to eat food at any time of day and anywhere  in cars, in your hand, on the street  places where eating had never been acceptable. Suddenly snacking became okay, food was sold absolutely everywhere, in drug and clothing stores that never used to sell food. There's plenty of research that shows that larger portions, frequent eating and having food available everywhere encourages overeating. So, it worked.

Q: How do you balance the need to inform people about their health, the dangers of obesity and diet-related disorders, with their basic choice as to what they want to eat? 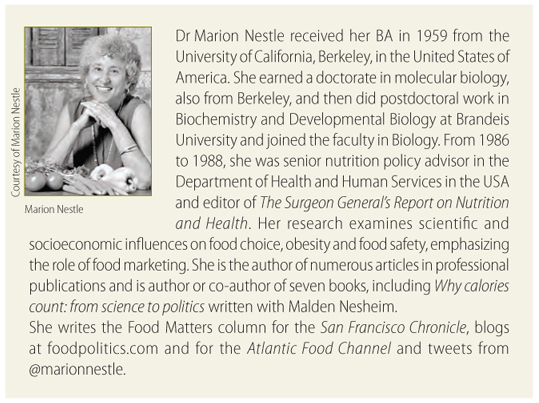 Q: But it's harder in the case of food, is it not, because people will always say that they want a choice as to what they can put into their own bodies?

A: That is the same argument that was given for cigarettes, for fluoridated water, for chlorinated water and for other highly effective public health measures. Some people may feel that their individual rights are being taken away. Public health always has to balance the rights of individuals against the benefits to society. If individual cases of obesity and, for example, type 2 diabetes were simply a personal matter, then society would have nothing to say. But obesity is also a societal matter because at some point type 2 diabetes has to be treated. Hardly anyone can afford the cost of lifelong treatment, so society has ethical interests in keeping citizens healthy.

Q: Are the arguments against controlling obesity rates as much economic as they are health-orientated?

A: Well, they are both. The economic argument is one that that policy-makers understand. But from a public health standpoint, you want your population to be healthy because it's better for individuals, it's better for families, and it's better for society as a whole.

It's ironic that in the USA, the military has become one of the greatest forces for anti-obesity measures because it can't get enough volunteers who are at a reasonable bodyweight and healthy enough to fight. Obesity has become an enormous problem for the military.

Q: Are they taking measures against obesity, then?

A: They are taking more action than any other institution in American society because they are confronted with volunteers who are too overweight to meet their standards, or who gain so much weight that they develop type 2 diabetes or other problems that have to be treated. They are asking their suppliers to produce foods that are healthier, and are looking for ways to limit calories or provide incentives for losing weight.

Q: Do you think that governments need to take more of a lead against obesity?

A: Absolutely, because the food companies aren't going to do that by themselves. Eating less is very bad for business. Even if food companies wanted to help people eat less, they couldn't. They are not public health agencies. Their priority is to shareholders and to increase their profits every 90 days. Healthier food is more expensive to produce. It's up to governments to set some limits that will apply to food companies across the board. The playing field needs to be level, and only government can make it level.

Q: Surely food companies have some level of responsibility to treat their consumers with a bit more respect?

A: A food company official who I met in London recently says his company has a vested interest in keeping people healthy because they'll buy more food for a longer period of time. Maybe, but companies have only one requirement and that's to make a profit. When there's a conflict between corporate growth and making healthier foods, corporate growth wins out. Companies cannot go against their own economic interests. Government has to be involved. What's needed is a combination of public education, government restrictions on food industry marketing practices and anything else you can think of to fix the food environment so it is easier for people to eat more healthily.

Q: Do you foresee the obesity battleground shifting to low- and middle-income countries as growth rates for companies stagnate in wealthier countries?

A: There's no question about it. If you look at graphs of consumption of sugar-sweetened beverages, for example, sales are not growing in the USA. They are flat. But soda companies are reporting increased sales. From where? In the last couple of years, I've been collecting clippings from the business sections of American newspapers that describe the growth of American companies in low- and middle income countries. One after another says 'profits up in the fourth quarter due to sales in India'. Or China. Or Saudi Arabia. Or Africa. Because these products are associated with development and other cultural values, they are readily accepted. The companies there know how to use culturally-specific markers for advertising. They design the marketing to appeal to love, family, status and whatever emotional values are common to that particular culture. This is about selling products. It's not about health. The object is to sell products regardless of their effects on health. The governments of these countries ought to be taking a really hard look at such practices and think about the long-term health consequences and costs. In 2005, an anthropology graduate student at New York University was doing field work in a remote village in Guatemala. All of a sudden, Pepsi products appeared. The company set up villagers with carts and trucked in supplies. Her dissertation documents the results: bodyweights went up and teeth went bad. The marketing is directed at status and upward mobility, and framed as helping communities with development. The framing makes it difficult for public health personnel to intervene successfully.

A: They're not necessarily cheap but they are cheap enough and completely unnecessary.

Q: Do you think public health will ever win the battle against big corporations?

A: Well, it got detente with cigarettes, at least in richer countries. What impresses me is the increasing recognition that obesity is the result of a problem with the food environment, not just with individual behaviour. This marks a big shift in the way public health people have been talking about obesity. When I was writing Food politics, public health people were talking mostly about how to educate parents to tell their kids to eat better. Now everyone understands that obesity results from the interaction of genetics with the food environment. If we want to do something to prevent obesity, we have to change the food environment. That's a big shift.

The best example is large portions. You can tell people that large portions have more calories, but they will still eat more when given a large portion. Everyone does. Education isn't enough. You have to change the environment to make healthy choices the easy choices.

Q: Do you think agencies like the World Health Organization (WHO) are doing enough in the fight against obesity?

A: They're never doing enough. They can only do what they can. I'm impressed that the nutrition department at WHO understands that noncommunicable diseases have to be as much of a priority as under-nutrition. WHO has to figure out what, with its limited resources and limited mandate, it can do to help Member States address obesity as well as malnutrition. WHO can take the moral high ground on such issues and should be doing that.

Q: Why did you write a book about calories (Why calories count: from science to politics, University of California Press, 2012)?

Q: Is it enough to tell people how many calories there are in something?

A: No, and my co-author Malden Nesheim and I do not advise that. We don't advise counting calories because it can't be done accurately enough, it's not worth the trouble, and it's no fun. We argue for changes in the food environment to make healthy eating so easy that nobody has to think about it. I'd rather focus on portion sizes. They have increased so much in the USA that you don't need a more complicated explanation of why people are gaining weight. Larger portions have more calories! As a public health measure, smaller portions are a good idea.

Q: Do you think improvements in diet will occur bit-by-bit?

A: It's not going to be easy. The cigarette fight took 50 years and the evidence for the effects of cigarettes on health is much less complicated than the evidence for diet and health. Everybody has to eat. Doing something to prevent obesity is a problem that is much more intellectually  and politically  challenging than getting people to stop smoking. But that shouldn't stop us from trying.

[Editor's note: Marion Nestle has no affiliation to Nestlé SA.]