The relative burden due to non communicable diseases (NCD) is increasing worldwide and has been shown to be generally greater for men than women. The objective of this paper is to describe gender differences in NCD mortality rates and trends in Brazil. Standardized mortality rates for the years 1991-2010 were corrected for sub notification and ill defined causes of death and calculated using sex specific five year age grades. Trends in standardized mortality were studied using joinpoint regression models. In 2010, rates for NCDs (men: 479/100000; women: 333/100000) and for most major NCD categories (cardiovascular diseases, cancer, chronic respiratory diseases and other chronic diseases) were higher for men than women. Age standardized mortality rates declined for both sexes over the period, beginning in 1993 and attenuating in more recent years. From its peak in 1993 to 2010, the unconditional probability of dying between the ages of 30 and 70 due to one of the four principal NCD groupings decreased for men from 32.3% to 22.8%; for women, from 23.5% to 15.4%. In conclusion, age standardized NCD mortality, though decreasing dramatically over the past two decades in Brazil, remains notably greater in men than in women and, this difference, in relative terms, will increase if these trends continue.

The burden due to non-communicable diseases (NCDs) is increasing world-wide, posing a great threat to the development of the nations1,2. If current tendencies continue, a recent study estimates that the cost of NCD to the world´s economies over the next two decades could reach US$47 trillion; and for Brazil, the annual cost could reach 4% of the gross national product3. These global challenges, with particular reference to the low- and middle-income countries, have been widely discussed in recent years, culminating with the High-Level meeting of Heads of State held at the United Nations in September, 20114.

Brazil has developed a strategic plan to deal with the NCD burden5. The main lines of the plan are based on the Action Plan developed by the World Health Organization (WHO)6. Attention is focused on four main groups of diseases (cardiovascular, cancer, chronic respiratory and diabetes). As an indicator to measure the progress towards the established goals related to mortality from NCD, the WHO has proposed using the unconditional probability of a premature death due to these four groups, defined as occurring between the ages 30 and 707.

In Brazil NCD mortality is below that estimated in 2008 for most low income countries, but greater than that estimated for high income countries and also most Latin American countries8. A clear decline in NCD mortality has been observed when examining age-adjusted trends. The decline started in the 1990´s and persisted up to now, although at a lower rate in more recent years9. To be able to compare these rates over time and across groups, these mortality analyses took into account corrections for sub notification and ill-defined causes of death.

Notably, little information is available regarding gender inequalities in NCDs mortality and trends. From the WHO site, estimates indicate an almost uniformly greater mortality due to NCDs across nations8. The objective of this paper is to describe gender differences in mortality trends due to NCDs in Brazil. Additionally, given the importance of developing heath indicators for NCD prevention globally, we will estimate also, separately by sex, the unconditional probability of dying due to the four main NCD between ages 30 and 70, which is likely to be the indicator to be used in the years to follow.

Records of mortality were obtained from the Ministry of Health mortality information system (SIM; Sistema de Informação sobre Mortalidade). In this system causes of death are recorded according to the ICD-9 codes from 1991-1995 and to ICD-10 codes from 1996 until the present. The codes were divided into the major disease groups according to the WHO scheme10.

SIM became a computer-based system in 1979 and covers the whole of the national territory. The quality of the recorded information has improved consistently over the years, both from the point of view of coverage as well as the proportion of deaths due to ill-defined causes. In order to make valid comparisons across the years, the numbers of registered NCD deaths were corrected for sub-notification and ill-defined causes.

A mixed approach to estimate mortality system coverage was used. For 1991 a model life-table separated by 5-year age-groups (with 80+ being the final open ended group), regions and sexes furnished by the IBGE was used11. Data obtained from field-work carried out for the year 200812 provided empirically-based estimates of coverage for the years 2000-2010, with a single estimate for each state for each year applied to both sexes and to all age-grades. For the years 1992-1999 values were obtained using a linear interpolation between estimates for the year 1991 and those for the year 2000.

The deaths due to ill-defined causes were redistributed to the other disease categories using the methodology proposed by Mathers et al.10 This assumes that the ill-defined causes of death may be divided in the same proportions as those due to natural, non-external, causes. Thus, for each year and for each strata defined by sex, state, and age-grade, the number of deaths due to natural causes was modified by multiplying it by the following formula:

t is the total number of deaths in the strata,

e is the number of deaths in the strata due to external causes, and

d is the number of ill-defined deaths in the strata.

This correction was not applied to deaths due to external causes.

Mortality rates were calculated per 100.000 inhabitants. The population figures, furnished by IBGE, were obtained from the DATASUS site. For the years 1991, 2000 and 2010 the numbers of residents are derived from censuses. For the year 1996 the numbers are based on the IBGE population count. Linear interpolation, done at the strata level, was used to obtain the values for the intervening years.

The mortality rates were calculated for each sex-specific five-year age-grade, with 80+ being the final open ended group. The rates were then standardized according to the direct method using the WHO standard population14. Trends in mortality rates were analyzed by joinpoint regression models using the Joinpoint Software, available from the National Cancer Institute15. Models are fit to the data so as to allow for testing of whether an apparent change in trend is statistically significant. The trend is computed in segments whose start and end are determined to best fit the data. These segments are connected together at "joinpoints"16.

The unconditional probability of death due to the four disease groups cardiovascular disease, cancer, chronic respiratory disease and diabetes was obtained using a formula provided by the WHO. The first step consists in calculating the mortality rates for each five year interval:

The usual demographic practice of turning this rate into a probability was followed using the following formula:

The individual probabilities are then combined with the following formula to obtain an estimate for the interval as a whole:

This is the statistic which is then interpreted to be the unconditional probability of death between the ages of 30 and 70.

The analyses described in this paper are part of a project approved by the Hospital das Clínicas de Porto Alegre Ethics Committee.

The remaining results will always be presented with correction for sub notification and ill defined causes of death. For women, 80.2% of all deaths were due to NCD, while for men this percentage was 69.0%. The main reason for the difference is the higher proportion of external causes of death observed for men (18.2 vs. 5.0%). Considering NCD, for men and women, the main causes of death were cardiovascular diseases (28.8% men, 34.4% women) and cancer (15.8% men, 17.8% women). The percentages for chronic respiratory disease are 5.9% men, 6.2% women; and for diabetes 4.1% men, 6.9% women. The percentages for other chronic diseases are 14.5% men and 14.9% women.

An analysis of these trends using joinpoint regression models shows (Figure 1) that, although points of inflexion were somewhat different for men and women, for both the decline began in 1993 and was greater in earlier than in more recent years. The latest observable trends were an annual decline for men of 0.79%, and for women, of 1.0%. 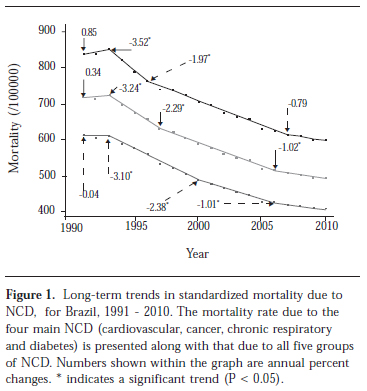 Why are NCD rates higher in men than in women? Empirically, the two main causes of death are cardiovascular and cancer; and we found both to be higher in men (Figure 2). The most common cause of cancer death, men and women combined, is lung cancer, mortality rates from which are approximately double in men compared to women18. This is consistent with the greater prevalence of smoking in men over the last decades19.

In Brazil, similar increased overall mortality rates have been described for men from 1980 to 2005, and the same was noted for preventable causes of death20. Notably, higher rates of mortality, in men than women, which have been recorded for centuries21.

The global challenge faced by the rising burden of NCDs is enormous. As has been emphasized by WHO1,2, the burden will always be more unfavorable to countries and peoples with fewer resources. Understanding and confronting the observed gender inequality is also of paramount importance in meeting the challenge. In Brazil, in 2010, the unconditional probability of dying from the four main categories of NCD between the ages 30 to 70 years is about 22.8% for men and 15.4 % for women. Further investigation is warranted regarding possible explanations for differential mortality. Are they related to higher risk factors in men (smoking, alcohol drinking)? Are they a result of greater occupational exposures? Could they be due to less chronic medical treatment (blood pressure, diabetes and cholesterol control)? Could they be caused by delayed diagnosis and treatment of fatal condition such as acute myocardial infarction, stroke and cancer?

Although corrections for sub notification and ill defined cause of death will continue to be necessary in analyses of mortality in Brazil, this should become less important over time, assuming that current improvements in both coverage and quality of death coding will continue. However, to permit analysis of past trends we will always need to rely on some type of correction. Thus, improvements in our understanding of the declines may benefit from further refinement in methods. For example, the estimation of coverage using the model life table approach in 1991 might be reviewed. Additional investigation of current rates of sub notification may improve current estimates of the decline. Nevertheless, the joinpoint analysis here presented indicates that declines have lessened in recent years.

In conclusion, NCD mortality is considerably higher in men than in women, despite the declines observed for both over the last two decades. This scenario, coupled with the greater risk of external causes of death in men, forecasts an increasingly greater gender differential in premature mortality. This is a remarkable challenge to overcome.

A Stevens, MI Schmidt and BB Duncan participated in the design, analyses and interpretation. A Stevens created the computational system for the analyses.

7. World Health Organization (WHO). Monitoring framework and targets for the prevention and control of NCDs [Homepage at Internet]. WHO. 2012 [cited 2012 Jul 14]. Available at: http://www.who.int/nmh/events/2011/consultation_dec_2011/en/