Smoking among undergraduate students in the area of health

The aim of this study was to evaluate the relationship between smoking and socio-demographic and behavioral factors among undergraduate students in the area of health at the State University of Paraíba, Brazil. An analytical cross-sectional study was conducted with a representative sample from each of the following courses: Dentistry, Nursing, Psychology, Pharmacy, Physical Therapy and Physical Education. A total of 492 students were interviewed using a structured questionnaire. The chi-square and Fisher's Exact tests were used for statistical analysis at a 5% level of significance. Smoking prevalence was 5.7% and stress was the main reason for starting the habit (36.8%). In the multivariate analysis by logistic regression, the variables of gender, religious persuasion, semester attended in the course, and alcohol consumption were significantly associated with smoking (p<0.05). Although other studies reported a strong relationship between university students and smoking, the prevalence of smokers was low. Most of the variables studied revealed a correlation with smoking. Since smoking and alcohol consumption are the two major human addictions, this study suggests a bidirectional relationship between these variables.

Smoking is currently considered a silent pandemic, the most important public health problem and the main preventable cause of death, responsible for the death of 1 in every 10 adults worldwide (5 million people per year). If the current patterns persist, smoking will cause 10 million deaths per year by the year 2020. Seventy percent of these deaths will occur in developing countries1.

Smoking has been identified as the major risk factor for the development of several diseases such as lung cancer, heart, circulatory, coronary and respiratory diseases, nicotine addiction, and sexual impotence in men. Also, it is usually the direct cause of 30% of cancer cases3-5. In addition, smoking is related to psychiatric disorders such as depression and schizophrenia, neurobehavioral developmental disorders such as attention deficit hyperactivity disorder (ADHD), drug abuse, decrease of intellectual performance and alcohol consumption6,7.

The World Health Organization (WHO) Framework Convention on Tobacco Control (FCTC) was established in response to the global tobacco epidemic. This is a landmark for public health and was embraced by all WHO member countries on May 21st 2003. Brazil signed the FCTC on June 16th 2003 and it is effective in the country starting February 2005. The FCTC contains chapters designed to protect the present and future generations from the devastating sanitary, social, environmental and economic results of tobacco consumption and tobacco smoke exposure8. Since then, tobacco consumption control has been regarded as an ethical matter and a social responsibility of the governments towards their populations9. However, there is a worldwide trend of increased prevalence of smokers among the adolescents and young adults. One third of the world population over 15 years of age smokes and Brazil has approximately 2.8 million smokers in the 5-19-year-old range1,10,11.

College is considered a critical period of vulnerability for the onset of smoking12,13. In general, studies reveal a prevalence of smokers varying from 8.5% to 52.5% among undergraduate students, with lack of physical activity, alcohol consumption, stress, and engagement in religious practice, among others, being considered as associated factors2,10,14-16. Students of health sciences courses deserve special attention in relation to smoking because they will become behavioral models conveying the basic concepts of health into the community. The aim of this study was to investigate the relationship between smoking and behavioral and sociodemographic factors among undergraduate students from health sciences courses of a public Brazilian university.

Where n = corresponds to the sample size; σ2 = confidence level chosen by number of deviations (sigma); p = proportion of the characteristics sought in the universe, measured in percentage; q = proportion in the universe that lacks the studied characteristic (q = 1 - p), measured in percentage (q = 100 p); N = population size; and E2 = allowed error estimation. In this way, the minimum sample size comprised 307 undergraduate students. This number was increased by 10% corresponding to the estimated losses, plus a 1.5 correction factor. After these calculations, the sample size consisted of 507 students.

Data collection was performed by two calibrated researchers between August and November 2008, using a structured questionnaire containing questions related to the smoking habit and associated behavioral and sociodemographic factors: tobacco use, starting age of smoking, number of cigarettes smoked per day, health sciences course and semester attended in the course, gender, age, marital status, engagement in religious practice and physical activity). At baseline, the study purpose was fully explained and the participants were asked to sign an informed consent form. The reliability of the responses was tested in 10% of the subjects by the face validation method, in which the researcher asks the subjects to explain in their own words what they understood about each question17. The interviewed subjects showed no difficulty to answer the questions contained in the questionnaire. The cutoff point for definition of smokers was based on a WHO criterion18: "to have smoked 1 or more cigarettes per day for at least 1 month" and of former smokers was: "to have stopped smoking for more than 1 month". The questionnaire was based on previous studies19,20.

Data were organized using the SPSS (Statistical Package for the Social Sciences - SPSS Inc., Chicago, IL, USA) statistical software package, presented by descriptive (absolute and percentage distributions) and analytical statistics. Associations among variables were estimated by the cross-products - odds ratio (OR) and 95% confidence intervals. The chi-square and Fisher's exact tests were used to assess the significance of the associations. Logistic regression models were used for the multivariate analysis with the variable 'response to smoking'. In the initial model were included the variables with p <0.15, and after adjustment only the variables significant at 5%.

In compliance with the Resolution 196/96 of the Brazilian National Health Council/Ministry of Health on research involving human subjects, the research protocol was recorded at the National System of Information on Ethics in Research Involving Human Beings (SISNEP) as well as submitted to and approved by the Research Ethics Committee of the State University of Paraíba, Brazil.

Table 1 shows that most of the subjects were enrolled in the Nursing course (22.4%), half of them were attending up to the 4th semester and were Caucasians, and 69.1% were Catholics. This table also shows that most students affirmed to drink alcohol (58.7%), had family income up to 3 minimum wages (39.4%), were single (93.3%) and did not live with their parents (54.5%)

Table 2 shows a smoking prevalence of 5.7% and that Psychology undergraduates accounted for the highest percentage of smokers (12.0%). Among the smokers, more than half (56.3%) consumed 1 to 3 cigarettes per day and 75% reported smoking while drinking. Regarding the starting age of smoking, the most prevalent age group was 13 to 18 years (63.2%), and stress was the main reason (36.8%) alleged by the students. 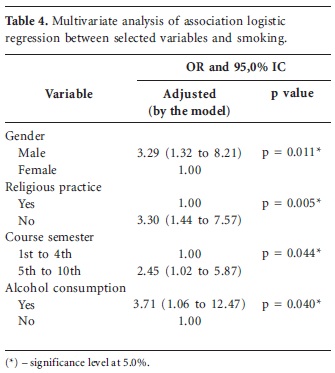 The WHO considers health professionals as the primary target of antismoking actions21, as they are future health multiplier agents. In addition, knowing the behavioral and sociodemographic factors of smoking habits provides subsidies to direct the development of research as well as educational and preventive measures on this subject.

Most students affirmed that the smoking habit started early, between 13 and 18 years, which is consistent with the literature, since virtually all smokers acquire the habit during adolescence, beginning with a mere trial of a cigarette1,12,10. The early starting age of smoking -90% under 19 years of age - has led the WHO to classify smoking among the pediatric diseases, requiring proper diagnosis, treatment and preventive measures26. A larger number of smokers were over 30 years of age, though without statistical significance. The 20-40-year-old age group has been described as the one with the highest prevalence of smokers15,21,23.

This study revealed that stress was the main reason mentioned to start smoking, as reported elsewhere14,27. Although smoking has been associated with emotional stress reduction28, friends' influence and curiosity have also been reported as strong reasons for the onset of smoking11,12,20,29.

Women have been extensively targeted by the marketing actions of the tobacco industry. For this group, the tobacco industry generally makes advertisements conveying messages of beauty and independence, with young people, photographic models, athletes and ideas that associate cigarette smoking with individual freedom26. This approach has resulted in an increase of cigarette consumption. However, in spite of this trend of increase of female consumers21,30, there was a higher prevalence among male students (OR = 3.29, 95% CI 1.32 to 8.21 and p = 0.011) in the present study. This result is supported by the literature10,19,24. This smoker profile has also been reported in young students from the Paraíba capital city in a previous nationwide study26.

The prevalence of smokers was similar among ethnical groups with no association between this variable and smoking habit (0.744). On this subject, it has been shown a larger number of smokers among Caucasian and Afro-descendant youngsters11,31. There was no association between the marital status and smoking (p = 1.00). Similar results were reported by other authors7,23.

Belonging officially to a particular religion is frequently just a formality not likely to influence the behavior14. Thus, the subjects were asked if they effectively practiced some religion. It is assumed that by practicing a religion the individual belongs to a group with established and shared values and norms, in which there is an explicit and clear condemnation of overall drug use7. Confirming these assertions, there was greater chance of being a smoker among students not engaged in religious practice (OR = 3.30, 95% CI 1.44 to 7.57, p = 0.005). This was also observed in other studies7,20.

There was a higher smoking prevalence in the second half of the course (OR = 2.45, 95% CI 1.02 to 5.87 p = 0.044) and these data are supported by literature24,27. This could be due to the influence of friends, parties, especially if they believe that it is a normal way of relieving stress32. In addition, the stress throughout the course may have resulted in the increase in the number of smokers15,16, as discussed earlier.

Tobacco and alcohol use are two major human addictions, and thus a possible association between these variables was also evaluated. Most smokers were alcohol consumers (OR = 3.71, 95% CI 1.06 to 12.47 p = 0.040). In addition, it was found that 75% of smokers smoked while drinking, suggesting a bidirectional relationship between tobacco and alcohol consumption. However, this relationship can also be unidirectional33. The association between these two drugs has been demonstrated in other studies7,11,20,34.

The knowledge of factors related to smoking is required for the achievement of adequate institutional programs aimed at reducing the number of smokers, especially in the health area. Higher education plays a key role for establishing plans and preventive actions to give the students an opportunity to influence the community where they operate. It is important to notice that the failure to perform the test-retest was a limitation of this study, and for this reason we suggest that they are performed in future studies. The smoking prevalence was low, with early starting age and stress as the main reason for smoking. Among the behavioral and sociodemographic variables, gender, semester attended in the course, practice of religion and alcohol consumption were associated with smoking. Based on these results, the authors intend to perform a deeper investigation on this subject, including a qualitative research to evaluate differences in smoking prevalence among the graduation courses as well as the students' perception of smoking. A longitudinal study is also under consideration to evaluate the influence of the established tobacco-free environments at the State University of Paraíba on the decrease of prevalence of smokers among the students.

25. Hoshiyama Y, Sasaba T. A case-control study of stomach cancer and its relation to diet, cigarettes, and alcohol consumption in Saitama Prefecture, Japan. Cancer Cause Control 1992; 3(5):441-448.