Lifestyle among former cancer patients in Brazil in 2013

People who have been diagnosed with cancer tend to adopt healthier lifestyles. This study analyzes the prevalence of smoking, eating fruits and vegetables, exercise and the use of alcoholic beverages among individuals who reported to have been diagnosed with cancer in the PNS (Pesquisa Nacional de Saúde or National Health Survey). The prevalence and corresponding 95% confidence intervals were calculated for consuming fruits and vegetables, sedentary lifestyle (no exercise), use of alcoholic beverages, being overweight and tobacco use. The associa-tion between having received a diagnosis of cancer and the risk and protection factors was analyzed using a Poisson regression, adjusted by sociodemographic variables and other chronic comorbidities. The analyses were stratified by time since the diagnosis and the type of cancer related to the factors analyzed. The types of cancer most often reported were breast and cervix in women, and prostate and stomach in men. Among those who had cancer diagnoses, there was a higher consumption of fruits and vegetables, higher proportion of ex-smokers, however, increased use of alcohol. There was no difference in the frequency of exercise or incidence of being overweight between the two groups. Measures to promote health and prevent chronic diseases should be implemented in the follow-up of people who have had cancer, in an effort to ensure integrated healthcare.

The diminished lethality of some types of cancer has allowed a growing number of individuals to survive a diagnosis of cancer.

For the first time, the joint IBGE and Ministry of Health PNS (National Health Survey)77. Instituto Brasileiro de Geografia e Estatística (IBGE). Pesquisa Nacional de Saúde 2013: percepção do estado de saúde, estilos de vida e doenças crônicas – Brasil, Grandes Regiões e Unidades da Federação [Internet]. Rio de Janeiro: IBGE; 2014 [acessado 2015 jan 9]. Disponível em: ftp://ftp.ibge.gov.br/PNS/2013/pns2013.pdf conducted between 2013 and 2014 collected nationally representative data on people who received the medical diagnosis of cancer. The survey also provided data on the sociodemographic characteristics and variables indicative of lifestyle that enable looking at distinctions between adults who at some point in life were diagnosed with cancer, and those who were not. The goal of this study was to analyze factors related to lifestyle (tobacco use, eating fruits and vegetables, regular exercise and the use of alcoholic beverages) among people who have been diagnosed with cancer.

The PNS sample plan used clusters in three stages. The primary units were the census sectors, the secondary units were the households, and the tertiary units household members 18 years or older. Census sectors were stratified according to four criteria: administrative (state capital, remainder of the metropolitan region or integrated economic development region (RIDE) and other cities in the State), geography (sub-divides state capitals and other large cities), status (rural or urban) and statistical.

Participants were asked if they had even been diagnosed with cancer by a physician, its primary location and age at first diagnosis. To classify individuals with a diagnosis of cancer, we used the following primary locations: lung, intestine, stomach, breast, cervix, prostate and other. Individuals who reported a history of cancer were grouped by years since the first cancer diagnosis into less than ten years or ten years or more. As most skin cancers are non-melanocytic, and most of these tumors evolve satisfactorily, reports of skin cancer were not considered99. Instituto Nacional de Câncer (INCA). Estatísticas de Câncer. Registros de Câncer de Base Populacional. Estimativa 2014: Incidência de Câncer no Brasil. Rio de Janeiro: INCA; 2014., which excluded 182 subjects from this analysis.

Eating cooked or raw fruits and vegetables was analyzed based on the weekly frequency (0 to 7 days), and the number of portions a day (0 to 3 or more a day). Eating 12 or more portions a week, as recommended by the World Health Organization (WHO) was considered a protection factor2424. Rubin DB. Multiple imputation for nonresponse in surveys. New York: John Wiley & Sons Inc.; 1987..

Activities were assessed based on time spent and weekly frequency for leisure, work, household chores, going to and from work or regular activities reported in the past three months. We used two indicators for this: exercise as leisure (no/yes) and level of physical activity according to WHO recommendations2424. Rubin DB. Multiple imputation for nonresponse in surveys. New York: John Wiley & Sons Inc.; 1987. (less than or more than 150 minutes a week).

Tobacco use was described as the use of any tobacco product as the share of daily smokers (smokes daily or does not smoke/smokes less than one cigarette a day) and former smokers (yes or no).

We also found instances of missing information regarding the diagnosis of hypertension (3%, n = 1,787) and diabetes (11.6%, n = 6,986. As these variables might also influence the outcome and therefore had to be included in the models to avoid confounding, they were both imputed. As these losses were distributed randomly, the missing data was imputed using decision trees, a multivariate, non-parametric classification technique that enables identifying the variables to be imputed based on the predictive variables available for the entire set of individuals2929. Nordbotten S. Neural Network Imputation Applied to the Norwegian 1990 Population Census Data. J Off Stat 1996; 12(4):385-401.,3030. Wang Z, McLoone P, Morrison DS. Diet, exercise, obesity, smoking and alcohol consumption in cancer survivors and the general population: a comparative study of 16 282 individuals. Br J Cancer 2015; 112(3):572-575.. In this case, in addition to gender and age we also used the date of the last blood glucose assay for diabetes, and the date of the most recent blood pressure measurement for hypertension, as auxiliary variables to predict the missing diagnostic data.

The relative frequency of outcomes related to food consumption (high consumption of fruits and vegetables), exercise (sedentary, failure to achieve 150 minutes/week of physical activity), drinking (alcoholic beverages ≥ 5 days a week and ≥ 1 day a week) and tobacco use (daily smoker and former smokers) were also calculated for adults with and without a diagnosis of cancer.

Poisson regressions were used to estimate prevalence ratios and their 95% confidence intervals for the association between a diagnosis of cancer and the risk and protection factors, using as a reference the population without a cancer diagnosis. Model 1 was adjusted using sociodemographic variables (age, gender, race/color and education), while model 2 used sociodemographic variables and other morbidities (hypertension, diabetes, coronary disease, stroke, depression, chronic obstructive pulmonary disease). We then ran analyses stratified by time since the cancer diagnosis (< 10 years or ≥10 years), adjusted by sociodemographic variables and other morbidities. We finally calculated the prevalence of the risk and protection factors for the types of cancer related to nutrition (lung, intestine and stomach), physical activity (intestine, breast and prostate) and tobacco use (lung, stomach and cervix). As the PNS describes only the more frequent types of cancer and consigns al others to the “other cancer” category, the tumors related to obesity we were able to study were limited to the same tumors that are related to the use of alcoholic beverages (stomach, intestine and breast). All analyses used Stata 12.1 and considered the sample design. Statistical significance was considered for p < 0.05.

The PNS was approved by the Brazilian National Research Ethics (CONEP), and complies with National Health Board (CNS) Resolution n. 466 of December 12 2012.

Thumbnail
Table 1
Sociodemographic characteristics of individuals who have and have not been diagnosed with cancer, National Health Survey (PNS) Brazil, 2013.

Thumbnail
Table 2
Behavioral risk factors in individuals with and without a diagnosis of cancer. National Health Survey. Brazil. 2013.

Thumbnail
Table 3
Behavioral risk factors in the general population (reference) and individuals who have been diagnosed with cancer, by time since diagnosis. National Health Survey. Brazil. 2013.

Thumbnail
Table 4
Behavioral risk factors in the general population (reference) and individuals who have been diagnosed with cancer by type of cancer. National Health Survey. Brazil. 2013.

The results of this study show that people who have had cancer seem to adopt, in part, healthier lifestyles, tending to eat fruits and vegetables more frequently and stop smoking. However, we found no difference in terms of exercise or obesity, and the use of alcoholic beverages was almost twice as frequent among this population.

This study shows that the relationship between exercise and a diagnosis of cancer disappears after adjusting for other chronic diseases, which may indicate that exercising is recognized as an important factor for preventing other chronic diseases such as diabetes and cardiovascular disease, but not so much for cancer prevention. We found no difference in the prevalence of obesity between those with and without a cancer diagnosis, a fact that caught our attention.

In Brazil, the rapid increase in the prevalence of excess weight and obesity is a nation-wide phenomenon3535. Gomes FS, Castro IRR, Monteiro CA. Publicidade de alimentos no Brasil: avanços e desafios. Cienc. Cult. 2010; 62(4):48-51.. Exposure to advertising and other forms of marketing for these products is not well regulated, and their use is viewed as natural, with the penetration of advertising for these products facing off against the recommendations of the health authorities3636. Henriques P, Dias PC, Burlandy L. A regulamentação da propaganda de alimentos no Brasil. Cad Saude Publica 2014; 30(6):1219-1228.,37 making it difficult for the population to follow health authority guidelines. Furthermore, it takes more time to detect changes in excess weight due to the accumulation of body fat over our lifetimes, sometimes since early childhood.

Using the data collected in the PNS we were able to show difference in lifestyle among those who have had a cancer diagnosis. However, we must expand and adjust prevention strategies for risk factors of chronic diseases for those who have had cancer. Prospective studies to assess what happens to cancer survivors in Brazil, not only in terms of the effectiveness of the clinical treatment, but also including a broader assessment to promote health should be encouraged.

Table 1   Sociodemographic characteristics of individuals who have and have not been diagnosed with cancer, National Health Survey (PNS) Brazil, 2013. 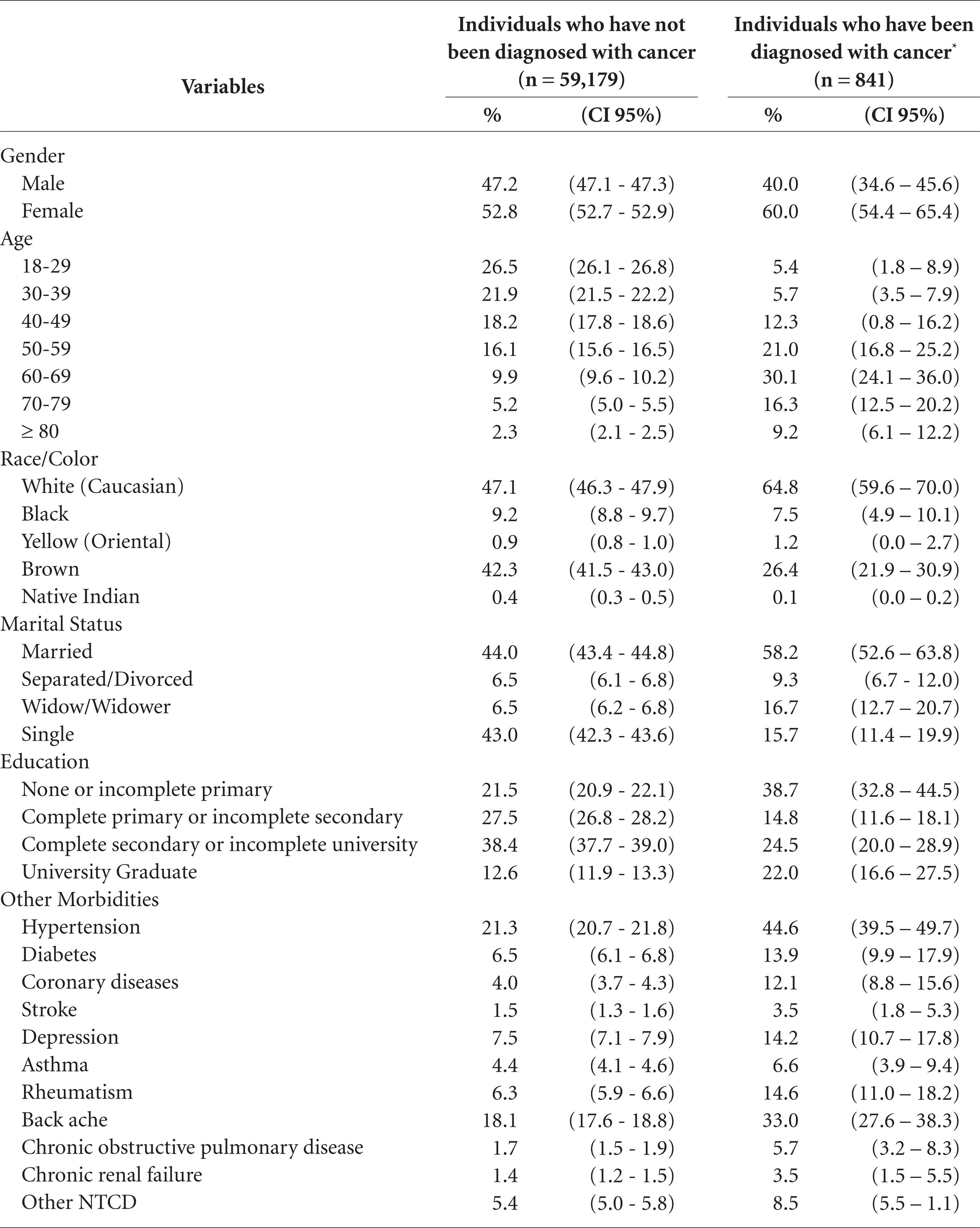 Table 2   Behavioral risk factors in individuals with and without a diagnosis of cancer. National Health Survey. Brazil. 2013.

Table 3   Behavioral risk factors in the general population (reference) and individuals who have been diagnosed with cancer, by time since diagnosis. National Health Survey. Brazil. 2013. 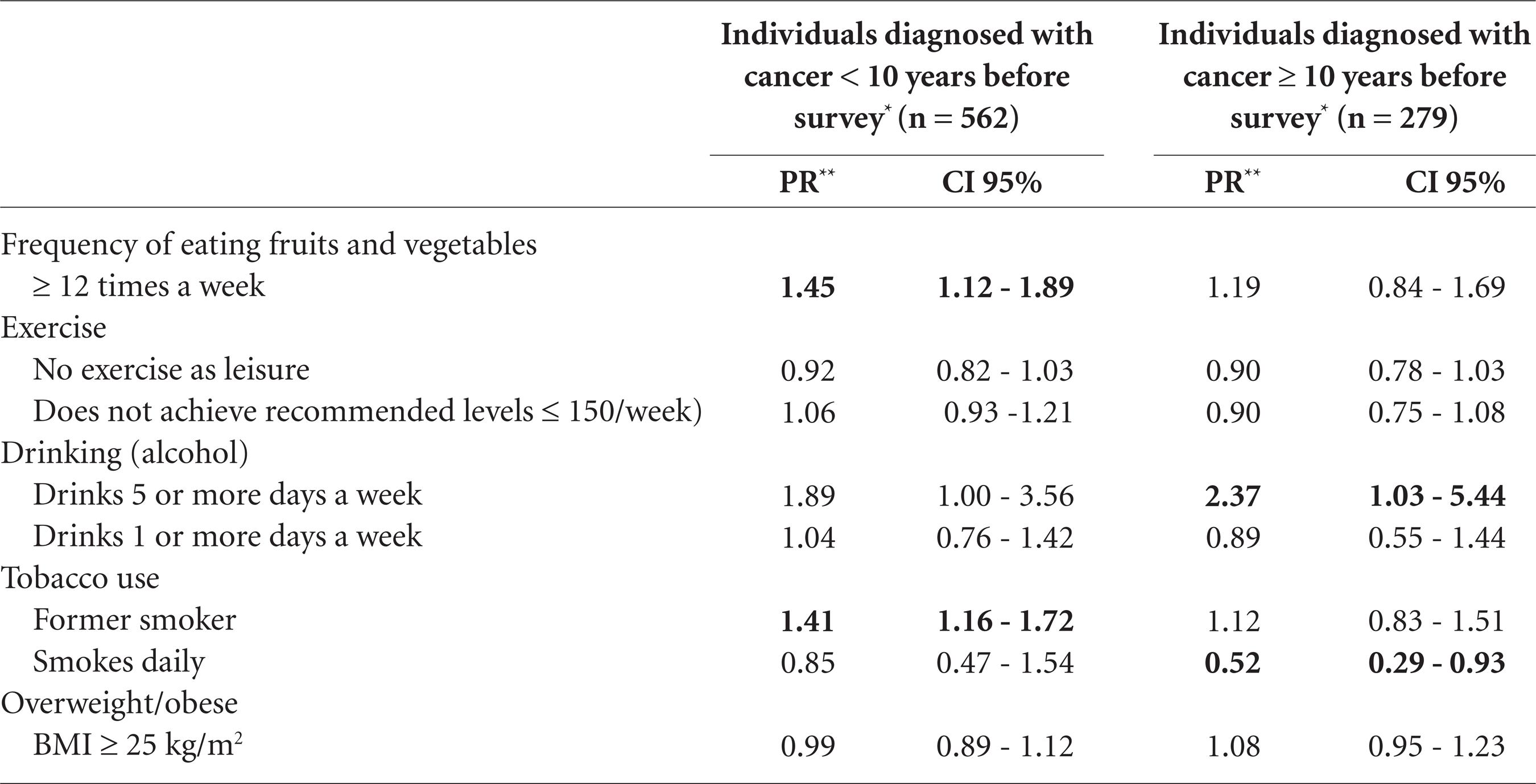 Table 4   Behavioral risk factors in the general population (reference) and individuals who have been diagnosed with cancer by type of cancer. National Health Survey. Brazil. 2013. 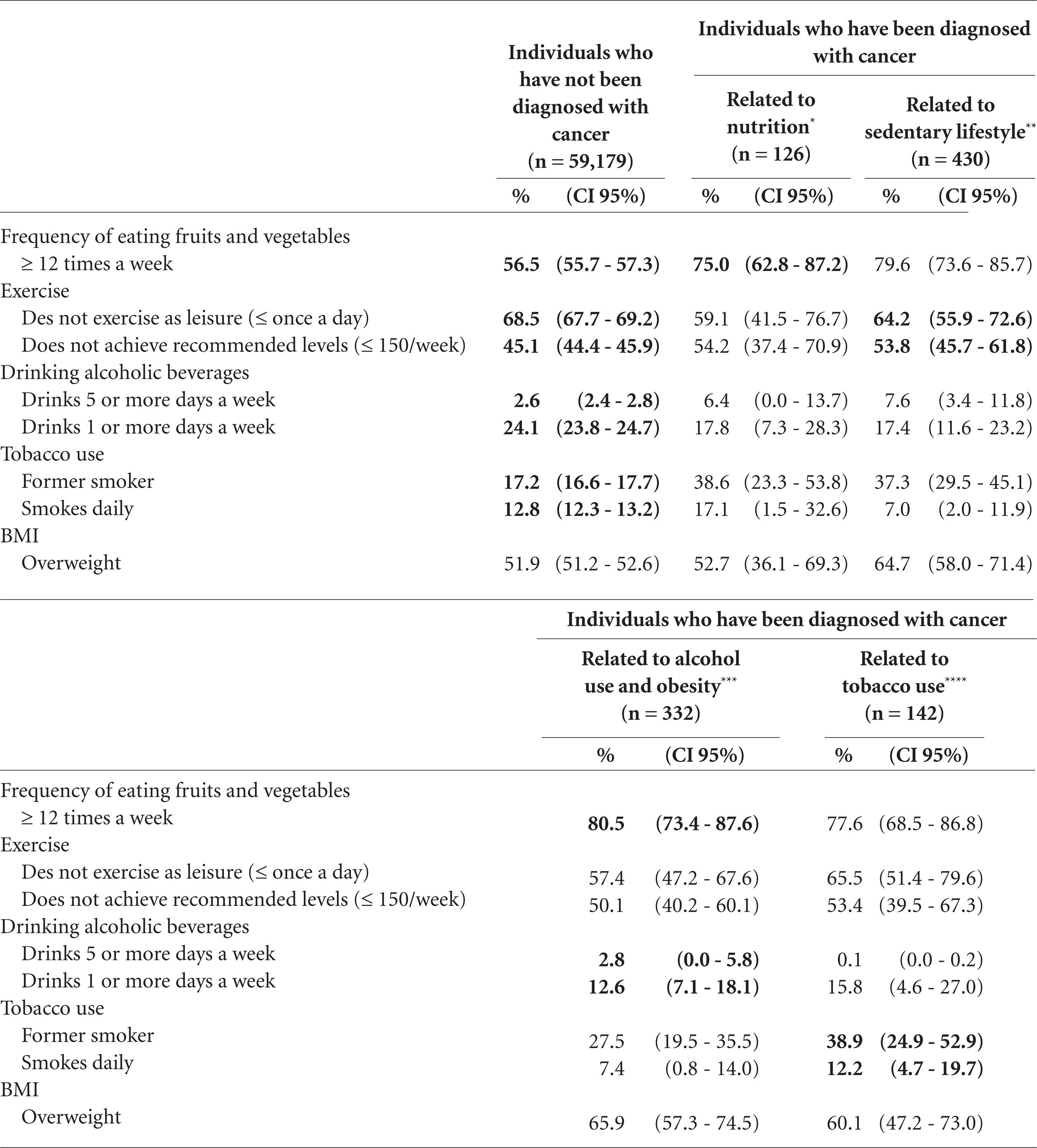