The climate and its variables such as rainfall and temperature have a great influence on society, especially concerning the main basic survival needs for mankind as air, water, food and shelter. Taking this on consideration, the human beings have been influencing inadvertently the local urban landscape through their activities, and in turn producing a chaotic urban space. Thus, this contributes to environmental degradation and the possible increase of diseases that encounter especially in urban places, favorable conditions for their spreading11. Araújo RR, Nunes JSA. Relações Geográficas entre o Clima e a incidência de dengue na cidade de São Luís - MA. Rev Ciências Humanas 2005; 3(2):8-11..

Dengue is an acute febrile illness caused by flavivirus. Four different serotypes are known (DENV-1, DENV-2, DENV-3 and DENV-4). Clinically, dengue may have a benign or severe course. According to the way the disease manifests it may be sorted as dengue without warning signs, dengue with warning signs and severe. Currently, it is considered as the most important arboviral disease that affects human beings and a serious public health problem worldwide. Dengue is seen especially in tropical countries, where environmental conditions favor the development and proliferation of Aedes aegypti, the main vector33. Brasil. Ministério da Saúde (MS). Secretaria de Vigilância em Saúde. Guia de Vigilância Epidemiológica. Brasília: MS; 2006..

The dengue-transmission patter is only through the bite of female mosquitoes, which after feeding on contaminated blood transmits the virus to a near susceptible host. When the mosquito feeds on a healthy man the cycle is closed, man - Aedes aegypti – man33. Brasil. Ministério da Saúde (MS). Secretaria de Vigilância em Saúde. Guia de Vigilância Epidemiológica. Brasília: MS; 2006..

Ecological study performed with autochthonous dengue cases that were notified and confirmed from 2003 to 2010 in São Luís, Maranhão. Data of rainfall and temperature were collected monthly. São Luís is the capital of Maranhão situated in the northern part of this state. It is located on the shore and is featured by mangroves and beaches. Its average altitude is 32m and geographical coordinates are 2° 31’ LS and 44° 18’ LW.

The notified confirmed cases of dengue were obtained from the Superintendence of Sanitary and Epidemiological Surveillance (SVES) of the Municipal Health Bureau of São Luis and the data of rainfall and temperature (minimum, mean and maximum) in the Climatology Laboratory of the Geoenvironmental Center at the State University of Maranhão (UEMA). The population estimates used to calculate the monthly and annual incidence of dengue cases were obtained from the Brazilian Institute of Geography and Estatistics1212. Instituto Brasileiro de Geografia e Estatística (IBGE). Censo demográfico. Rio de Janeiro: RJ; 2010.. The monthly incidence of dengue was calculated from the total cases of the month divided by the estimated population in the current year of study and multiplied by 100,000. Thus, we obtained the incidence of the disease in every one hundred thousand inhabitants.

The negative binomial distribution with mean µt was used for the dependent variables yt, notified cases of dengue in month t, with t being 1,…,96. This model was used because the variance of the number of reported cases of dengue was higher than the average. This is featured as an over-dispersion of data. Thus, the MLD assumes µt being the average of the dependent variable yt, Xit-1 as the explanatory variables and their lags in the month and β1 the parameters that measure the effects of lag l (l = 1,2, ...., L). The term log (Nt) known as offset, represents a covariate with linear coefficient equal to 1.

The variables were adjusted in separate models due to the existence of a linear relationship between the maximum, mean and minimum temperature variables (collinearity). Each variable was compared with the variable rainfall with lags of up to three months. The annual population data were entered in the regression models as an offset, using the logarithmic function.

The fittest model was chosen based on the criterion AIC (Akaike Information Criterion). The model with the lowest AIC is the best fit to the data. Data were analyzed using STATA 12.0 software. The level of significance was 5%. The study was conducted using secondary public domain data from SINAN, respecting the anonymity of cases.

When comparing the values of AIC, it is noticed that the lowest AIC were observed in the variables minimum temperature and rainfall with three months lag according to the adjusted model (Table 2).

It was observed that only the variable rainfall with three months lag was significantly associated with the number of dengue cases (p = 0.026) (Table 3).

In this study, we observed that the months of March and April of 2005 (7.903mm and 7.272mm) and 2007 (17.653mm and 37.791mm) had higher rainfall indexes and from the following months there was an increase in dengue cases. These results are in accordance with those found in the literature, considering the time between the biological factor, transmission and registration of cases in the information system1414. Ribeiro AF, Marques GRAM, Voltolini JC, Condino MLF. Associação entre incidência de dengue e variáveis climáticas. Rev Saude Publica 2006; 40(4):671-676.,1515. Gomes AF. Análise espacial e temporal da relação entre dengue e variáveis metereológicas na cidade do Rio de Janeiro no período de 2001 a 2009 [dissertação]. Rio de Janeiro: Escola Nacional de Saúde Pública Sérgio Arouca; 2011..

Moore1616. Moore CG. Predicting Aedes aegypti abundance from climatological data. In: Lounibos LP, Rey JR, Frank JH, editors. Ecology of mosquitoes. Vero Beach: Florida Medical Entomology Laboratory; 1985. p. 223-233. showed that temperature was not a good factor of larval abundance when studying the relationship between cases of dengue, temperature and rainfall, with the plenty of Aedes aegypti mosquitoes. Nevertheless, the amount and the number of days with rain may be a useful predictor of abundance. This is often accepted although it is necessary to consider that rates of viral infection in the vector also vary with climate conditions.

The infestation levels of Aedes albopictus, which oviposition occurs preferentially outside the household, seems to be more influenced by the rain. On the other hand, Aedes aegypti which is a totally domiciled vector uses many types of containers whose water is independent of rain, and thus, is less affected by the season2323. Pinheiro VCS. Frequency, diversity and productivity study on thee Aedes aegypti most preferred containers in the city of Manaus, Amazonas, Brazil. Rev Inst Med Trop 2002; 44(5):245-250

Lack or inconsistency of information was one of the major difficulties faced by us in this study, mainly concerning to lack of diagnostic confirmation by laboratory exams that represents a significant number of cases that were not included. Despite these limitations, the results of this study allowed a diagnosis of the dengue cases situation in São Luís, showing the relationship with climate variables. Occurrence of dengue cases was observed in all the months and years studied, which allows us to feature the behavior of the disease in this city as endemic and epidemic. The rainfall index with three months lag, showed a positive association with the number of dengue cases. 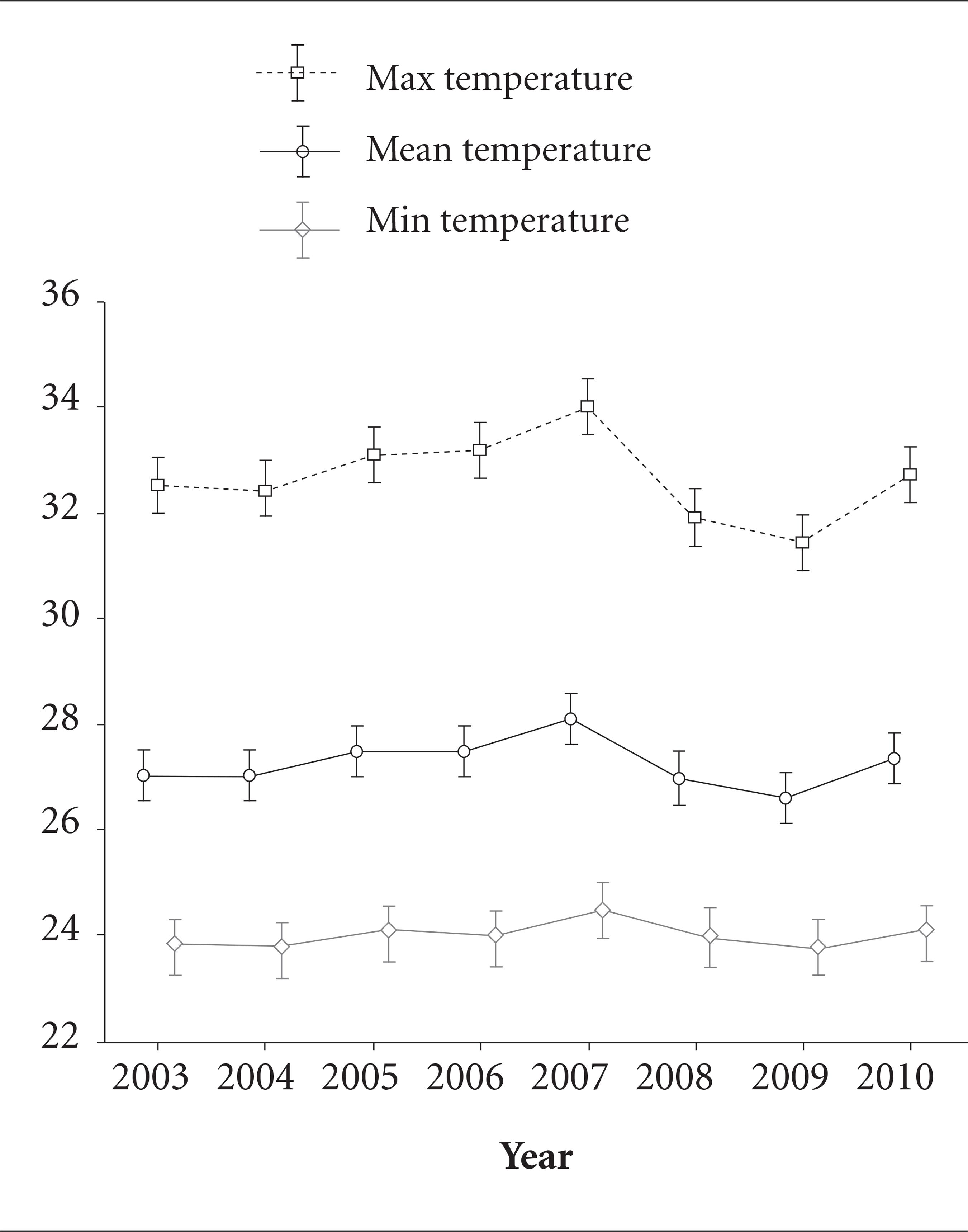 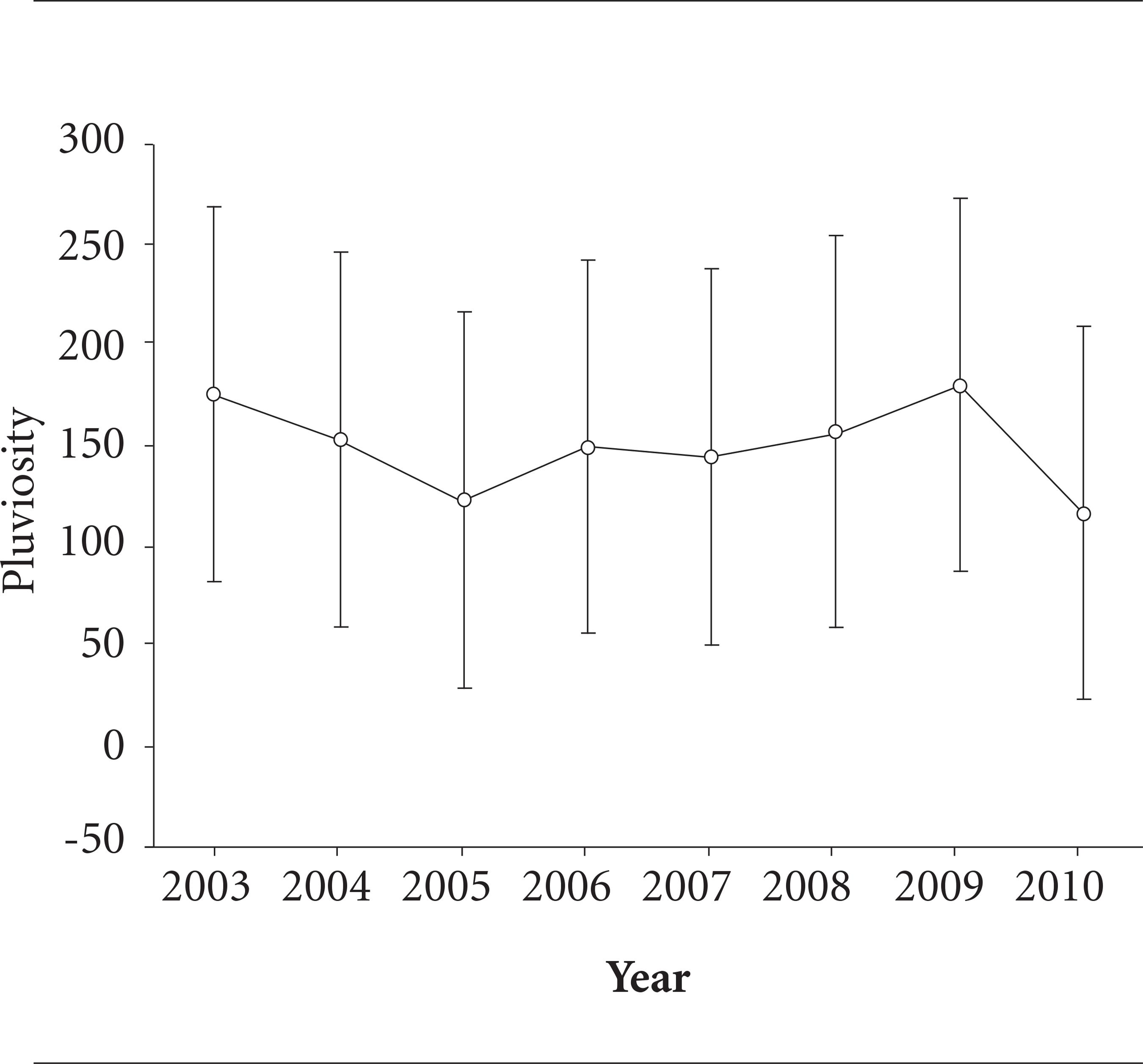 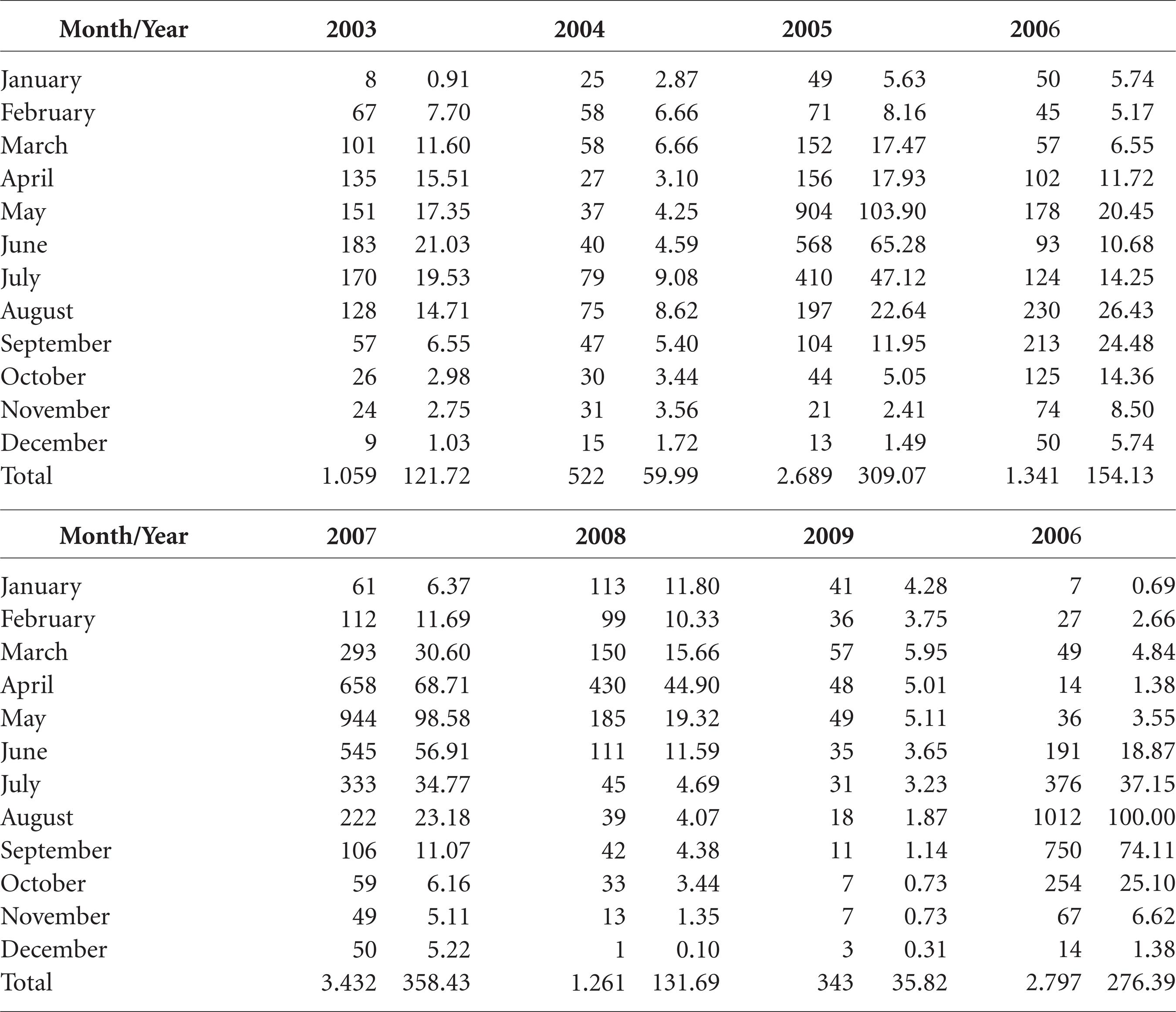 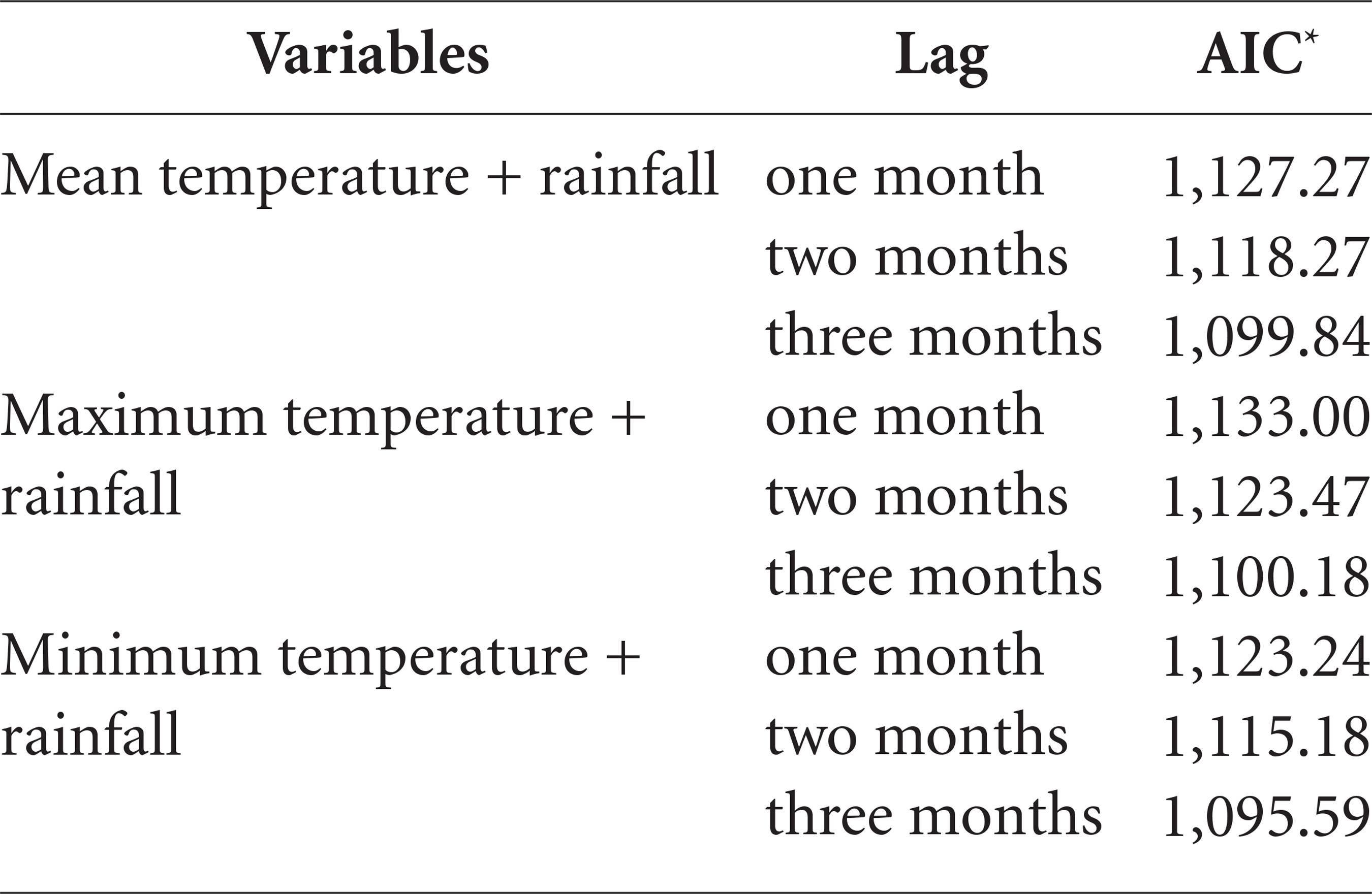