About the authors
Löwy, I. . Imperfect pregnancies: a history of birth defects and prenatal diagnosis. Baltimore: Johns Hopkins University Press; 2017.

In this work, Ilana Löwy discusses the fusion between pure and applied science, connected to the socio-technical developments that describe the history of the production and dissemination of prenatal diagnosis as a device, including its transformations, motivations, and material, political, moral and sociocultural consequences.

According to the Foucaultian meaning, prenatal diagnosis is taken as a device because it is “a heterogeneous set of discourses, institutions, architectural forms, regulatory decisions, laws, administrative measures, scientific statements, philosophical, moral and philanthropic propositions” (free translation), which allows for surveillance and control of pregnancy.

Moreover, if we consider that “(...) prenatal diagnosis is a diagnosis”, we see that the reflections of the Sociology of Diagnosis provide essential elements for the production of knowledge about health, illness and society practices when analyzing the diagnosis as a category, process, and consequence11 Jutel A. Sociology of diagnosis: a preliminary review. In: McGann PJ, Hutson DJ, editors. Socioloy of Diagnosis. Bingley: Emerald; 2011. p. 3-32.. As a category, it refers to the regulation of signs perceived by health professionals and symptoms referred by pregnant women, translated into the formal classification that generates the nosological entity; as a process, it refers to the method of evaluation comparing tests, observation of other clinical professionals and individual experience with technological intermediation; as a consequence, it addresses the repercussions for those involved – patients, caregivers, relatives, researchers, and other professionals, but also associations, organizations, and institutions.

These elements are not neglected by the author, who highlights the process involved by the historical perspective of the development of prenatal diagnosis that engenders categories (anomalies) while discussing their consequences permeated by moral and bureaucratic-legal elements, which vary over time and space. We must consider the different consequences of prenatal diagnosis and how and by whom they are assumed when it comes to developed countries, as from where the author speaks of, or those marked by social inequalities that are reflected in health, such as Brazil.

In the context of efforts to ensure access to prenatal care, what are the consequences and who would benefit from prenatal diagnosis? Advance knowledge of fetal anomaly alongside restricting alternatives and institutional backing for what to do can further expose disadvantaged social segments both in deciding to terminate pregnancy on their own (by resorting to unsafe practices) and in continuing it with resignation and under the moral, charitable, philanthropic and welfare auspices. In this regard, the controversies that persist over assisted abortion in the case of anencephaly are exemplary in Brazil, although it has been decriminalized since 2012. Recently, the debate has been revived in the face of cases of microcephaly associated with Zika Virus that have significantly affected impoverished regions and populations in Brazil, and its advocates were rejected.

The work is organized in Introduction, which announces the practicable fetal scan by changing the observation of dead fetuses to live ones real-time, and reveals the shift of focus from women’s health to the fetus, under the duality of the subject of care, with the occurrence of feminist discourses on the rights of one or the other, along with eugenic criticism. Next, are six chapters with some autonomy, and it finalizes with the topic of Conclusions.

The opening chapter Born Imperfect: Birth Defects before Prenatal Diagnosis covers the scientific construction of prenatal diagnosis in the nineteenth century. This period witnesses the detection of the RH factor and pregnancy/fetus incompatibility, and the innate disabilities possibly associated with anomalies, initially focusing on visible disabilities, such as Down Syndrome. In the set of measures to eliminate deformities and reduce neonatal mortality, pronatalist policies (childcare, maternity leave) and professionalization of prenatal care and screening, together with the thrust in embryology and teratology, have emerged.

Chapter Two Karyotypes addresses new diagnostic technologies, with the study of human chromosomes, the identification of the RH factor and major fetal malformations initially visible by X-ray followed by the analysis of fetal cells in the amniotic fluid, with the discovery of “Barr body” as a universal sexual marker; as well as jumping by chromosomal analysis, identification of anomalies and description of corresponding syndromes.

Chapter three Human Malformations discusses the legalization of abortion in the face of severe congenital disabilities and makes us reflect on life as a right, considering the importance of interactions between heredity and the environment as a whole. These constructs have been greatly expanded since the nineteenth century and were outlined between weaknesses and successes in the scientific evidence of anomalies, tracking, and establishment of population-based screening, highlighting the rationalization of the normal and the pathological.

Similarly, Chapter Four, From Prenatal Diagnosis to Prenatal Screening, highlights the detection of fetal anomalies that cause mental disability, monetary costs, the need for ongoing management, and the ambivalent issue of social justice, by blurring the boundary between individual and social choices. It also discusses fetal risks and moral/cultural issues that influence the provision of obstetric screening, women’s acceptance of screening, the decision to terminate the pregnancy, care management, and how the fetus is understood as a potential life.

Chapter Five, Sex Chromosome Aneuploidies explores the sex-based chromosomal anomalies illustrated by Turner and Klinefelter Syndromes, and the dilemmas of the chromosomal dictators of sexual expression and the influence of diagnosis on whether or not to terminate the pregnancy. This concept is linked to the anatomy, physiology, and the number of chromosomes expressed, according to the author, the dissociation between genetic diagnosis and its concrete meaning, and the debate on the discussion on the sociocultural construction of gender gained ground.

The last chapter, Prenatal Diagnosis and New Genomic Approaches, addresses fetal DNA blood testing from the 2010s onwards, renamed Noninvasive Prenatal Testing - NIPT. Minimizing invasive diagnostic measures are combined with cheaper tests to be incorporated into the prenatal routine. The relationship of the creators of these tests with the market and the state, as well as the disputes over intellectual property and market control, are brought to light. Discussions on the ethical dimensions of fetal genome sequencing, reconfiguring discussions on eugenics, the anticipated normality of the individual/fetus and mothers’ decision to detect chromosomal anomalies are also added.

In the Conclusions, Löwy summarizes the consequences of prenatal diagnosis dissemination; its ambivalences and controversies; the action of the use of techniques that causes so many actions in humans and nonhumans, entangled in dynamic and permanent flows, confirming, in repeated interlocution with Latour22 Latour B. Morality and Technology: the end of the means. Theory, Culture and Society 2002; 19(5-6):247-260., that technologies are “active agents”.

We should be reminded that the public or private nature of health services, as well as professional entities, can give specificities to the use of prenatal diagnosis. In Brazil, through the Unified Health System, technical standards are in place for early prenatal care and whose risk classification guides the requirement and provision of obstetric ultrasound33 Brasil. Ministério da Saúde (MS). Atenção ao pré-natal de baixo risco. Brasília: MS; 2012., while the Brazilian Federation of Gynecology and Obstetrics Societies recommends the quarterly examination44 Federação Brasileira das Sociedades de Ginecologia e Obstetrícia (FEBRASGO). Assistência pré-natal. Manual de Orientação. Rio de Janeiro: FEBRASGO; 2014..

Thus, if the public sphere depends on specific protocols and the feasibility of providing the test, the private sphere relies on the discretion of each technically guided professional, but also by the parents’ demand and the coverage by the health plan or particular costs assumption. The most sophisticated, complex, and expensive tests would also proceed this way. The fact is that one slips into what to do with such predictive practices that may have an end in themselves, fueling their consumption and public spending or not. The emphasis on the molecularization of life, from which these practices derive, can unfold in individualized interventions, blurring the collective, cultural dimension and the most critical perspective of the concreteness of existence, investments in science, technology and public policies (highlighting those focused on health in a broader sense and as a right), especially in the context of historical inequalities.

Finally, the analysis of the “slippery” theme such as prenatal diagnosis is challenging and requires attention to the ethical and moral polarization of the perspective, since the material, institutional, economic, sociocultural and political elements that shape such a device are not dissociated, and there may be differences in their historically situated applications. Given its unveiling hue, the reading of the work is provocative, inspiring and recommended for researchers in general, managers, professionals, and students in the health sector and other discussion partners who dialogue with the subject. 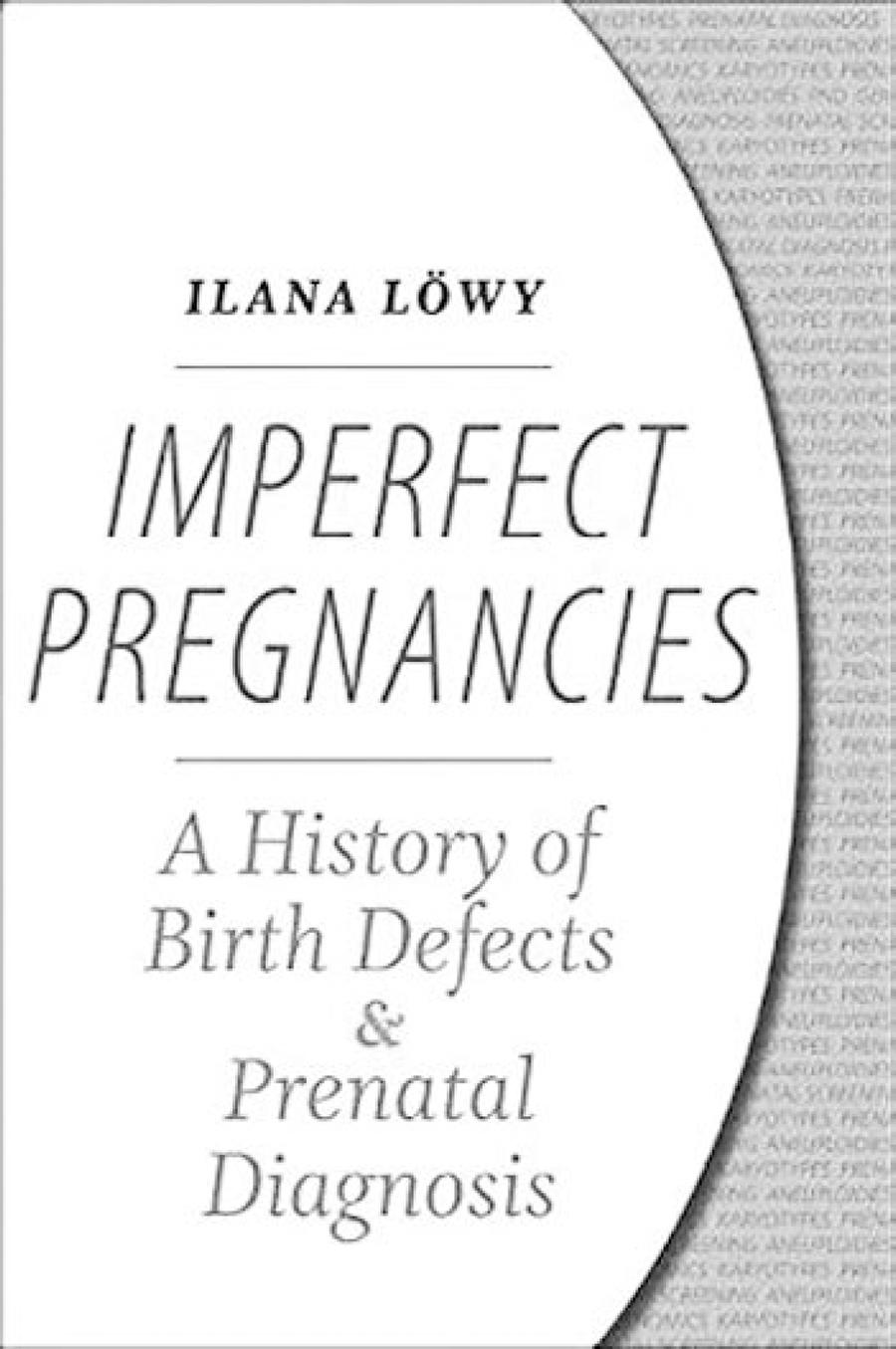