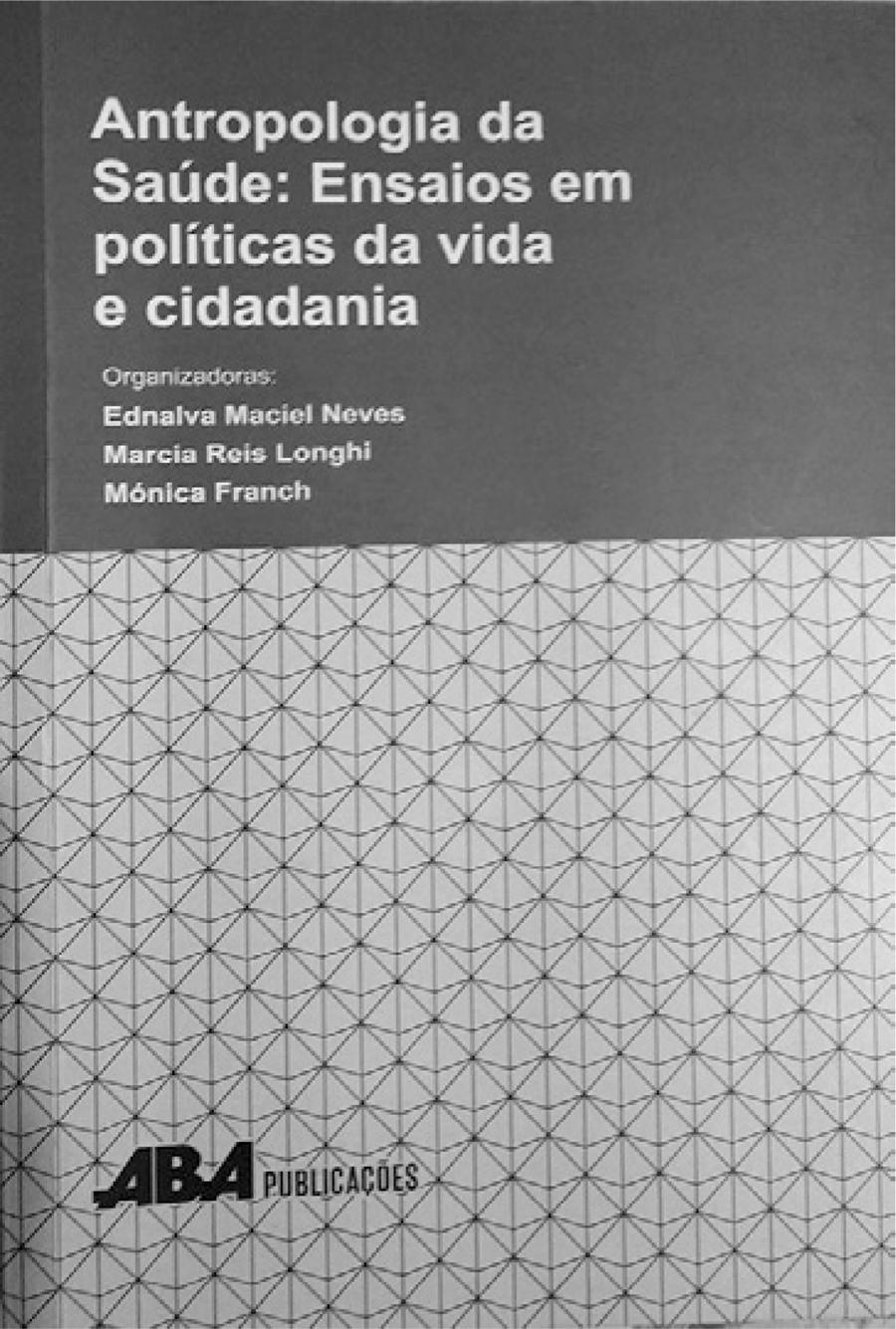 The approach brought by the Anthropology of Health is broad and diverse. The publication “Antropologia da Saúde: Ensaios em Políticas da Vida e Cidadania” (Anthropology of Health: Essays on Life Politics and Citizenship), by Neves, Longhi and Franch 11. Fassin D. Humanitarianism as a Politics of Life. Public Culture. Society for Transnational Cultural Studies 2007; 19(3):499-520. , focuses life politics to question which lives matter when it comes to health policies and what form these lives’ relationship with the state takes. Thus, the different ethnographic contexts analyzed bring forth the theoretical-methodological framework of Social Sciences and Humanities in Health, but also the subtleties and problems that involve each object studied in order to highlight what is at stake when it comes to health.

The book gathers, compellingly and assertively, contemporary issues – such as religion, abortion, alcoholism, research ethics, HIV/Aids, rare diseases, bionetworking, embryo production and the use of hormones – with the objective of better understanding health interventions, but also to present what evades protocols and prescriptions. Therefore, the analyses are directed to administrators, health professionals, Collective Health and Social Sciences researchers and others interested in rethinking the current health policies, management actions, daily practices in health services and even the implication of society in the search for health rights.

The texts result from works presented in the 1st Health Anthropology Meeting (Reunião de Antropologia da Saúde – RAS), which took place in October 2015 in the Federal University of Paraíba (UFPB). The editors of the publication seek to qualify the anthropological reflection of phenomena that relate to health and disease, but also bet on a dialogue that goes “beyond the walls of university”, involving health services, social movements and health management based on the Anthropology of Health. The chapters rely on authors who move transdisciplinarily through the areas of Collective Health and Social Sciences. Thus, the considerations and analyses proposed discuss the problems of the area of Health to understand the social contexts by exposing what “leaks” – which Bonet calls “remains” – in the scope of a prescriptive public health. As Minayo points out in the Preface, a closer look allows us to access the meanings of therapeutic mechanisms, relativize the biomedical logic and understand the meaning of health and disease. Therefore, if health is made by people, understanding how they think and what they do allows us to denaturalize interventions in health and even review the daily routine of health services, especially when it comes to the Unified Health System (Sistema Único de Saúde).

Both in the Introduction and in Chapter 1, Anthropology is presented as a strategic specialty in the analysis of the experience lived in health to access the processes of illness that involve suffering and affections. According to the authors, the study of these themes allows us to give visibility to several intricacies of the social reality, to connect people who want to reflect on these themes, as well as to carry out a research agenda that relates to the demands of administrators in order to think about effective change in health policies. Chapter 2 proposes a mapping, based on the anthropological reflection, of the existing scientific output in health and religion to elucidate the main approaches identified. They are: religious therapies, alternative and/or complementary therapies and traditional and/or popular therapies. According to the authors, this “division of competences” is detrimental to researches, given that studies on religious therapeutic assemblages should focus on the traces that cross subjectivities, bodies and worlds, and not on separating these dimensions to discuss health and religion.

Chapters 3 and 4 have common themes. While Melo seeks to understand the meanings and values of religious inspiration in the 12-Step Alcoholics Anonymous treatment model, through the so-called “sharing” of recovering addicts, Brunello starts his reflection from the meetings held in Alcoholics Anonymous and reaches the Street Offices (Consultórios de Rua) to analyze how care is understood in these services – which leads us to the conclusion that, by understanding what is at stake in the several services offered and in the logic of care in question 22. Mol A. The logic of care: health and the problem if patient choice . London: Routledge; 2008. , we can also understand what is perceived as a health issue. The two following chapters discuss health policies by showing the vast possibilities of Anthropology. Chapter 5 discusses the health conditions imposed by the Brazilian government for the access to the social welfare program Bolsa Família. These conditions end up favoring the work of health service professionals – instead of having to convince the population to take medical exams, it is enough to mention that, without them, there is no program benefits. However, in Chapter 6, what is at play is not the mapping of what is imposed by the government, but what evades the government’s vision, given that unsafe abortion is considered illegal. The authors researched the profile and motivations of women who have had this type of abortion in the state of Rio Grande do Norte. Corroborating previous researches 33. Diniz D, Medeiros M. Aborto no Brasil: uma perspectiva domiciliar com técnica de urna. Cien Saude Colet 2017; 22(2):653-660. , data showed that those who have abortions are usually common women, often married, with children and who make use of medication to induce the abortion. These women are educated and of different social classes and religions. The main motivations for the abortions are personal satisfaction and individual responsibility, limited income and marital violence.

The theme approached in the following chapters is HIV/Aids. Both in Chapter 7 and in Chapter 8, it is clear that health services have difficulty addressing prevention, treatment and continuity of care of affected patients. Maksud presents an analysis of four researches supervised and advised by her to reflect on the discourses that permeate health institutions in relation to HIV/Aids. Silva, on the other hand, focuses on the dynamics of serodiscordant couples in the face of high-risk situations, with the only option being the use of condoms in sexual relations. In these dynamics, couples do not condition their reproductive decisions to this risk, creating strategies to have sexual relations without the use of condoms, even if occasionally.

Another issue that is pertinent to the Anthropology of Health is the study of the construction of the biomedical discourse used in the name of science, which is also approached by other classical studies 44. Good B. How medicine constructs its objects. In: Good B. Medicine, Racionality and Experience. Cambridge: Cambridge University Press; 1994. p. 65-87. . In Chapter 9, the author looks for new meanings and understandings that permeate what is a “good” embryo based on images and scores created by health professionals to assess the quality of embryos used in the process of assisted reproduction. Following this same line of discussion, Chapter 10 presents a contrast between the concepts of ethics held by scientific institutions and by society when it comes to the care of people with rare diseases. Although these people have a right to medication, they have no access to it, given that there are not enough researches to confirm the efficiency of the medication and to make it available to the public through health policies. In this regard, the bureaucracy and lethargy of scientific institutions for the use of new drugs for rare diseases creates a stalemate in the name of science.

Health policies are defined from evidence-based medicine, which demands time, specific criteria and resources to reach a conclusion. Therefore, not all diseases are covered by the health policies available. Chapter 11 studies the bionetworks that are mobilized for the creation of public policies for people with sickle cell disease. Those involved accuse the lack of attention to this genetic disease as institutional racism, corresponding to another marker of the black population’s social inequality.

Chapter 12 presents the ambiguous perspective existent in the discourse of medical professionals on the subject of anabolic agents. When a patient is young and wants to change his or her body, the use of these agents is considered dangerous; however, when the patient is elderly, the use of this same substance is recommended to face the aging process. This discussion evidences moralizing aspects that are present in the prescription of anabolic agents to patients.

The Afterword, by Fleischer, presents a fictional dialogue between three characters who wait for medical attention in the waiting room of a health center, articulating the problems and understandings brought by previous chapters. Dynamically, the characters interact and present the intricacies of living with diseases and the types of care given by health services for their diagnosis and treatment. This effort in otherness by bringing the voice of users of these services presents us the completion of a work that resonates the urgency of a dialogue between the Humanities and Health Sciences to improve health care.

In short, this work stands out due to the contemporary issues it discusses, to the analytical and critical articulation of the actors involved in thinking and doing health and due to its accessible publication, promoted by the Brazilian Association of Anthropology (Associação Brasileira de Antropologia – ABA). As Knauth explains in the French fold of the book’s back cover, the authors who are part of this collection of articles are “new leaders” of the area who help to consolidate and reverberate the studies within the scope of the Anthropology of Health.