The trajectory of the Journal Ciência & Saúde Coletiva reveals a growing impact and credibility of the publication, which expanded its periodicity and consolidated itself as a benchmark in the discussion, implementation, and memory of Collective Health public policies and trends. Universal access and dissemination in digital media increased its outreach, both in search engines and social networks, bringing scientific knowledge to a broader audience.

If I could summarize the 25-year trajectory of Journal Ciência & Saúde Coletiva in one word, that would be “credibility”. The publication has lived up to what it proposed in its first editorial since inception in 1996: “to be an instrument for disseminating and critically reflecting the history and memory of the field, analyzing the ‘state of the art’ of its underpinning disciplines, the trends and prospects of thinking of Collective Health theories and practices...”. Ciência & Saúde Coletiva is today deservedly ranked among the three most prominent journals in Collective Health’s scientific universe11 Packer AL. Indicadores de centralidade nacional da pesquisa comunicada pelos periódicos de Saúde Coletiva editados no Brasil. Cien Saude Colet 2015; 20(7):1983-1995..

In a quarter of a century, the Journal has witnessed the Unified Health System’s implementation, the expansion of primary care, the return of controlled infectious diseases, the challenge of equity, and the Covid-19, unprecedented in the course of the last generations. The anniversary reminds us of the couples’ Silver Wedding celebration. The material chosen to symbolize the date is silver, as it is a precious, malleable, and long-lasting metal. In the era of instant success, liquid relationships, and volatile agreements, a publication achieving a 25th-anniversary mark deserves, at least, a reflection on the reason for its longevity.

The Journal was born in an intricate moment, marked by the beginning of the internet’s commercial exploitation in Brazil. At the turn of the century, the rapid advance of digital publications led to the belief that print publications were bound to become obsolete. However, Abrasco’s board decided to finance the Journal, considering that the Association had grown enough to have its vehicle, which would give visibility to the abundant scientific production in the field and scientifically subsidize the construction of the Brazilian Unified Health System (SUS).

From two annual issues, the Journal soon increased to four, six, and became a monthly publication in 2011. It increasingly gained more consistency and respect within the scientific community, with an appreciable number of publications. The timely dissemination, quality, and relevance of its papers, which currently total more than 3,500/year, account for its indexing in 23 national and international databases. SciELO, Medline, ISI/Thomson, and Scopus stand out among those with greater visibility.

Ciência & Saúde Coletiva have fulfilled the standardization requirements for scientific publication right from the first issue released, following the Vancouver Convention rules used in the fields of Medicine and Public Health. Compared to other journals in the field, its thematic nature is what makes it unique. In this context, it manages to diversify the contents, publishing papers on free themes, reviews or opinions, and interviews, letters, and critiques.

The Journal also ranks third regarding the impact factor measured by the JCR, among the 10 prominent national journals in the field of public health44 Minayo MCS, Gomes R, Silva AAM. Vitória da Revista Ciência & Saúde Coletiva da Abrasco. Cien Saude Colet 2019; 24(9):3176-3177.. Its commitment to research and scientific dissemination studies and preserving the documentary and physical heritage of these themes is notable. The awards are indicators that the seed planted back there has blossomed and continues to thrive, without losing consistency or giving up the flags in which it believes.

The Journal’s posture is one of the pillars of its success. It believes in equal opportunities by universalizing scientific knowledge, always fostering debate, and shedding light on decisive themes for the development of the field. Much of what has been thought and reflected in Brazilian and Global Collective Health has to do with what the Journal has published over the past two decades in these 25 years.

The plurality of content also deserves to be highlighted. In these 25 years, the Journal has had issues such as “Quality of Life and Health” (January 2000); “Humanization and Health Care” (March 2005); “Workers’ Health: old and new issues” (April 2005); “SUS in practice: advances and limits” (February 2007); “Genetics and Public Health” (January 2002).

Some issues were pioneered by the Journal, paving the way for discussions on new policies, such as “Men’s Health” (January 2005). The Journal did not shy away from bringing on taboo cover themes, such as “Abortion: a relevant banned theme” (July 2012) and “Brazilian Older Adult’s Suicide” (August 2012). The Journal has always sought new angles for old issues such as violence, occupational health, obesity, alcoholism, disability, mental health, and access to medicines, fulfilling its mission of proposing and influencing health policies, evaluating policies and services, and sector financing.

In 2020, marked by the Covid-19 pandemic, the Journal launched two thematic editions: Covid-19: the pandemic that overturned the world (Supplement 1 - June/2020) and What Covid-19 reveals and hides (Supplement 2 - October/2020), facilitating access to relevant literature for research on Covid-19. Fake news more widespread on Brazilian social networks during the pandemic was the subject of a survey in an article entitled “Fact or Fake? An analysis of disinformation in the face of the Covid-19 pandemic in Brazil”55 Galhardi CP, Freire NP, Minayo MCS, Fagundes MCM. Fato ou Fake? Uma análise da desinformação frente à pandemia da Covid-19 no Brasil. Cien Saude Colet 2020; 25(Supl. 2):4201-4210..

Always updating itself, the Journal was swift to invest in digital technology. Besides its outreach at Google Scholar, it has been popularizing scientific knowledge for an expanded audience on social networks. The Journal Ciência & Saúde Coletiva allows access to all its content on Facebook, Instagram, and Twitter, complying with one of its great principles: mainstreaming and facilitating scientific production access.

Mainstreaming access to information has been one of the Journal’s flags since inception, providing “open access” to the full content. All readers have free access to the texts, in PDF, which can be downloaded on the SciELO Portal (www.scielo.org) and its home page (www.cienciaesaudecoletiva.com.br) by clicking on issues.

Metrics bring good news on social media. An analysis of publications from September 2019 to August 2020 shows that almost 600 thousand prints of the Journal’s publications were registered on Facebook by the end of August, an average of 49 thousand monthly prints (Graph 1).

With 6,000 followers on Facebook, the user base has been growing by an average of 84 new page likes/month. One of the publications that engaged the most was an anniversary post from the SUS on September 19, 2019. The post organically reached over 100 thousand users, resulting in 500 followers in just one day.

The publication of the paper “The Covid-19 pandemic beyond the Health Sciences” on the pandemic’s historical and social foundations reached more than 7,000 users. It was the one with the most significant outreach in the period, with no paid boost (Figure 1). Both examples suggest that celebrations and current events can generate engagement and sharing and can be worked on accordingly.

The January 2020 edition on Health and Work Systems: Nursing Challenges was the most liked on Instagram, with 176 likes and 33,099 people outreach (Figure 2). It is a relevant social network in which the Journal has invested in the right direction, to increase the number of followers, which until August totaled just over 2,600. On Instagram, Health Tips posts are among those generating the highest engagement.

Unlike other networks, Twitter considers engagement all interactions with the post or profile. The number of prints stands out in the period when the analysis of the posts was made: about 53 thousand, an average of 5.2 thousand per month. The peak of engagement follows the prints and specific posts about the Blood Donor Day (November 25, 2019), release the Journal Ciência & Saúde Coletiva has subsidized the construction of the SUS for 25 years (March 27, 2020) and Alma-Ata’s 40 th anniversary (May 5, 2020) (Graph 2 and 3).

Concerning the Journal’s audience profile on social networks, most are women, both on Facebook (75%), aged between 25 and 34, and Instagram (76%), with a broader age range, ranging from 18 to 44 years. The educational level is high: 33% of the followers of the networks claim to have postgraduate degrees, a percentage above average on Facebook, leading to the conclusion that the audience of social networks is the target audience of the Journal.

Despite challenges, such as increasing the number of users and followers on social networks, Ciência & Saúde Coletiva has much to celebrate. I am honored to collaborate with volume 25 on the occasion of the 25th anniversary. After all, the Journal receives over 3,000 original papers annually, of which, on average, 20% are approved, showing the rigor of the evaluations.

With themes that echo Abrasco’s philosophical and political principles, the publication has supported the debate about the implementation of SUS policies. In a pandemic year, in which science and health were at the center of the debate in the public sphere, I would like to congratulate the team that maintains the high level of the Journal’s publications.

It is time to look at the rear-view mirror, recognize and validate the trodden path, and turn our eyes to the future and continue improving and promoting free access to scientific information. The 25-year legacy of Ciência & Saúde Coletiva is one of reflection, text quality, information, and intellectual development. This is also the role of the press, which the Journal performs with distinction. 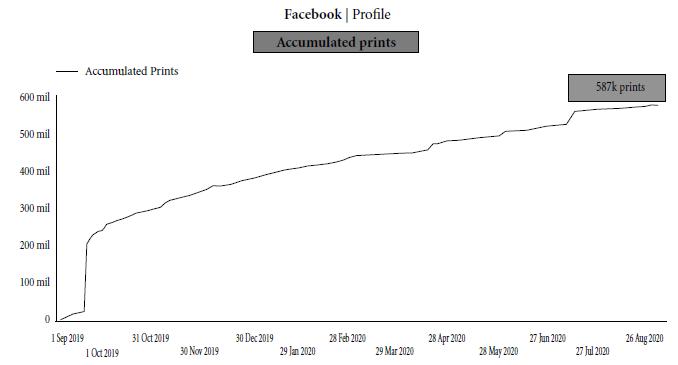 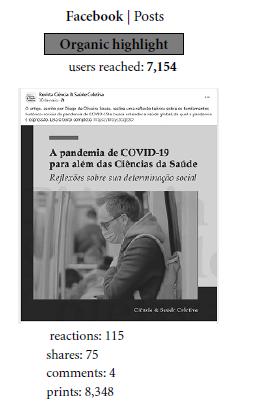 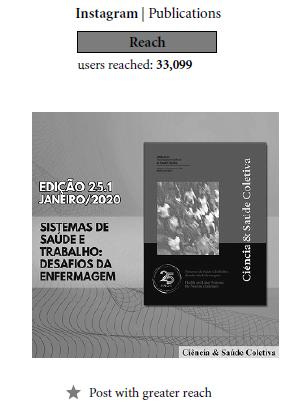 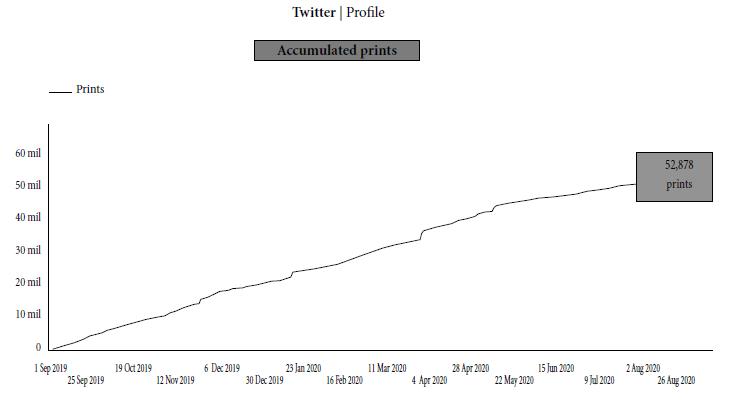 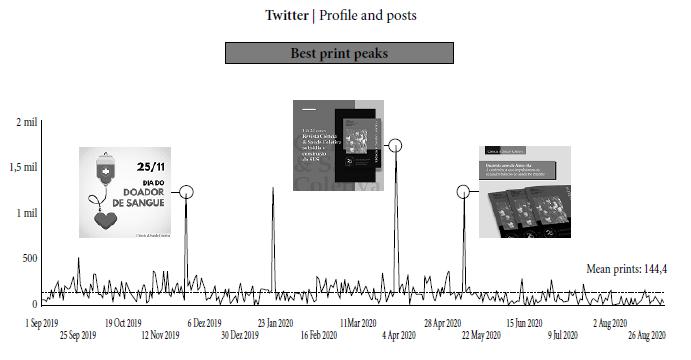