In Argentina the first case of the epidemic of Covid-19 was reported on March 3, 2020. As the WHO declared the disease as pandemic by March 11, 2020, health authorities decided to pose a mandatory lockdown since March 20, 2020 in order to prevent rapid propagation of infections and prepare the expansion of health infrastructure. After April 6, 2020, the government adopted a sequential easing of movements for selected economic activities combined with social distance measures, such as wearing masks and preserve the required distance between people.

Even though it is known that isolation and interventions that limit population movements and contacts curb the spread, health authorities still do not know how the virus is spreading within the national borders and in specific territories, like towns, cities or densely populated areas. Also, as testing is limited, the proportion of asymptomatic is not known, nor if contagion takes place during the pre-symptomatic phase of the disease. Besides the basic figures about confirmed cases, recovered or deaths, the development of local epidemiological indicators is still weak. In infectious diseases, one of the key indicators is the serial interval (SI from now on), defined as the time from illness onset in infector (index or primary case) to illness onset in infectee (secondary case). This indicator contributes to the understanding of the transmissibility of the disease11 Fine PEM. The interval between successive cases of an infectious disease. Am J Epidem 2003; 158(11):1039-1047.. Actually the SI is widely used to compute the effective reproductive number, that is the average number of secondary infections caused by each infector22 Wallinga J, Lipstich M. How generation intervals shape the relationship between growth rates and reproductive numbers. Proc Biol Sci 2007; 274:599-604.. Estimates of the SI can only be obtained by linking the dates of illness onset between infector-infectee pairs. Thus, the main source of information emerges from clusters of infections.

Up to date, available figures of SI for Covid-19 come from a few regions, the majority belonging to regions with an early outbreak (Table 1). As was pointed out33 Peak C, Kahn R Grad Y, Childs L, Li R, Lipsicth M, Buckee CO. Individual quarantine versus active monitoring of contacts for the mitigation of Covid-19: a modelling study. Lancet Inf Dis 2020; S1473-3099(20)30361-3., more data about the serial interval is needed to evaluate interventions (contact tracing, selective quarantines, etc). If SI is overestimated quarantine interventions may be excessive. On the contrary, if SI is underestimated, interventions may be insufficient to curb the spread. At the same time, if SI is relatively short, symptomatic cases will emerge rapidly and health authorities will need to focus efforts in testing infrastructure and coordination. If SI takes longer it may be a signal of low asymptomatic transmission and less pressure on testing inputs.

Considering the incubation period, if transmission occurs mainly in the households the date of exposition is uncertain and restricts the estimations. Only 6 empirical studies provide figures about the time since exposition to illness onset (Table 2).

Between March 20, 2020 and May 8, 2020 36 cases were reported as positive for SARS-Cov-2 in Bahia Blanca city (Argentina). Local health authorities collected the date of illness onset and the date of exposure of each patient. As most of them emerged in clustered transmission it was possible to identify the infector-infectee pair in the chain.

In most pairs (70%), the infection is part of hospital staff and contracted the disease in the workplace, in close contact with patients. For some of them (4 cases) the infector could not be clearly identified as more than one patient could have transmitted the virus. In those cases, we assigned the infector as the one exhibiting the closest period with the infectee´s illness onset. For that reason, we split the sample of pairs between certain and probable observations1010 Nishiura H, Linton N, Akhmetzhanov A. Serial interval of novel coronavirus (COVID 19) infections. Int J Inf Dis 2020; 93:284-286.. The subsample of certain pairs has 17 observations.

We also estimate the mean SI from the sample of patients assuming uncertainty in probable dates of symptom onset. This requires a Bayesian approach, based on a numerical technique known as Markov Chain Monte Carlo (mcmc). This procedure estimates a posterior sample of SI distribution, which is a kind of average between prior beliefs of the distribution (e.g. Gamma) and observed data. The Bayesian approach can be more accurate in diseases with less known dynamics, like Covid-19.

Figure 1 exhibits the chain of contagion (2 imported cases and 18 local transmission cases). The rest of 13 imported cases did not transmitted the virus locally. Until the cut-off date all infectors were recovered. For this reason, we assume no right censoring in the data.

In the sample of 17 infectee-infector pairs we found that 2 patients became infected during pre-symptomatic phase as their infector manifested symptoms after the exposition. Also, in the sample of cases with incubation dates, 1 case got infected from an asymptomatic infectious. Together, taking the proportion of transmission before symptom onset or from asymptomatic cases is 17%.

As the number of observations is modest and parametric estimation methods have asymptotic properties, we also checked the results with bootstrapping techniques (Chart 1).

Thumbnail
Table 3
Incubation and serial interval in a sample of symptomatic infections.

In addition, 97.5% of symptomatic cases will develop symptoms before 13/14 days from exposition. Taking into account the results of the reduce sample of 12 cases, the upper limit of confidence interval increases to 17 days. These estimations are useful to decide the extent of quarantine in exposed individuals.

We found no substantive differences in the mean between the point estimations of parametric and Bayesian methods and also considering bootstrapping. Nevertheless, Bayesian methods show higher mean and median for the SI in the reduced sample than the ones estimated without uncertainty. This finding narrows the gap between the SI and the incubation period.

Figure 2 plots the histogram of observations and fitted distributions. Estimations show better adjustment of observed data for the SI than for the incubation period.

On the other hand, own estimations show that some extreme cases may develop symptoms in 17 days. This implies that isolation measures for suspicious cases (close contacts of positive cases) of 2 weeks may be insufficient. Rather, 2.5 weeks could be a more precautionary isolation measure.

The estimations for the serial interval of Covid-19 suggest that symptom onset may take longer time to emerge between infectious, enlarging the effective reproductive number (conditional to the rate of growth of cases). Nonetheless, local SI figures seem quite close to the ones reported for Lombardy (Italy).

The gap between the incubation period and the SI seems similar than the one estimated in foreign regions; presymptomatic transmission can occur between 1 or 2 days before symptom onset. That highlights the importance of contact tracing and timely isolation measures of patients’ close contacts.

The present study has some limitations. First, from the first 36 cases 33% of symptomatic cases are hospital staff for whom contagion is clearly during the symptomatic phase and not before. If transmission takes place anywhere (beyond the household or closed places), pre-symptomatic contagion could be higher than estimated one. 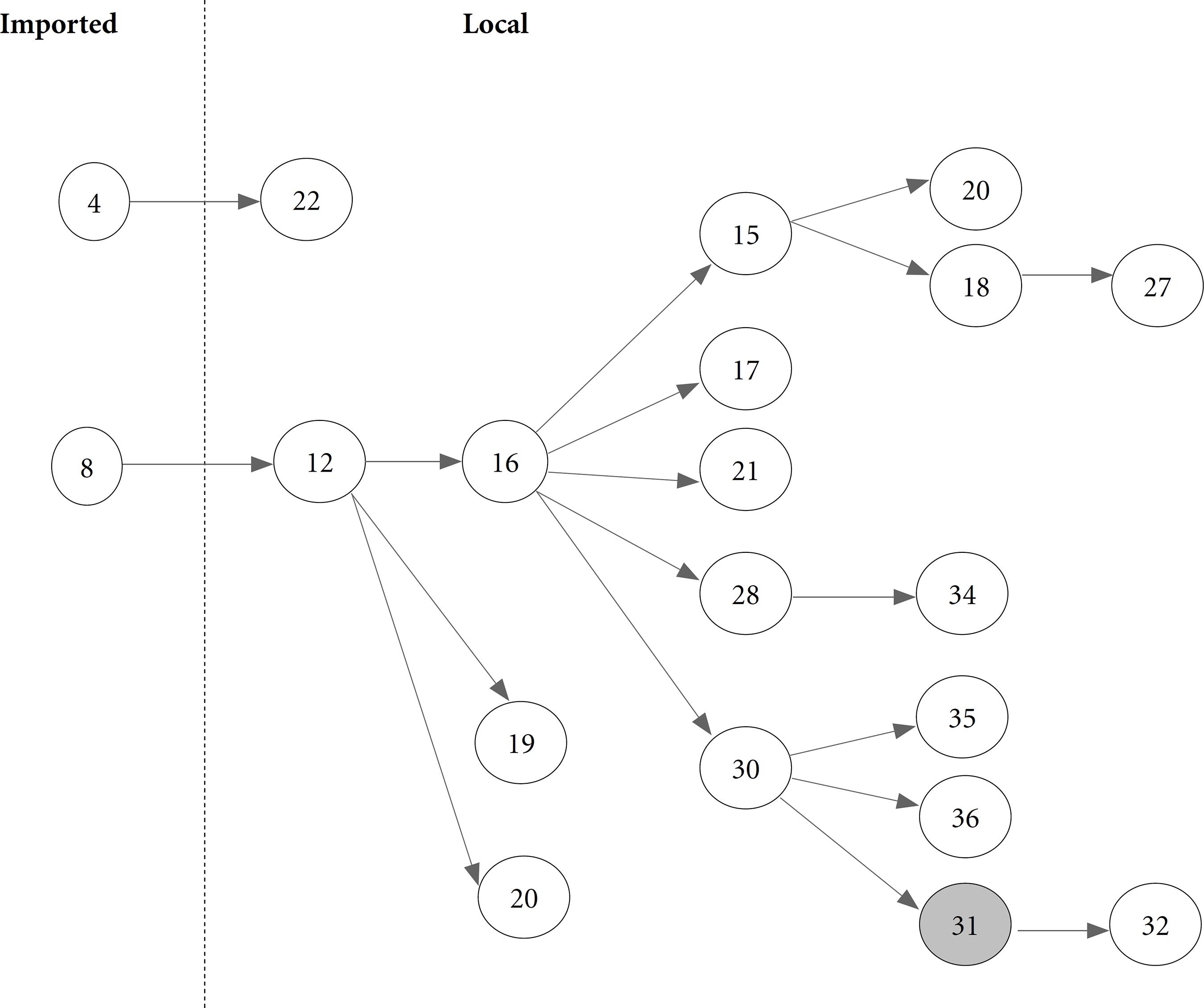 Source: own elaboration. The grey circle represents an asymptomatic case up to data cut-off. 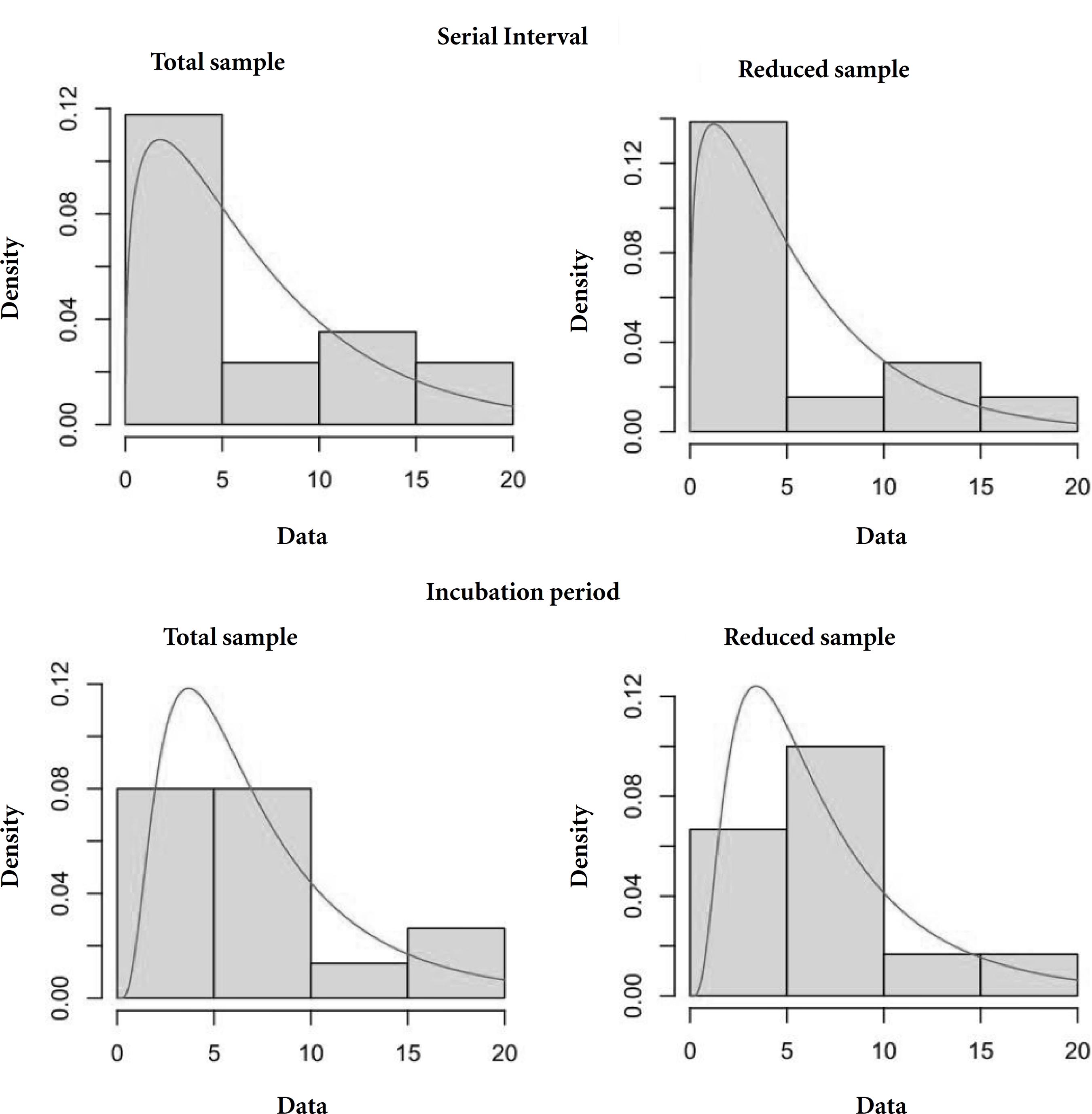 Source: own based of references.

Source: own based on references.

Table 3   Incubation and serial interval in a sample of symptomatic infections.