Mortality statistics due to COVID-19 worldwide are compared, by adjusting for the size of the population and the stage of the pandemic. Data from the European Centre for Disease Control and Prevention, and Our World in Data websites were used. Analyses are based on number of deaths per one million inhabitants. In order to account for the stage of the pandemic, the baseline date was defined as the day in which the 10th death was reported. The analyses included 78 countries and territories which reported 10 or more deaths by April 9. On day 10, India had 0.06 deaths per million, Belgium had 30.46 and San Marino 618.78. On day 20, India had 0.27 deaths per million, China had 0.71 and Spain 139.62. On day 30, four Asian countries had the lowest mortality figures, whereas eight European countries had the highest ones. In Italy and Spain, mortality on day 40 was greater than 250 per million, whereas in China and South Korea, mortality was below 4 per million. Mortality on day 10 was moderately correlated with life expectancy, but not with population density. Asian countries presented much lower mortality figures as compared to European ones. Life expectancy was found to be correlated with mortality.

COVID-19, the disease produced by the SARS-CoV-2 virus, was first reported in China in late 2019. After being declared by the World Health Organization as an international health emergency on January 30, 2020, COVID-19 was declared pandemic on March 11, 202011 World Health Organization (WHO). Coronavirus disease (COVID-19) Pandemic. [cited 2020 Abr 15]. Available from: https://www.who.int/emergencies/diseases/novel-coronavirus-2019
https://www.who.int/emergencies/diseases... . Less than six months after the first case, over 150,000 people died around the world (as of April 18, 2020). In a single day (April 16, 2020), almost 5,000 people lost their lives in the United States due to COVID-1922 Our World in Data. Roser M, Ritchie H, Ortiz-Ospina E, Hasell J. Statistics and Research. Coronavirus Disease (COVID-19). [cited 2020 Abr 15]. Available from: https://ourworldindata.org/coronavirus
https://ourworldindata.org/coronavirus... .

Official statistics on deaths represent a much more reliable platform to understand the dynamics of COVID-19. In this article, we compare mortality statistics due to COVID-19 worldwide, by adjusting for the size of the population and the stage of the pandemic in each country. We also present the correlation between mortality and (a) life expectancy; (b) population density. By using these methods, we disentangle misinterpretation and fake news from scientific evidence.

Data used in this analysis are freely available at the European Centre for Disease Control and Prevention, and the Our World in Data websites. All analyses are based on number of deaths per one million inhabitants. In order to take into account the stage of the pandemic, the baseline date for each country was set as the day in which the 10th death was reported in that particular country. Mortality statistics are presented for days 10, 20, 30 and 40 since the 10th death.

We also obtained freely available statistics from the United Nations on life expectancy, and from the World Bank on population density. Life expectancy data were not available for Puerto Rico and San Marino, and therefore, we obtained them from different sources (Puerto Rico: Statista.com; San Marino: Indexmundi.com). We plotted mortality on day 10 since the 10th death in each country with (a) life expectancy; and (b) population density, as well as calculated Spearman's correlation coefficients (rho).

Table 1 lists the 78 countries and territories included in the analysis by alphabetical order. The mortality variation was remarkably high: on day 10 since the 10th death, 17 countries (21.8%) presented mortality below one per million, and 19 (24.4%) above 10 per million. Numbers were extremely high in two small areas: San Marino, with a population of 33.8 thousand inhabitants presented a mortality of 618.78 per million. In Andorra, with a population of 77.0 thousand people, mortality on day 10 since the 10th death was 336.50 per million.

Thumbnail
Table 1
Mortality per one million inhabitants on days 10, 20, 30 and 40 since the 10th death (baseline) in each country.

For 48 countries and territories, information on mortality on day 20 since the 10th death was available. Only China, India, Indonesia, Japan and Pakistan had a mortality below one per million inhabitants on day 20. More than half of the countries (54.2%) presented mortality figures on day 20 above 10 per million. The highest values were found in Europe: Luxembourg (110.23 per million), Spain (139.62 per million), Belgium (175.59 per million), and San Marino (942.90 per million).

Although the absolute number of deaths in San Marino on April 18, 2020 (N = 39) might appear low, it represents 0.12% of its entire population. Would this catastrophic figure of 0.12% happen in other places, it would represent millions of deaths in populous countries, such as China, India, United States, Indonesia, Pakistan, Brazil, Nigeria, Bangladesh, Mexico and Japan.

The six countries which achieved day 40 since the 10th death showed remarkable differences in mortality (Figure 1). In both Italy and Spain, mortality was greater than 250 per million, whereas in China and South Korea, mortality was below 4 per million. Iran (41.10 per million) and the United States (71.45 per million) presented intermediate values.

Thumbnail
Figure 1
Mortality (deaths per one million people) on day 40 since the 10 th death.

In Figure 2, we compare mortality per million figures on days 10, 20 and 30 for the 16 countries with data, except San Marino. Belgium and Spain presented similar curves, but from day 20 to 30, the difference became larger. United Kingdom and Netherlands came next, with the difference that from day 20 to 30, the increase was much larger in the United Kingdom. Curves for the Asian countries were similar, with mortality figures much lower as compared to those observed in European countries or the United States.

Thumbnail
Figure 3
Scatter plot of life expectancy (years) and mortality on day 10 since the 10 th death.

Two issues that are easily depicted by scientists should be widely disseminated to the public and to politicians, to avoid misinterpretation and misguided policies. First, analyzing the absolute number of deaths is misleading. For example, as of April 18, 2020, China ranks 7th in the absolute number of deaths. However, when adjusting for its population, there are around 80 countries and territories with higher mortality rates per million, as compared to China. Second, adjusting for the stage of the pandemic in each setting is also essential to correctly interpreting COVID-19 statistics. In this article, we opted to take the date of the 10th death as the baseline figure. Again, ignoring this figure would lead to biased conclusions. For example, when comparing Italy and Spain only, mortality figures were higher in Italy than in Spain until April 5, 2020 if we ignore the stage of the pandemic in each country. However, the 10th death in Italy took place on February 26, whereas it happened on March 10 in Spain. When we adjust for the stage of the pandemic, figures were higher in Spain than in Italy all the time (10.10 vs. 3.26 per million, respectively, on day 10; 58.52 vs. 35.69 per million, respectively, on day 20; and 138.62 vs. 135.04 per million, respectively, on day 30).

On one hand, we found life expectancy to be moderately correlated with mortality. This finding is in accordance with previous studies showing increasing fatality rates with increasing age22 Our World in Data. Roser M, Ritchie H, Ortiz-Ospina E, Hasell J. Statistics and Research. Coronavirus Disease (COVID-19). [cited 2020 Abr 15]. Available from: https://ourworldindata.org/coronavirus
https://ourworldindata.org/coronavirus... . On the other hand, we found no evidence of an ecological association between mortality and population density, despite the fact that the highest mortality figures on day 10 since the 10th death were observed in two small areas (San Marino and Andorra).

In conclusion, Asian countries presented much lower mortality figures as compared to European ones. Although life expectancy was correlated with mortality, its correlation with mortality was just moderate, so that there are other factors contributing to these differences. Likely explanations are the implementation and adherence to social distancing measures, testing policies and health system structures.

To Aline E. Lamas, who helped collect the data, fill the spreadsheets and search for data.

Figure 1   Mortality (deaths per one million people) on day 40 since the 10 th death. 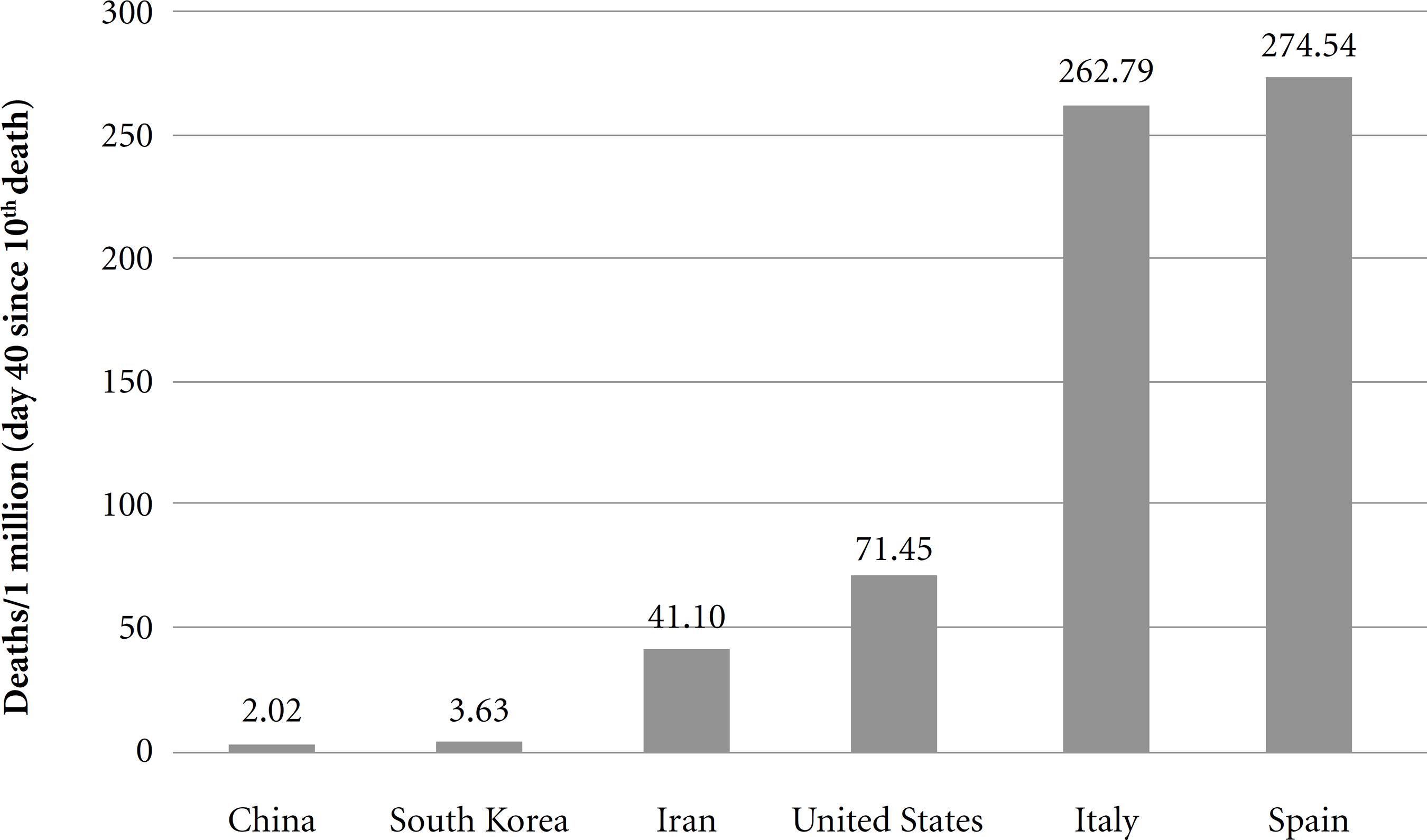 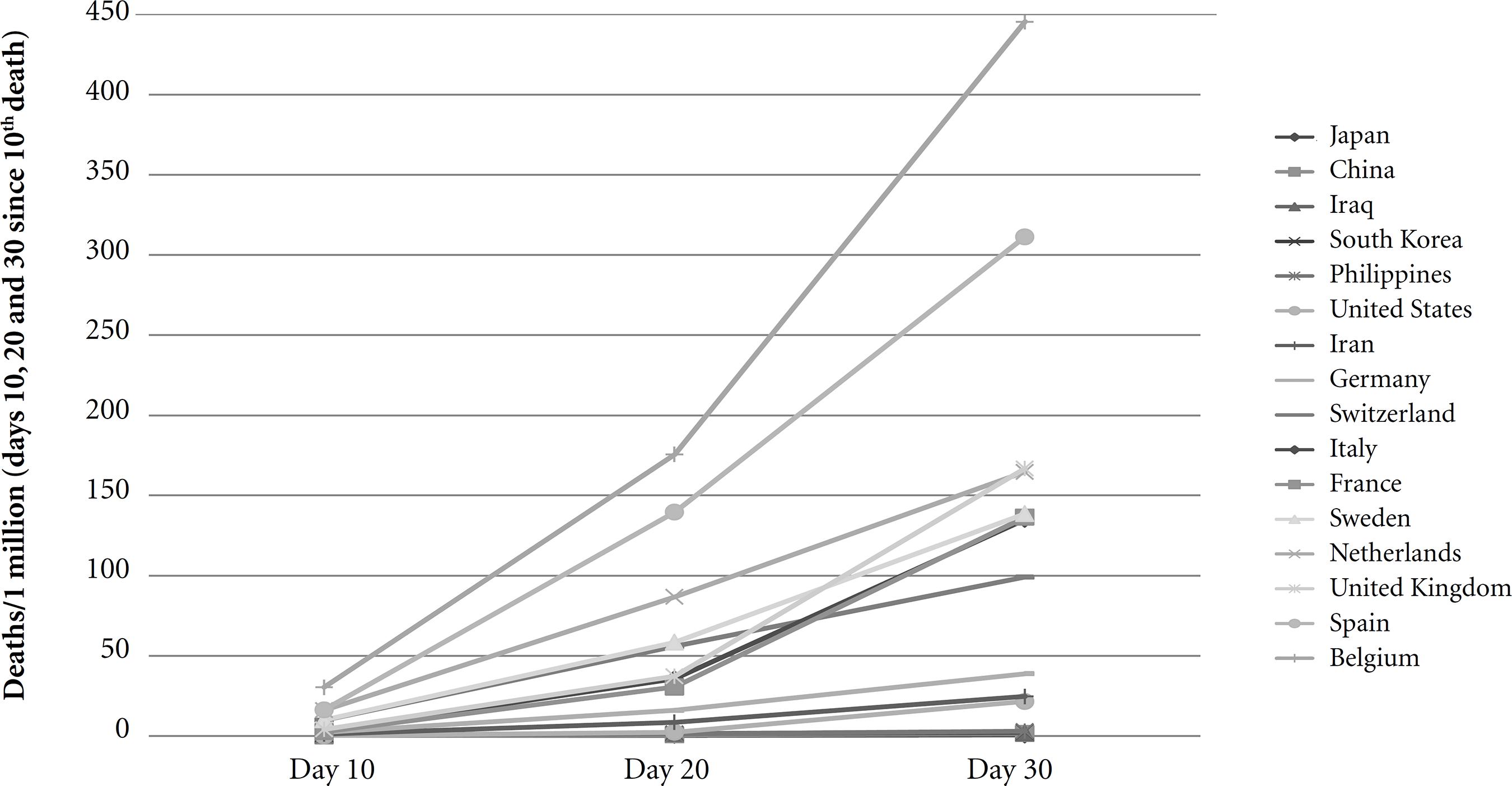 Figure 3   Scatter plot of life expectancy (years) and mortality on day 10 since the 10 th death. 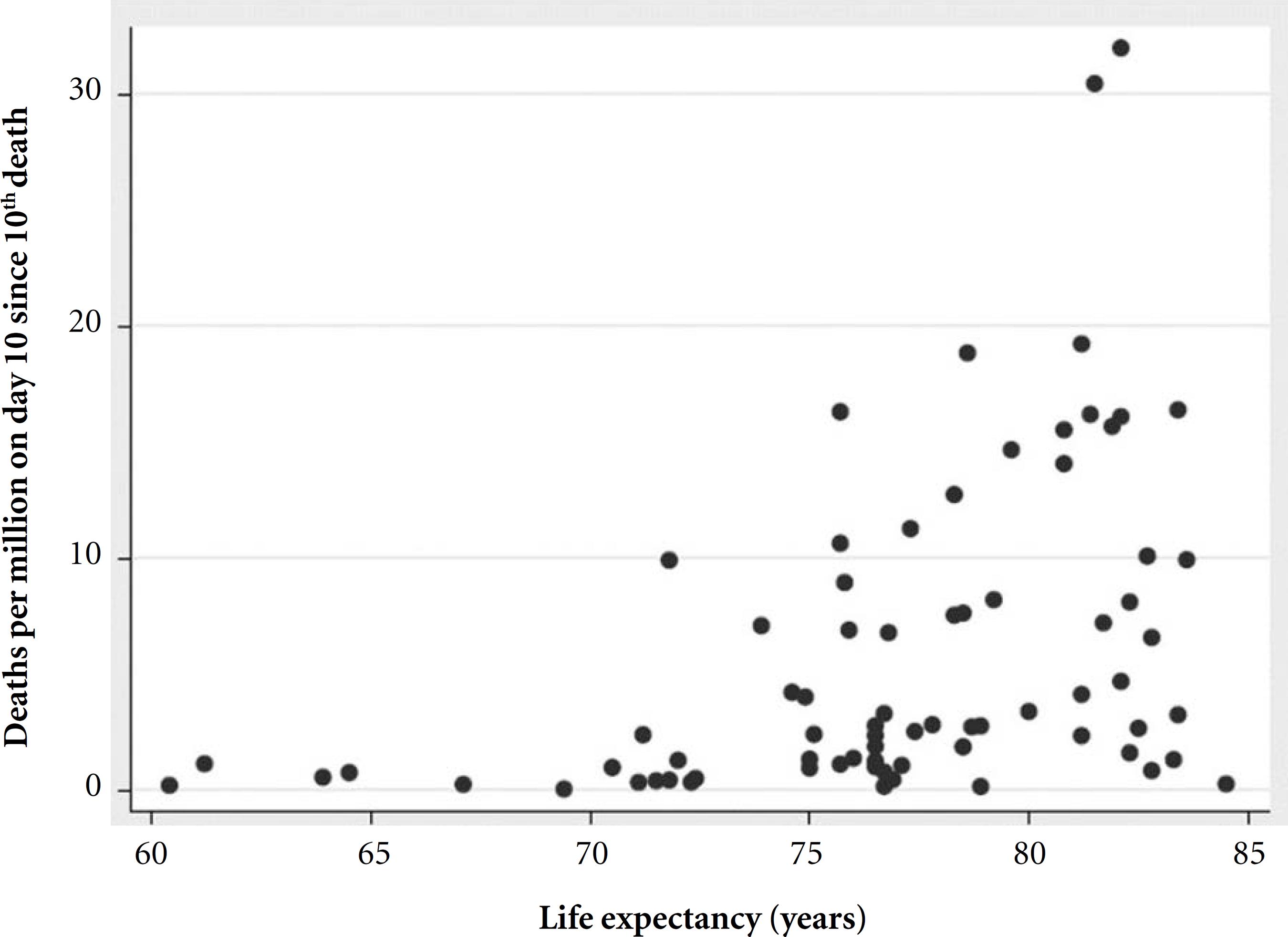