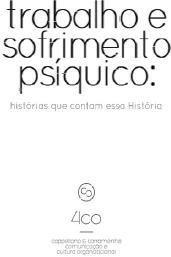 The book makes a precise and at the same time discouraging radiography of the process of workers’ social marginalization, who are hostages to the increasingly demanding and excluding labor market. The neoliberal reforms initiated in the 1990s led to a progressive decline of occupations and to a deepening of social inequality in the country. In the current scenario, 12% of the EAP is idle and the service sector concentrates 62.7% of the jobs in the market11 Pochmann M. Tendências estruturais do mundo do trabalho no Brasil. Cien Saude Colet 2020; 25(1):89-99..

The world of work is not favorable to the work and stability in employment. The globalization process and the new technologies have led to productive restructuring and job losses. Moreover, Brazil has followed the global trend of deregulation of social rights and of a greater weakening of the conditions under which work is carried out.

In this context, the originality of this book is the adoption by the authors of the IBGE classification as a criterion for choosing the research participants. According to the type of work contract and absorption in the labor market, workers were segmented into formally employed (public servers and workers hired under employment laws), self-employed (independent professionals and freelancers), informal workers, and the unemployed and discouraged. Among the formally employed workers on medical leave are also identified. However, even before they fall ill and move away from work, what is observed is that the workers are suffering, some more, others less, due to unemployment and to the new demands of the job.

Structural unemployment and the fear of losing the job in those who are employed, albeit precariously, trigger a lot of psychological suffering in the workers. The sense of “suffering” used by the authors has as theoretical reference the concepts by Dejours in the study of the Psychopathology of Work22 Dejours C. A loucura do trabalho: estudo de psicopatologia do trabalho. São Paulo: Cortez-Oboré; 1987. and the Psychodynamics of Work33 Dejours C, Abdoucheli E, Jayet C. Psicodinâmica do Trabalho. São Paulo: Atlas; 1994.. The extended case study method and the quantitative-qualitative approach used in the research analyzed the testimonials of 80 people from 25 focus groups and 754 answers to an online questionnaire. The authors deciphered the difficulties of these subjects in establishing forms of resistance to illness, either through the relations among the colleagues and in developing defensive strategies of workgroups or in recognizing themselves or being recognized in a work which makes sense and fulfills.

The testimonials express certain naturalization of injustice in work relations and in the breaking of relations among the colleagues. The Trivialization of Social Injustice44 Dejours C. A Banalização da Injustiça Social. Rio de Janeiro: Editora FGV; 2000. is a reality in today’s increasingly competitive world of work, where lack of solidarity among co-workers and the harassing management practices of the organizations are passively accepted. The workers endure suffering as a means of survival, in a process of consented submission. Stress, backache, and anxiety were reported by 75% of the patients. If there were a choice, only 39% would remain in their current activities.

The authors identified different forms of labor force struggle for survival in this system, typifying as “winners” and “heroes” (those with greater work stability), and as “warriors” and “survivors” (those with less stability). As for the individuals who were on leave, unemployed, and discouraged, they were grouped as “wounded”.

In the focus groups and individual interviews, five categories of analysis emerged: “Work is always violence”; “The labor market does not know what it wants”; “Suffering comes from above”; “Income matters, health access enslaves and idleness frees”, and “The (no) future of (no) work”.

“Work is always violence” and it should not be so. Decent and proper work, in addition to providing welfare, must make it possible to exercise subjectivity and, in this sense, can be a source of pleasure and contribute to the identity of workers33 Dejours C, Abdoucheli E, Jayet C. Psicodinâmica do Trabalho. São Paulo: Atlas; 1994.. However, the interviewees reported “doing anything” to keep their jobs, by family imposition and for livelihood, even if it generates suffering. For the wounded, absence from work is seen with suspicion by management and co-workers. The unemployed need to demonstrate to friends and family that they are continually looking for work, regardless of whether it is satisfactory or compatible with the professional qualification. The discouraged are not allowed to give up. Survivors, as they still work informally, are also demanded for the domestic activities. On the other hand, the warriors, outsourced or not, administrative or production workers, need to extend their working hours to meet the expectations of managers and relatives. The winners, in turn, workers in executive positions, also suffer when they have to fire their subordinates and justify the attitudes in favor of the survival of the organization.

“The labor market does not know what it wants” because, in addition to the growing demands for qualification, prior experience, the analysis of the position held and the salary of the last job are required. The wage and functional downgrading of those seeking professional relocation is proportional to the time of unemployment. Professional devaluation also affects liberal and self-employed professionals. The authors reported difficulties in including black women in leadership positions in the sample. Some reports also highlight the greater difficulty of job relocation associated with race and gender. The perception that work makes people sick and that, if they could they would change jobs, was higher among black women (85%). Those who remain in employment need to demonstrate commitment and subservience to the “values” of the company, even if they do not believe in the speeches of meritocracy.

“Suffering comes from above”. For some, the boss is the tormentor. For others, the system and the government are to blame. In fact, the narratives express the harassing and professional devaluation practices perpetrated by the leaderships. However, the leaders feel they are victims of their superiors, in a cascading harassment process, characterized by organizational bullying. The accountability for the increasingly exclusionary capitalist system is consensual in the testimonials. People’s resignation to adversity and the lack of social protection policies and of employment and income retro-feed a sense of social injustice.

“Income matters, health access enslaves and idleness frees”. The “discipline of hunger” or working to survive, even if this work causes suffering, is the justification of most of the wounded, the survivors and the warriors who expose themselves to risks and submit to humiliations without offering resistance. In “On the edge of slavery”, they report 12 or 14 hours a day of work, sleepless nights, and weekends working. Besides income, the fear for most formal workers is losing the supplementary health plan and the condition of being insured by Social Security. Currently, about 60% of the EAP is exclusively SUS dependents and have no social insurance, either in the form of unemployment insurance or of social security benefits. In this group that includes the survivors, the anguish of income is more intense because they suffer from a constant back and forth from employment to unemployment.

Among the considered winners, executives and small business owners, the fear of losing their jobs or the failure of their own business flirts with the loss of social status. For this group, unemployment is a failure and they have reported that some colleagues have committed suicide in this condition. On the other hand, contradictorily, the period when they got unemployed made it possible for some to reflect that there is life beyond work.

“The (no) future of (no) work”. In the testimonies, “Having a job is having dignity” and a hope that the future will not repeat the past. “Without work, you do not eat, do not dress, do not get a home.” A research by the IBGE55 Instituto Brasileiro de Geografia e Estatística (IBGE). Desemprego cai para 11,8% com informalidade atingindo maior nível da série histórica [Internet]. 2019 [acessado 2020 Mar 14]. Disponível em: https://agenciadenoticias.ibge.gov.br/agencia-noticias/2012-agencia-de-noticias/noticias/25534-desemprego-cai-para-11-8-com-informalidade-atingindo-maior-nivel-da-serie-historica
https://agenciadenoticias.ibge.gov.br/ag... points to 27.8 million people not working or working less than they would like to. Among the occupied, 41.4% worked informally.

For most of those interviewed, the meaning of work is perceived in their subjectivity as an activity inherent to life and synonymous with their own identity. However, all have shown themselves to be disconnected from the social issues and the rights associated with work, the future of work, and with the negative impact of the new technologies on job creation and the capacity to absorb increasingly qualified labor. Work has become painful for an increasingly part of the workers who report the “use of psychotropic drugs to sleep and put up with the next day”, or who move away with mental disorders. Women and black women who are discriminated against and the unemployed individuals suffer even more, without a minimum income to survive and feel worthy. If we deny our own suffering, we deny the suffering of others and thus trivialize social injustice44 Dejours C. A Banalização da Injustiça Social. Rio de Janeiro: Editora FGV; 2000.. More than an individual situation, suffering at work and outside it is a collective problem and requires the mobilization of the whole society. Although in a fragmented way, this book points out the dimension of the inequities of work in the country.