Prescribing potentially inappropriate medications for the elderly according to Beers Criteria: systematic review

The study aimed to perform a systematic review to identify and evaluate the prevalence of potentially inappropriate medicines (PIM) prescriptions for the elderly, according to Beers Criteria, in hospitalized elderly individuals aged 65 years or older. Five databases consulted: VHL; Cochrane Library; CINAHL; MEDLINE and Web of Science. Nineteen articles identified, selected based on eligibility criteria. The mean age was 78.2 years and the most used criterion for the identification of PIM for the elderly was Beers 2015 (57.9%). A total of 221,879 elderly received a prescription for PIM, the mean prevalence was 65.0%, for the gastrointestinal system (15.3%) and proton-pump inhibitors (27.7%) highlighted as the main class of medicine prescribed. It concluded that the Beers Criteria have made it possible to identify the high prevalence in the prescription of PIM. The results of this review may help in the decision making of health professionals, to avoid the administration of PIM and to propose best practices to ensure the safety of the elderly hospitalized.

Scientific evidence, based on studies conducted using standardized methods19 and using explicit criteria for evaluating drug therapy for the elderly, is fundamental to improve the selection of medications; educate health professionals and patients; reduce adverse events; and serve as a tool to assess the quality of care, costs and patterns of medication use in older adults1818 American Geriatrics Society 2015 Beers Criteria Update Expert Panel. American Geriatrics Society 2015 Updated Beers Criteria for Potentially Inappropriate Medication Use in Older Adults. J Am Geriatr Soc 2015; 63(11):2227-2246.. In the current literature, none systematic review on the use of PIM in the hospitalized elderly population that used the Beers criteria was identified. In this sense, the aim of this study was to conduct a systematic review to identify and evaluate the prevalence of PIM prescription, according to the Beers Criteria, in elderly hospitalized at ≥65 years.

A specific protocol was designed by the researchers to structure the systematic review and registered in PROSPERO, available in: http://www.crd.york.ac.uk/prospero/display_record.php?ID=CRD42019133367. The protocol included the stages of defining the theme and preparing the research question, “What is the prevalence of PIM prescription, according to the Beers Criteria, in hospitalized elderly aged ≥65 years?”; preparation of eligibility, inclusion and exclusion criteria for studies; survey of publications in databases; categorization and analysis of the information found in the publications and descriptive evaluation of the selected studies.

The following combination of descriptors (MeSH) in English was used to conduct the search in the MEDLINE database, as well as in the other databases, with minor adaptations, according to their specificities: (“Beers Criteria”) and (“Potentially Inappropriate Medication List”) and (“Beers Potentially Prescribing”) and (“Beers Potentially Criteria” or “Beers Criteria of,” or “Beers Inappropriate Medications”), with the date limits [01/02/2012 to 31/05/2019]. A librarian was consulted to promote rigor in the search process. Five databases used: Virtual Health Library of the Ministry of Health (VHL/MS); Cochrane Library; Cumulative Index to Nursing & Allied Health Literature (CINAHL); Medical Literature Analysis and Retrieval System Online (MEDLINE) and Web of Science. The search for the studies was conducted in the month of May 2019.

The eligibility criteria were observational and experimental studies, conducted between 2012 and 2019; patients aged ≥65 years hospitalized in hospitals; studies that analyzed drug prescriptions using the Beers Criteria in the 2012 or 2015 versions, without language restriction. Abstracts of conference articles, theses and dissertations and studies that included joint data analysis with more than one criterion for the evaluation of PIM was excluded. The 2019 update of the Beers Criteria was not included due to its recent publication and lack of published studies with its application.

The studies were selected following two steps. First, two trained reviewers (R1 and R2) read and evaluated independently the titles and abstracts of the articles identified in the electronic databases. According to the eligibility criteria, they selected the articles for full reading. Subsequently, the articles read in full and final inclusion. When there was no consensus among the reviewers on the inclusion and final selection of the studies, the opinion of a third reviewer (R3) considered. The methodological quality of observational studies was analyzed using the Newcastle-Ottawa Scale, which scores three components: group selection (0-4 points), quality of adjustment for confusion (0-2 points) and exposure evaluation after outcome (0-3 points). The satisfactory quality of this scale should ≥6, in which the score of 9 points represents high methodological quality2020 Wells GA, Shea B, O’Connell D, Peterson J, Welch V, Losos M, Tugwell P. The Newcastle-Ottawa Scale (NOS) for assessing the quality of nonrandomised studies in meta-analyses [Internet]. Disponível em: http://www.ohri.ca/programs/clinical_epidemiology/oxford.asp.
http://www.ohri.ca/programs/clinical_epi... .

The evidence of PIM prescriptions identified, explored, and synthesized narratively with tabulation of the results of the included studies. Some did not identify the prevalence of prescriptions that contained PIM, making it impossible to calculate and directly compare the results, so the performance of a meta-analysis would not recommend. It is also noteworthy that the 2012 and 2015 versions of the Beers criteria present differences regarding the categories of PIM, which makes it difficult to jointly analyze the data. In this sense, the prevalence of PIM analyzed in general, regardless of the inclusion of the drug in each category. Thus, the results conducted from descriptive analysis and synthesized, according to the prevalence of PIM.

The search process resulted in the identification of 721 studies and after the selection steps 19 observational studies was included (Figure 1).

Among the selected studies, 17 (89.5%) were retrospective cohort observational studies published from 2013 to 2019. China stood out with the highest number of publications (n=4; 21.0%). The sample size ranged from 104 to 313,733 patients and the duration of the studies from three to thirty-five months. The mean age was 78.2 years (71.5-84.8). The most used criterion for the identification of PIM for the elderly was Beers 2015 (n=11; 57.9%). All studies showed good methodological quality according to the Newcastle-Ottawa scale. The general characteristics of the studies are summarized in Table 1.

Thumbnail
Table 1
Characteristics of the studies included in the systematic review.

Thumbnail
Table 2
Prevalence of potentially inappropriate drugs for the elderly, according to the Beers Criteria of the American Society of Geriatrics (2012 and 2015).

In this regard, it found that the use of medications included in the Beers Criteria may be necessary at certain times. These criteria created not only to identify PIM, but also to support the discussion about the reasons why these drugs prescribed and the situations in which their use may bring greater or lesser risk to the elderly. Therefore, the criteria aim to support, rather than having dominion over a good clinical judgment5353 Steinman MA, Beizer JL, DuBeau CE, Laird RD, Lundebjerg NE, Mulhausen P. How to Use the American Geriatrics Society 2015 Beers Criteria-A Guide for Patients, Clinicians, Health Systems, and Payors. J Am Geriatr Soc 2015; 63(12):e1-e7..

Faced with this situation, educational interventions to raise awareness among prescribers about these criteria are relevant. Studies have shown that there is a decrease in PIM prescribed after educational processes. Najjar et al.2828 Najjar MF, Sulaiman SAS, Al Jeraisy M, Balubaid H. The impact of a combined intervention program: an educational and clinical pharmacist’s intervention to improve prescribing pattern in hospitalized geriatric patients at King Abdulaziz Medical City in Riyadh, Saudi Arabia. Ther Clin Risk Manag 2018; 14:557-564. showed that there was a significant decrease in the incidence rate of PIM from 61% to 29.5% during hospitalization (p<0.001); Komagamine and Hagane3131 Komagamine J, Hagane K. Intervention to improve the appropriate use of polypharmacy for older patients with hip fractures: an observational study. BMC Geriatrics 2017; 17(1):288. pointed out that the proportion of patients who took any PIM decreased significantly from 93.5% on admission to 51.6% at discharge (p<0.001). It emphasized that the interventions described cannot confirm the clinical benefits obtained, since they not evaluated using clinically relevant results, such as mortality and quality of life. However, the interventions described may improve prescription and increase safety in the use of medications. These results state that the Beers Criteria stand out as an important tool for the detection of PIM and guide the change in the pattern of prescriptions, to ensure greater safety in the use of medications.

When interpreting the results of the included articles, it is worth mentioning some limitations to the method that could influence the estimates. Most studies were retrospective and in a single hospital. The use of only one PIM identification tool - Beers Criteria - may have underestimated the frequency of inadequacy, since some medications, especially those not used in the United States of America, not included.

We also highlight the updating of the Beers criteria in 2012 and 2015, generating two different versions. The first with three categories: medications or classes of inappropriate medications, regardless of diagnosis, their potential risks and some of their dosages; medicines that should avoided in specific clinical situations; and medicines or classes of medicines that should use with caution. The 2015 version, in addition to the three categories mentioned above, presents a fourth, referring to drugs whose doses should adjusted, depending on the creatinine clearance of the patient, and a fifth list, with drugs that should avoided in combination due to drug-drug interactions. Thus, there was the exclusion and inclusion of medications in the 2015 version1818 American Geriatrics Society 2015 Beers Criteria Update Expert Panel. American Geriatrics Society 2015 Updated Beers Criteria for Potentially Inappropriate Medication Use in Older Adults. J Am Geriatr Soc 2015; 63(11):2227-2246., which may have interfered in the prevalence of PIM found in this study. Due to the lack of studies using the 2019 version, not evaluated in this review, which may have compromised the current identification of the prevalence of PIM. However, even with these limitations, it is believed there is no harm to the results and conclusions.

The evidence found in the studies shows that there is a high prevalence of prescribed PIM. The Beers Criteria allowed the identification of medications that should avoided in the elderly, have explicit criteria and their use can help in the prevention of adverse events resulting from inadequate drug therapy. Health professionals will be able to use the results of this review for decision-making to avoid the administration of PIM and propose best practices that ensure the safety of the hospitalized elderly.

The small number of studies identified by the systematic review in elderly aged ≥65 years in a hospital environment draws attention to the need for more cohort studies and randomized clinical trials that use the Beers criteria as a measure of the quality of hospital care. Only in this way will the predictive validity of these criteria proven in this scenario. However, such studies should follow standardized methods to validate the use of the criteria in the countries of their application, thus enabling the results of the different studies to be more comparable to each other.

Thumbnail
Figure 1
Study selection flowchart.
Thumbnail
Table 1
Characteristics of the studies included in the systematic review.
Thumbnail
Table 2
Prevalence of potentially inappropriate drugs for the elderly, according to the Beers Criteria of the American Society of Geriatrics (2012 and 2015). 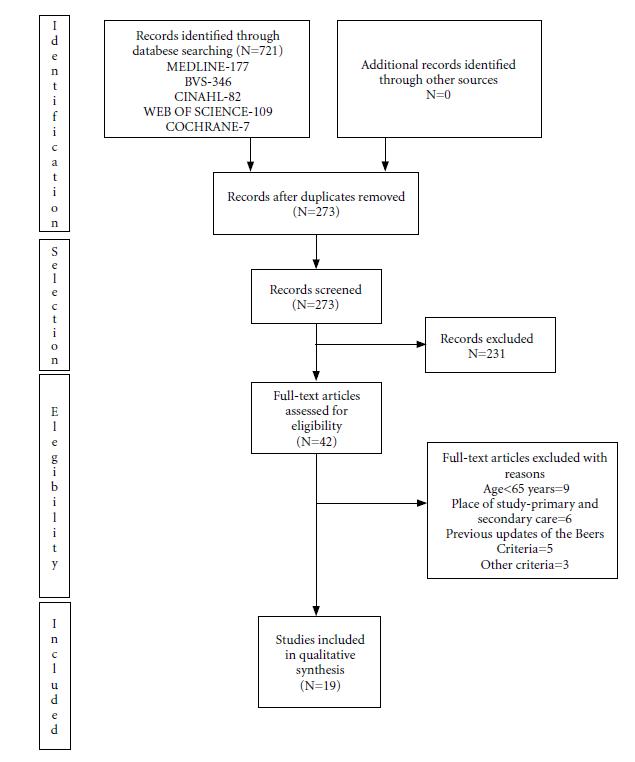 Source: Elaborated by the authors adapted from Preferred Reporting Items for Systematic Review and Meta-Analyses (PRISMA).

Table 1   Characteristics of the studies included in the systematic review.

Table 2   Prevalence of potentially inappropriate drugs for the elderly, according to the Beers Criteria of the American Society of Geriatrics (2012 and 2015).