Spatial analysis studies of endemic diseases for health surveillance: Application of scan statistics for surveillance of tuberculosis among residents of a metropolitan municipality aged 60 years and above

Health surveillance aims to monitor adverse health events, and to set disease prevention and control goals, especially for communicable diseases, such as tuberculosis (TB). Older people have a higher risk of TB, due to their specific characteristics, whichpredispose them to infectious disease. Thus, the objective of this study was to demonstrate the importance of scan statistics for detecting spatiotemporal clusters of TB. We conducted a quantitative is an ecological, descriptive study, with a quantitative approach, using the spatial analysis techniques, specifically scan statistics. The study was conducted in the municipality of Belém, Pará, in Brazil using data on 1,134 new cases of TB diagnosed in individuals aged ≥60 years from 2011 to 2015.The data were analyzed using SaTScan software. The analysis of the spatiotemporal dynamics of TB in the municipality showed thatthe high-risk areas includedthe most densely populated neighborhoods, highlighting the priority of theseareas for disease control measures. Spatial analysis can be used to guide more effective interventions according to the characteristics of the location and the local population.

Endemic diseases, epidemics, and their impact on social conditions have long been studied and discussed in society. Measures to contain diseases and to minimize their collective impact has contributed to the develop “surveillance”. After the adoption of the Federal Constitution of 1988 (Constituição Federal de 1988) and the creation of the Unified Health System (Sistema Único de Saúde - SUS), health surveillance in Brazil became citizenship action with popular participation based on a risk approach and on social epidemiology11 L'Abbate S, Garcia RA. Institucionalização da Vigilância em Saúde de Campinas (SP) na perspectiva da Análise Institucional sócio-histórica. Saude Debate 2017; 39(107):997-1007..

One of the fundamentals of health surveillance is epidemiological surveillance, which aims to systematically monitor adverse health events to qualify control and prevention measures, especially for communicable diseases22 Oliveira CM, Cruz MM. Sistema de Vigilância em Saúde no Brasil: avanços e desafios. Saude Debate 2015; 39(104):266-267., such as tuberculosis, because TB is a respiratory disease.

In this context, this study aims to demonstrate the importance of scan statistics for detecting areas of spatiotemporal clusters of TB to identify risk areas and, thus, to establish prevention and control measures for this population living inrisk area.

This was a quantitative, ecological, descriptive study, conducted using spatial analysis. The study area was the municipality of Belém, capital of the state of Pará, in the northern region of Brazil. Belém has an area of 1,059,458 km², and is divided into 71 neighborhoods, with an estimated population of 1,452,275 inhabitants, including 87,754 aged ≥60 years. The municipality has a Municipal Human Development Index (HDI-M) of 0.746 (high development)1010 Instituto Brasileiro de Geografia e Estatística (IBGE). Cidades. Rio de Janeiro: IBGE; 2017..

Thumbnail
Figure 1
Spatial location of Belém neighborhoods showing the municipal human development index and the number of cases of tuberculosis in people aged ≥60 years by district.

A cluster of cases identified through the window may have varying scanning radiuses1111 Brasil. Ministério da Saúde (MS). Secretaria de Vigilância em saúde. Introdução à Estatística Espacial para a Saúde Pública. Série Capacitação e Atualização em Geoprocessamento em Saúde. Brasília: MS; 2007.. However, only some clusters are considered important. To identify these clusters, the random distribution hypothesis was tested using adiscrete Poisson model (spatiotemporal) and normal model (purely spatial). The premise of the analysis was that the risk of TB among people living inside the spatial window was higher than that among people living outside the window. The Poisson model considered the population of the study area. Statistical significance was set at p≤0.05.

The study was approved by the Research Ethics Committee (Comitê de Ética em Pesquisa - CEP) of the Evandro Chagas Institute (Instituto Evandro Chagas - IEC). The requirement for informed consent was waived because the study was based on a retrospective analysis of tuberculosis case notification data collected for disease surveillance purposes.

Figure 2 shows the most likely locations of clusters of TB among people aged ≥60 years in the city of Belém-PA. Figure 2A shows 3 most significant purely spatial clusters (p<0.005), and 2 clusters with a lower level of significance (p>0.005 and p<0.010), all represented by a circular scanning window. Figure 2B shows the spatiotemporal representation of cases of TB, with 2 most significant (p<0.005) clusters and with one less significant cluster (p<0.010).

Thumbnail
Figure 2
Results from the scan statistics analysis, by cylindrical scanningwindow, using: (A) purely spatial; and (B) spatiotemporal models.

The clusters of Figure 2A are located far apart. Cluster 1 comprises 54 cases with a radius of 1.13 km, located in the neighborhoods: Mangueirão, Benguí, Parque Verde, Cabanagem and Una; and has a standard deviation of 1.06 cases, and a likelihood ratio of 30.60; that is, people living in locations inside the circle are 30.60 more likely to be diagnosed with TB than those living outside the circle.

Cluster 2 comprises 33 cases within a radius of 0.51 km, located in the neighborhoods: Telégrafo, Sacramenta, Miramar, Maracangalha and Barreiro; and has a standard deviation of 1.08 cases. People living in locations inside the circle are 1.99 more likely to be diagnosed with TB than those living outside the circle.

In contract to Clusters 1 and 2, Cluster 3, which comprises 49 cases within a radius of 1.46 km, includes only one neighborhood, Jurunas. People living in locations inside the circle are 10.75 times more likely to be diagnosed with TB than those living outside the circle. Two other, less significant clusters are shown in the neighborhoods Pedreira and Tapanã.

Figure 2B shows the spatiotemporal analysis in which the largest cluster (4), has a radius of 4.24 km, covering the entire central region of the capital of Pará. The number of cases in this cluster is 263, with 195.75 cases expected. The relative risk of the being diagnosed with TB is 1.45 times higher among those living in locations inside the circle than among those living outside the circle. The second cluster (5) 2 with p<0.005 represents a small portion of the Tapanã neighborhood, with a radius of less than 1 km. There were 6 cases of TB diagnosed among people living in the area and the expected number of cases is 0.32. The relative risk of TB among people living inside the circle is 19.08 times higher than those living outside the circle, with p-value of 0.04.

Figure 3 highlights the neighborhoods in which inhabitants havea highly (p<0.005), moderately (p>0.005 and p<0.010) and slightly (p<0.010) higher risk of being diagnosed with TB relative to the other, identifying the neighborhoods. Figure 3B shows the corresponding spatiotemporal analysis of TB in the study area. The number of neighborhoods with a highly significant p-value is higher than that identified in the purely spatial analysis shown in Figure 3A.

Thumbnail
Figure 3
Results from the scan statistics analysis, by Belém neighborhood, in Pará (PA), using: (A) purely spatial and (B) spatiotemporal models.

The spatiotemporal analysis showed that, when analyzed over time, almost the entire population of Belém was at risk of being diagnosed with TB due to the large spatial dispersion of cases over the time, but when analyzed by space alone, there were only 10 neighborhoods in which the risk of TB was significantly increased.

Table 1 provides the statistical details of clusters that were highly significant in the purely spatial and spatiotemporal analyses of TB case notifications in the 2011-2015 period.

The capital of Pará is heterogenous regarding its human development index (HDI). According to the 2013 United Nations Development Program (UNDP) figures1212 Programa das Nações Unidas para o Desenvolvimento (PNUD). Atlas do Desenvolvimento Humano no Brasil. Brasília: PNUD/IPEA/FJP; 2013.; the neighborhoods with the highest HDI are located in the central region of the capital (Batista Campos, Campina, Cidade Velha, Cremação, Fátima, Jurunas, Nazaré, Pedreira, Reduto, São Braz and Umarizal) and the neighborhoods with the lowest HDI are located in the extreme south, near Baía do Guajará, and in the far north, including Outeiro and Mosqueiro. According to the UNDP, the 10 most populous neighborhoods in Belém, were, in decreasing order: Guamá, Pedreira, Marambaia, Tapanã, Marco, Jurunas, Terra Firme, Coqueiro, Sacramenta, and Telégrafo.

In the spatiotemporal analysis, the cluster with the highest significance comprised 6 of the most populous neighborhoods (Telégrafo, Pedreira, Marco, Guamá, Terra Firme and Sacramenta). The neighborhood Tapanã was included in the second highly significant cluster.

Although methods of TB diagnosis, prevention, and treatment have been known for years, Brazil still has high incidence rates of the disease.

Belem-PA remains as a city with a high occurrence of TB, with the disease frequency only lower than Manaus-AM along the north region of Brazil. With the increase in life expectancy over the last decades, the number of people aged 60 years or older has become larger than ever1313 Brasil. Ministério da Saúde (MS). Panorama da tuberculose no Brasil: a mortalidade em números. Brasília: MS; 2016..

This group of people is more vulnerable to diseases, especially in areas with low HDI. This study’s results show that TB cases in elderly people have a higher frequency in neighborhoods with lower HDI and lower population density. This show that TB is an important disease in Belém, especially among the ≥60 years age group, because the incidence in this population is higher than in the total population. The World Health Organization (WHO) aims to reach an incidence target of 10 cases per 100,000 inhabitants, which is still far from being achieved1414 Brasil. Ministério da Saúde (MS). Secretaria de Vigilância em Saúde. Boletim Epidemiológico. Brasília: MS; 2016.. The population aged ≥60 years is a key study group because health conditions among individuals in this age group can have a marked effect on life expectancy, and in addition to a higher proportion of the older population has latent Mycobacterium tuberculosis infection, which can be endogenously reactivated in association with chronic diseases. Timely disease diagnosis in elderly to avoid TB dissemination is also complicated.

This study has potential limitations due to underreporting reported by the Notification Forms of SINAN and incomplete patient’s address in the form. The forms’s limitations to the study should highlight, especially to health professionals, the importance of the correct notation of each case for future studies.

Although TB is an ancient disease, it remains the most common notifiable infectious disease in Brazil. The clustering of cases of TB in geographic space and time, described in this study, highlights the need for new disease prevention and control strategies, especially in high-risk geographic areas identified by the scanning technique.

Spatial analysis, complemented by other techniques, supports health surveillance in detecting priority geographic areas of higher vulnerability, and guides the choice of the most effective interventions according to the characteristics of the site and its population.

Studies using spatial analysis combined with the scanning technique have advanced the understanding of TB dynamics considerably, showing that this disease is not transmitted randomly but instead through risk clusters, suggesting a relationship between TB and the geographical space. These results corroborate previous studies on the association of this disease with socioeconomically vulnerable populations.

Further studies of the scanning technique are needed for a better understanding of TB distribution and dynamics, especially in the older population. The results of this study can be used for improved planning of health policies and health surveillance strategies.

Figure 1   Spatial location of Belém neighborhoods showing the municipal human development index and the number of cases of tuberculosis in people aged ≥60 years by district. 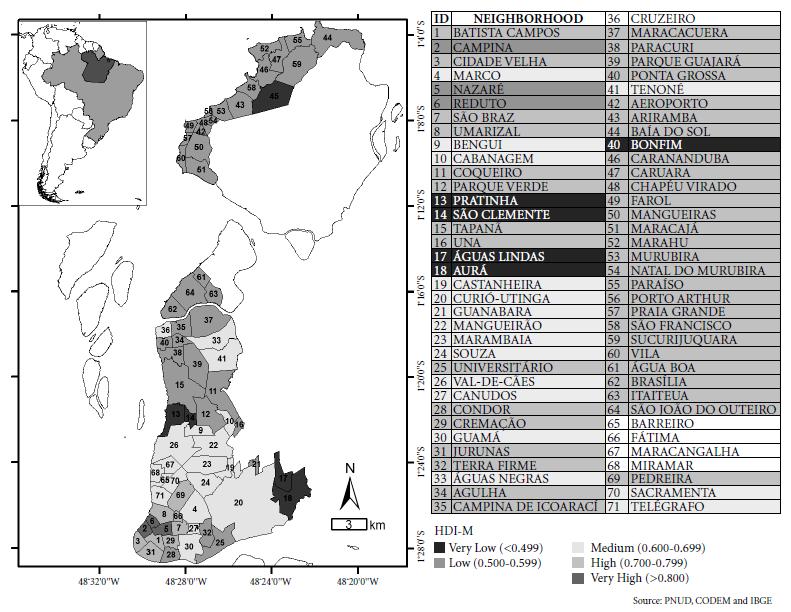 Figure 2   Results from the scan statistics analysis, by cylindrical scanningwindow, using: (A) purely spatial; and (B) spatiotemporal models. 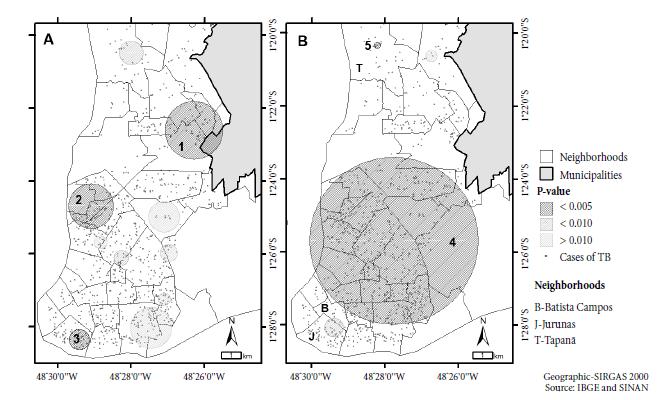 Figure 3   Results from the scan statistics analysis, by Belém neighborhood, in Pará (PA), using: (A) purely spatial and (B) spatiotemporal models. 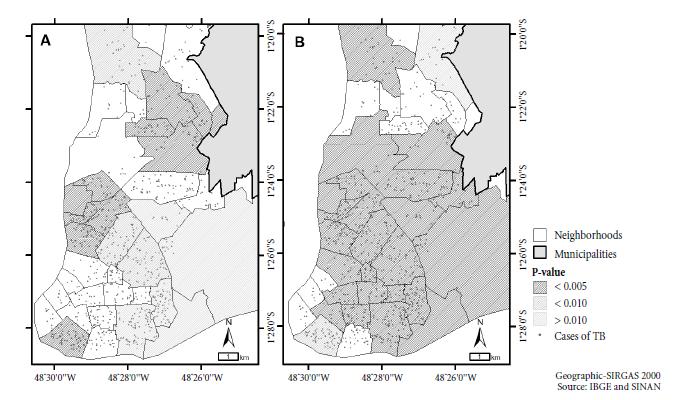 SciELO Analytics
Dimensions
Spatial analysis studies of endemic diseases for health surveillance: Application of scan statistics for surveillance of tuberculosis among residents of a metropolitan municipality aged 60 years and above
PlumX