Tobacco use among transgender and gender non-binary youth in Brazil

Transgender and gender non-binary youth are particularly vulnerable to tobacco smoking and susceptible to smoking adverse health outcomes. That is, they are in special risk to start smoking and, after starting, they may face worse outcomes when comparing to their cisgender peers. Therefore, the present study aims to evaluate factors associated with tobacco use among transgender and gender non-binary youth. Brazilian youth aged 16 to 25 who identify as transgender or gender non-binary answered an online questionnaire. Poisson regression with robust variance was run to predict smoking cigarettes based on individual and environmental factors. 14.1% of 206 youth reported smoking cigarettes daily, whereas 9.3% of participants reported smoking e-cigarettes occasionally. Drug use, lack of social support, deprivation, discrimination, the wait for medical gender-affirming procedures and being outside school were associated with smoking cigarettes. Contextual and individual factors should be further explored in causal analysis and taken into consideration when planning smoking prevention and cessation interventions for transgender and gender non-binary youth.

The present study aims to evaluate factors associated with tobacco use among transgender and gender non-binary youth.

Participants were recruited by convenience sampling through a Facebook announcement that was available from February to April 2018. The advertisement was visible for Facebook users who lived in Brazil; were between 16 and 25 years old; and “liked” or joined groups or events related to transsexuality. Facebook statistics suggested that 1.37% of the impressions directed volunteers to the main page of the study.

The project was approved by the Ethical Committee and Research Commission of Universidade Federal do Rio Grande do Sul Psychology Institute. Volunteers were informed about the research objectives, and the inexistence of direct benefices for joining the survey, before signing the consent. Confidentiality and anonymity were assured, as well as the possibility to withdraw at any time.

The survey was modeled after the TransYouth CAN! Project, a cohort study that will document sociodemographic and health-related characteristics of Canadian transgender and gender non-binary youth and their parents/caregivers. The procedure for cross-cultural adaptation of the instrument for Brazilian populations was based on Borsa et al.3131 Borsa JC. Cross-Cultural Adaptation and Validation of Psychological Instruments: Some Considerations. Padeia 2012; 22(53):423-432..

Regarding smoking, participants answered whether they currently smoke both cigarettes and e-cigarettes (or vaping), choosing between “yes” or “no” options.

In order to evaluate substance use, participants answered whether, in the last 12 months, they had used any substance, including cannabis and medications that were not prescribed.

The Deprivation Scale was developed by TransYouth CAN! Team in order to verify whether transgender youth had access to basic needs. It is composed of five questions each one with a 5-point Likert scale from “always” to “never”. For example, “in the last 12 months, how often did you have access to proper seasonal clothing (such as coat, hat, boots, etc.) if and when you need them?”.

To assess family cohesion, transgender youth were asked to choose, using a scale of one to five, from “my family works well together” to “we really need help”. This question is part of Self-Report Family Instrument3333 Beavers R, Hampson RB. The Beavers systems model of family functioning. Assoc Fam Ther 2000; 22:128-143..

The discrimination scale was developed by the TransYouth CAN! Team. It is composed of nine questions evaluating previous experiences of discrimination, for example, “because of who you are, have you been called names or heard/saw your identity used as an insult?”. A four-point Likert-type scale was used to answer each question, ranging from “never” to “yes, many times in the past year”.

The instrument to evaluate security was developed by TransYouth CAN! Team. It encompasses four questions each one with a 5-point Likert scale from “always” to “never”. For example, “how often do you feel safe in the following places: in your neighborhood in the daytime?”.

SPSS software version 18.0 was used for data management and statistical analyses. Ethnicity, age, gender identity, the Brazilian region, substance use, and family structure were transformed into dummy variables, whereas security, social support, deprivation and discrimination were included as continuous variables. Shapiro-Wilks test of normality was utilized to assess the normality of continuous variables. When the assumption of normality was confirmed, t-tests were applied. When either one or both of group’s data was not normally distributed, or the groups` sizes differed significantly, Mann-Whitney U Tests were utilized.

Since the prevalence of smoking cigarettes was higher than 10% among transgender and gender non-binary youth, the odds ratio from a logistic regression model would overestimate the risk ratio. Thus, Poisson regression with robust variance was applied to estimate crude prevalence ratios (PR) for smoking cigarettes, with individual and contextual factors as independent variables3535 Barros AJ, Hirakata VN. Alternatives for logistic regression in cross-sectional studies: an empirical comparison of models that directly estimate the prevalence ratio. BMC Med Res Methodol 2003; 13:1-13.. The first set of models considered all independent variables individually to produce crude PRs, while the second model included all individual- and contextual-level factors to produce adjusted PRs.

As shown in Table 2, participants who smoked cigarettes reported more experiences with discrimination (p=.006) and deprivation (p<.001), as well as reported waiting for gender-affirming procedures (p=.024) and using drugs more frequently in the last 12 months (p<.001) compared to transgender youth who did not smoke cigarettes.

To date, the present research is the first to assess the associations of Person (age, ethnicity, study, place of residence and drug use) and Context factors (social and familial support, discrimination and deprivation, insecurity and lack of healthcare access) with smoking among transgender and gender non-binary youth. Furthermore, it is the only study that attempts to estimate the prevalence of smoking (both e-cigarettes and cigarettes, respectively) among transgender and gender non-binary youth who live in a developing country. While the observed prevalence and associations should be considered exploratory given the lack of population-based sample, they remain valuable given the paucity of data on Brazilian transgender and gender non-binary youth and the practical impediments to capturing such a group with population-based sampling.

This study provides the first exploratory evidence that smoking prevalence may be elevated among Brazilian transgender and gender non-binary youth compared to population-based estimates from the general population. Furthermore, minority stressors such as lack of access to gender-affirming medical care may contribute to this elevated prevalence. Future studies should continue to investigate these potential differences, acknowledging that stressors and determinants of smoking may be distinct for LGB youth compared to gender non-binary youth. Furthermore, research should focus on developing and evaluating smoking prevention and cessation interventions designed specifically for transgender and gender non-binary adolescents and young adults - that is, programs that take into account population-specific barriers to health including deprivation, discrimination, and lack of access to necessary medical care.

We thank the Health Equity and Epidemiology Research Group (HEER) for multiple, and very useful, insights. We also thank TransYouth CAN! Team for sharing their survey. We also acknowledgments both CNPq and CAPES for funding this research through scholarships. 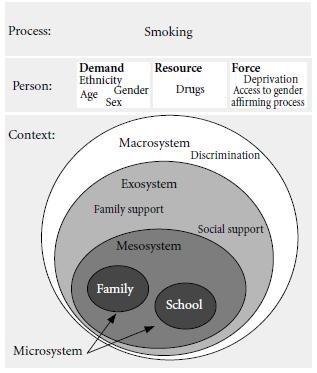 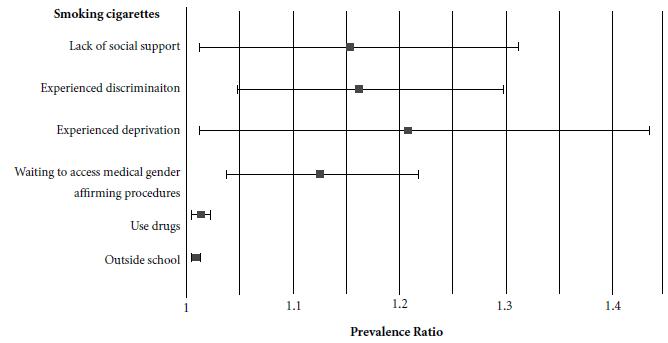