The objective of this study was to conduct the initial stages of the cross-cultural adaptation to Brazilian Portuguese of a scale to measure the level of knowledge about HPV. The stages included: translation from English into the Portuguese spoken in Brazil; synthesis of the translated version; back-translation; analysis by an expert committee; and reliability analysis based on internal consistency and reproducibility. Cronbach's α coefficient for the instrument was 0.985. Subset analysis produced only minor variations. The correlation coefficients between the individual items and the overall result showed strong positive correlations, except for three items. Reproducibility analysis showed kappa values with substantial or moderate agreement for the majority of the items. A preliminary Brazilian version was obtained with satisfactory results, but other stages are necessary in the process of validation of the Brazilian version.

The Brazilian Federal government launched an HPV immunization campaign in 2014 (Brazilian Ministry of Health. http://pni.datasus.gov.br/consulta_hpv_14_C01.php). The campaign has raised social and ethical discussions on the fact that vaccination against a sexually transmitted virus is being targeted to young girls. Lack of the population's knowledge on HPV may explain some parents' reluctance to have their daughters vaccinated.

Waller et al. 22. Waller JO, Ostini R, Marlow LAV, McCaffery K, Zimet G. Validation of a measure of knowledge about human papillomavirus (HPV) using item response theory and classical test theory. Prev Med 2013; 56:35-40. developed a scale to measure the level of knowledge on HPV, the only validated tool for this purpose. The "Measure of Knowledge about HPV" consists of 29 statements divided into three subscales, one on HPV, one on the vaccine, and the last on the HPV test. Interviewees are asked to check "true", "false", or "I don't know" for each of the statements.

Since public understanding of HPV vaccination can play a key role in the success of this preventive measure by the Brazilian public health system, the current study developed the preliminary stages of cross-cultural adaptation of a measure of knowledge and awareness about HPV, previously validated in English 22. Waller JO, Ostini R, Marlow LAV, McCaffery K, Zimet G. Validation of a measure of knowledge about human papillomavirus (HPV) using item response theory and classical test theory. Prev Med 2013; 56:35-40..

This was a cross-sectional study to begin the cultural adaptation of a self-administered questionnaire. Individuals invited to participate in the study were parents of children 9 to 13 years of age living in southern Santa Catarina State, Brazil, who were able to answer the online questionnaire. Parents of students enrolled in both public and private schools were recruited. Online invitations were sent to 90 parents, asking them to access the link to the questionnaire. A non-probabilistic sampling plan was used.

Two Brazilians with good knowledge of English translated the questionnaire from the source language to the target language. One translator had a health background and knew the study objectives, and the other had a Master's degree in linguistics was blinded to the study objectives.

The authors compared the two versions and merged them into a third version, which was used as the questionnaire's primary Brazilian version.

Back-translation was performed independently by two individuals. Both were native English speakers and had extensive experience with Brazilian Portuguese. From the two back-translated versions, the authors formulated a third version in English, which was compared to the original version in the source language.

The expert committee consisted of the study's authors plus a researcher in sexually transmitted diseases, an expert in language and linguistics, a PhD student in health sciences who was knowledgeable on technologies required for cross-cultural adaptation, and two epidemiologists.

The expert committee's role was to review all steps in the process and evaluate the semantic, idiomatic, experiential, and conceptual equivalences. The process was completed with the preparation of the questionnaire's pre-final version.

After informed consent was obtained, a link to the questionnaire Brazilian version was provided, using Google Docs (https://www.google.com/docs). This software generated a database in MS Excel 2013 (Microsoft Corp., USA), exported to SPSS v. 20 (IBM Corp., Armonk, USA), on which the statistical analyses were performed.

In a second stage, 39 subjects completed the questionnaire on two occasions with a 10-15-day interval. Reproducibility analysis was performed using the same software cited in the previous stage. Internal consistency was obtained through Cronbach's α; intra-observer reliability was estimated with the kappa coefficient; and correlation between items and the instrument's overall result was observed by means of the Spearmen rank correlation coefficient. The research project was approved by the Ethics Research Committee of the University of Southern Santa Catarina, under protocol number 734735.

During the process of translation and cross-cultural adaptation, some expressions had to be reworded to fit the Brazilian context. Most of the significant changes were made in the introduction to the questionnaire. One change was the phrase "cervical cancer", which was translated as câncer de colo de útero (cancer of the uterine cervix).

Some details were detected by the translators and back-translators and discussed by the expert committee. The English word "condom" can have different translations in Portuguese. A rather formal equivalent is preservativo, but condom can also be translated more informally as camisinha. We preferred the term camisinha masculina e feminina (male and female condoms) on grounds that it would be understood more easily by the Brazilian general population.

The Brazilian version of the measurement tool showed excellent internal consistency, with Cronbach's α of 0.985. Subset analysis showed little variation: 0.999 for the first subset, 0.996 for the second, and 0.998 for the third. The correlation coefficients between each item and the overall result showed strong positive correlations, ranging from 0.904 to 0.949. Exceptions were the results of the last three items in subset 3 (Table 1). Table 1 shows the kappa values used for measuring reproducibility through test and retest at 10-15-day intervals.

Thumbnail
Table 1:
Correlation coefficients between items and overall result, Cronbach's α for items that were disregarded, and kappa coefficients. Brazilian version of a measure of knowledge about human papillomavirus (HPV) and HPV vaccination.

The cross-culturally adapted Brazilian version of the measure of knowledge showed excellent results in terms of internal consistency. The proposed Brazilian version also showed high stability, since exclusion of single items generated only small variations in Cronbach's α. Despite limitations in Cronbach's α, the omission of certain items led to increased coefficients, suggesting its importance for the subscales and overall scale. The results of correlations between each item and the overall result showed a slight variation in the third subset. While there was a strong correlation in the first three items, the last three items showed moderate correlations. Hypothetically, this could be explained by the fact that these items were related to HPV testing, and participants might have difficulty understanding them. In the countries where the measurement tool was originally validated, the test is widely used, whereas in Brazil it is only performed in the private health system.

The test-retest results showed good reproducibility of the Brazilian version. However, low values found in two items may reflect some vulnerability of the measure or changes in the respondents' opinions between test and retest. It should be noted that knowledge level assessment is highly subjective, and certain items are related to individual behavior, which can require adequate knowledge of the subject.

A possible limitation is that the study was developed in a southern Brazilian state. Although Portuguese is spoken all across the country, Brazil has continental dimensions and thus a variety of cultural contexts. This study used a self-administered online questionnaire based on the assumption that participants would feel more comfortable than in face-to-face interviews. In contrast, if the questionnaire is not self-explanatory and well formatted, it may raise doubts and lead to inadequate completion. No problems of this magnitude were detected in this study. However, although unplanned, some participants sent e-mail messages to the researchers asking questions and offering suggestions on the scale. One statement that caused difficulty in understanding was "O teste de HPV e o Papanicolau podem ser feitos ao mesmo tempo" (The HPV test and Pap smear can be performed at the same time). The doubt was whether the statement referred to the diagnostic method itself or the sample collection. So, the statement was reworded to "A coleta da amostra para os testes de HPV e Papanicolau pode ser feita ao mesmo tempo" (Sample collection for the HPV test and Pap smear can be performed at the same time).

The preliminary model of the Brazilian Portuguese version of this instrument showed satisfactory reliability; however, further studies with larger samples are needed to test the measurement tool's reliability and validity.

The authors wish to thank Renata Bonetti Alves, Maria Luiza Kracik, Wilson Schuelter, and Stefano Demetrios for participating in the study as translators or back-translators in the early stages of the cross-cultural adaptation process.

Thumbnail
Table 1:
Correlation coefficients between items and overall result, Cronbach's α for items that were disregarded, and kappa coefficients. Brazilian version of a measure of knowledge about human papillomavirus (HPV) and HPV vaccination.

Table 1:   Correlation coefficients between items and overall result, Cronbach's α for items that were disregarded, and kappa coefficients. Brazilian version of a measure of knowledge about human papillomavirus (HPV) and HPV vaccination. 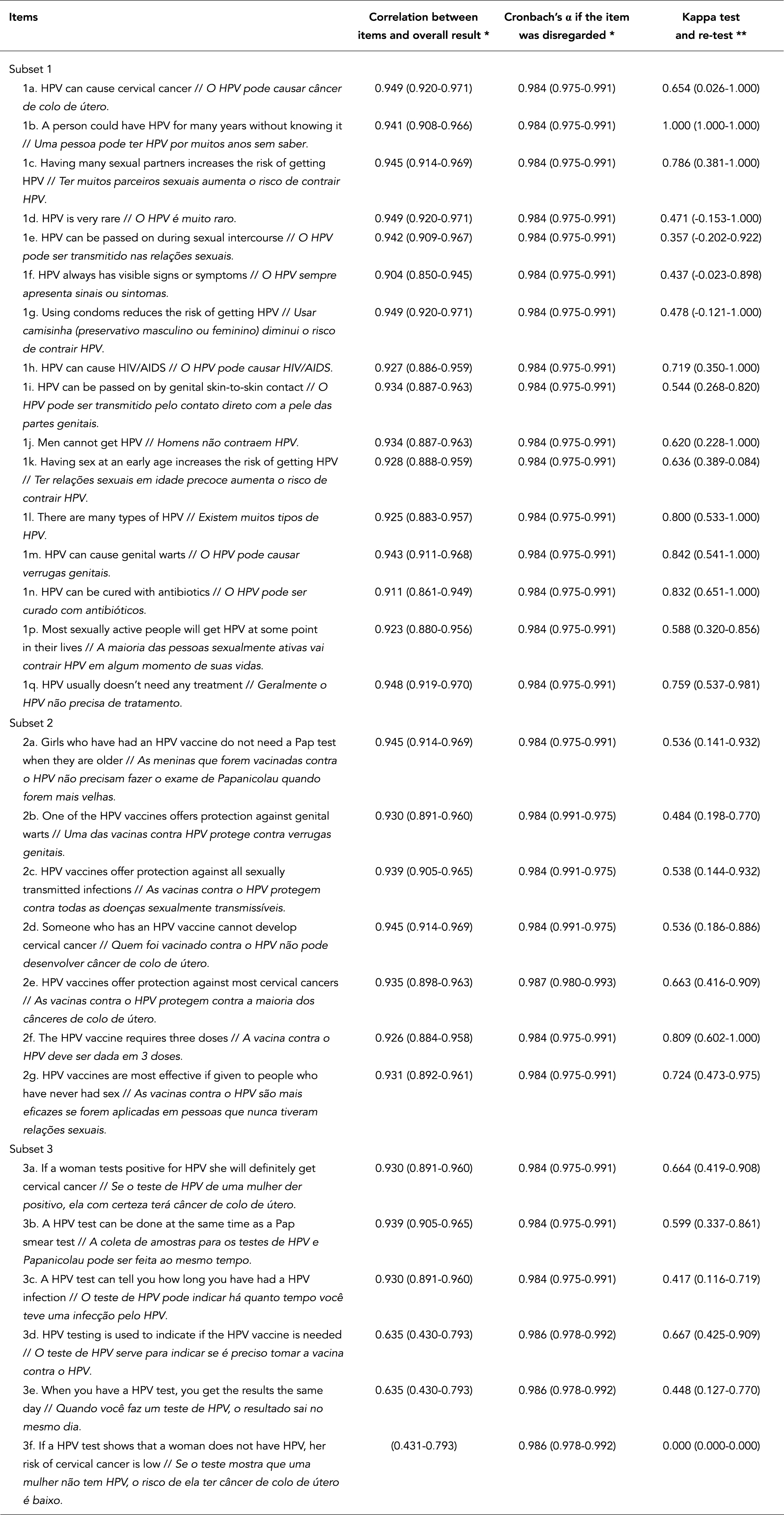