It is well known that preterm birth leads to reduced birth weight due to shortening of pregnancy duration 2121. Blencowe H, Krasevec J, Onis M, Black RE, An X, Stevens GA, et al. National, regional, and worldwide estimates of low birthweight in 2015, with trends from 2000: a systematic analysis. Lancet Glob Health 2019; 7:e849-e60.. However, little is known about the contribution of fetal growth to birth weight among term newborns, especially in low and middle-income countries. Moreover, it is necessary to investigate the influence of different factors on trends in mean birth weight, especially in cities with different socioeconomic levels and medical technology incorporation. So, the aim of this manuscript is to evaluate changes in mean birth weight of term newborns, using data from eight birth cohorts from three cities located in different regions of Brazil - Ribeirão Preto, São Luís and Pelotas - and to identify factors associated with these changes.

This study used data from eight birth cohorts carried out in three Brazilian cities: Ribeirão Preto, Pelotas and São Luís, from 1978 to 2010. Multiple pregnancies, missing gestational age or gestational age lower than 37 weeks or greater than 42 weeks were excluded.

In all eight cohorts, information was obtained through questionnaires answered by the mothers regarding socioeconomic, health service, reproductive, lifestyle and demographic variables. Birth weight was measured using analog scales with precision of 10 g in Ribeirão Preto in 1978/1979 and 1994, in Pelotas in 1982, and in São Luís in 1997/1998. Digital scales with precision of 5g were used in Ribeirão Preto and São Luís in 2010 and with 10g in Pelotas in 1993 and 2004.

The variables analyzed were: birth weight (continuous - in grams), maternal age (< 20, 20-34, and ≥ 35 years), maternal education (0-4, 5-8, 9-11, and ≥ 12 years), marital status (with or without a partner), parity, including the current delivery (1, 2-4, ≥ 5), adequacy of prenatal care visits (at least six attendances), maternal smoking during pregnancy (yes or no), type of delivery (vaginal or caesarean) and sex of the newborn. Gestational age was estimated according to the last normal menstrual period in Ribeirão Preto in 1978/1979 and 1994, Pelotas in 1982, and São Luís in 1997/1998 and 2010. In Pelotas 1993 and 2004, gestational age was calculated by the best obstetric estimate, based primarily on ultrasound, and secondarily on the last normal menstrual period. In Ribeirão Preto 2010, two criteria were employed to estimate gestational age: the first criterion took into account the date of the last normal menstrual period reported by the mother and the second used an algorithm that was based on the date of the last normal menstrual period and on the obstetric ultrasonography if it was available. Missing data on gestational age were imputed in a linear regression model using birth weight, parity, family income and sex as predictors 2525. Little RJA, Rubin DB. Statistical analysis with missing data. 2nd Ed. New Jersey: John Wiley & Sons; 2002. for Ribeirão Preto and São Luís birth cohorts. Gestational age was categorized into 37-38 or 39-41 weeks.

Statistical analyses were performed with Stata (https://www.stata.com). The chi-square test was used to compare proportions. Means of birth weight and differences between mean birth weight over the years and their 95% confidence intervals (95%CI) were calculated.

Initially we ran a model containing all cohorts together. Interactions between year (continuous) and city (categorical) and a quadratic term for year were tested. Since interactions between year and city were highly significant we ran separate models for each city and furthermore only two birth cohorts were compared at a time because of nonlinearities (the quadratic term was significant).

For the older cohorts (Ribeirão Preto, 1978/1979 and 1994; Pelotas, 1982 and 1993; and São Luís, 1997/1998) we obtained the approval of an Internal Committee of the respective Schools of Medicine and verbal informed maternal consent. All other cohorts were approved by the Research Ethics Committees of the teaching institutions to which they were linked and the mothers gave written informed consent before interview.

The supplementary Tables 1 and 2 (http://cadernos.ensp.fiocruz.br/site/public_site/arquivo/suppl-csp-0994-19_9550.pdf) present changes in variables that may influence birth weight. Maternal age was increased in all cities. Maternal smoking and parity were reduced in all comparisons except in Pelotas from 1982 to 1993. Maternal schooling and caesarean delivery increased in all three cities, except in Pelotas from 1982 to 1993 where the maternal schooling was reduced in the category over 12 years of study and the caesarean delivery did not change. Gestational age of 37-38 weeks rose in Ribeirão Preto, from 1978/1979 to 1994; Pelotas, from 1982 to 1993; and São Luís, from 1997/1998 to 2010, but decreased in Pelotas, from 1993 to 2004; and did not change in Ribeirão Preto, from 1994 to 2010.

In Pelotas, mean birth weight decreased 27.7g (95%CI: -47.7; -7.7) from 3,283g in 1982 to 3.255g in 1993 (Table 1). After adjustment for confounding and taking into account a significant interaction between year and type of delivery, those born vaginally presented birth weight 37g lower in 1993 than in 1982. Despite this reduction in birth weight, cesarean delivery was a contributing factor to children born 3g heavier (Table 2).

In São Luís, mean birth weight increased 24.7g (95%CI: 0.1; 49.2) from 3,242g in 1997/1998 to 3.266g in 2010 (Table 1). After adjustment for confounding and taking into account one significant interaction between year and maternal schooling, this increase was explained by the higher mean birth weight among children of mothers with low schooling and born by cesarean section. Those born to mothers with low schooling (< 4 years) were 86g heavier in 2010 compared to those born in 1997, whereas those born to mothers with high school education (≥ 12 years) were 56g lighter at birth in 2010 than those born in 1997. Those born vaginally in 2010 were 24g leaner whereas those born by cesarean were 46g heavier in 2010 compared to their counterparts born in 1997 (Table 2).

Trends in mean birth weight among term births varied over time. Mean birth weight reduced in the first study period (Ribeirão Preto, from 1978/1979 to 1994; and Pelotas, from 1982 to 1993) and increased in more recent times (Ribeirão Preto, from 1994 to 2010; and São Luís, from 1997 to 2010). However, it did not change in Pelotas, from 1993 to 2004. Apart from these diverging trends over different time periods, the variables that seem to have been able to explain these trends in multivariable models varied over time.

The increased birth weight in recent years occurred despite a decrease in mean gestational age in all cities, indicating that in this period the rise in birth weight was due to increased fetal growth. The increasing birth weight in recent years verified in Brazilian cities in the 1990s are consistent with improvements in socioeconomic and regional disparities, health service coverage, maternal education and in prenatal and childbirth care use, as well as reduction in income inequality at this time 3232. Victora CG, Aquino EM, do Carmo Leal M, Monteiro CA, Barros FC, Szwarcwald CL. Maternal and child health in Brazil: progress and challenges. Lancet 2011; 377:1863-76.. In this study maternal education consistently contributed to explain a portion of the increase in mean birth weight in São Luís and in Ribeirão Preto in the more recent period.

In São Luís, cesarean section also seems to explain the increased mean birth weight. It is possible that increased availability of early ultrasound to date pregnancy more accurately and increased awareness of the possible risks of preterm birth due to scheduled elective cesarean sections are contributing to the postponement of surgical births to more advanced gestational ages. It possibly led to improvements in birth weight among term births. High weight fetuses tend to have indication for cesarean delivery, which may also help explain the increased weight of term newborns delivered by cesarean.

The three evaluated towns have different socioeconomic levels. Ribeirão Preto is one of the cities with the highest HDI in the country. São Luís is the capital of one of the poorest Brazilian states. Pelotas, although located in a state with high socioeconomic development, has an HDI slightly lower than that of São Luís. These cities also have different levels of availability to health technology, which is higher in Ribeirão Preto. Despite these differences in socioeconomic indicators and incorporation of health technology, birth weight trends seem to have been similar across cities.

Some variables that were not included in this analysis because they were not available for all cohorts could have had some influence on the average birth weight. Pre-gestational body mass index (BMI) and weight gain during pregnancy have been reported in the literature as factors that may affect the birth weight of the baby. Mothers who gain more weight than recommended during pregnancy have a higher risk of having babies with macrosomia, and those who gain less weight than recommended have a higher risk of having small for gestational age babies 3434. Goldstein RF, Abell SK, Ranasinha S, Misso M, Boyle JA, Black MH, et al. Association of gestational weight gain with maternal and infant outcomes: a systematic review and meta-analysis. JAMA 2017; 317:2207-25.. A systematic review showed that women with low birth weight in the pre-gestation or early pregnancy period were more likely to have low birth weight or preterm infants 3535. Rahman MM, Abe SK, Kanda M, Narita S, Rahman MS, Bilano V, et al. Maternal body mass index and risk of birth and maternal health outcomes in low- and middle-income countries: a systematic review and meta-analysis. Obes Rev 2015; 16:758-70..

This has limitations such as the absence of some variables that could have influenced birth weight such as pre-pregnancy BMI and induction of labor. The birth weight measurement method changed over time between cohorts: in some of them, digital scales were used and in others, analog scales. This may have influenced average birth weight. Another limitation is the method used for estimating gestational age, which varied between the cohorts. It has been described that last normal menstrual period tend to overestimate gestational age 3636. Aris IM, Kleinman KP, Belfort MB, Kaimal A, Oken E. A 2017 US reference for singleton birth weight percentiles using obstetric estimates of gestation. Pediatrics 2019; 144:e20190076.,3737. Callaghan WM, Dietz PM. Differences in birth weight for gestational age distributions according to the measures used to assign gestational age. Am J Epidemiol 2010; 171:826-36.. Nevertheless, other studies also pointed out that last normal menstrual period may provide a good estimate for calculating gestational age, although its use is not recommended for making clinical decisions such as elective cesarean sections 3838. Macaulay S, Buchmann EJ, Dunger DB, Norris SA. Reliability and validity of last menstrual period for gestational age estimation in a low-to-middle-income setting. J Obstet Gynaecol Res 2019; 45:217-25..

However, it stands out as key strengths for this study the use of data from eight birth cohorts held in three different Brazilian cities and located in regions with different socioeconomic characteristics. In addition, all cohorts are population-based studies in which random samples of births or all births in the cities were included. Percentages of losses in the eight cohorts were low and the methods used for data abstraction in the eight cohorts were similar.

We thank all mothers and babies who participated in these cohort studies. We also thank the funding agencies that funded these studies. 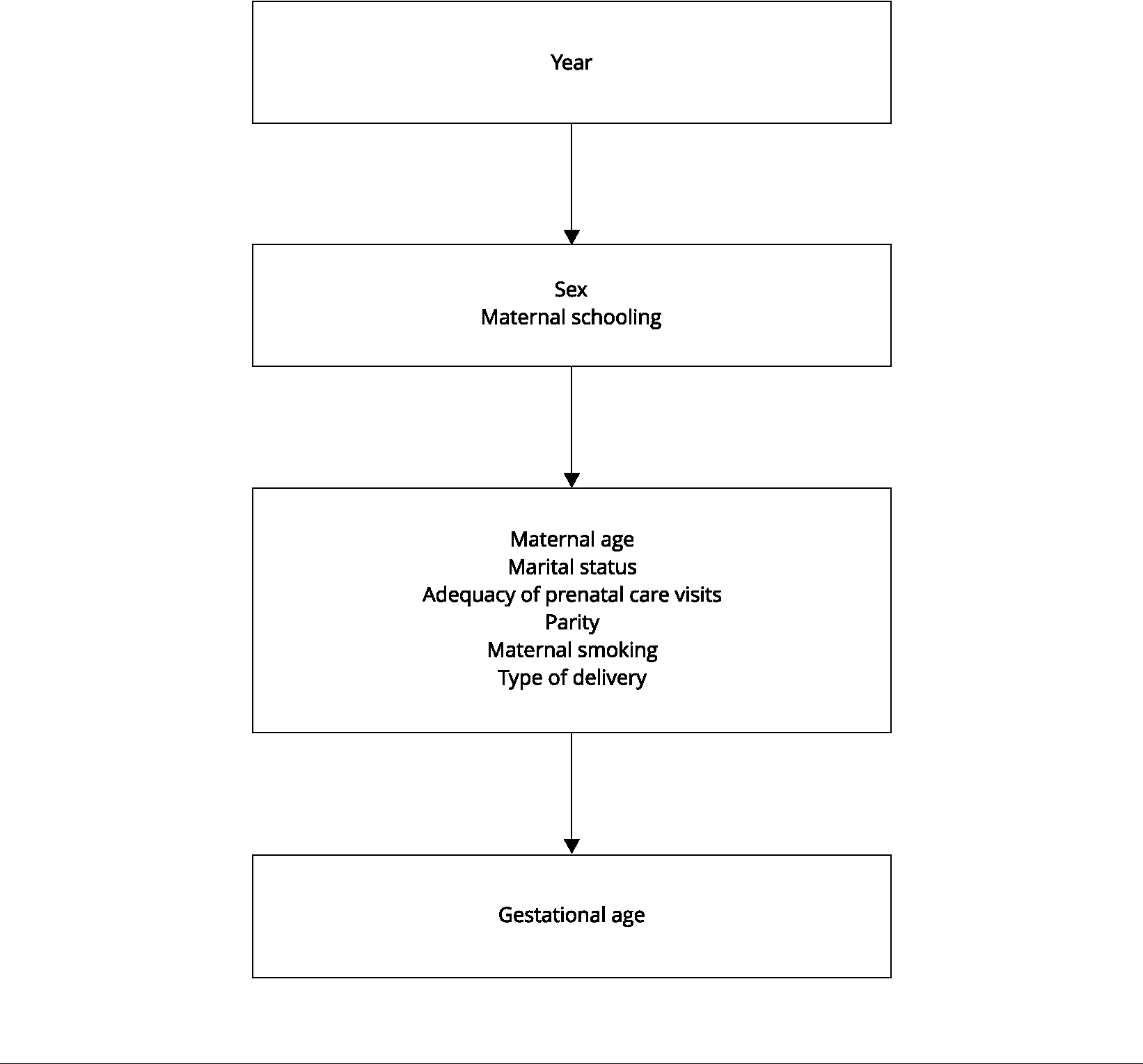