This study aimed to analyze the presence of adequate infrastructure and work process in primary health care for the diagnosis, management, and treatment of syphilis in Brazil in 2012, 2014, and 2018. This is a cross-sectional, nationwide study with data from the three cycles of the Program for Improvement of Access and Quality of Basic Healthcare (PMAQ-AB): 2012 (Cycle I), 2014 (Cycle II), and 2018 (Cycle III). Two outcomes were assessed: adequate infrastructure and work process. The independent variables were macroregion, municipality size, Municipal Human Development Index (HDI-M), and coverage of the Family Health Strategy (FHS). Variance-weighted least squares regression was used to estimate annual changes in percentage. In total, 13,842 primary basic health units (UBS) and 17,202 professional health care teams were assessed in Cycle I; 24,055 UBS and 29,778 teams in Cycle II, and 28,939 UBS and 37,350 teams in Cycle III. About 1.4% of UBS had adequate infrastructure in Cycle I; 17.5% had in Cycle II; and 42.7% had in Cycle III. Adequate work process also increased in the three cycles, ranging from 47.3% in Cycle I to 45.5% in Cycle II and 75.4% in Cycle III. However, inequities are observed, considering that richer regions and larger municipalities, with higher HDI-M and lower FHS coverage improved the most. The low prevalence of adequate infrastructure and work process for the care of patients with syphilis in Brazil reflects a significant weakness in the Brazilian health system.

Syphilis is a sexually transmitted infection (STI) caused by the bacterium Treponema pallidum, usually transmitted by contact with infectious wounds, by blood transfusion, or by mother-to-child during pregnancy. Despite the effective methods of prevention, an easy diagnosis and low-cost treatment for the disease are still a public health problem, especially in low- and middle-income countries 11. World Health Organization. WHO guidelines for the treatment of Treponema pallidum (syphilis). https://apps.who.int/iris/bitstream/handle/10665/249572/9789241549806-eng.pdf (accessed on 14/Aug/2021).
https://apps.who.int/iris/bitstream/hand... . Moreover, when not treated properly, the disease lasts for years and can cause serious problems, especially congenital syphilis - considered the second leading cause of stillbirths worldwide -, abortion, low birth weight, prematurity, and congenital malformations 22. Secretaria de Vigilância em Saúde, Ministério da Saúde. Sífilis 2016. Boletim Epidemiológico 2016; 47(35). http://www.aids.gov.br/pt-br/pub/2016/boletim-epidemiologico-de-sifilis-2016.
http://www.aids.gov.br/pt-br/pub/2016/bo... .

Despite the long history of syphilis in Brazil and its serious consequences for public health, the health system has only recently created responses to further combat the problem, emphasizing the relevance of assessing this topic. This article aimed to analyze the infrastructure and adequate work process in PHC for the diagnosis, management, and treatment of syphilis in Brazilians based on data from the three cycles of the PMAQ-AB.

This is a cross-sectional study with data from the external assessment of the three cycles of the PMAQ-AB. The PMAQ-AB was established by the Brazilian Federal Government with Decree n. 1,654 of April 19, 2011, to expand access to and to improve the quality of PHC based on the assessment of PHC services. The program had three cycles of external assessment, conducted from: May to December 2012 for Cycle I; November 2013 to October 2014 for Cycle II; and July 2017 to August 2018 for Cycle III. Membership in the PMAQ-AB was voluntary and the proportion of participating municipalities increased over the three cycles: from 71% in Cycle I to 91% in Cycle II and 96% in Cycle III.

The data collection instrument contained structured questions prepared by the Brazilian Ministry of Health in partnership with the leading HEIs and was divided into three modules. The first module verified the infrastructure of the basic health units (UBS) and the second assessed the work process of the teams by interviewing health care professionals. The third module was answered by users who were present at the UBS on the day of data collection, addressing their perception of the care received.

For this study, information on the UBS infrastructure modules and the professional work process of the teams were used in the three assessment cycles. For the construction of the outcomes, available variables that were related to the infrastructure and work process for diagnosis, management, and treatment of syphilis were selected. Based on the identification of these variables, two outcomes were created:

(2) Adequate work process for diagnosis, management, and treatment of patients with syphilis: Affirmative answer to the questions “Does the team request serology for syphilis?”; “Is the offer of services and referrals for pregnant women based on the assessment and classification of risk and vulnerability?”; “Does the team request HIV serology?”; “Is penicillin G benzathine applied at UBS?”. An affirmative answer to the four investigated items was considered as having an adequate work process.

The adequate infrastructure outcome was assessed considering the number of UBS evaluated. For the adequate work process outcome, the number of health care teams investigated was considered. The variables of each of the outcomes for the three cycles of the PMAQ-AB were initially described. The prevalence of each outcome in each evaluation cycle was calculated. To identify the difference between cycles, weighted least square regression was done to estimate percentage annual changes in the prevalence values. A significance level of 5% was adopted. All analyses were performed using the Stata 15.0 statistical package (https://www.stata.com).

Figure 1 shows the distribution of outcome variables. Among variables related to the infrastructure outcome, we observed that the low prevalence of rapid testing for syphilis in Cycle I (1.4%) increased in Cycle III (72.1%); in Cycle III, less than 70% of UBS had medication and PPE for the management and treatment of syphilis, especially penicillin G benzathine. From the work process outcome, we found that the use of penicillin G benzathine in the UBS increased about 26 percentage points (p.p.) between cycles, reaching 77.1% in Cycle III (Figure 1).

Thumbnail
Figure 1
Prevalence of items related to the infrastructure and work process for syphilis diagnosis, management, and treatment. PMAQ-AB, Brazil, 2012, 2014, and 2018.

Regarding the prevalence of adequate infrastructure for diagnosis, management, and treatment of syphilis in Brazil, we identified that only 1.4% of UBS had minimal infrastructure in Cycle I, increasing to 17.5% in Cycle II and 42.8% in Cycle III, with an annual change of 7.0p.p. (Table 2).

This study found that the proportion of adequate infrastructure and work process for diagnosis, management, and treatment of syphilis in Brazilian PHC significantly increased from 2012 to 2018. The studied outcomes improved in all regions, population sizes, categories of HDI-M, and FHS coverage of municipalities. Nevertheless, disparities persist, considering that the richest regions and larger municipalities with a higher HDI-M and lower FHS coverage improved the most.

However, less than half of the assessed teams had adequate infrastructure to treat people with syphilis and, when considered individually, none of the items was mentioned by more than 75% of the teams. The literature often reports on the absence and the recent improvement of adequate infrastructure in PHC 1515. Tomasi E, Cesar MADC, Neves RG, Schmidt PRC, Thumé E, Silveira DS, et al. Diabetes care in Brazil: Program to Improve Primary Care Access and Quality-PMAQ. J Ambul Care Manage 2017; 40(2 Suppl):S12-23.. This reflects the recent federal government initiatives to reduce syphilis in Brazil, applied during the PMAQ-AB period, including: implementation of rapid tests in prenatal care (2012); publication of protocol to investigate vertical transmission (2014); publication of a clinical protocol of therapeutic guidelines to manage STI and of the book of good practices and partnership with the Brazilian Federal Council of Nursing (COFEN) for the application of penicillin in PHC (2015); release of an agenda of strategic actions to reduce congenital syphilis in the country and encourage the Brazilian Ministry of Health to purchase penicillin and the publication of the technical manual for the diagnosis of syphilis (2016); and publication of a flowchart for diagnosis and treatment of syphilis (2018) 2020. Coordenação Geral de Vigilância para as Infecções Sexualmente Transmissíveis, Departamento de Condições Crônicas e IST, Secretaria de Vigilância em Saúde, Ministério da Saúde. Agenda estratégica para redução da sífilis no Brasil 2020-2021. https://www.conasems.org.br/wp-content/uploads/2020/08/3.-c-Agenda-estrategica-sifilis-CIT.pdf (accessed on 10/Aug/2021).
https://www.conasems.org.br/wp-content/u... .

A proper management of syphilis requires early detection, immediate treatment of the patient and their sexual partners, and the screening and monitoring of these partners, with rapid tests and penicillin at least 2424. Peeling RW, Mabey D, Kamb ML, Chen XS, Radolf JD, Benzaken AS. Syphilis. Nat Rev Dis Primers 2017; 3:17073.. However, although the prevalence of these items has increased between cycles, they are not universally available. These findings corroborate the literature 2626. Pinto VM, Basso CR, Barros CRS, Gutierrez EB. Fatores associados às infecções sexualmente transmissíveis: inquérito populacional no município de São Paulo, Brasil. Ciênc Saúde Colet 2018; 23:2423-32., which suggests that deficient infrastructure, insufficient human resources, and insecurity in the patient’s follow-up with the rapid reactive test and in the application of penicillin are barriers to the comprehensive care of an individual with syphilis in PHC 2525. Araújo TCV, Souza MB. Team adherence to rapid prenatal testing and administration of benzathine penicillin in primary healthcare. Rev Esc Enferm USP 2020; 54:e03645..

The Brazilian protocol for the control of STIs emphasizes the importance of, in the presence of a positive rapid test, starting treatment immediately even if the individual does not show signs and symptoms of syphilis, taking advantage of their presence at the UBS - especially if they are pregnant women, victims of sexual violence, people with a chance of loss to follow-up (who will not return to the service), people with signs and symptoms of primary or secondary syphilis, and people without a previous diagnosis of syphilis. However, treatment after the first reagent test does not exclude the need for a second test, clinical and laboratory follow-up, and diagnosis and treatment of sexual partners 88. Freitas FLS, Benzaken AS, Passos MRL, Coelho ICB, Miranda AE. Protocolo Brasileiro para Infecções Sexualmente Transmissíveis 2020: sífilis adquirida. Epidemiol Serv Saúde 2021; 30 (Esp.1):e2020616..

Although the infrastructure and the work process of health care teams for diagnosis, management, and treatment of syphilis in PHC improved, syphilis rates in Brazil showed a growing trend from 2012 to 2018, mainly in the population aged from 20 to 29 years, reaching 75.8 cases per 100,000 inhabitants in 2018 3636. Secretaria de Vigilância em Saúde, Ministério da Saúde. Sífilis, 2019. Boletim Epidemiológico 2019; V(Número Especial). http://www.aids.gov.br/pt-br/pub/2019/boletim-epidemiologico-sifilis-2019.
http://www.aids.gov.br/pt-br/pub/2019/bo... . Studies suggest that syphilis rates increased because of improved access to health services, diagnosis, and treatment, as well as changes in the registration of cases 3636. Secretaria de Vigilância em Saúde, Ministério da Saúde. Sífilis, 2019. Boletim Epidemiológico 2019; V(Número Especial). http://www.aids.gov.br/pt-br/pub/2019/boletim-epidemiologico-sifilis-2019.
http://www.aids.gov.br/pt-br/pub/2019/bo... ,3737. Benedetti MSG, Nogami ASA, Costa BB, Fonsêca HLF, Costa IS, Almeida IS, et al. Sexually transmitted infections in women deprived of liberty in Roraima, Brazil. Rev Saúde Pública 2020; 54:105.. Nonetheless, the importance of tracking and monitoring cases and contacts to reduce the transmission of the bacterium is still unreported. Health surveillance is essential for the notification and epidemiological investigation of cases, and together with the PHC team, especially community health agent (ACS), it can develop strategies to break the transmission chain 3838. Domingues CSB, Lannoy LH, Sareceni V, Cunha ARC, Pereira GFM. Protocolo Brasileiro para Infecções Sexualmente Transmissíveis 2020: vigilância epidemiológica. Epidemiol Serv Saúde 2021; 30(Esp.1):e2020549.. Actions for infected individuals and their sexual partners which seek to reduce infection and reinfection and provide early diagnosis, monitoring, completeness of drug treatment, and guidance on the subject are essential for the integral care of these individuals, possibly reducing the high number of cases.

This study strengths include its scope, addressing three moments in time based on national PHC data, and the relevance of its subject, which still has limited literature. Regarding limitations, the relationship of adequate infrastructure and work process with the care received by users with syphilis in PHC could not be analyzed since data on these individuals is unavailable in the PMAQ-basic healthcare. Moreover, Cycle I could have had selection bias considering that, as the first cycle, only the best teams in the municipalities might have joined it.

To the Brazilian Ministry of Health for funding.

Figure 1   Prevalence of items related to the infrastructure and work process for syphilis diagnosis, management, and treatment. PMAQ-AB, Brazil, 2012, 2014, and 2018. 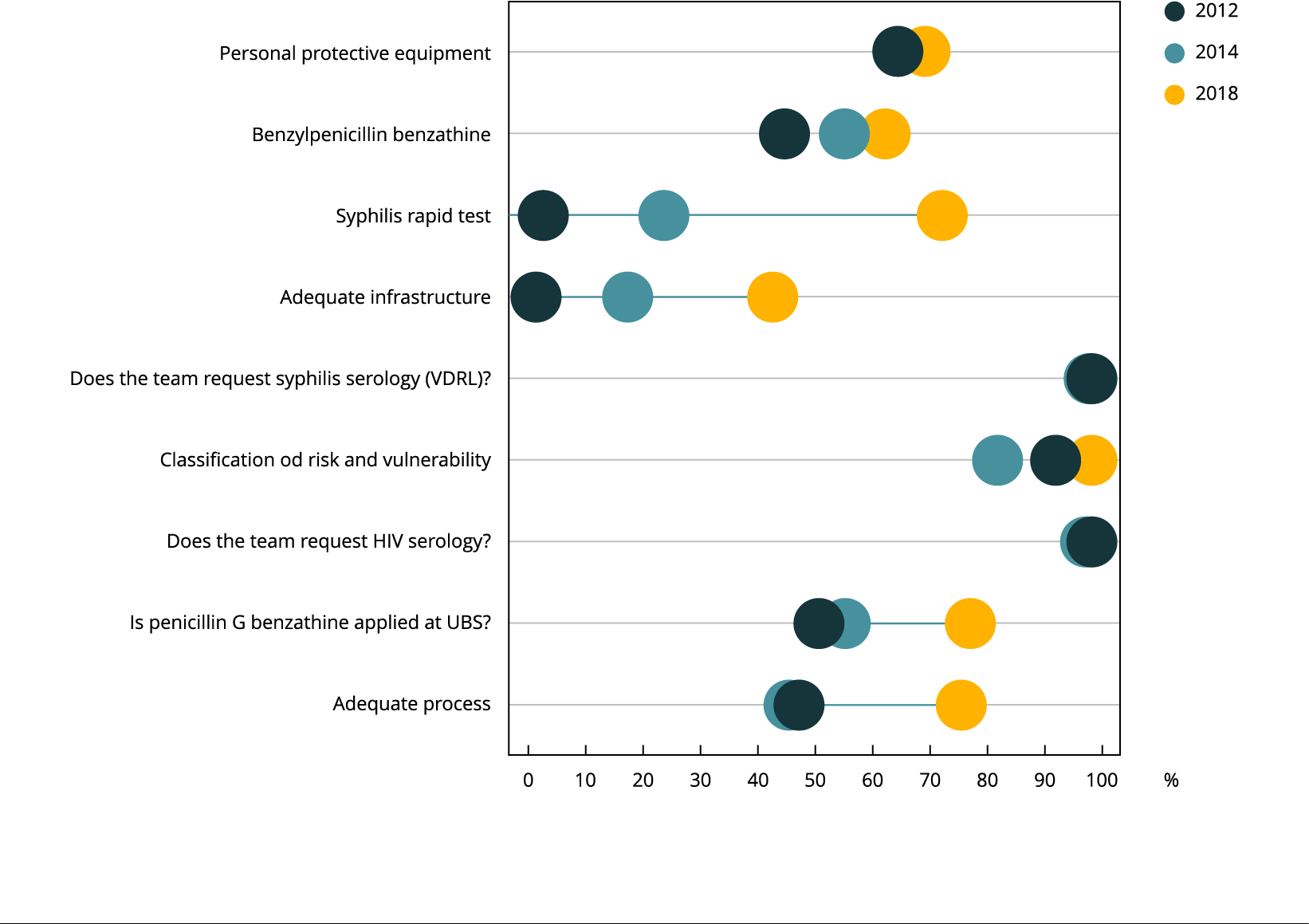