Effects of a 16-week physical training on clinical outcomes in patients with hypertension and chronic kidney disease: NEPHROS post-trial follow-up

The NEPHROS is a randomized controlled trial which applied a 16-week aerobic and resistance training to patients with chronic kidney disease (CKD) and high blood pressure. This report describes a long-term post-trial follow-up, comparing survival, health-related quality of life (HRQoL), and estimated glomerular filtration rate (GFR) change between the intervention and control groups according to in-trial cardiovascular risk factors. Three years after the original trial, NEPHROS participants were re-evaluated. Cox proportional hazards model was used to compare survival time and linear regression for changes in GFR and physical and mental HRQoL summary scores between intervention and control groups according to age, sex, and in-trial GFR, C-reactive protein, glucose, lipids, ankle-brachial index (ABI), functional capacity, and blood pressure. Of the 150 participants of NEPHROS, 128 were included in the long-term analysis. The previous exercise training had no effects on survival, GFR, or HRQoL. Baseline in-trial GFR (HR = 0.95, 95%CI: 0.92; 0.98) and ABI (HR = 0.03, 95%CI: 0.002; 0.43) were positive independent predictors for survival. Lower ABI (coefficient = 9.00, 95%CI: 0.43; 17.5) and higher systolic blood pressure (coefficient = -0.13, 95%CI: -0.24; -0.03) were independent predictors for GFR decline. A 16-week exercise program had no long-term effect on survival, quality of life, or glomerular filtration in patients with CKD stages 2 to 4. Lower GFR and ABI and higher systolic blood pressure were associated with poorer prognosis among CKD patients.

This study reports a long-term post-trial follow-up of participants of the NEPHROS randomized controlled trial, in which CKD patients from stages 2 to 4 underwent a 16-week aerobic and resistance training. The exercise was associated with decreased high sensitivity C-reactive protein and fasting plasma glucose, and increased functional capacity, with no effects on estimated GFR (eGFR) decline, different than usual care 1212. Barcellos FC, Del Vecchio FB, Reges A, Mielke G, Santos IS, Umpierre D, et al. Exercise in patients with hypertension and chronic kidney disease: a randomized controlled trial. J Hum Hypertens 2018; 32:397-407.. The main objective of this follow-up was to analyse the effects of the exercise intervention and baseline cardiovascular disease risk factors on survival, quality of life, and CKD progression.

Summary description of the NEPHROS trial

The inclusion criteria were non-diabetic patients over 18 years old diagnosed with high blood pressure and with eGFR between 15 and 59mL/minute/1.73m2 or proteinuria above 300mg in 24 hours. Exclusion criteria were patients with severe disability or amputated lower limbs without prosthesis, a history of acute myocardial infarction in the last 6 months, and previous kidney transplantation.

The medical records of about 8,000 hypertensive adults registered in 17 primary health care units in the municipality of Pelotas, Rio Grande do Sul State, Brazil, were reviewed and 935 eligible patients were identified. A total of 114 individuals were excluded and 671 refused to participate, whereas 150 were included in baseline measurements and randomly allocated to the exercise group (n = 76) or the control group (n = 74). The study protocol was approved by the Ethics Research Committee of the Federal University of Pelotas (UFPEL; approval n. 01/11), affiliated with the Brtazilian National Research Council; and with the 1964 Declaration of Helsinki and its later amendments or comparable ethical standards. All included patients signed an informed consent form, and Clinical Trial Registration (NEPHROS - NCT01935297, https://clinicaltrials.gov/).

The outcome variables were measured eight weeks after enrollment and by the end of the intervention (16th week). The intervention included 60-minute aerobic and resistance training three times a week. The control group received usual care. After the intervention, patients of both groups were advised to maintain regular exercise according to their capacity and available resources, such as walking, jogging, cycling, or swimming for at least 30 minutes, 5 days a week. Additional details about the trial have been published previously 1111. Barcellos FC, Santos IS, Mielke GI, del Vecchio FB, Hallal PC. Effects of exercise on kidney function among non-diabetic patients with hypertension and renal disease: randomized controlled trial. BMC Nephrol 2012; 13:90.,1212. Barcellos FC, Del Vecchio FB, Reges A, Mielke G, Santos IS, Umpierre D, et al. Exercise in patients with hypertension and chronic kidney disease: a randomized controlled trial. J Hum Hypertens 2018; 32:397-407..

All 150 patients included in the randomized controlled trial in control or intervention groups were searched for three years after the baseline assessment. The initial approach was by telephone, followed by outpatient clinic evaluation. Patients who were still alive were invited for serum creatinine measurement and HRQoL evaluation and questioned about regular physical activities and exercise with the following question: “Do you currently practice any type of exercise or sport regularly (i.e., 2 or 3 times a week?)”.

The time and cause of death were obtained from relatives by telephone calls. NEPHROS participants who were declared dead by relatives and those whose relatives could not be located were searched for in the public death registry system.

Plasma creatinine was measured using the Jaffe method and Roche chemicals in the same laboratory by an examiner blind to the subjects’ allocation. The GFR was estimated using the Chronic Kidney Disease Epidemiology Collaboration (CKD-EPI) equation. The difference between the GFR estimated 35 months after the intervention and the mean of the 3 in-trial GFRs was considered a long-term change in GFR.

The mean of the variables during the trial (in-trial) was compared between survivors, non-survivors, and patients lost to the three-year follow-up by ANOVA, Kruskal-Wallis test, or chi-square test (χ2). The association of intervention status (exercise or control group) and cardiovascular disease (CVD) risk factors with outcomes was initially tested by Kaplan-Meier curves with log-rank test (categorical predictors), univariate Cox proportional hazards (continuous predictors), or univariate linear regression analysis. After collinearity was discarded, differences in distribution of baseline characteristics according to the intervention status (intervention or control group) with p ≤ 0.25 were considered potential confounders and included in the multivariable model to test the exposure to exercise. Cox proportional hazards regression was used for adjusted survival analysis. Linear regression was used for adjusted analysis of change in GFR and HRQoL. All predictors with p ≤ 0.25 were initially included in the models. The assumptions for Cox (proportionality) and linear regression (normality and homoscedasticity of residuals, collinearity, and linearity) were tested. Variables were tested for normality using the Shapiro-Wilk test. In case of skewed distribution, commands (ladder and gladder) were used to suggest transformation options that provided parametric distribution. After the regression, residual distribution was tested using graphical methods. A p-value < 5% was considered as significant. All statistical analyses were performed using Stata software v. 15.1 (https://www.stata.com).

After 1,028.78 (standard error - SE = 23.88) days from the trial inception, 128 patients or relatives were located, of which 23 refused to reevaluate GFR and HRQoL. All located patients were included in the survival analysis and 105 in the linear regression analysis for changes in GFR and HRQoL (Figure 1).

Table 1 summarizes the baseline characteristics of the sample in the randomized controlled trial according to the survival status at follow-up. Participants had a mean age of 65 years and were mostly white women, overweight or obese (mean BMI = 29.9, SE = 0.7kg/m2), and with slightly reduced renal function (eGFR = 63.4, SE = 2.3mL/minute/1.73m2). No significant in-trial differences were found between the patients included in the survival analysis and those with loss of follow-up (Table 1).

Thumbnail
Table 1
Sample characteristics at baseline (in-trial), according to the main outcome (survival status) 35 months after the NEPHROS trial.

Of the 128 patients initially located, 13 died (10.2%) after 3 years (7 in the intervention group and 6 in the control group), of which 2 were related to cancer, 4 to cardiovascular disease, and the others to unidentified causes. The patients died after a mean of 764.58 (SE = 11.1) days after randomization. Figure 2 shows the three-year survival probability after the trial. No differences were found in survival between the NEPHROS control (no-exercise) and intervention (exercise) groups (log-rank test, p = 0.94) in univariate intention-to-treat analysis (Table 2 and Figure 2). The per-protocol analysis, which included only patients who attended more than 70% of the exercise sessions during the trial, had similar results (data not shown). During the 32-month post-trial follow-up, no participant declared to maintain regular exercise.

Thumbnail
Table 2
Results of the follow-up evaluation (35 months) and changes in the in-trial measures over time.
Thumbnail
Figure 2
Kaplan-Meier survival estimates according to intervention or control randomization group in the NEPHROS trial.

Thumbnail
Figure 3
Predicted hazard ratio (HR) for death until 35 months after the intervention according to ankle-brahila index (ABI) and glomerular filtration rate (GFR) means during the in-trial follow-ups (from Cox regression analysis).

This NEPHROS post-trial follow-up investigated the effects of a structured exercise intervention and in-trial cardiovascular disease risk factors on all-cause mortality, GFR, and health-related quality of life in a hypertensive CKD population. Patients who underwent physical training and control patients had no differences in survival or in GFR and HRQoL after a mean of 35 months, despite the short-term positive effects of exercise on functional capacity, metabolism, and inflammatory factors.

The GFR remained mostly stable after the almost three years of follow-up possibly because of the sample, which included older hypertensive and non-diabetic patients, most without proteinuria. Higher systolic blood pressure and lower ABI were associated with a greater decline in GFR. Uncontrolled blood pressure is greatly associated with a faster progression of chronic kidney disease 55. Peralta CA, Norris KC, Li S, Chang TI, Tamura MK, Jolly SE, et al. Blood pressure components and end-stage renal disease in persons with chronic kidney disease: the Kidney Early Evaluation Program (KEEP). Arch Intern Med 2012; 172:41-7., but the role of ABI has been less investigated. An analysis of the Framingham Heart Study 3838. Foster MC, Ghuman N, Hwang SJ, Murabito JM, Fox CS. Low ankle-brachial index and the development of rapid estimated GFR decline and CKD. Am J Kidney Dis 2013; 61:204-10. and the Atherosclerosis Risk in Communities (ARIC) study cohorts has already described this association for the general population 3939. O'Hare AM, Rodriguez RA, Bacchetti P. Low ankle-brachial index associated with rise in creatinine level over time: results from the atherosclerosis risk in communities' study. Arch Inter Med 2005; 165:1481-5.. The ankle-brachial index is a surrogate of atherosclerotic burden, which acts as predictor of both death and GFR decline and emphasizes the interrelated nature of cardiovascular and kidney diseases, especially in older adults, even after adjustment for classical risk factors. The lack of a baseline quantitative measure of albuminuria, a known risk factor for CKD progression, greatly limits our findings. The use of antihypertensive drugs has also not been recorded. Furthermore, around one sixth of the sample could not be located and another one sixth had not its GFR estimated in the final assessment. Finally, this follow-up study can be significantly underpowered. However, since we followed best-practice and current recommendations and used secondary analyses, the interpretation of our findings was based on the direction and magnitude of the associations. The predictive power of ABI for survival and the GFR decline in earlier stages of CKD should be especially investigated in future properly designed and powered studies. If confirmed the role of ABI, chronic kidney disease in older hypertensive patients could be nearer from the cardiovascular disease constellation than is currently estimated.

The strengths of this study include the focus on patient-oriented outcomes, such as survival and quality of life, based on a comprehensive set of baseline in-trial data measured thrice each, with participants subjected to clinical and laboratory analysis at follow-up, contrary to analysis of secondary data from multipurpose databases. To the best our knowledge, no previous post-trial follow-up of exercise in CKD patients assessed clinical endpoints. Although research is still incipient, short-term benefits of exercise on surrogate endpoints for CKD patients do not imply long-term advantages in patient-oriented outcomes if infrastructure and life-course educational and motivational support are not provided for a healthy lifestyle.

The authors declare that they have no conflict of interest. 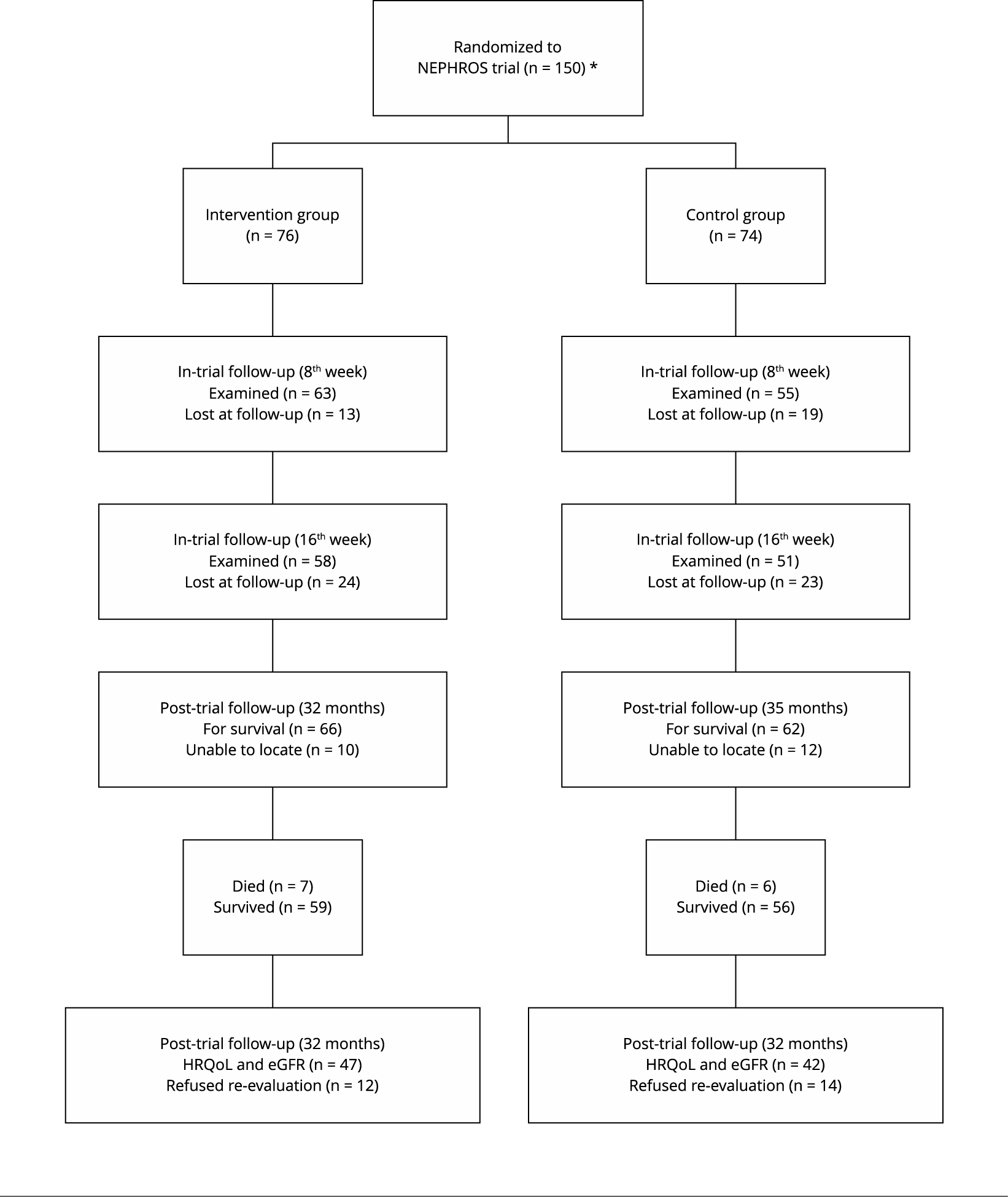 Figure 2   Kaplan-Meier survival estimates according to intervention or control randomization group in the NEPHROS trial.

Figure 3   Predicted hazard ratio (HR) for death until 35 months after the intervention according to ankle-brahila index (ABI) and glomerular filtration rate (GFR) means during the in-trial follow-ups (from Cox regression analysis). 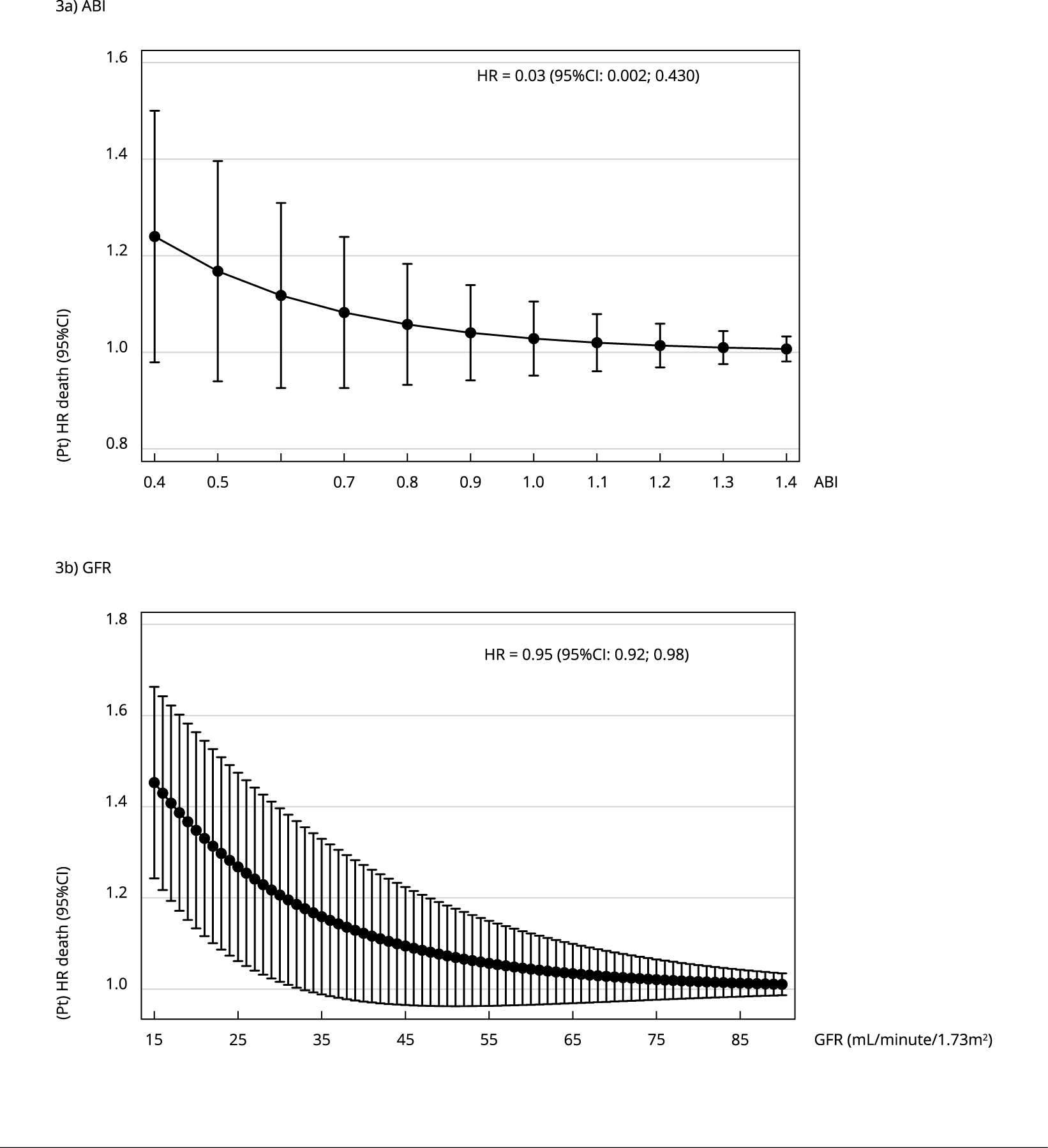 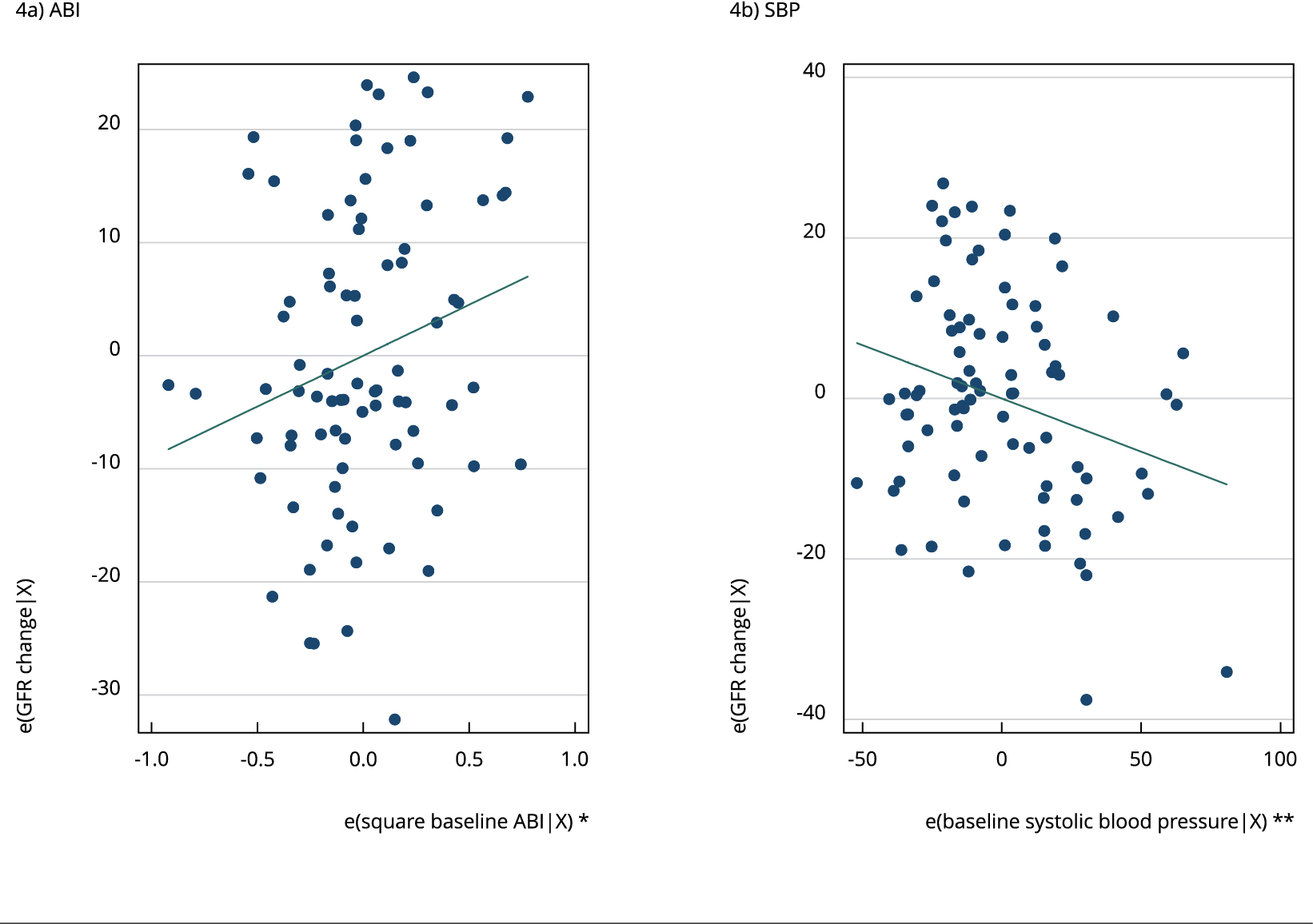 Table 1   Sample characteristics at baseline (in-trial), according to the main outcome (survival status) 35 months after the NEPHROS trial.

Table 2   Results of the follow-up evaluation (35 months) and changes in the in-trial measures over time.