Objectives: Low participation rates in the selection of population controls are an increasing concern for the validity of case-control studies worldwide.
Methods: We conducted a pilot study to assess two approaches to recruiting population controls in a study of colorectal cancer, including a face-to-face interview and blood sample collection. In the first approach, persons identified through a population roster were invited to participate through a telephone call by an interviewer telephoning on behalf of our research center. In the second approach, individuals were identified from the lists of selected family practitioners and were telephoned on behalf of the family practitioner.
Results: When the second method was used, participation rates increased from 42% to 57% and the percentage of refusals decreased from 47% to 13%. The reasons for refusing to participate did not differ significantly between the two methods.
Conclusions: Contact through the family practitioner yielded higher response rates in population controls in the study area.

In many industrialized countries, there is a general perception that achieving high response rates in surveys is increasingly difficult1. An evaluation of 355 original epidemiological articles published in 10 high impact journals found that average participation in epidemiological studies has fallen in the last 30 years and that this decrease has particularly affected controls in population-based studies2. In recent years, response rates among population controls of around 50% have not been uncommon. Because of the difficulties in achieving high response rates and the potential biases resulting from self-selection, understanding the reasons for non-response and the application of methods for limiting non-response is indispensible.

Within the framework of the Health Impacts of Long Term Exposure to Disinfection By-Products in Drinking Water (HI-WATE) project, we conducted a population-based case-control study in Spain to assess the risk of colorectal cancer associated with long-term exposure to disinfection by-products, including examination of gene-environment interactions.

Cases were defined as patients with histologically-confirmed colorectal cancer aged between 20 and 85 years and living in the catchment area of one of the participating hospitals (Hospital del Mar, Barcelona). Controls consisted of persons living in the catchment area of the participating hospital, who were individually matched by age (±5 years) and gender to cases.

We used two methods to identify and contact potential controls:

- Method 1: a list of persons living in the study area was provided by the Central Registry of Health Insured People in Catalonia (Spain) of the Catalan Health Service. This list included men and women between 20 and 85 years old, with information on gender, date of birth, complete address of residence, name, family names and telephone number. The interviewers selected potential controls from the list matched by gender and age to cases, who were contacted telephonically on behalf of the research center and invited to participate.

The protocol for telephone contact was the same in both methods. We selected five persons as potential controls matched by age and gender to each case, who were telephoned in the order they were selected. Responses to the telephone call were grouped into three categories: 1) the person was reached; 2) the telephone was engaged, or the answering machine responded or nobody picked up the telephone; in this case, we made up to five further attempts; 3) the telephone number was wrong; in this case we checked the number in the telephone directory. Potential controls were telephoned consecutively according to the response of the previous person. The reasons for selecting a subsequent person on the list were refusal to participate or wrong contact information. People who accepted to participate were invited to the primary care center close to Hospital del Mar for an interview and blood extraction. If people refused to go to the primary care center, we offered to visit them at their homes.

Our aim was to recruit 40 controls using each method. Response rates were calculated using the method described by Slattery et al3. Briefly, in the numerator we counted interviewed individuals, and in the denominator we included these individuals, as well as persons who refused to participate and individuals that could not be contacted.

When method 1 was used, 90 persons were contacted and invited to participate in the study as potential controls (Table 1). Among the seven persons identified as not eligible, two had a previous diagnosis of colorectal cancer and five did not live in the hospital's catchment area. Among the 83 eligible individuals, 35 accepted to participate in the study and were interviewed (42% response rate) and 39 (47%) refused to participate. An average of 6.5 telephone calls was required to recruit one control. Among the 74 persons contacted, 35 (47%) accepted to participate. The aim of the study was to recruit 40 controls per method, taking into account that we had a list of five persons for each control. The final difference between method 1 and method 2 was due to the fact that we had to call fewer persons to recruit the 40 controls.

When the second method was used, 80 individuals were identified from the family practitioner's list and were contacted to participate as potential controls. Among these, 10 were not eligible. The response rate was 57% and the refusal rate was 13%. The main problem with the family practitioner's list consisted of difficulties in contacting the potential controls. With method 2, 30% of the persons could not be contacted, mainly due to incorrect telephone numbers in the registry (Table 1). Among the 49 persons contacted, 40 (81%) accepted to participate.

The differences in participation rates between the two recruitment methods were statistically significant (chi-square test: 22.94; p<0.05).

When method 1 was used, 47% of the persons contacted refused to participate in the study. The main reason for refusal (25% of total refusals) was not having time or having to travel too far to reach the primary care center for the interview (distance/time). Almost 21% of the persons contacted refused to participate without giving a specific reason. The third reason for refusal, accounting for 20% of the total, was refusal by the person answering the telephone, usually a relative (Table 2). No differences were observed in reasons for refusal by gender. Stratification by age showed that the main reason for refusal among the youngest people (age<65 years) was the distance/time, accounting for 63% of refusals. In the older group (age>65 years), 26% of individuals gave no reason and 19% of refusals were made by a relative. 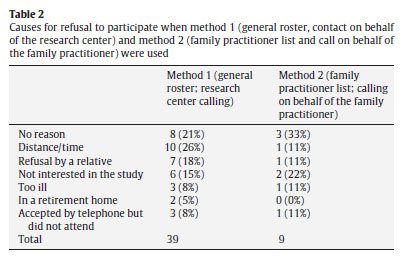 When method 2 was used, only nine persons (13%) out of the 49 contacted refused to be interviewed. One-third (34%) gave no specific reason, while 22% reported not being interested in the study (Table 2). The remaining persons (n=4) mentioned different reasons for refusing to participate. In the stratification by age, only two persons were aged 65 years or less, one reported not being interested in the study and the other accepted to be interviewed by telephone, but did not attend the appointment. Persons older than 65 years mainly refused to be interviewed without giving a specific reason (43%).

We conducted a study to assess two approaches to recruiting population-based controls and found that contact through the family practitioner provided higher response rates in population controls in the study area (57%) compared with contact via a general population register (42%). The reasons for refusal were similar in both methods and differed by age.

Our response proportion was slightly higher than that reported by Stang et al4 in 2005, in a study in Germany (53%), although the recruitment method differed slightly from our own. We only used telephone calls, while the first approach in the German study used a letter and only persons not responding after a second written invitation were telephoned. We could not assess the characteristics of non-respondents apart from sex, age and reason for refusal.

In 2008, Ruano-Ravina et al5 conducted a case-control study in Spain of recruitment of population controls and compared the response rates with hospital controls. These authors reported response rates for population controls of 61.6% and 100% for hospital controls, although there was no description of the method used to calculate these response rates. The main difference with our study was that the interviews were conducted at home, and people were not asked to attend the primary health center, unlike in our study. Similarly, another study in Cornellà (Barcelona) reported a response rate of 64.3% for a telephone interview conducted within the framework of a cohort study6. In recent years, achieving high response rates in surveys has become increasingly difficult in many industrialized countries7. An evaluation of 355 original epidemiological papers published in 10 high impact journals found that average participation in epidemiological studies has fallen in the last 30 years and that this decrease has particularly affected controls in population-based studies2. In recent years, response rates among population controls of around 50% have not been uncommon.

This is one of the first studies to explain in detail the entire process of recruiting controls, unlike most of the studies published in the literature. The response rates obtained in recruiting population controls were moderate. Although recruitment of population controls is more time consuming than that of hospital controls, validity is believed to be higher through avoidance of selection bias8.

The higher response rate obtained with method 2 can be attributed to the involvement of the family practitioner, even though this involvement was indirect, compared with the more anonymous method 1. In view of the response rates obtained in this study, we decided to recruit population controls in the main study by using the second method. In addition, if the errors in the contact telephone numbers in the lists of family practitioners tended to be random (a hypothesis that is probable but which we could not test), the response rates for method 2 would have been much higher, since 23% of persons with errors should have been identified as not eligible. The reason for this high percentage of errors, according to the family practitioner and the director of the primary health center, was that the area has high rates of migration and considerable population movement.

Our results show that participation rates of population controls in case-control studies could increase through the use of recruitment methods that include personalized contacts, such as family practitioners.

The authors have no conflict of interest to declare.