This work was financed by grants from the Consellería de Sanitat de la Generalitat Valenciana B12/03 and B15/04.

Objective: A rebound of syphilis cases has recently been observed. This study describes the trend in syphilis infection among persons attending the AIDS information and prevention center of Valencia, Spain.
Methods: We performed a cohort study of all persons attended from 2000 to 2006. The calendar effect was assessed by a logistic regression model adjusted by sexual and sociodemographic variables.
Results: A total of 71% were heterosexuals (HT) and 19% were men who had sex with men (MSM). Among the 10,850 users of the center, the prevalence of syphilis was 0.7%. Among MSM, the prevalence of syphilis was 2.4% for the whole period and was 4.6% for 2006. Multivariate analysis showed that the risk of infection was lower in persons with a university education (OR=0.10; 95%CI: 0.03-0.59) than in those without. The risk was higher in persons who took drugs (OR=5.49; 95%CI: 1.55-19.43) or who practiced prostitution (OR=6.83; 95%CI: 2.52-18.53). In 2006, the risk of having syphilis was greater (OR=5.05; 95%CI: 1.12-22.72).
Conclusions: Syphilis infection increased substantially among MSM. In this collective, the prevalence of infection is related to educational level, prostitution and the use of non-injected recreational drugs.

A rebound of syphilis cases has recently been observed in various European countries, the United States and Canada1-4, especially from 2000 onwards. This increase is associated mainly with men who have sex with men (MSM)5 and could also be related to an increase in the incidence of HIV2,6,7. Several hypotheses have been formulated to explain this increase. On the one hand, the spread of combined antiretroviral therapy and its effect of improving survival has increased the number of HIV infected people who maintain active sexual relationships8. On the other hand, in the last few years, there has been a relaxation in the use of preventive measures for risky sexual relationships among MSM9,10, which is also associated with an increase in the use of non-injected recreational drugs such as ecstasy, etc.11. Therefore, sexually transmitted infections could be increasing in parallel with an increase in HIV transmission12. In Spain, epidemiological surveillance of sexually transmitted diseases is far from exhaustive, although data can be obtained from both the Notifiable Diseases Surveillance System and the Microbiological Information System, the latter gathering information nationally from a network of laboratories in different regions. Aside from the quality of the surveillance system, a change in the trend from 2003 onwards has been observed, with an increase in syphilis incidence.

The objective of this study was to describe the trend in syphilis infection in the last few years among persons attending the AIDS Information and Prevention Center (CIPS) in Valencia, Spain.

A cross-sectional study was carried out, with all persons making a first visit to the AIDS Information and Prevention Center in Valencia, the third largest city in Spain, from 2000 to 2006 and who reported being at risk of transmission either through HIV infection or by another sexually transmitted diseases such as syphilis. AIDS Information and Prevention Centers are public health centers located in several cities of the autonomous region of Valencia, established by the regional government by the end of 1987. People access these centers either spontaneously or are referred by other health or social centres. These centers provide free, confidential free information and counseling about HIV/AIDS and also carry out serological tests for HIV, hepatitis A, B and C viruses, and syphilis. Before serological testing with blood extraction is performed, a personal face-to-face interview is carried out by health professionals to gather information on different sociodemographic variables and risk practices. Clinic attendees receive pre- and post-test information and counseling on HIV preventive measures. Attendees are also offered vaccination against hepatitis A and B viruses. Persons reporting HIV risk behaviors are invited to attend the center every 6 months. All persons attending the center are tested to determine the presence or absence of antibodies to HIV at distinct visits.

To determine the presence of HIV antibodies, enzyme immunoanalysis (ELISA) was used, while the Western Blot test was employed to confirm positive results. Indirect diagnostic techniques, based on antibody detection within the patient's serum, were used for syphilis diagnosis. Firstly, a non-treponemic test of macroscopic flocculation, Rapid Plasma Reagin (RPR, Card Antigen, Becton-Dickinson), with high sensitivity but low specificity was used. If a positive result of this test was obtained, a treponemic test, Elisa IgG (Treponema screen Liason, Sorin Biomedica) was used to confirm the presence of infection. A case of syphilis was diagnosed when both tests showed a positive result. In cases of discrepancy, a second test was performed, repeating the RPR and using a second treponemal test, FTA-ABS (climb-Spot-IF, BioMerieux). The antibody titers of the non-treponemic tests were established quantitatively, and a quadruple change in the titer was considered to show a substantial difference between the results of the two tests. Cases and the percentage of syphilis per year were described according to the characteristics and sexual risk practices of the persons visiting the AIDS Information and Prevention Center during the study period.

The calendar effect was assessed by a logistic regression model adjusted for sexual and sociodemographic variables. The presence of an interaction between adjusted variables and calendar period was investigated. Since measurements for subjects differed over time and were not independent, we used a robust estimate for the confidence intervals presented. A likelihood test was used to include variables with a p-value of 0.05 or less. We used STATA 9.0 for the data analysis.

Among the 10,850 subjects attending the AIDS Information and Prevention Center, the overall prevalence of syphilis was 0.7%. No substantial changes were observed in the study period, except for 2006 when the percentage of subjects with syphilis reached 1.4%. Among persons attending the AIDS Information and Prevention Center, 71% were heterosexuals (HT), 19% were MSM and 10% were injecting drug users (IDU). Over the years, the proportion of HT increased from 63% in 2000 to 75% in 2006, implying a reduction in cases among IDU from 19% to 5%. The proportion of MSM was stable for the whole period. HIV coinfection was found in 6.3% of MSM and 2.5% of HT diagnosed with syphilis. 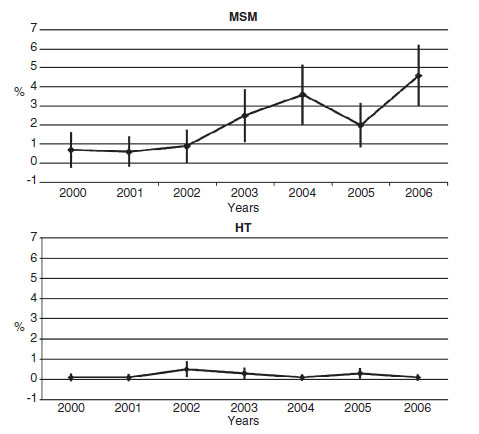 Figure 1. Trend in the prevalence (%) of cases of syphilis infection
by risky sexual practice in men who have sex with men (MSM)
and heterosexuals (HT) first attending the AIDS Information
and Prevention Center between 2000 and 2006.

A total of 1,475 MSM attended the center during the study period, but syphilis serology was only available for 1,387. These subjects made a total of 2,360 visits. For all these visits an exhaustive analysis of declared sexual activities and drug use was carried out to assess the association of these practices with infection.

After fitting a univariate logistic regression model, we observed that the risk of having syphilis was higher for men who practiced prostitution (OR=10.64; 95%CI: 4.22-26.85), as well as for those who reported use of non-injected recreational drugs (ecstasy, methamphetamine, etc.) (OR=4.63; 95%CI: 1.37-15.66). The highest risk was observed for 2004. A lower risk was observed among MSM with high educational level (table 1).

Cases of syphilis infection substantially increased among MSM attending the AIDS Information and Prevention Center, especially in recent years, with no major variations in the percentage of MSM who took distinct serological tests. The prevalence of syphilis infection was related to educational level, prostitution and the use of non-injected recreational drugs.

A similar increase has been identified in several European countries and the USA3,6,13. Moreover, a rise in risky behavior among MSM was evidently related to the use of psychotropic substances and unprotected sexual practices, which may favor the increase in infection14. The rise in syphilis cases in Spain has also been described by a growing trend in the number of cases during the last few years15. An increase in the incidence of syphilis among male homosexuals was detected in a study carried out in a center for sexually transmitted infections in Madrid16 and in several studies carried out in Barcelona10,17. The increase in the number of subjects who sought counseling at the AIDS Information and Prevention Center regarding risk practices in their heterosexual relations was not accompanied by an increase in the number of syphilis cases, as occurred in other cities such as Amsterdam18.

Several studies have established associations between sociodemographic variables and the risk of HIV infection among MSM. Men with a low educational level evidently have a greater probability of engaging in risky sexual relations and therefore an increased probability of being infected. However, the relationship between sociodemographic variables and syphilis is less clear. Although we found no significant differences, our data indicated that the number of syphilis cases was greater among men who had not completed primary education. Several studies have shown that the use of drugs, such as meta-amphetamine or designer drugs, increases the probability of having unprotected sexual relations without proper use of condoms and also increases the number of partners14,19,20. This behavior has been associated with an increase in the risk of syphilis infection.

This study has certain limitations related to selection bias among persons attending the AIDS Information and Prevention Center, mainly due to changes in the characteristics of the subjects requesting the services of this center. When established, the center was one of the few places where the HIV test could be carried out anonymously and for free. The AIDS pattern has gradually changed, and the HIV test has been incorporated into the public health system. The AIDS Information and Prevention Center has always been the referral center for most IDU starting a drug use cessation program, as they were referred to the center for HIV testing. Changes in the characteristics of this group are related to changes in the characteristics of the IDU population and therefore selection bias should be relatively small. For other risk practices, changes in the location of the AIDS Information and Prevention Center could account for alterations in the user pattern. However, the center has been at the same place for the last 6 years and therefore an increase in syphilis cases among MSM could not be explained by location changes alone. Moreover, although figures on infection do not reflect the real prevalence or incidence, we believe that the stability and accessibility of this center allowed us to identify trend changes.

The phenomenon of the increase in syphilis cases and the HIV/AIDS epidemic is not homogeneous. Both local and general plans are required to identify distinct priorities and take decisions that are appropriate to each real-life scenario. The increase observed justifies the need to improve surveillance systems and to accompany these measures with preventive actions so that intervention mechanisms are directed toward the target population in which they will be most effective. For this reason, more active and specific preventive actions should be implemented in venues such as saunas and bars or places where MSM visit to contact possible sexual partners in order to inform this collective about possible hazards and the increase in new infections.

7. Marcus U, Kollan C, Bremer V, et al. Relation between the HIV and the re-emerging syphilis epidemic among MSM in Germany: an analysis based on anonymous surveillance data. Sex Transm Infect. 2005; 81:456-7.

23. Hurtado I, Alastrue I, Ferreros I, et al. Trends in HIV testing, serial HIV prevalence and HIV incidence among persons attending a center for AIDS prevention from 1988 to 2003; increases in HIV incidence in men who have sex with men in recent years?. Sex Transm Infect. 2007; 83:23-8.