Nitrate and trace elements in municipal and bottled water in Spain

Objectives: To describe levels of nitrate and trace elements in drinking water from the study areas of a multicase-control study of cancer in Spain (MCC-Spain).
Methods: A total of 227 tap water samples were randomly collected from 67 municipalities in 11 provinces and the nine most frequently consumed bottled water brands were sampled to measure levels of nitrate, arsenic, nickel, chromium, cadmium, lead, selenium and zinc.
Results: The median nitrate level was 4.2mg/l (range<1-29.0), with similar levels in rural and urban municipalities (p=0.86). Trace elements were unquantifiable in 94% of tap water samples. Differences between areas were significant for nitrate (p<0.001) and arsenic (p=0.03). Only nitrate was quantifiable in bottled water (range 2.3-15.6mg/l).
Conclusions: Nitrate levels in municipal water differed between regions and were below the regulatory limit in all samples, including bottled water. Trace element levels were low and mainly unquantifiable in tap and bottled water.

Nitrate and trace elements have been associated with diverse health effects. One of the main routes of human exposure is water ingestion.1 Some of these elements are naturally ubiquitous and mobile in the environment, but can accumulate in soils and water sources due to the use of fertilizers, industrial emissions and other human activities.2

Nitrate is classified as a probable human carcinogen under conditions that result in endogenous formation of N-nitroso compounds.3 Arsenic, cadmium, chromium (IV) and some nickel compounds are recognized carcinogens and cause other health effects.4 Lead is neurotoxic and selenium and zinc have a likely inverse relationship with gastric, prostate and breast cancer.5 Nitrate and many trace elements are regulated in the European Union, Spain, the United States and other countries. Although zinc is not regulated, water containing > 3mg/L of zinc is not acceptable for human intake.6 Systematic and published information on levels in Spain is limited and the available data are restricted to specific areas or small study populations.

We aimed to describe levels of nitrate and trace elements in tap and bottled water in the study areas of the Spanish Multicase-Control study of Cancer (MCC-Spain). Our ultimate goal was to provide relevant information for expossure assessment to water contaminants in this population.

A descriptive analysis was conducted within the framework of the MCC-Spain study, carried out in 11 Spanish provinces (table 1), with 53 urban and 14 rural municipalities (<5000 inhabitants) according to population records in 2010.

Tap water samples were collected between March and July 2010 in 227 randomly selected locations (households and public buildings). The number of samples per area was defined according to the number of person-years included in the MCC study. Sampling procedures followed a common protocol. In January 2011, we purchased a 500mL bottle of the nine most frequently consumed brands in Spain, according to the National Association of Bottled Water Companies.

Differences between study areas were tested with the Kruskall Wallis rank test. Nitrate levels were compared between urban and rural municipalities in provinces where both types of municipality were sampled (Cantabria, Leon and Navarre) by applying the Mann Whitney U test.

Nitrate was quantified in 222 tap water samples (97.8%). Median levels ranged from 1.4mg/L (Leon) to 10.4mg/L (Barcelona) and differences among study areas were significant (p<0.001). Most determinations in Valencia and Barcelona were in the highest quartile overall (> 7mg/L). Levels in rural and urban municipalities were similar (p=0.86). Nitrate was quantified in eight bottled water samples (88.9%) with a maximum level of 15.6mg/L (table 1).

Nitrate and trace elements were below regulatory limits in 227 municipal water samples from 11 Spanish provinces in Spain. Trace elements were under quantification limits in 94% of the samples. Significant differences among areas were observed for nitrate and arsenic. Only nitrate was measurable in bottled water samples, at concentrations below regulatory limits.

We found similar levels of nitrate in urban and rural areas. Nitrate levels are usually higher in agricultural (rural) areas. However, in urban regions, nitrate could be produced by industrial sources, wastewater and solid waste disposal.4 In addition, water supplying urban areas could be collected in rural regions. Our study had limited power to verify urban-rural differences, because most of the study areas included only urban municipalities.

We did not find nitrate levels exceeding regulatory limits in tap water, contrary to studies in France3 and Sicily,7 where 6% of 2019 samples and 4.7% of 667 samples, respectively, exceeded this limit. Our measurements are consistent with Spanish reports from Galicia8 (0-55.4mg/L in spring water) and Tenerife (mean<10mg/L in tap water).9 Our results confirm that nitrate levels differ geographically, which could be explained by several environmental factors such as water source (ground vs. surface), land use and soil characteristics, among others.1

Arsenic values were below the quantification limit in 96.5% of tap water samples, differing from Spanish reports of levels exceeding the regulatory limits (10μg/L) in Madrid10, Leon11 and Caldes de Malavella.12 The available literature shows wide variability among regions, due to natural geologic characteristics and anthropogenic sources of contamination.

Even the maximum zinc levels measured in Madrid (≈1.7mg/L) did not exceed the recommended limit to avoid toxic effects (3mg/L) and were similar to results from Finland (1.1mg/L).6 Higher concentrations of zinc, lead, chromium, nickel, cooper and iron could be observed due to release from piping and fittings. According to a study performed in the Basque country,13 this contaminant pathway is not important in Spain, which could explain the low levels found of nickel and other trace elements. Selenium was mainly unquantifiable, probably because most of the chemical forms remain fixed to soils and do not reach drinking water. Further research is needed to understand the major environmental determinants of trace element levels in drinking water, given their potential effects, possibly protective, on some cancers.5

Nitrate levels in bottled water were similar to those reported in Tenerife (range 0.4-12mg/L)10 and other European bottled waters (means from <0.04 to 18.1mg/L) analyzed in a Canadian study14 but were higher than those found in Germany (median 1.08mg/L).15 Studies from the United States and Germany15 found arsenic, cadmium, zinc, selenium and nickel exceeding regulatory levels, but our results, mostly below the regulatory limits, were also verified in other countries.

We provide broader information than that found in previous Spanish reports on water contaminants. In addition, to our knowledge, this is the first study measuring various trace elements in Spanish bottled water. Since nitrate levels in drinking water were under regulatory limits, specific recommendations about water intake are not warranted. Some implications for exposure assessment are the following: 1) geographical variability in nitrate levels should be taken into account; 2) drinking water does not appear to be an important source of exposure to trace elements in the study areas; and 3) the contribution of bottled water intake to nitrate exposure, so far considered insignificant, needs further analysis.

In conclusion, nitrate levels differ significantly among Spanish regions but are always under the regulatory limits. Trace element levels are low and are mainly unquantifiable in tap and bottled water. This information is helpful to evaluate exposure and the association of these contaminants with prevalent tumors in the Spanish population. 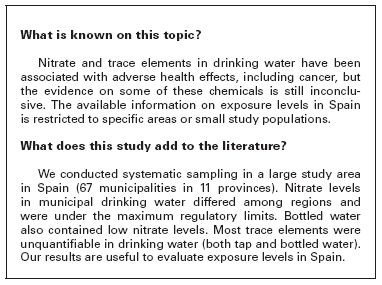 N. Espejo-Herrera performed the statistical analysis and drafted the manuscript under the supervision of C.M. Villanueva. E. Ulibarrena performed the laboratory analysis. All the authors participated in the study design, data collection, review and interpretation of the results. The final manuscript was reviewed and approved by all the authors. All members of the Water Working Group of the MCC-Spain study, listed as co-authors in the Annex, contributed to data collection, water sampling in the study areas and reviewed the results of the study.

We thank Remedios Pérez and José Luis Rodrigo (Public Health Institute of Navarre) for their contributions.

15. Birke M, Rauch U, Harazim B, et al. Major and trace elements in German bottled water, their regional distribution, and accordance with national and international standards. Journal of Geochemical Exploration. 2010; 107:245-71.