Bullying among schoolchildren: Differences between victims and aggressors

Objective: To identify the factors associated with bullying behaviors among adolescents by analyzing victims, aggressors and victims/aggressors separately.
Methods: A cross-sectional study was performed in a representative sample of 3,089 secondary school students (13-18 years old) in Barcelona (Spain). To define bullying behaviors, we used three questions about different types of mistreatment (jeering, attacking, marginalizing).
Results: Compared with secondary school students not involved in bullying, victims, aggressors and victims/aggressors were more likely to be boys and to report negative mood states. Victims were younger, were more overweight or obese and were lighter cannabis users, while aggressors were also younger but reported more antisocial behaviors and more cannabis and alcohol use. Victims/aggressors reported more antisocial behaviors and were overweight.
Conclusions: Being involved in bullying, independently of the role adopted, was associated with health-related problems, which can lead to psychological disorders in adulthood.

Bullying has been defined as an aggressive behaviour in which one or more persons intentionally try to harm another person over time, in a situation defined by a power imbalance.1 Being involved in bullying independently of the role adopted can have negative consequences such as social, emotional or psychological problems.2, 3 Being a victim may be a precursor of depression and anxiety,4 and suicidal ideation.2 Aggressors have been associated with antisocial behaviours and psychiatric disorders in adulthood.2 Overall, bullying is currently a prevalent problem among children and adolescents of all ages worldwide,5 especially within the school environment.3 Consequently, bullying has become a concern for parents, teachers and health professionals.

Most studies performed have investigated the role of specific factors, while studies that have considered the whole range of possible determinants are scarce. For this reason, the aim of this study was to analyse a wide range of potential determinants together in order to identify factors associated (including negative mood states and antisocial behaviours) with bullying behaviours among adolescents, analysing different roles separately.

A cross-sectional study was conducted among a representative sample of secondary school students aged 13-18 years old (8th, 10th and 12th grade) in Barcelona (Spain). Data came from the 2008 edition of the FRESC-survey (health and lifestyle risk factors survey) which is performed periodically by the Agència de Salut Pública de Barcelona. Its design took into consideration questions from previous editions and other validated national and international surveys. Classrooms were the sample unit and were randomly selected, stratifying by type of school (public or subsidized/private) and the socio-economic status (SES) of the school's neighbourhood (low, medium or high). Overall, 136 classrooms from 80 secondary schools were included in this study.9

Bivariate and multivariate robust Poisson regressions were performed to identify the factors associated with victims, aggressors and victims/aggressors. Non-involved students were the reference group.

Regarding involvement in bullying, 7.1% of boys reported being a victim, 11.2% reported being an aggressor and 3.3% was classified as victim/aggressor. Among girls these percentages were 4.7%, 5.2% and 1.7% respectively (Table 1).

One potential limitation of this study is that data were collected from self-reported questionnaires. Therefore, social desirability may have influenced the responses, suggesting a possible information bias. However, anonymous questionnaires for self-reported behaviours have previously been proven to have good validity and reliability.11 Another limitation is the lack of an agreed-upon scale for measuring bullying roles which hampers comparing our outcomes with those of other studies. Finally, data are cross-sectional, so it is not possible to establish causality. Despite these limitations, it should be mentioned that the sample was representative of the secondary school students in a large city in Spain.

Some studies have shown an association between victims and different risk factors such as overweight and obesity,12 psychosomatic complaints, sleeping problems, negative mood states and low self-esteem.2,5 Findings reported by the Global School-based Student Health Survey (GSHS) suggested that victims felt sad or hopeless more frequently.13 Additionally, some longitudinal studies have reported that being a victim could lead to emotional, behavioural or psychosocial problems.4,14 Similarly, our results showed that victims were more likely to feel sad, depressed and hopeless about the future and to have sleeping problems. Moreover, we also found that overweight and obese adolescents were at higher risk of being a victim than those of normal weight. Negative social stereotypes about overweight may play an important role in making overweight and obese adolescents a target of teasing or social marginalization. For substance use, we found a negative association between victims and cannabis use, while previous studies have reported discrepant results.7, 15 These results could reflect a general pattern among victims defined by having low self-esteem, being physically different, accepting social rules and avoiding some risk behaviours such as substance consumption.

Our results showed that aggressors were associated with antisocial behaviour and with frequently feeling tired, bored, nervous or tense. This is consistent with previous literature suggesting that aggressors display more negative and antisocial behaviour2 but also have psychological problems such as depression, anxiety or psychosomatic symptoms.2,4 Regarding substance use, our results are also consistent with other findings that identified a positive association between aggressors and cannabis and alcohol consumption.7 In addition, a longitudinal study16 suggested that being an aggressor was a significant predictor of smoking initiation in adolescents. These associations could be because aggressors are generally more self-confident and uncontrolled than other students and may tend not to abide by social rules.

Although our results show some differences in behavioural and mood state patterns between different roles, bullying behaviours were associated with health-related problems that can lead to psychological disorders in adulthood. Therefore, bullying may have negative consequences on adolescents' health for victims, aggressors and victims/aggressors. Several schools report antisocial and violent behaviours of students yearly. Specific school-based programs for bullying prevention which include training of students in social and emotional skills in order to create a positive and safe school climate could help to reduce bullying. The results of this study show different behaviours and health-related factors that characterize victims, aggressors and victims/aggressors which should be considered when developing and implementing bullying prevention programs. 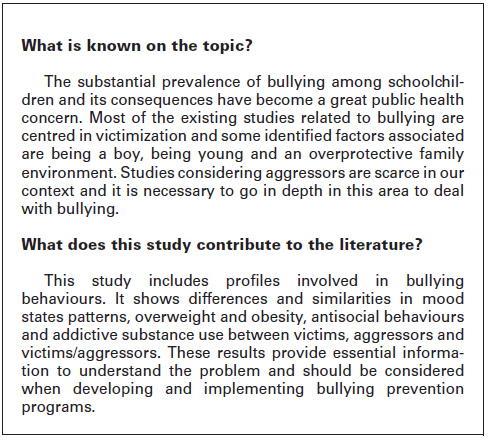 The authors would like to thank the teachers and students of the participating schools. We would also like to thank the personnel of the Community Health Service and of the Evaluation and Intervention Methods Service of the Agència de Salut Pública de Barcelona who collaborated in the administration of the questionnaires, height and weight measurements, and in the creation of the data set. This paper represents partial fulfilment of the requirements for the PhD program of X. Garcia-Continente at the Pompeu Fabra University (Barcelona, Spain).