This paper was supported by a European Science Foundation doctoral grant [grant number I3P-2005] and a project from the Spanish Ministry of Science and Innovation [CSO2011-29970-E].

Introduction: Immigrant mothers in Spain have a lower risk of delivering Low BirthWeight (LBW) babies in comparison to Spaniards (LBW paradox). This study aimed at revisiting this finding by applying a model-based threshold as an alternative to the conventional definition of LBW.
Methods: Vital information data from Madrid was used (2005-2006). LBW was defined in two ways (less than 2500 g and Wilcox's proposal). Logistic and linear regression models were run.
Results: According to common definition of LBW (less than 2500 g) there is evidence to support the LBW paradox in Spain. Nevertheless, when an alternative model-based definition of LBW is used, the paradox is only clearly present in mothers from the rest of Southern America, suggesting a possible methodological bias effect.
Conclusion: In the future, any examination of the existence of the LBW paradox should incorporate model-based definitions of LBW in order to avoid methodological bias.

The importance of birthweight as an indicator of health is well established in the literature. Low BirthWeight (LBW) is linked to neonatal and infant mortality1 and, later in life, to specific diseases and causes of death.2-4 Systematic evidence shows that immigrant mothers coming from lower socioeconomic contexts, and experiencing social disadvantages in the host country, have a lower probability of delivering low birthweight babies in comparison to natives mothers (i.e., the 'Low BirthWeight paradox' - LBW paradox).5-8 Many hypotheses have been formulated to explain this phenomenon, although they all focus on general mechanisms (i.e., selection in origin),9 unobserved confounders (i.e., smoking or diabetes),10 or cultural aspects (i.e., values, lifestyles)11 without contemplating the possibility of it being an artificial effect connected to the conceptualization of LBW.

The definition of LBW commonly refers to babies weighing less than 2500 g. Although accepted in the literature, there is no 'gold standard' to define LBW and this threshold is problematic when used comparatively.

This paper aims at testing whether immigrants have a lower probability of being LBW compared to Spaniards using both the conventional definition (less than 2500 g) and a model-based threshold (OTP), which avoids an ad hoc threshold to define LBW/normal-weight babies.

We used vital information data on births in Madrid provided by the Madrid Statistical Institute for the years 2005 and 2006 (n = 144,616 babies). We selected living singleton babies. We excluded observations without information on weight and with absurd weight values for their gestational age, based on the limits published about different populations.

The final sample size was 128,591. Migration status was classified according to the mother's nationality into the following groups: (a) the European Union and other rich countries, (b) North Africa, (c) Sub-Saharan Africa, (d) Mexico and Central America, (e) Southern America - Argentina, Chile, Brazil and Uruguay, (f) the rest of Southern America, (g) Asia and Oceania, and (h) other non-EU27 European countries.

We defined LBW using 2500 g and the model-based Wilcox threshold, which estimates the optimal truncation point (OTP-threshold) applying Maximum Likelihood Estimation to determine the specific point where the two distributions (residual and normal) converge. For further details about this estimation see Wilcox.12,13

We ran logistic and linear regressions to model the odds of delivering LBW babies and to assess mean differences.

Babies born to foreign mothers are on average 85 g heavier than Spanish mothers (Table 1). Immigrants as a whole and babies born to North African, Asian and Oceanian, and 'other Southern American' mothers have lower LBW prevalence than Spaniards according to less than 2500 g. In contrast, using the OTP-threshold, there are no statistical differences compared to Spaniards.

Table 2 shows the main results. The adjusted logistic regresion using <2500g as a threshold shows that the odds of having LW babies are 35% lower among immigrant mothers than Spanish mothers (OR2500=0.65) while 17% higher when the OPT-threshold is used (OROTP=1.17). Inmigrant mothers have babies 109g on average heavier when compared to Spanish mothers.

Newborns from the rest of nationalities show contradictory effects between the thresholds. Thus, being a newborn to a non-EU27, EU27, or any other rich country mother increases the likelihood of having LBW babies (OROTP = 2.37 and 2.89, respectively), while mothers from Asia and Oceania, North Africa, and Southern America lose their statistically significant advantages (CI-95% 0.56-1.25, 0.73-1.30, and 0.64-1.39, respectively). All immigrant babies are heavier on average than Spanish ones (βg = 96 for non-EU17; βg = 128 for North Africa; βg = 89 for Southern America; βg = 54 for Asia and Oceanic; βg = 54 for EU-27 and other rich countries).

Our results confirm previous findings observed in Spain and other developed countries,7,8,11 which suggests the existence of better (or equal) outcomes at birth in immigrants when compared with natives. This finding is observed both in the mean differences in birthweight as well as in LBW defined by less than 2500 g.

The lack of an absolute standard to define LBW not only neglects the accepted variability of birthweight distributions across populations, as well as the historical improvement around the biological viability threshold (nowadays placed at 22 gestational weeks and 500 g), but certainly affects the comparison between groups. We found that, when comparing babies born to immigrants rather than Spaniards, the presence of the paradox depends on the approach used to conceptualise LBW. Using a model-based approach, the positive outcome disappears for newborns to non-EU27, EU27 and other rich country mothers. However, the LBW-paradox persists in other populations no matter how LBW is conceptualized. We included all the other immigrants in the advantaged group since 'the paradox' lies in the existence of equal or better health outcomes.

The fact that for some specific nationality groups, the LBW paradox seems an artificial effect poses an important research question. Following Wilcox's explanation, the less than 2500 g does not capture properly the population at risk (LBW) but is biased by the average birthweight.13

As it is well established in the literature, the distribution of birthweight is characterized by a mix of two distributions12,14,15: the 'Gaussian distribution' (i.e., normal birthweight) and the 'residual distribution' (i.e, the LBW population). This feature is what would enable us to identify, from a continuous anthropometrical measurement, a dichotomous health indicator at birth (LBW vs. normal birthweight). The existence of two distributions with different characteristics and associated risk factors implies that they are mathematically independent. In this regard, it is necessary to focus on the specific intersection between the two distributions as the exact point where they split up (OTP). This optimal truncation point should be the threshold which captures the LBW population (residual distribution). Any point placed above this optimal point will induce a bias in the identification of the LBW population insofar as it will capture the parameters of the main distribution (basically mean differences). This bias is what occurs in our data when using the 2500 g as the estimation to capture the mean differences, where immigrants are actually heavier than natives, rather than the compromise LBW babies. A model-based threshold is, by definition, valid only for the migration classification use and for the period under study, since it may change as the population changes. A model-based threshold can be derived from any social group with associated socioeconomic and risk factors (i.e., a target for public health intervention, not a genetically homogenous group). This condition can be questioned in some of our categories, which may be very heterogeneous.

In summary, our study discusses the implications of using the conventional definition of LBW based on less than 2500 when comparing populations with different birthweight distributions. Using a model-based definition of LBW, we found that for some groups of nationalities the previous advantage reported in the literature might be due to an artificial advantage.

Editor in charge of the article

Juárez had the original idea and Juárez and Ploubidis contributed to the design of the study; Juárez performed the analyses. Juárez wrote the first draft of the manuscript, and all authors made substantial contributions to the interpretation of the results and manuscript revision. All authors approved the final version of the manuscript.

The authors have no conflicts of interest to disclose. 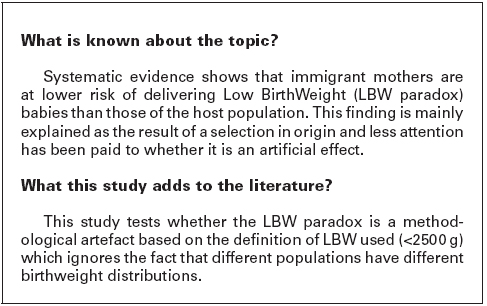 12. Wilcox AJ, Russell I. Birthweight and perinatal mortality. I. On the frequency distribution of birthweight. Int J Epidemiol. 1983;12:314-8.